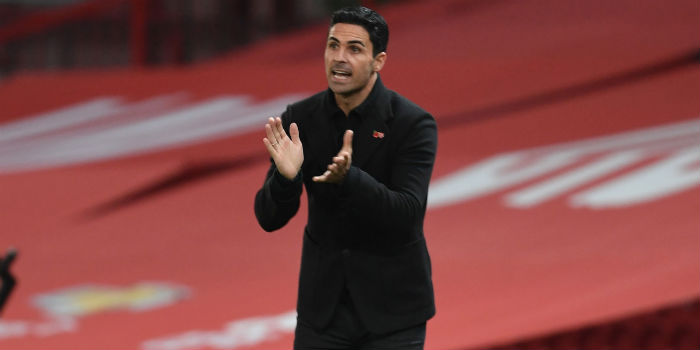 Mikel Arteta is excited about supporters returning to the Emirates and thinks their support can help get his side out of their current funk.

In line with government rules, 2,000 ticket holders will be allowed to watch tomorrow’s Europa League clash with Rapid Vienna; the first time home fans will have been part of an Arsenal matchday experience since the 1-0 win over West Ham back in March.

While we’re still a long way from normal, the stands being speckled by a small number of socially distanced punters grumbling away at an out-of-form team will at least remind everyone of the dying days of the Emery era.

Just kidding. It’ll be great. Assuming you’ve got a ticket.

“It is going to be extraordinary to have them back, it will feel strange,” said Arteta when asked about the long-awaited return of fans.

“The club has done amazing work to facilitate everybody at short notice to be able to attend the stadium and I am sure it will work really well.

“I am feeling sorry as well for thousands of fans that I am sure would like to make it, but can’t be there.

“We are ready to host as many as we possibly can. It is going to depend on how the pandemic develops, and the new measurements when we start to open things up a little bit and see how people react to that. Hopefully we can do that.

“Who knows how it is going to develop? What we can do as a club, we will do to our maximum obviously.”

Arteta also rejected the idea that being within earshot of dissatisfied terraces could prove to be a double-edged sword. Mind you, he’s calling on those in attendance to get behind his boys.

“I really miss them,” he said. “We can talk again about the difficult moments but when we had really good moments, with them it would have been even more special.

“That would have generated a connection with the team because they would see live what we are doing. We didn’t have that opportunity to do that.

“I can only see positives [in fans returning] and I expect them to be very supportive of the team. At the end of the day, it’s the only way to get out of this situation. It’s not a secret.

“When you see the top teams, the stable teams, the teams that win trophies, how they act and how they’re supporters act towards the team…name me one where they’ve gone against the team. I haven’t seen it.

“The only way to do it is with them. We need them. We need them to be with the team. And then of course, they have to be demanding as we are with our players. But when they are in the moment on that pitch, support them.

“That energy is going to give them a massive lift and a percentage to increase the level individually and collectively to the team.”

When The Telegraph’s Sam Dean pointed out that Arteta has now managed twice as many games without fans as he had the chance to do with supporters in attendance, he added: “I want to manage a football team with fans, where you have all the ingredients that are necessary in football to get out what you want from a team.

“There are a lot of aspects within a team, within a club when your fans are together with you.

“I’m desperate to have that experience again. Unfortunately, there’s nothing we can do about it. It’s great news for us, even if it’s slowly that they return to us. Still, they can start to participate in our games.”

I can’t wait to hear our fans singing again! I think tomorrow is the perfect opportunity for us to have fans returning too as opposed to the last horrendous home games

He speaks a lot.

That’s what good leaders do, they communicate.

Some of them you wish don’t speak at all. But in case of Arteta, looking at our home form, maybe there is some merit in what he says. We were setup like an away team, and in home games fans might have helped.

If it’s support he wants they better pick the chosen 2000 meticulously . And might II suggest play some more Experian’s expansive football to up the entertainment value. The villagers are restless. He

Stupid spellcheck.. I give up.

Will Ozil be there…

Give us something to get behind! It’s not our job to score goals.

Out with Arteta. Your football is rubbish. Talk when you start winning home games. The fans will slaughter you with the shit show you give them every week.

Well, if we have a “full house” in PL games that will represent around 3% of capacity so they’ll have to make a hell of a din to make a difference – or even heard, given the acoustics at The Emirates. That said, given the number of times Arteta has been going on about the lack of support in the ground being responsible (in part) for the team’s poor performance, something apparently unique to Arsenal, every % will be helpful.

I don’t think he’s said that lack of crowd is responsible for the poor performance, it’s obvious that that is down to the players being flakey bums…
I heard the “crowd” at Old Trafford booing their fans last night…if anything the accoustics made it sound a whole lot worse lol

Haha,nice one Arteta, worried the fans might not be happy.