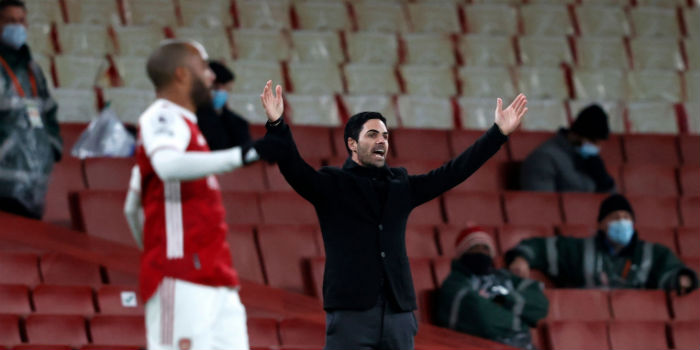 Mikel Arteta says the absence of Willian and David Luiz from the Arsenal squad that beat Chelsea 3-1 was not related to the Covid-19 scare that has forced defender Gabriel into self-isolation.

Instead, the players who were fit to play gathered this morning after a few extra Christmas hours with their families.

“We have to follow the guidelines and protocols with Covid, the doctor is on top of that,” said the boss when quizzed on Gabriel missing out.

“For how long? We are not 100 per cent [sure] but he was in contact with somebody who has tested positive so he has to stay away for a few games.”

Arteta went on to confirm that the diagnosis wasn’t as a result of contact with Gabriel Jesus against whom the defender had played on Tuesday.

“No, it wasn’t with another player in the Premier League. It was someone in his bubble.”

On David Luiz and Willian, he added: “No, that is for some different reasons. They were having some symptoms, and we have to be really cautious when that happens.

“The protocols say that they have to stay away, they have to test negative but still we have to be really careful we don’t pass that into the players until we are 100 per cent sure they don’t have it.”

Arsenal face Brighton in three days time, so we’ll likely get another update in the next couple of days.

Unfortunately, it doesn’t sound like we’ll be able to call on Thomas Partey for Tuesday’s trip to the AMEX.

“Not yet, he hasn’t started to train with us yet, so he is still a few more days away,” confirmed the boss.

Wish them good health and an extended leave for willian

I CANNOT WAIT for Partey to get up and running. Hope he can stay fit and prove his quality over the second part of the season

The worst signing in Arsenal’s history – even worse than Mustafi.

Kinda wondering if Luiz and Willian’s “illness” is that they’re acting like complete and utter fuckwits in training, and he’s just excluded them from the squad.

But not of Nelson.

I was actually hoping he would say something along those lines. I don’t wish them ill, but I don’t really want them back in the lineup either

The Arsenal
Reply to  NZGooner

Luiz while mediocre is nowhere near piece of shit Willian.

I hope they quarantine till their contracts end

Complete coincidence that a bunch of Brazilian footballers in London get covid/feel unwell the day after Christmas. Mmm hmm!!!

Exactly what my non- Arsenal supporting brother said. Probably had a whale of a time at the local Rodizio!

I’d have joined them just for those cicken livers they bring round on occasion. They’re to die for!

I for one believe EXTREME CAUTION is required with Willian.

I don’t understand why the players have to stay in a hotel the night before the game, surely it’s easier to meet up at the training ground in the morning?

It’s to do with ensuring undisturbed sleep and meal preparations.

“They didn’t play because:

There. Fixed that for ya.

I thought Willian had been absent since Fulham anyway? 🤷🏻‍♂️

By all means extend Willian’s absence indefinitely. The other two can come back.

so basically his win today was not due to his master genius plans of dropping shite players like Willian, but due to luck.

Partey ‘still a few days away’ is pretty good news.
If we add his midfield mastery to the zest of the young trio, Tierney and the work ethic of Laca, our move up the table will be more rapid.

Not much of a miss Willian. Luiz maybe still mistakes from Mari and Holding today but if we persist with a settled dup at the back, there is merit in developing a little better telepathy which will otherwise be difficult with too much rotation. Gabriel though IMO with Mari or Holding will be useful given his speed. So hope he comes back in. Rotation is going to be critical particularly sheperding now critical catalyst in Martinelli. BUT getting a supporting set to deliver close to same energy levels at least plus nuance will be the difficulty. Again Pepe on today… Read more »

I think this Post sums most things up nicely.
Martinellis energy has made a massive difference his movement in a couple of starts has been greater than what more experienced players have done all season.
Other players spark off the energy. ESR did really well but too much pressure to expect him to do it all the time. Good option so should make the bench
Xhaka was top today, scored one & great ball for KT to win pen.
Mo played some poor passes when trying to move the ball forward but did ok

Willian and Luiz should be quarantined for the rest of the damn season.

I don’t think we should take any chances, so Willian should be kept safe and quarantined until COVID-19 is completely eradicated.

We wouldn’t want any bubbles bursting, now would we.

“The protocols say that they have to stay away”

This should be in your manager manual Mikel

Gabriel can be welcomed back with open arms.

The other two can make the tea lady’s tea.

A little break might do Gabriel good. He has played basically every game since arriving, in a poor team. A couple of games off to clear his head may be what he needs. It also presents an opportunity to Mari to show what he can do. At least we aren’t dipping into the Kola/Musti bin to fill the gap

No longer need them