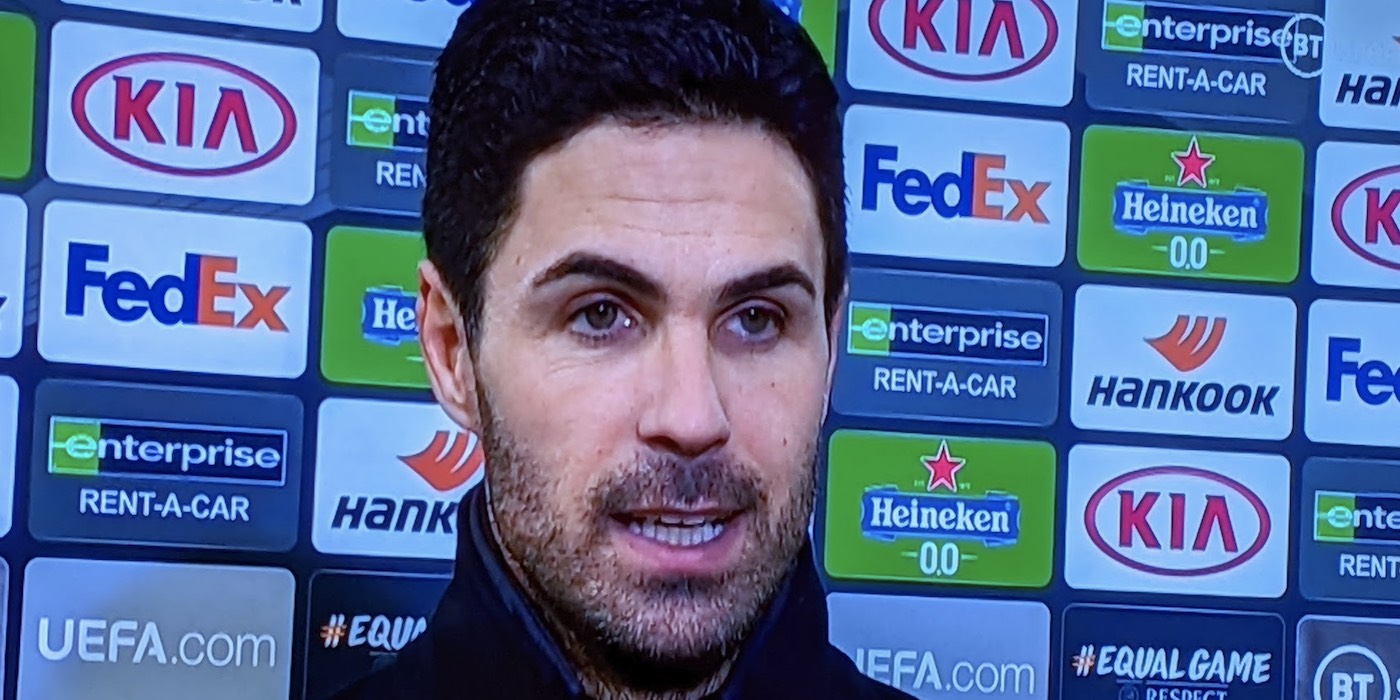 Mikel Arteta spoke to BT Sport after tonight’s 4-1 win over Rapid Vienna in the Europa League. Here’s what he had to say.

On a good night for the team and the fans …

First of all, we’re delighted to have the fans back, they make a huge difference. We have 2000 but they were loud, supportive, really helpful, so thanks a lot to them for coming and making the effort.

The performance, right from the start, the boys wanted it. They were hurt by the defeat in the previous game and they showed the attitude and desire that is required to play.

And then we were really aggressive with the ball, we wanted to put the ball in the box, we arrived with numbers, we created many chances, and now we have another game on Sunday.

Why have performances been different in the Premier League?

I think the aggressiveness is still always there, it’s the margins in the Premier League are much smaller. So the moment you make a mistake, which we made in the first half, you pay the price big time.

Then we haven’t been as efficient in the final third and probably as ruthless in front of goal as we have been in the Europa League. These are moments which will change but I really like the reaction of the team today.

I’m delighted for Calum and Pablo, they’ve been out for so long, many months working with the physios, glad to have them back after such a long time. They felt really good so another two players to add to the squad.

Laca, great to have him on the scoresheet and some great individual performances, and great to see some young boys on the pitch as well.

The club has done so much work to make sure everything was set up the right way to host them. Hopefully they have a good night, they were tremendous with us.

Any players from tonight in his thinking for the derby?

Yes, we’ve seen that in the past that a lot of players who have played on Thursday play again on Sunday, they’ve had some strong performances in the Europa League, so we’ll see what’s the best team to face Sp*rs now.

Arteta maybe should release the handbrake a bit and let the players express themselves.

I believe he will now, not only is it better to have his plan drilled(like it is now) before letting them stray from it. But also now we are in a bit of a slump he has to roll the dice.

Yes ofcourse ! It’s important to a bit express yourself and get the momentum back.

We need to syop this stupid tactic that you have to go wide every fking time you attack. It slows down the game and our opponents get time to re group and back the box. Every time we have the ball it goes wide, then back, then wide, then bunch of pointless traingle passes, and finally if we are lucky a sh*t cross in the box. Stop slowing the attacks down with this stupid tactic. Be more direct, take risks, be unpredictable.

Thought Mari did well on his first day back, some nice passing thorough lines. Nice to see Rob Holding waiting to go down the tunnel with him at half time also. Maybe some medical room bonding went on.

Let’s be honest, it’s more the opposition than the fans.