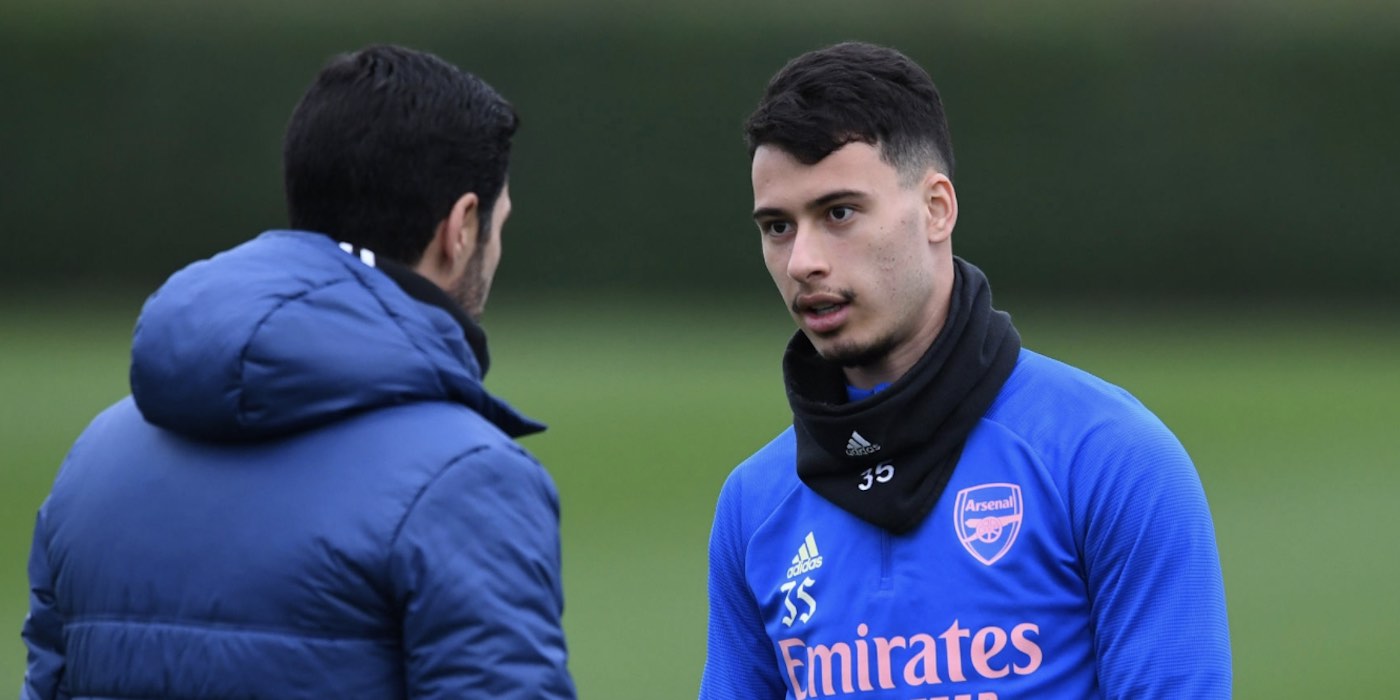 The 19-year-old Brazilian, who has been in full training for a couple of weeks, completed 45 minutes with the under-21s on 9 December and looks set to play for the under-23s when they face Leicester at Meadow Park this evening.

Assuming he comes through unscathed, he could well make the bench for next week’s Carabao Cup quarter-final with Manchester City. With Premier League clubs voting to increase the number of players named on the subs bench from seven to nine for the rest of the season, he could well be an option throughout the busy Christmas period.

While Arteta used Martinelli sparingly in the weeks prior to the UK’s March lockdown, the striker had already made a big impact in his debut season at the Emirates scoring 10 goals in 26 appearances.

Ahead of Saturday’s clash with Everton, Arteta revealed: “Gabriel Martinelli is very close to being available and fit to be part of us as well, which is great news.”

He went on to lavish praise on the youngster for his attitude in training: “Gabi is pure enthusiasm, energy, belief, charisma and goals. And this is him.

“He’s around the training ground and he’s around our training sessions and the energy is different because he goes 100 miles per hour.

“He’s got this passion and his way of playing and he is a threat. He’s a player that we’ve been missing because he brings something special to the team.

“He’s contagious with his attitude and I think it’s going to be a big boost when we have him.”

Can’t wait for a fit Gabby to return to the 1st team – won’t solve all our problems, one player could never do that, but a step in the right direction 🙂

Yeah, he’s just such a lovely type of player. THAT energy 👊🏻

Could he play on the left, auba middle and saka in midfield?

One player could. I see Mikel going full Fergie and throwing everything at Martinelli like CR7.

He hardly started him when he was fit.

With him and Saka on the pitch regularly we stand a far better chance of playing well. Who knows, we might even win a match.

What is this thing ‘win’ that you talk of?

In all seriousness, I’m delighted to hear Gabi is close to a return. Really exciting talent.. I just hope that when he returns and he inevitably takes a few weeks to get up and running (in a team playing poorly also) that folk don’t get in his back if he isn’t the silver bullet we are hoping for.

whats arteta on about ,he never played him before his injury, he was flying it before arteta got the gig and then benched him

Martinelli was flying in the Europa League and cup competitions, he only played a few Prem games under Emery, Lungberg and Arteta. We need to give him time to come back from injury and adapt to the Prem. I hope people don’t overhype him and expect more from him. He’s still young and a lot to learn. It will be great to see him playing again.

Arteta very much saw him as Aubameyang’s understudy at LW. When Aubameyang was banned, Martenelli came into the side in that same position.

Play your heart out when you get a shot

As I said before this is a myth. Martinelli started and played in more PL games under Arteta than Emery…but for some reason people have decided that he never played him…just weird and wrong.

Excellent, be good to see him in the starting lineup soon. You know he’ll at the very least give it his all. The lad can also finish if we manage to create a few chances here and there.

A Voice in the Noise
Reply to  PGunner

He’s good with his head as well though, so he can propably nick a few goals from the crosses we put in!

Avo84
Reply to  A Voice in the Noise

Forget ar good he is in the air

Great news! Maybe arteta is coming around on Martinelli, I really do believe martinelli and Saka will become top class and both of them seems to really care about the club and the teammates, class and the right attitude at that young age is uncommon.

Hoping after some more minutes for the U23s Martinelli might feature in January, possibly for the FA Cup game, fingers crossed

Looking forward to seeing some of this 100mph action. We’ve been chugging along well below the speed limit so far this season.

Agreed, but we still need more pace and dexterity in the midfield, and Martinelli can’t fix that for us … yet!

Indeed, the midfield is more clapped out Robin Reliant than purring Lamborghini at the moment.

Even the new moving truck has had wheel problems since we got it.

Recently I’ve realised that Arteta just loves to talk absolute nonsense. He never played Martinelli, so why would that change now? Arteta has favourites and there are a number of young players that will never do enough to make it in the first team while Arteta is at the helm. It’s a shame really because I was so supportive of Arteta when he first came into the job.

Then don’t believe the stuff you’re writing here and get back to that supportive feeling. He doesn’t talk nonsense, but it is difficult for us to read much meaning into anything he says because we are playing so poorly. Arteta does have favourites, as all coaches do, and I think Martinelli will be one of them.

Who knows? Martinelli’s injury may had been due to a psychosomatic cause. We fans was all stressed out because Arteta wasn’t playing him. Imagine the torture the boy was living through.

Scientists are yet to discover a link between feeling wanted and knee cartilage durability We shouldn’t be playing teenagers game in, game out. It’s such a risk, I can’t believe we haven’t learn our lesson yet with that. I’m a bit concerned by the amount Saka plays for us and England rn – not cos he’s isn’t playing well enough, but because he could so easily pick up chronic injury problems while his body is still growing (especially with the amount of tackles and fouls he takes) There’s also the argument that overplayed teenage prodigies tend to flame out earlier… Read more »

As long as MA plays him.

gabi, PEA and Pepe with Saka behind them – then have AMN and Partey holding with a back 4 of Tierney, Gabriel, Holding and Bellerin

Martinelli is fun to watch and we need some of that!

Auba cannot score, Laca cannot even kick the ball to score, Nketiah finds himself glued to the bench. So, now hope is named Martinelli. Where, when and how will we get to play is unknown, but good to know, we have one more initiative left, when three ahead of him fail. We have 40 players in the squad, so my advice to Arteta is find 11, who can perform in the league, and not just share hope. Before people start blasting me, Arteta has bought Mari, Gabriel, Cedric, inherited Saliba, extended Luiz contract and still we ship in more goals… Read more »

Why the hell didn’t Arteta play him at the end of last season when we had a chance to get into the top four, Arteta team selection is awfull. Balogun will sign for a European club in January because Arteta won’t give home minutes, he’ll be another Gnabry.

Will be very interesting to see how he’s used when he’s at full fitness. Best position is probably at LW, but that’s arguably Aubameyang’s best position as well, contrary to popular belief. He could have an enormous impact on the shape of the team and the prospects for Saka, Nelson, Nketiah etc.

June 20, Brighton 2 – 1 Arsenal. Martinelli was on the bench, unused sub (Özil too…). I can’t help but think that Özil + Martinelli would have been great assets to win the game or at least to not lose it. Words are great, acts better.

Truth be told, the main miss link is Ozil, but unfortunately he’s in the freezer till the end of the season to be released to move on with all the talent the club decided to waste. WOW ( £350.000 a week). LOl

‘What would you like for breakfast Alex ?’
‘Eggs…… I wonder does Ozil like eggs. He would definitely be more creative at making eggs than you’.

This season does have a very Monty Pythonesque feel about it.

Arteta: “Martinelli return is a big boost.”Arteta: Plays Willian while Martinelli sits on the bench for 90 minutes. Just wait and see!I’m still upset about how he benched him after delivering immense performances before his injury…

This is great news but the challenge will be playing both him and Saka together. They are both at their best when playing on the left of an attacking three. So how will they fit together?

Most valuable player at the club, bar none. Welcome back Gabi.

You can see the effect his mad enthusiasm has on teammates. Alexis had that too, and it carried the whole team for a while.

He can be pivotal for us. Really looking forward to him coming back into the squad. As much as Nketiah has been decent in minnows europa league stage, he looks a bit lost on the big stage in the PL. Martinelli looks like the sort of player that can dove tail with Auba on the counter. He’s so direct. A bit of nifty foot work also key, something we lack. Its strange cos I’d expect Pepe to have this and Saka has shown some too but the former lacks confidence the latter is over relied upon at times to make… Read more »

The idea that he didn’t play under Arteta is nonsense and it needs to stop being spread around. Martinelli played more PL games under Arteta than Emery and Freddie!

Nonsense is looking at static numbers without context.

Under Emery he was eased into the first team but by the time Emery left he was pretty high on the pecking order, on course to 2k+ minutes, just like Saka. That is shown by the high numbers under Ljungberg.

Then Arteta came and froze him. Half of those minutes only happened due to Auba’s ban and Saka already being used at left back.

He should be played centrally IMO.

You can think that he didn’t play him as much as he could but it was nothing to do with being frozen out…he was trusted enough to step in when Auba was out with his ban and he returned to the team against Burnley alongside Auba and didn’t exactly rip up any trees!