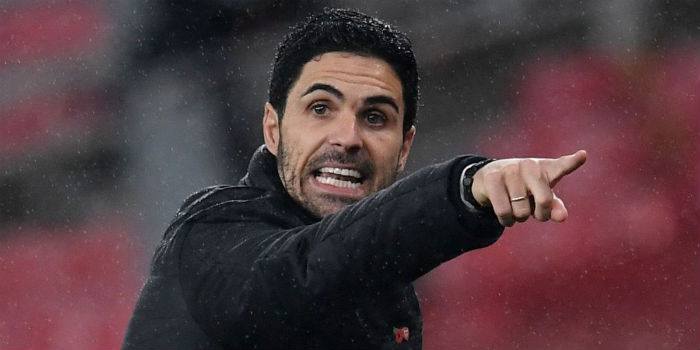 Mikel Arteta says the margins between success and failure at the highest level are small and that his Arsenal squad must stay humble and keep learning from their mistakes if they are to improve.

Off the back of silverware in the FA Cup and Community Shield, hopes were high that the Gunners could close the gap on the top four and secure a return to the Champions League.

After starting the season with successive victories, we’ve since been left rattled by a run of five defeats in eight games and currently languish in the bottom half of the table. With goals hard to come by and our player suffering from a mental block in the final third, it’s obvious that confidence has been hit hard at an important moment in the season.

Ahead of the North London derby, Arteta tried to rally the troops by reiterating his belief in hard work and patience and stressing his willingness to fight for his project.

Asked in his pre-Rapid Vienna press conference whether he’d spoken to his players about the recent stutter, he said: “Our process has to be reviewed constantly with what you do, what we’re trying to achieve, why things are working and why they’re not. Or if things are working, why the results are not working. I think if you focus on just one thing, you can get carried away and not look from the focus that is needed.

“I was certain that we would have moments of adversity and they are necessary. You learn a lot from moments of adversity. The challenge in a moment of adversity in this industry is how you react to them. You can become impatient and get frustrated and when you share that frustration, it obviously brings a big lack of confidence.

“For me, the dream that I have with the love that I have for this football club, is to achieve the level that this club deserves and build a project, but believe me, it takes time and this not a month or three months.

“This is time and time and time, and a lot of good decisions and a lot of support. This is where we are and I’m ready to fight. I’m ready to fight all the way through because I believe that we can do it. We are going through difficult periods, we will see who responds, who doesn’t and how we react as a club through different periods, and how we stick together when things aren’t going well.

“When things are going well, it’s easy. Everybody wants to be there on the front pages, on the TV celebrating, being part of something, but unfortunately, at the moment we aren’t that good and the lines are really thin. We need to be really humble and understand that these are thin lines, but if we do it, we can compete against any team and we’ve shown that.

“We’ve shown what has happened against certain teams over the last five years and what we’ve been doing against big teams in the last 12 months, and it’s not because of me or something easy. It’s because of the belief, the trust and the response that every player had in their reaction.

“It’s no surprise that we can compete against any team, but our reality today is that we can also lose against any team, and Wolves with what they did, they won against us. It happened the same against Leicester. With thin margins and who deserved it more or less, at the end of the day, we lost and there are certain things that have to be corrected straight away, but unfortunately, sometimes they take time.”

These are obviously testing times for an inexperienced manager. You certainly can’t blame him for trying to manage expectations. He did much the same when we were winning matches.

He’s impressive, just need the team to match his words.

But surely it’s up to him and his staff to motivate the team to do just that. It isn’t a case of the manager/staff on one hand and the players on the other. If it is, we’ve had it.

He is no kane

If there was a league table for expressiveness of communication, Arsenal would be right at the top.

Everton would be at the bottom.

Haha! 🤣 So true. Maybe we should abandon the league and do it like this! Champions! 🏆

I fear he’ll have to fight all the way. He hasn’t had a fight like the one he has on his hands here since joining Arsenal and as the article mentions, he has no experience to fall back on. Not his fault, but a fact nevertheless. The “managing expectations” point doesn’t really hold up now I think. We haven’t been anywhere near great in the PL for more than several seasons, we all know that, but we are currently breaking all sorts of the wrong records. A great deal of money (for Arsenal) has been spent but with nothing to… Read more »

We’re coming up on a year in charge for Arteta. The big things I would like to see to call this a “successful” season regardless of results are a defined style of play – we need to move to being the aggressive attacking team he keeps saying he wants to be & a clear demonstration from Arteta that when players don’t suit what he needs he is willing to move on. Young players really haven’t gotten much of an opportunity under him if there is a senior option available. The young players that are playing are ones that really broke… Read more »

Xhaka is a DM. Just a championship standard one.

I really really want arteta to succeed and that’s why i am not thinking of going against him like so many arsenal fans. But the only thing that worries me the most is that we have almost played 32 pl games under arteta and dont have an identity.
We dont park the bus nor we play attractive football. We play as if we just field 11 players on field and hope they find some way to score.

I think you missed it along the line we have played fantastic football over the time when we defeated Chelsea,man city and Liverpool but this is where the inexperience comes in to work against arteta and I believe he will learn soon. You don’t change a wining tactics and that’s what he’s suffering this season. Let’s go back to our 3-4-3 or 3-5-2. We don’t care but to win either fine or rough what matters is the 3 point.

And after you find the way to win rough you create a winning mentality, then comes the creative side 👍👍👍

We do have an identity but it is in the process of maturing and changing shape. That identity is rather straightforward, and used by a number of other clubs: we prioritize defence first and employ wingbacks in tough matches (often away from home, but not exclusively) and aim to utilize our speed up front to counterattack (in these matches, we gladly cede possession and aim to minimize the quality of the opposition’s scoring chances while hoping to make the most of our own). This became our dominant style, one that brought us a trophy and some big wins along the… Read more »

Even though the frustration gets the better of me sometimes, I think you are spot on. You sir have calmed my nerves and thoughts.

Take care of you guys!

Brilliant post and should be bore in mind over the next few months. There are a lot of players on the way back too.

But In the short term we look so vulnerable

If i could ‘thumbs you up’ more than once, i would. Well said!

well said, some goof mf’s and we might actually see some real football.

You’ve put my thoughts into better words then I could.

A few weeks back I was confident our back five could shut out any team in the league, not so sure presently about our back four.

Like a wise man once said, “building confidence is like moving up a staircase but losing it is like coming down with the lift” In this case it’s my belief

Bla Bla Bla. We don’t pass the ball. We don’t create chances. We don’t shoot on target. We don’t score goals. We don’t win
It is Artetas fault.
We used to play and have fun. Now we lose and we don’t have fun.
Get out.

“We used to play and have fun” when? In the half season Arteta brought joy basically for winning again? Because before that, it’s been quite some time since we had fun.

You don’t have to fight, sunshine.

You just have to use your noddle and play your best players available to you – preferably in their best positions.

I know we are shit, but it’s either we believe him or not. It’s either we believed him before or didn’t. And it’s either we believe IN him or don’t. I happen to be the now 10% of arsenal fans that can answer yes to all of those, and plan on riding out this shit form. What I’m fed up is our supporters. Not that they are fickle reactionaries, all supporters are. It’s how deeply hypocritical they are. How can we say on one hand that this season will be strange and not reflective of the standard, and say that… Read more »

I vociferously agree with your bodacious and honest assessment.

Which project are you talking about Arteta? Your project is not convincing enough. Lol

Gabriel is left footed, he’ll never play on the right of a back 3.

Arteta says to learn from mistakes, but he’s not him self, he says he picks the team each week on performance based, so why does he insist on playing XHAKA ,BELLERIN , WILLIAN when their not performing week after week,

I am ardent and amenable as I await Arteta combining the best of his epigrammatic media presentations with much more gnomic performances on the pitch. COYG!

Arsenal need new creative midfielder (10) neither they have to return Ozil back to duty, it’s very clear his missing in action

Sorry, Arsenal fans are shite. No wonder Arsenal Fan TV thrives – with fans like ours, who needs opposition.

It’s not even a third of the way into the season. Calm yet tits, its gonna be alright. For once, I’m glad the stands are empty, because our hypocritical fans will make the atmosphere worse at this point.

Any one find it ironic that worse 8 or 9 years of the clubs we have won 4 fa cups got to league cup final and a semi final which are best cb got injured in the game I think we would have beaten aletico madrid, and then final with Chelsea. You do have to wonder what gose on with this club keep talking about fight even with the 2011 or 2007 squad it get to the point where just excuse for being incompetent

Many explayer pundits have been offering all kinds of advice. Some of them
were ex managers who were sacked .So stop dishing unsolicited advice.
Arteta knows the match against Spurs its a must not lose game let alone win.
I believe he doesnt know his best 11 and his constant shuffling of the pack is a big problem.
Spurs have not lost for along time. Its about time Arsenal do them the favour.

I’m trying to ring you man pick up