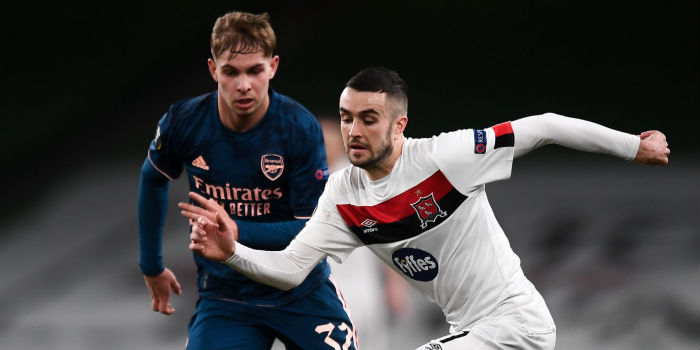 Mikel Arteta was impressed by Emile Smith Rowe’s performance against Dundalk, admitting the youngster coped well with an unfamiliar position.

The 20-year-old played 77 minutes of the Gunners 4-2 win in Dundalk and was a lively presence on the left-flank where he dovetailed well with wing-back Ainsley Maitland-Niles.

Having come off the bench to score in last week’s win over Rapid Vienna at the Emirates, Smith Rowe will now be hoping to stake a claim in matchday squads for upcoming Premier League games.

In his post-game press conference, Arteta was asked about the midfielder’s performance and progress.

He replied: “He hasn’t played many games, he played in a position that doesn’t suit him perfectly for his qualities but you can see that every time he’s around the ball that something is going to happen.

“He has a lot of creativity, he’s a player that has the quality to receive the ball and do things in high-value spaces when things get open. He’s a threat and I’m really happy with his performance.”

Arteta was also asked if Eddie Nketiah might get a chance to start in the Premier League after notching his fifth goal of the season in tonight’s 4-2 win. In a spiky mood, the boss took umbrage with any suggestion he hadn’t given the youngster enough opportunities on the domestic front.

“He has started [in the league] and he has the possibility to start again, as you said.

“He’s a goal threat, he’s a player that always is very close in every action around the box. He’s lively. He’s got the hunger and he’s only satisfied when he scores. So he’s an option, for sure.”

Mikel talks about football like my mates who play online talk about poker.

Which is good; thinking about the game analytically and in terms of the expected value of actions is the right way to approach it.

I guess his mates also talk about discipline play and strategy etc, and then go all in after flopping top pair .
Much like mikel talks, and then starts underperformers.

Well Arteta had better not be a ‘flop’ or the fans might ‘turn’ and sell him down the ‘river’.

Yup. I went there.

“He’s a goal threat, he’s a player that always is very close in every action around the box. He’s lively. He’s got the hunger and he’s only satisfied when he scores. So he’s an option, for sure.”

He talks a good game.

But that, unfortunately, is all there is from him at the moment.

That literally could be said for every single Arsenal player this season.

He hasn’t played Leno out of position yet!

uh….he was in the Dundalk half of the pitch during the match. You sure about that? 😉

Work in progress. He was OK and getting better with games. Its critical we find him game time or have him out on strong loan after the new year.

BUT all this circle jerking over some players bc they beat frankly a very mediocre team needs to get a reality check.

Happy we won today, entertaining enough but the business end and a very different skill set needed for this weekend.

What’s with you and all the wanking comments? When the season has been shit let us enjoy a few bright spots.

He seemed to be in a spikey mood in general.His reaction to the crosses question was funny.

15th in the table and the first team are serving up rubbish on a weekly basis. He should be expecting all manner of questions from the media. He’s certainly got bugger all to be spiky about – this is his mess, no one else’s.

We’re the ones who should be feeling spiky!

eh, but it is patently *not* just his mess. he has inherited a completely broken squad. whoever took the job, it is going to take time to turn this squad around. in arteta’s case, he is a rookie coach who is going to make mistakes so we have to be patient. we all knew this when he was appointed. i find it unbelievable how quickly so many arsenal fans seem to turn on the manager of the day just because we are not immediately winning everything in sight.

I’m sorry, but this ‘he’s only a rookie manager ‘ doesn’t wash anymore.

Is the man on a ‘Rookie Manager’ salary…?

You can bet your last penny he isn’t.

This is Arsenal Football Club, not The Mikel Arteta Managerial Development Project. It’s a warm old kitchen and if he can’t stand the heat, he should do the decent thing and walk.

What ever Willian can do, ESR can do better.

Even if he can’t, I’d still rather watch him try

Except fatten his bank account – ESR needs a bosman for that 🙂

Or a certain agent more likely

Whatever Willian can do, my missus could do better.

Yep. I hate getting on the hype train about young players but ESR has probably been our brightest talent for the last 5 years. He had a cracking loan spell last season. He needs to stay fit, otherwise I just don’t understand why he isn’t warranting game-time like we readily give to Eddie and Saka – ESR could be better than both of them, that’s no exaggeration. And he has an ability to link the gaping holes between our midfield and attack like few others can in our squad.

I’m not quite down that road yet, but the car engine is on and warming up….

And never plays him. LOL.

Of all the current crop of academy players I would keep Saka, Smith Rowe and possibly Maitland-Niles for his versatility. Too early to say for Balogun, but he’s promising too. Macey, Nelson, Willock and Nketiah will go on to have decent careers and they are nice young guys but they are simply too lightweight for a team of Arsenal’s stature. You can probably add some of the lads who are out on loan at the moment as well like John-Jules. Cash in and reinvest in players who are Champions League level.

Why ditch a load of talent when its been the best thing about Arsenal this season? Macey is clearly not trusted, but the others are still improving and its too early to know where their true level is.
Cash in for a few £million and watch them become the next Gnabry or Sancho. Then pay £50 Mill+ for one established talent who ends up doing nothing but drawing a fat pay cheque. No thanks.

I say start all the hungry young players for EPL and put all the underperforming and overpaid international players in the Europa League. Then Arsenal will start producing good results. Why are we keep thinking of buying you g players from other clubs and yet refuse to give ours a chance to play? If the senior players are performing, fine. But they are not and it is now time to give youth a chance to shine. Let’s us be the Ajax of the 90’s.

It is only too late if we refuse to try.

I’m sure every week Arteta says europa league players have a chance of the first team, and every week they are no where to be seen at the weekend. I have zero doubt Willian and Xhaka will start Saturday. Its a shame because the midfield we had tonight worked and Auba might actually get a chance to shoot.

he should have started Macey in goal for this match

Hmmmmm, is anyone else already wondering why he’s still going to play Xhaka at the weekend?

You know what? I said on this page, before the defeat to Spurs, that it was too early for this lad to be given a run in the so-called first team. However, there really is only so much more of Willian, Xhaka and Ceballos stinking the place out that my otherwise rational patience can stand. Fuck it, give the lad a go. I mean, I get it, what is there to be afraid of? How can he perform any worse than the midfield clowns we’ve got out there at the moment? He might actually just create something that leads to… Read more »

Dropping Xhaka was a mistake. He was the glue holding that team with precious little reaching our CB’s. Bringing him back for the last three games when confidence got shot was not enough, and giving him advanced role again a mistake. Tierney and Saka were getting decent supply along with Auba, but that went to s**t when Arteta changed things around from the off. It should’ve been stronger this season with the addition of Gabriel, our left side of pitch, but somehow Arteta has tangled the net and now he’s trying to put fires out again. He’ll probably go back… Read more »

Dropping Ozil was the mistake. But hey-ho, spilt milk, time to move on.

If Arteta lacks the humility to play Ozil in January (and he does and he won’t, respectively) then he needs at least to give ESR a run alongside a fit again Partey in the new year.