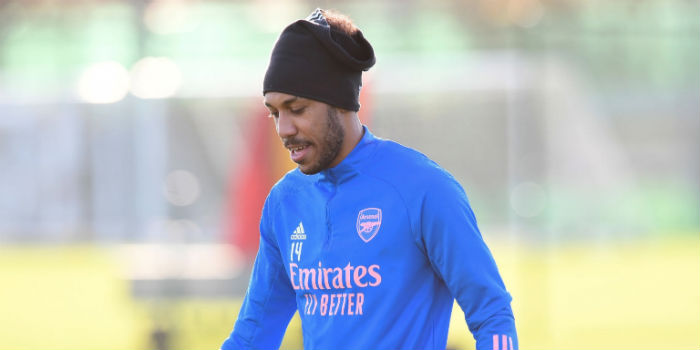 Mikel Arteta says captain Pierre-Emerick Aubameyang is not ‘undroppable’ but he insists critics of his current form should remember what the striker has done for the club in the recent past.

Since joining the Gunners nearly three years ago, the Gabon international has been prolific in front of goal. That was, until this season.

So far he’s only netted four goals in 13 appearances and with his teammates so reliant on him to lead the way, the drought is taking a toll on results. Even a switch from playing on the left to a preferred central role hasn’t solved a conundrum that is keeping the boss up at night.

It’s hard to tell whether he’s in a funk because of the team’s struggles or vice versa. That things have taken a downturn since he signed his new big-money contract has added extra spice to the narrative.

Ahead of Thursday’s clash with Dundalk, a game Aubameyang will sit out, Arteta was asked if he’d consider benching his talisman.

He replied: “No one is undroppable. At the end of the day, we have to find the right players to win football matches.

“But we cannot forget what Auba has done for this club and what he has done in recent months, not years ago.

“As well, I see how he’s training and how he’s behaving, how much he wants to turn this situation around. When I see that type of hunger, it’s about supporting the player as well as the status he has in the team because of the performances he has provided for this football club.”

Asked what he’s doing to keep his captain positive, Arteta added: “Listen, today and this week, the response that I’ve seen from the players and the reaction I saw from the players after the match [against Sp*rs], I cannot be any prouder. Because I know how difficult it is for everybody at the moment.

“After losing a derby you can be completely down and I saw a completely different team, a team that wants to fight, that has a big belief in what they are trying to do and they want to push themselves and push each other harder and harder.

“Auba was one of the main guys there and today he was walking around the place with an energy that wouldn’t be associated to a team or a player that is suffering at the moment and that is for me the way we have to approach it.”

It’s just a thought experiment, but what if paradoxically dropping our arguably best player in Aubameyang for Lacazette with Saka as LW and Pepe as RW would actually make us better. Saka playing as winger with Tierney on the left of a 4-man defence behind him and Pepe playing as inside forward with Bellerin overlapping. Midfield trio of Elneny, Partey and Willock/ESR should provide enough energy and both defensive stability and creativity and bodies in attack. I’m not saying we should, but Aubameyang without goals is almost like playing with 10 men. I’d still prefer the formation above to have… Read more »

We would probably just play Willian as a false 9 and keep pinging crosses in. Auba isn’t playing well but we have an absolute mess of a system/tactics right now which virtually ensures no one looks good. Arteta needs to find a system and stick to it even if we don’t have the exact personnel he wants b/c quite frankly we don’t have the exact personnel for any system right now.

It seems like Willian is undroppable though. Auba will come good again when they stop the crosses.

You want creativity, no? Willian was bought to do just that. The manager kept playing him expecting him to regain form but it didn’t work. It is now time to drop him and give time to Smith-Rowe.

Yes, I want creativity, but I don’t believe Willian was the right choice to provide that. I never thought he was sensational at Chelsea, just a good squad player, and at his age he was never going to improve Arsenal.

Willian was brought in most likely to follow orders and be a relatively safe option on the right hand wing (Arteta clearly doesn’t rate Pepe). At Chelsea Willian was the steady player opposite the unpredictable Hazard on the other side. Willian was a beyond dumb signing – why are we handing out massive contracts to old players in what is obviously a rebuild – but he was never brought into be a creative hub.

What I really don’t understand about Willian is that for the last half hour v Sheff Utd we played with Auba as the central striker with Pepe & Saka on the wings & Willian in the ’10’ position. Best he has played for us by far…..and yet hasn’t got a minute there since.

It’s funny, but not funny, that it seems every player we’ve put in a #10 role recently has looked good there – Willock, ESR’s cameo, Willian, Laca when he’s deployed deeper, Saka when he cuts inside to attack the box, and Ceballos when he has pushed up into the attack.

Which makes it all the more infuriating that we don’t in the League. We play a giant donut formation instead.

The irony is that Mkhitaryan on the right inside forward role would have been much better than Willian, but we cancelled his contract and he’s now tearing it up in Rome

A Carter USM reference ? If so, well played sir.

What was working? People’s Memories are getting shorter and shorter by the day…

No one is undroppable.
Willian?

People who call for this guy to be dropped, crack me up.

Yes actually, and not joking.

If we are just going to ping 44 crosses per game to a strikers head (which is our current gameplay) then yes, it would be more intelligent to have Mustafi in the box than Abua.

I guarantee that Mustafi would score more goals.

I wanted to laugh at you then thought about it. Mustafi is awesome at heading the ball.

He’ll have to start practicing on the other side of the offside trap. His crazy last ditch lunges won’t cause as many cards or penalties because he’s up top, haha.

Can’t be worse than what we’re doing now. I miss Giroud.

Giroud was quality most weeks and vastly under appreciated. He held onto the ball long enough for leaden legged midfielders to close the gap, played lovely round the corner flicks for darting wingers or just generally made it difficult for defenders to win clean headers leading to second phase attacks. Auba would’ve cleaned up if we had kept the two of them . I remember the mood music at the time though was we wanted a different style so you reap what you sow I guess

Mikel, a boy who cried wolf… 5 or 6 times already.

Arteta is going to drop Auba for whom? It’s not as if we have Lionel Messi waiting in the wings. I actually feel sorry for Auba. The whole world and his mother knows what Auba’s strength is: running on to the through ball and finishing one on one with the keeper. So our tactics seem to all involve getting crosses into the box? No wonder he looks pissed off all the time. His heading is the weakest part of his game. Arteta needs to have a complete rethink of his tactics. And the one player who should be dropped is… Read more »

I actually feel sorry for Pepe. The whole world and his mother knows what Pepe’s strength is: running on to the through ball and finishing one on one with the keeper.

So that’s two key players we are tying down with tactics that don’t suit them.

Looks like Martinelli is coming back, might even be on the bench tomorrow. I expect Arteta will play him as a defensive midfielder and tell him not to cross the halfway line.

A P
Reply to  AussieGooner

Which is kind of moot because the player most likely to create through passes cannot play.

Willian used to frighten me whenever we played Chelsea , he frightens me even more now he’s playing for us

Truth is we don’t have too many good choices. Martinelli is still working in and will need time to pick back up. Nketiah also needs more time and not necessarily the answer evenif he (like some) may look good in minnow’s league europa. Laca is the only other option up top and frankly the better one (Unless we play on the break which will depend on circumstance) Right side of attack even more lacking in options despite/due to years of missteps. Mhkitaryan, Pepe and now Willian when we could have got either of Mahrez, Ziyech or Aouar. Its an imbalanced… Read more »

With the way we are playing, the goal post could take a walk during the game and no one would even notice, as we are keen on crossing and barely have a sight of goal! There could be a wormhole in the middle of the pitch and none of our players would go missing as no one plays through the middle! In all this, we are forgetting that our defence has started leaking goals again without us scoring any, so we are not compromising defence for scoring, we are just being bad at both in recent matches. Maybe, we can… Read more »

Dropping him against Dundalk doesn’t count.

And what about Willian?!

Need a passer who can thread one in tight spaces. That is Saka.

With someone who can stretch them on left wing like a fit Martinelli. We could see Saka developing into a useful player against low block. He draws many fouls out wide and would draw many more centrally.

He gets smashed up because he’s the only creative player we have, at his age it’s asking too much. I don’t want to see him hurt.

He is so POOR lack of quality CLEVERLESS, his place is not at Arsenal

I don’t get it when people are blaming Auba when things is other way strikers will not perform when they see less balls, how balls per game was he given? Let’s compare the ratio to when he was scoring to now when we don’t have any creative players.

Funso_1
Reply to  Once a gunner

Who were the creative players? And have they now left Arsenal for other clubs?