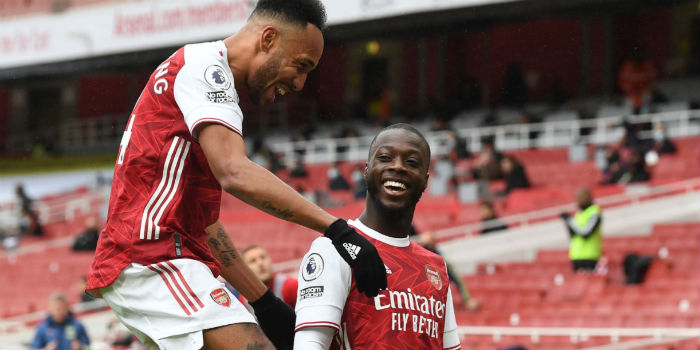 Pierre-Emerick Aubamayang says he’s pleased to see Nicolas Pepe return from suspension and backed the Ivorian to find the consistency that so far has been lacking in his game since he joined Arsenal in August 2019.

Banned for three games following his red card for violent conduct against Leeds United, the winger has been sidelined for consecutive defeats in the Premier League to Wolves, Sp*rs and Burnley. In his absence, his teammates have continued to struggle in front of goal with centre-back Gabriel the only player to find the net on the domestic front in the last six weeks.

In contrast, the Gunners have been free-scoring in the Europa League; a competition ever-present Pepe has impressed in, scoring three goals and making three assists.

Ahead of Southampton’s visit to the Emirates, Aubameyang played up his pal’s return, writing in the official matchday programme: “We’ve got Pepe back from suspension tonight and we’re all pleased to see him back because he’s been going well in the Europa League while he’s been out in the Premier League.

“Myself and Laca are always with him at the training ground and we always support each other and try to help each other out. We often think and talk to each other about how we can do better and what we can improve.

“But I know Nico is a fantastic player. I think he just needs to find the right way to be consistent in these games. And that’s it really that’s all he needs, but for sure with time he’s going to show everyone he’s the type of player we are waiting to see.”

“Everyone needs confidence and we try to give our best to him, for him to feel comfortable in the team. I hope he can make a difference now his suspension is over.”

We certainly echo those sentiments. Please, Nico. Save us.

The biggest thing I really want to see at this point is simply an acknowledgement from Arteta via team selection & speeding up play that this hasn’t been working. Willian & Xhaka shouldn’t be anywhere near the PL team at this point.

I thought there was an interesting point made by the commentator in the Wolves game. He said that Nuno had spent 3 seasons playing with a back three and that only this season had he trusted his team to transition to a back four.

Maybe, just maybe, we need to regress in that respect. I know things weren’t perfect with 3 at the back but they were certainly better.

Wenger went three, Emery went three, Arteta went three (at first). And there seems to be a damn good reason why.

With Partey in the lineup, we have the power in the midfield to play competently with a back four, but without him, you might be right.

Well, that’s what they tell us. Again, this is Arteta talk. The things he says and what actually happens are rarely one and the same.

I eagerly await the day. In this period no one has gotten a free pass from Arseblog more than him. (Red card aside)

He is not being given a pass. Never plays five straight games, new country, new language, a club in turmoil and 3 managers. Note that an entire year is with Arteta. It nuts be noted that with all the above, since he arrived he is 2nd in goal contributions in all competition to you know who.

Blogs hasn’t been particularly easy on Pepe as he constantly is saying Pepe needs to contribute more. The one thing Pepe does do though for everyone’s complaining about him losing the ball etc, is score goals – which is in really short supply in this team. In 58 Arsenal matches he has 12 goals and 13 assists which in a team that virtually never scores is a big deal.

My team for tonight would be:
Leno
Cedric, Chambers, Gabriel, Tierney
Willock, AMN
Pepe, Smith-Rowe, Saka
Laca
It may be an unpopular opinion but I’d give Auba a rest. Not as kind of punishment but rather to save him from himself. He’s thinking too much on the pitch and needs to get his head right.
Would also put Eddie, Balogun and Martinelli on the bench.

I don’t see any reason for thinking Holding has been an issue, so not sure why you’d break up what has been a reasonably decent consistent centerback pairing Also, a midfield of Willock, AMN, and Smith-Rowe is much too soft… I don’t think Willock and S-R can play together (unless one plays as a #10 and the other as a flank forwards). And AMN is not the most disciplined in his movement (which is good from an attacking perspective) so you need more of a sitter with him. So, I think it should be ElNeny, AMN, and Smith-Rowe (or Willock,… Read more »

This is a good shout.
Agree.

Agreed, with the exception of starting ESR, he hasn’t got much PL minutes under his belt this season and it’d be better to ease him in as a sub.

Should be able to do the job.

I’d select Chambers over Holding a because I think he’s a better passer and technically more assured and b because in this times rotation is needed and as Gabriel has to play every game because he’s that good, I’d rotate at least between Holding and Chambers on the rcb position. I don’t think that Willock, AMN and Smith-Rowe are too soft. Not at all. I also don’t know why you think that. Is Xhaka harder because gehe grabs players by the throat? Would give them a try. They know and like each other and the chemistry couldn’t be worse than… Read more »

Chambers and Gabriel haven’t played much together. I think Holding and Gabriel have built somewhat of a nice partnership and shouldn’t be disrupted, but you do make a good point about rotation. We need a holding midfielder, who is positionally disciplined and can collect the ball from the centrebacks and goalkeeper in tight spaces. In our current situation, Elneny is the best person for that. The rush of blood to his head in the Burnley game was not characteristic of him, usually he’s very disciplined. I wouldn’t penalize him for it. Willock does deserves to be at least on the… Read more »

Partey in the back
Reply to  Berlingoon

Put Willock in the role they like to use Laca. Or try Saka in the Laca role and move Willock to the left mid. I think ESR should start on the bench, but bring him in late if chasing a goal.

Will be interesting to see if he starts. As we’ve seen with Willock and Lacazette, it’s not so easy to translate Europa League group stage form to the Prem, and Pepe’s last outing was nothing to write home about. Arteta doesn’t appear to rate him too strongly but given Willian’s form, surely Arteta will have no choice? I don’t even want to get too down on Willian because he’s become a bit of a scapegoat for a wider malaise, but dropping him could do him and the team a world of good. Pepe also was striking up a great relationship… Read more »

Willian is our savior. Arteta and Edu said it so it must be so

Mikel: “but we have three attacking right sided players already, Pepe, Martinelli and Reiss”.
Edu: “ I know that but my agent buddy is offering Willian at a snip”

Inconsistent is better than most of the others who are consistently fucking awful.

Actually Pepe is the stuff of God in front of goal and should not be restrained by a structure.

Where’s pepe gonna play? The right wing spot is not his. That’s the non negotiable.

Haha, he should be given the free forward role

From now on, we should refer to the Sp*rs supporters section as the scrotum. They sit right under their little cock (exhibit A), and they’re always going hairy (Harry) this, hairy that.

I love Pepe, the name of course, the player sucks. Not sure, why we are awaiting his return as the second coming of Christ.
Few years ago, he wouldn’t have made the bench at Arsenal

My guy Ash, Pepe is Jesus . Remember this