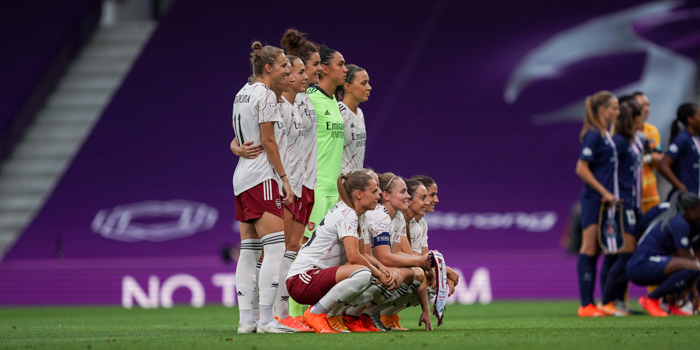 In essence, the story of Arsenal’s defeat to Manchester City is exactly what you saw with your eyes. Arsenal started brightly, took an early lead but City gradually pushed Arsenal back and Montemurro’s side struggled to respond to City’s press. Arsenal had 65 touches in the final third compared to City’s 198, they had three touches in City’s penalty area (three of which were Jen Beattie headers from setpieces) to City’s 38 in the Arsenal area. Their first shot- Miedema’s third minute goal- and their second shot- a blocked Beth Mead effort, were 65 minutes apart.

Once again, in a big away game, the pressure built and the pressure told and Arsenal couldn’t find a way to progress the ball out of their own third. Against Chelsea recently, they managed this well by using the full-backs as an exit strategy, dragging the Chelsea press out of shape. Let’s look at why they struggled to repel the City press in this game.

In the opening minutes, Georgia Stanway, who started upfront for City, is pretty much the only City player pressing Williamson and Beattie, with Mewis, Kelly and Weir way behind her, making it easier for Arsenal to play out. 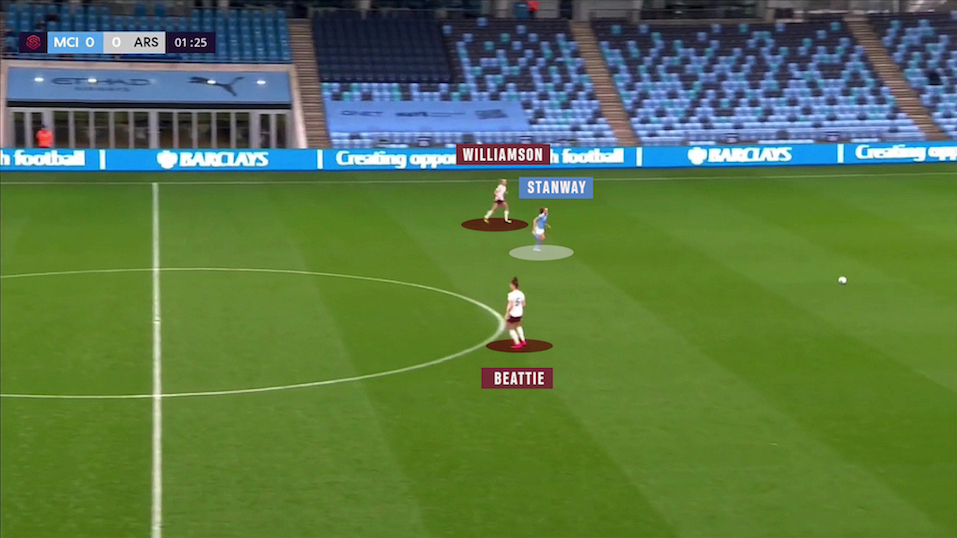 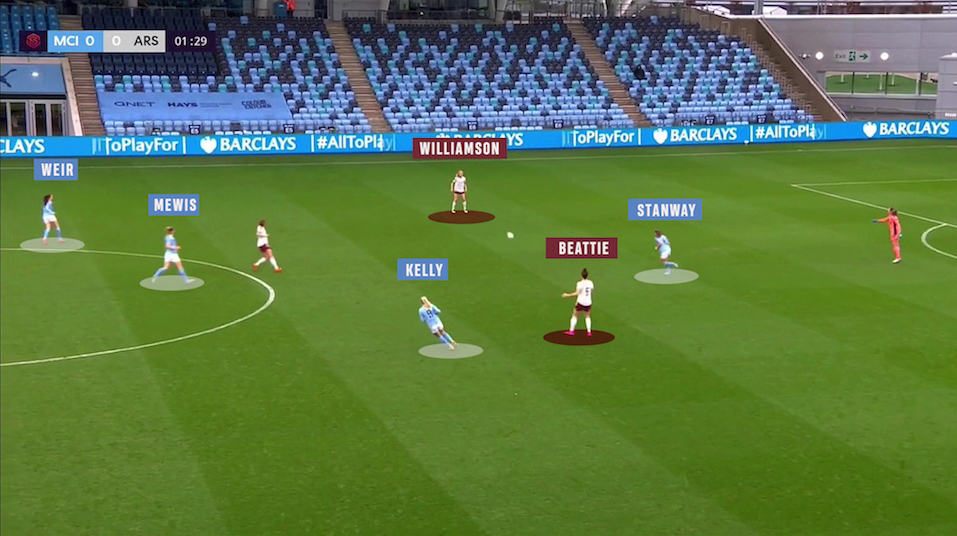 Arsenal also pressed City very high in the opening phase of the game, looking to box Lucy Bronze and Steph Houghton in on the right side of the City defence. Though the goal is a rather unforced error, look at how aggressive the positioning is for all of the Arsenal players. Roord, Foord, Miedema and Mead are essentially standing in a line and looking to pen City in with Arsenal’s defenders stationed on the halfway line ready to hoover up any long clearances. 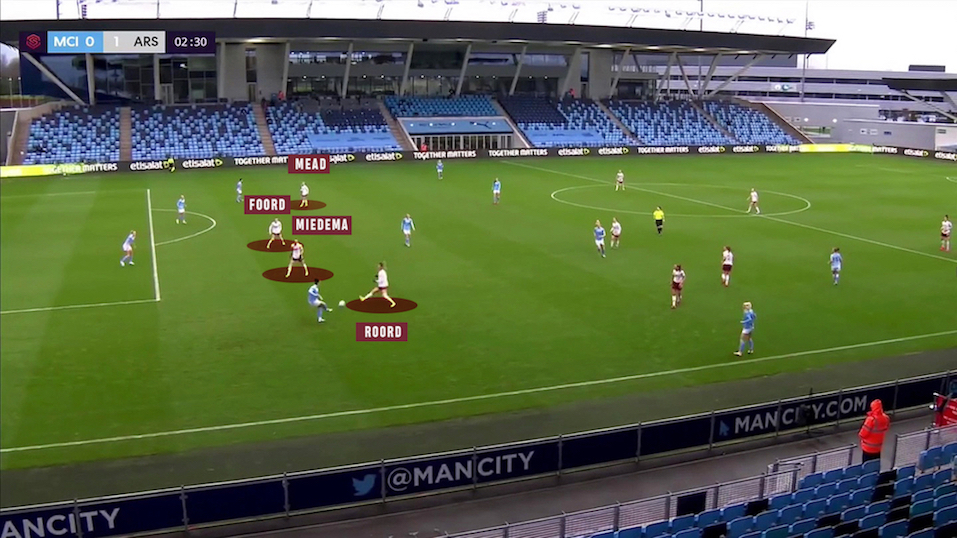 But by holding such aggressive positions, Arsenal are able to capitalise on the loose pass. Foord’s presence means Walsh hurries her pass and then Miedema is already on the edge of the area when it drops to her. 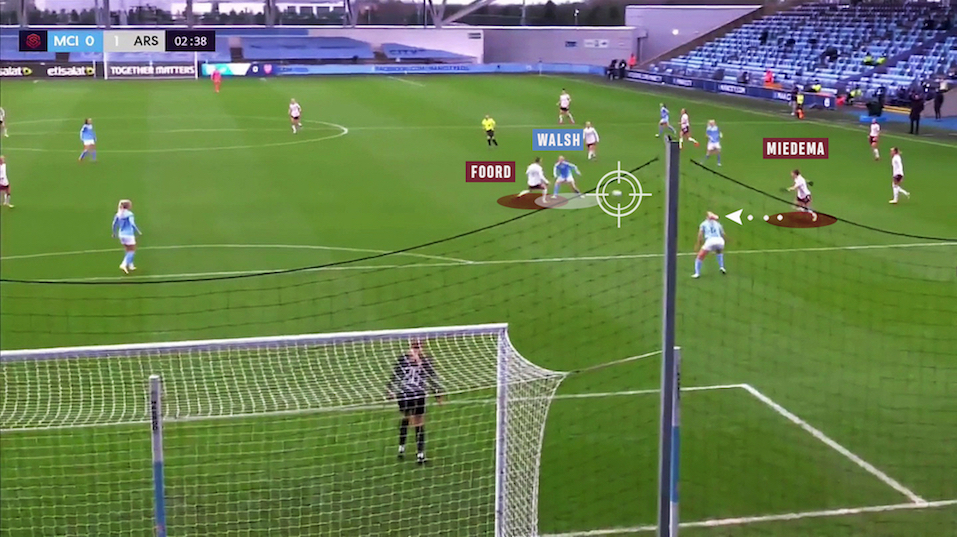 You might recall that Tobin Heath scored a very similar goal against City a few weeks ago as they struggled to play the ball out from the right side of their defence.

From kickoff, Arsenal are on the case again. The ball is rolled back to Alex Greenwood on the left side of the City defence and Roord pressures her into pumping the ball into touch. 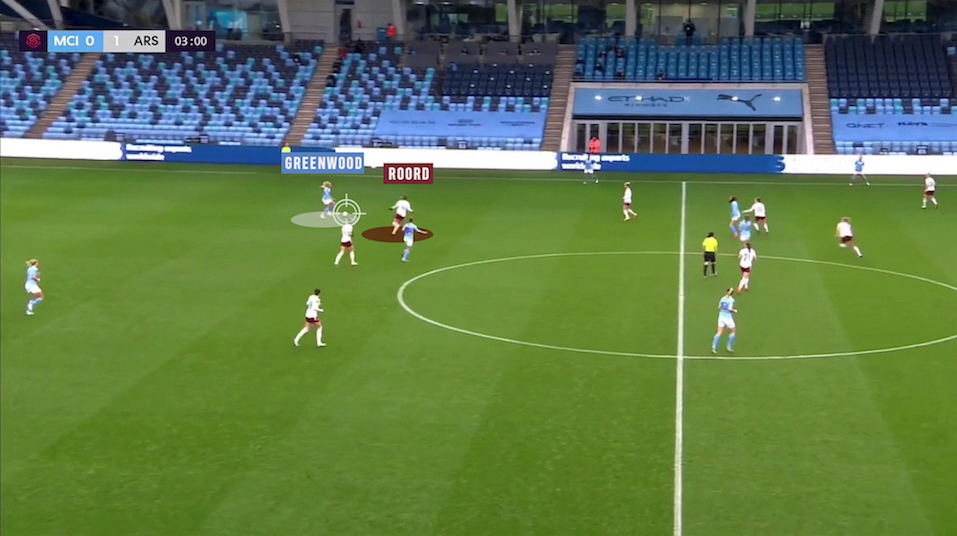 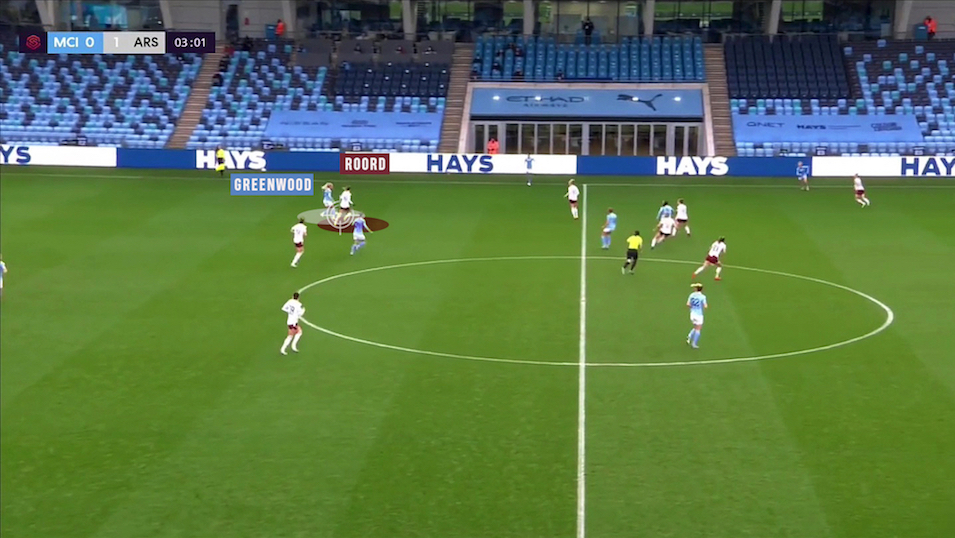 A minute or so later, again, look at how aggressive the positioning is from the Arsenal players as City seek to play out again with six Arsenal players in City’s defensive third. 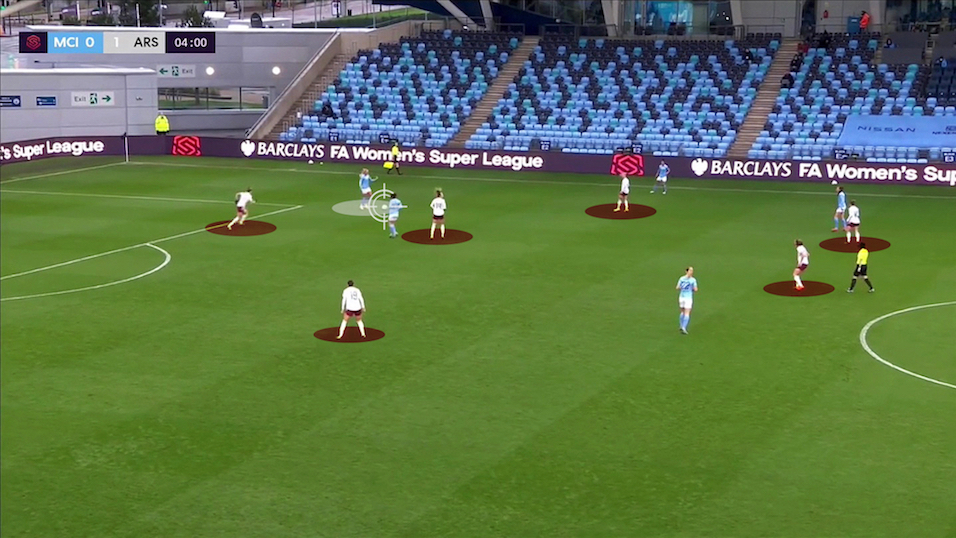 Gradually, City got to grips with the game and their own pressing became much more compact. 21 minutes into the game, look at the positioning of the City players here compared to that opening shot with Stanway pressing alone. Weir, Mewis, Hemp and Kelly are placed much higher as Arsenal play out with Weir looking more like a second striker. 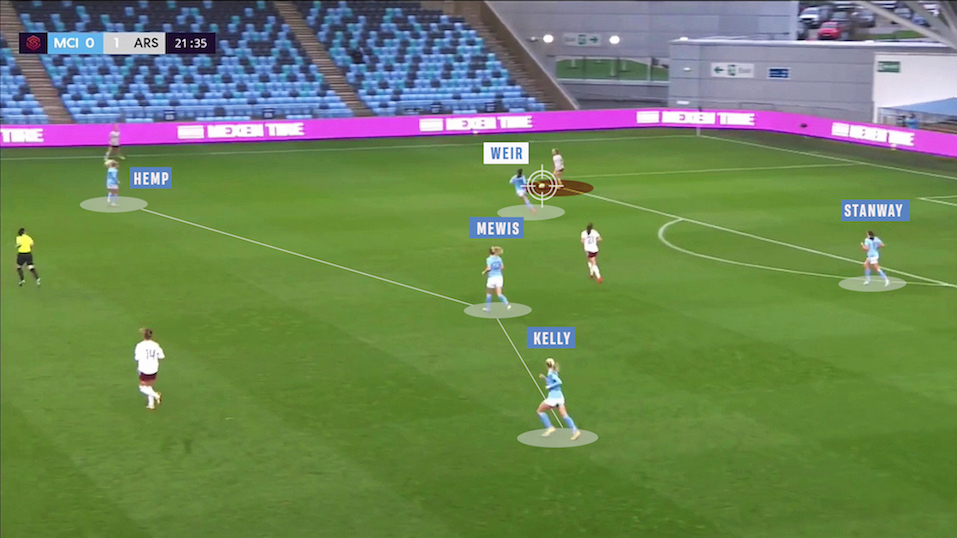 As a result, Williamson looks long for Miedema on the halfway line and, as she does, Greenwood and Houghton swarm in to win the ball back and immediately put Arsenal back under pressure. 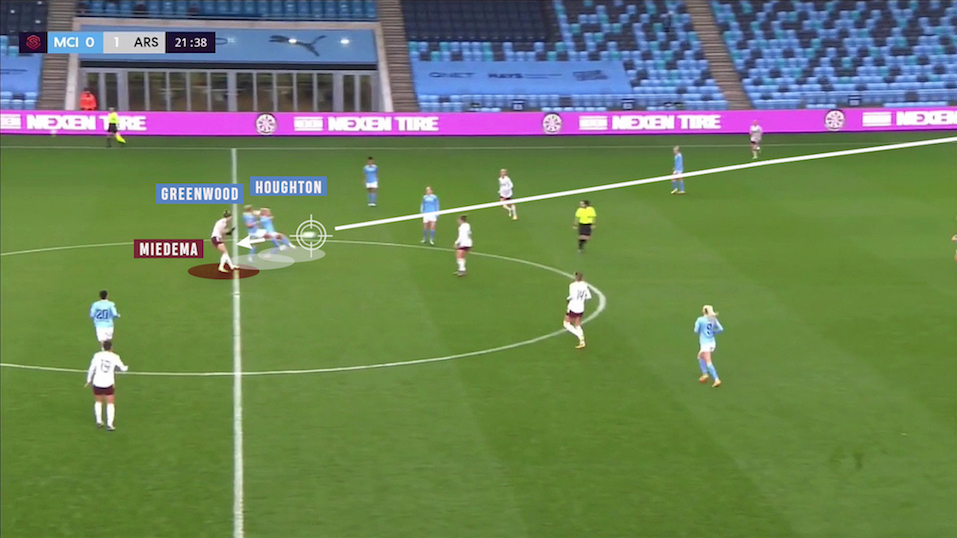 The turnover doesn’t really come to much but when City regroup and go back to their defenders to start the move again, look how much higher the defenders are up the pitch compared to when Arsenal score their goal. Arsenal’s front four are now near the halfway line, where the defence was previously. City have pushed up the pitch and forced Arsenal back, a pattern that only developed in City’s favour as the game progressed. 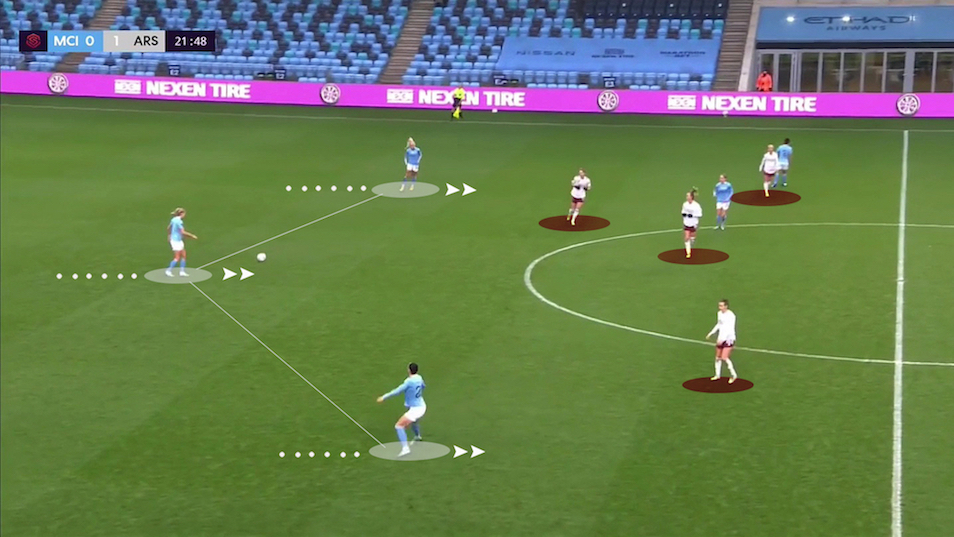 In the second half, City’s press intensified in midfield, meaning that when Arsenal did play out from the back, their forwards and midfielders were forced to receive the ball in uncomfortable positions with their back to goal, cutting off any prospect of a forward pass. 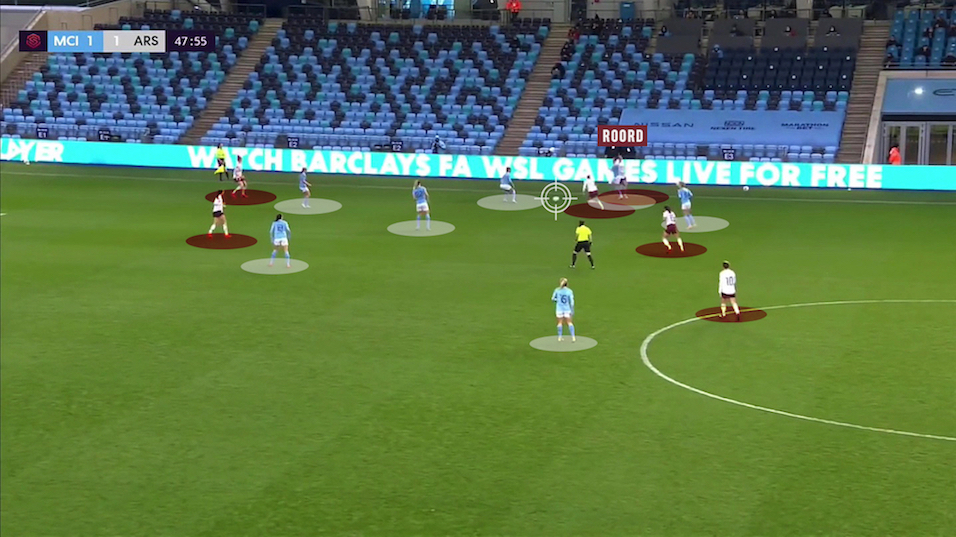 As Arsenal play out through McCabe, look at how much pressure Jill Roord is under, way out on the flank, with her back to goal. Malin Gut is having to almost sprint back towards her own goal to create a passing angle for Roord. 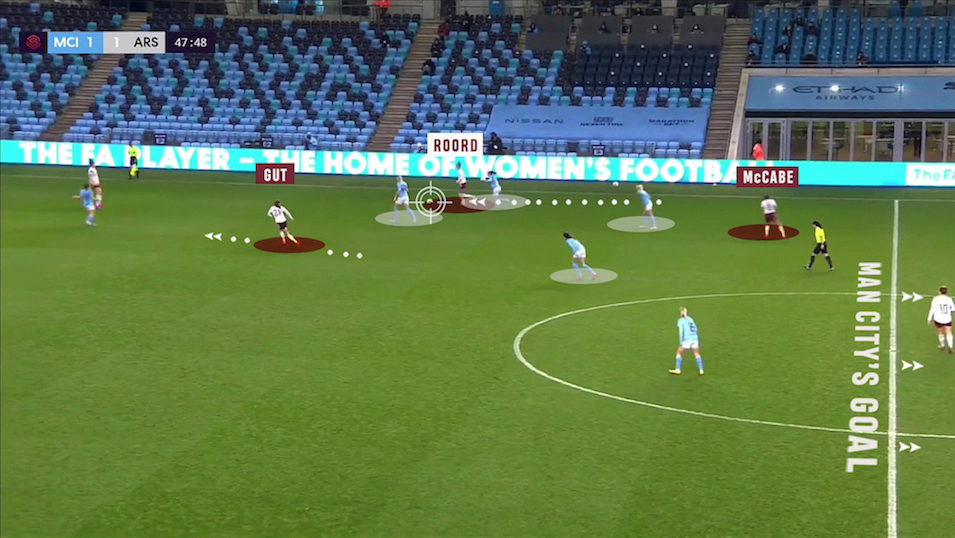 Arsenal try to go backwards to start again but can’t and City win it back. Gareth Taylor’s side have seven players within this screenshot compared to Arsenal’s six. They simply swarmed the visitors. In this move, Arsenal eventually get the ball back but look at how far back they have been pushed when they do get some rare possession. 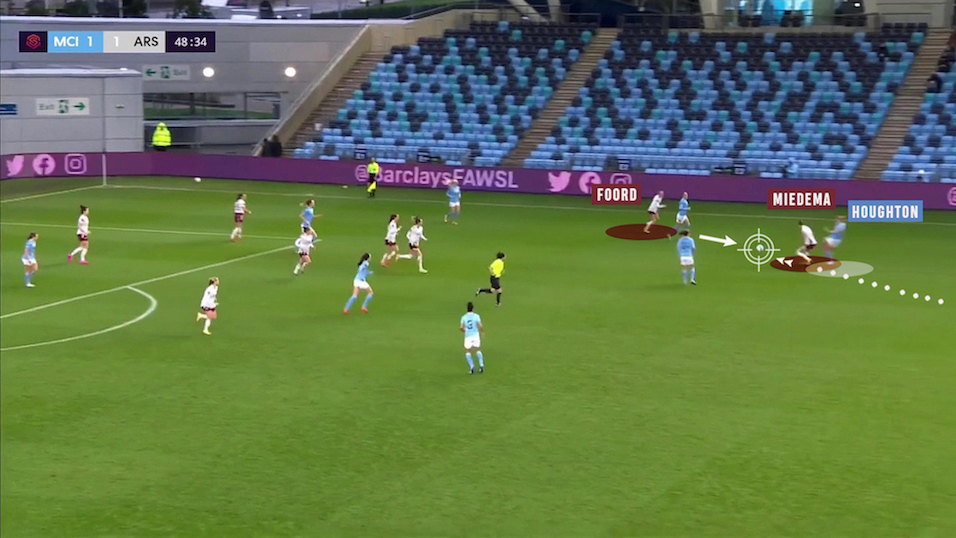 Foord tries to play the ball to Miedema, who has had to drop so far back in search of the ball. Houghton nicks in to make an interception on this occasion. When Steph Houghton and Vivianne Miedema are jostling for a ball some forty yards from Arsenal’s goal, you can see the pattern the game has fallen into. This rendered Arsenal’s plan to press City redundant, the ball was simply never in City’s half.

As a result, Arsenal’s play became scrappy and unstructured. You can sense their panic early in the second half when Jen Beattie, very uncharacteristically, dives in on a challenge with Sam Mewis in the area. She just about gets it right but it was the sort of high risk manoeuvre you almost never see from Beattie. Mewis, in particular, caused Arsenal anxiety. 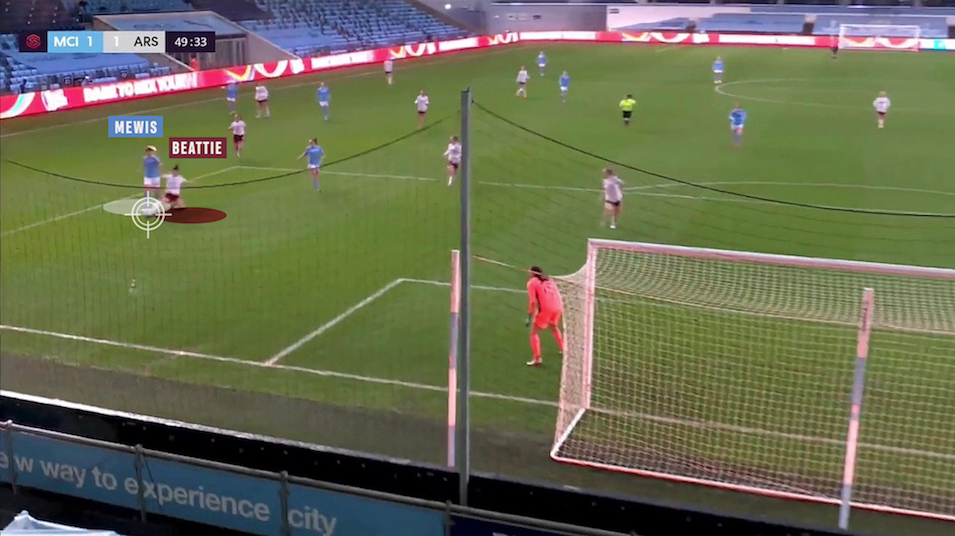 Nevertheless, Arsenal actually survived the City press- it wasn’t the source of the equaliser and the home side didn’t create too many goal scoring chances, despite pinning Arsenal back. But City’s pressure- and pressing- told right at the death. 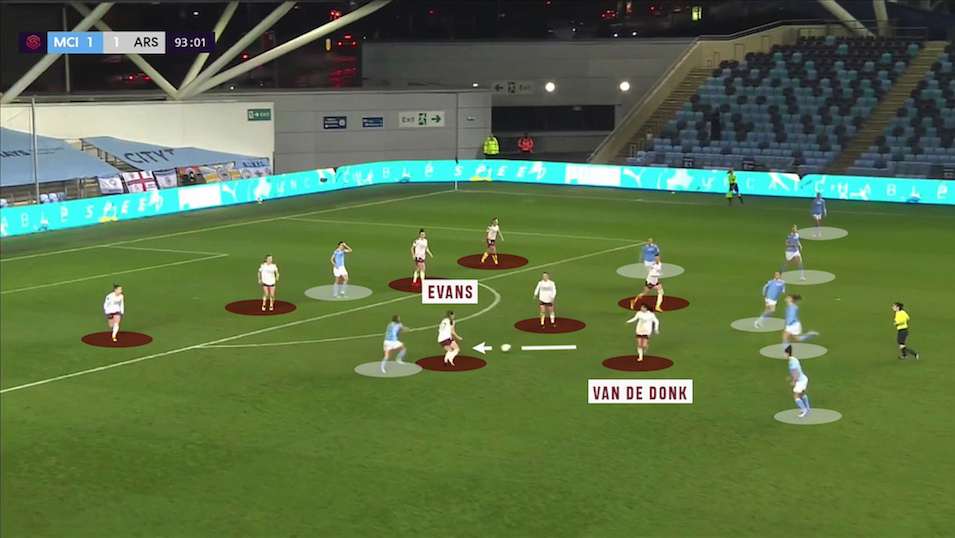 As Arsenal try to play out, van de Donk touches the ball back towards Lisa Evans and there are eight City players and eight Arsenal players in shot- including City’s entire back four. City have created a crowd scene which creates a pinball effect. 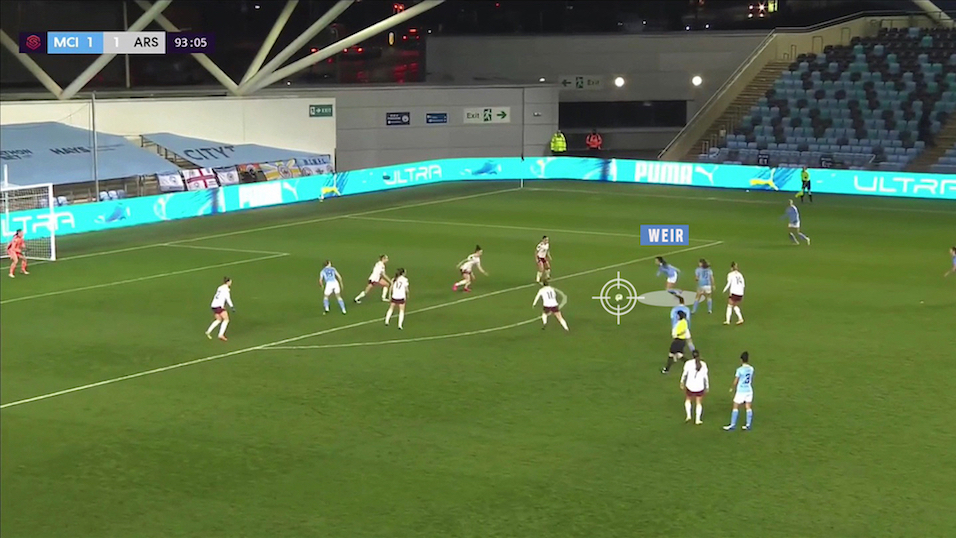 Stanway’s shot is blocked but City have so many bodies forward that there was always a good chance it would drop to a blue shirt. Regrettably for Arsenal, it dropped to one of the best long-range shooters in the division in Caroline Weir. Fortunate maybe, but after a good hour or so of forceful pressing, it was fortune City created.

This isn’t the first time in recent months that Arsenal have not been able to conjure a response to a high press, with PSG and Manchester United doing something very similar to them. Montemurro and Arsenal have to find an answer and soon.

So… What’s the score?

It all starts with the coach, recruiting players, strategizing to deciding who plays, and this is very similar to what happened to the men’s team, so what else to say 🤷

This is quality. Thanks Tim. I think question about this game, what hasn’t been asked, is what is wrong with our fitness levels? Why ManC who had midweek game could press us for 90 minutes, but our frontline and midfield was walking in 60th minute? And the same is playing out of oposition press. It requires constant movement and run after run and we didn’t have that. Positive for both this game and also for the whole season, is been that we are very good at defending deep. ManC couldn’t get chances by their buildup, but only with set pieces… Read more »

Chelsea and ManCity always seem at full strength when we play them–and Arsenal is NEVER at full strength. We were missing two starters–Walti and Maritz. Without Walti, Monte plays 20-year-old Gut as DM. Gut has great potential, but already it’s advantage ManCity. Beyond that, Catley, who was signed for matches like this, is finally healthy after being hurt all year and Montemurro doesn’t start her. I agree: I wonder if Monte is getting his lineups wrong: I would have liked to see McCabe and Evans up front with Miedema. Ford and Mead are good–but Evans and McCabe have a bit… Read more »

Was a major bummer. They fought really hard. Man City are a really good team and their midfield was strong and dominant. Arsenal unlucky. But it’s a big lossed 3 points especially with the winner so late…

Thank you for the great analysis. Now i understand that it was meant to be 4-2-3-1 but our gameplan was destroyed so early that it doesn’t really matter. Maybe we just have so different players that there is no ideal system and no 100% effective gameplan for us to use against top sides? Nobbs, Little and DvD are creative but they can’t fight for the ball. Mead and Foord can run and shoot but they can’ pass and they are not creative… It seems that we need one attacking player in the middle. We must control the game and control… Read more »

i really like this style of article where specific, concrete tactical analysis is conveyed with both texts and pictures/diagrams. would be thrilled if we could get the same for the men’s team as well.

Spot on. Missing Walti’s ability to play deep and open space and connect the play. Kim had to come deeper which disrupted the flow. Gut is good but not ready for City or Chelsea. Substitutions were odd. Instead of bolstering the midfield, Catley was brought on the right (as Arsenal struggled to play down the right with Maier) and the wings were replaced. Nobbs and Evans coming on showed a desire to play for the win but what Arsenal seemed to need is a steady CB to move Williamson into def mid or a more veteran backup for Walti in… Read more »

Why not start Catley at left back, which she was brought in to play, and move McCabe up to left forward? I like Mead but I think McCabe is better suited for these games against strong opponents–and she’s left-footed. I also like Evans more than Foord on the right as she’s got more pace and can be more of a counter-attacking threat, IMO. They’re all good players, and so it’s all about finding the right combinations, which Monte may not be doing. Had Wueben-Moy been healthy, then maybe Monte could have played her at CB and Williamson at DM, which… Read more »