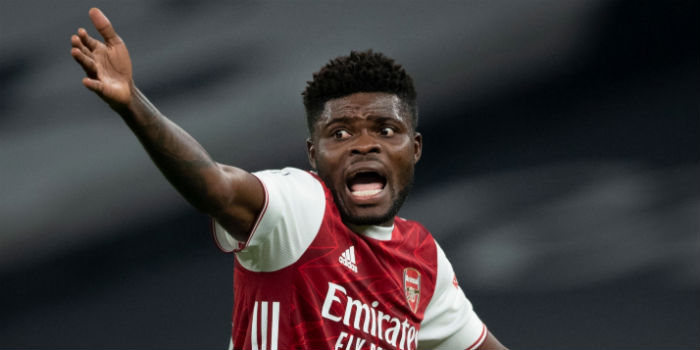 Thomas Partey is the only injured member of Mikel Arteta’s squad as the Gunners prepare for tomorrow’s clash with Dundalk.

The Ghana international spent a month on the sidelines with a thigh injury before starting Sunday’s North London derby and could be facing a similarly lengthy layoff after aggravating the problem.

It was a risky decision by Mikel Arteta to start the 28-year-old at White Hart Lane and it backfired in spectacular fashion with the midfielder pulling up just as Sp*rs mounted the counter-attack that led to Harry Kane doubling their lead.

Clearly irked by his summer signing’s decision to limp to the sidelines at a vital moment in the match, the boss then pushed Partey back onto the pitch but he immediately pulled up in pain as he tried to sprint. Dani Ceballos replaced him.

Partey was sent for a scan on Monday and Arteta has confirmed that he’ll miss a few games although at this point it’s unclear how many. Given we play seven games this side of 2021, it’s far from ideal. He went on to defend his team selection.

“He got injured in the same area, not exactly the same spot but the same area as before. He will miss the next few matches,” said Arteta on Wednesday.

“He did incredibly well and he was very confident. We tested him three times and he had zero symptoms, but in football you have a lot of unpredictable actions.

“He went into the floor, his knee got stuck, afterwards he stretched and got up. Immediately he put a lot of stress in a similar area and it happened. Afterwards people will say it was a bit early but I don’t think it was because he was completely fine to play.”

Reflecting on the latest setback, Partey wrote on Instagram: “Being part of the Arsenal family is something incredible for me, since the day I arrived I have felt so supported. The coach had a great influence in my decision to join this team and even though we had some bad results I know we are building something good together. I have had the bad luck to suffer an injury but I hope I can play again soon and fight for this team.”

In positive news, Gabriel Martinelli survived 45 minutes unscathed as Arsenal’s under-21s lost 3-0 to AFC Wimbledon in the Papa John’s Trophy. The match was the Brazilian striker’s first since March when we beat Portsmouth in the FA Cup.

He suffered a knee injury in training in June and has spent the last six months recuperating from surgery. Another couple of run outs with the Academy boys and he could be an option off the bench in the coming weeks.

Our other long-term absentees, Calum Chambers and Pablo Mari, made their returns in last week’s 4-1 win over Rapid Vienna. Both are in contention to start against Dundalk in our final Europa League group game in Dublin. A number of youngsters including Folarin Balogun, Miguel Azeez and Emile Smith will also be hoping to play some part.

It is what it is1

We will heal. Let’s use tomorrow to gain a bit of momentum and psotivity.

Johnny 4 Hats
Reply to  It is what it is1

Well here we go. Perfect time to try the midfield partnership that we’ve all been crying out for…

All jokes aside I have always been curious as to why Luiz hasn’t been tried at DM. It’s not like we don’t have the CB cover and his passing is the best on the team.

Emery tried Luiz at DM in his final game with Arsenal, so a pretty worrying omen for Arteta if he’s ever tempted to give it a go.

Rafa Benitez tried Luiz at DM and won the Europa.

Probably because he doesn’t play there.

It could be argued he doesn’t play CB… or at least very well. He would be less of a liability in DM also.

No he definitely plays CB… he also likes to play every position in front of him for fun, on 2/5 attacking plays where he’s involved.

I feel like we are having a tough time at the moment. And then tonight I watched the Barca Juventus highlights and saw that Barca still have a player called Martin Braithwaite on their books.

Braithwaite is a dead-ringer for Willian;
https://www.whoscored.com/Players/73494/Show/Martin-Braithwaite

This December will truly test Arteta just as much as the last.

“A number of youngsters including Folarin Balogun, Miguel Azeez and Emile Smith will also be hoping to play some part.”

Hopefully next time they’ll bring him back slowly and build his fitness properly. He’s going to be missed.

Feel sorry for Thomas and wish him a speedy recovery but let’s not rush him back this time. Shut him down until he is 100%.

Great that Chambers, Martinelli and Mari are back. We need all the help we can get with the busy schedule. Let’s hope we can clear out some of the excess wood in January and start the rebuild in earnest. The team is is very unbalanced (8 CB’s) and no creativity.

Congrats to Gabriel on winning POTM again; one bright spot this season.

Wow. I don’t know about this season. Maybe just put all our eggs in the Europa basket coz top four is looking unlikely.( Fully aware a lot can change between now and the end of the season but I am not holding my breath)

We should do as good as we can in all competitions, but I see no clear way, that we could go far in the Europa. A lot of tough teams and some very good sides. But we should secure atleast EL in some way, that should be the minimum, though it does not look pretty at the moment.
Up The Arsenal!

Only one player injured in the entire squad? And the squad are underachieving. Compared to the Wenger years when half the team would be injured but we’d grind out wins and top 4 every year.
There used to be a lot of talk about players being physically on the edge and the risk of injury that brings, could it be that they’re not being pushed enough?
Just an observation, not saying I have any expertise in the subject.

With games every 3 days, and increased fixture congestion and rising injury rates due to the lockdown and delayed start to the season, plus the normal summer tournaments that it seems players need to endure almost every year, I don’t think the players are dealing with a lack of physical challenge.

We’ve gone through a major renovation of the back room and fitness staff since Wenger. That may be much of the difference.

I think we’ve also rotated players more, though I admit I haven’t tracked that to be sure.

It’s pretty callous to suggest that because we only injured played we should be pushing the players harder and risking their health. For what? So we can reach some kind of imaginary injury quota of 4 players injured at any given point of the season?

I would like to see Auba start against Dundalk tomorrow just to get him back scoring again. His confidence is clearly low at the moment. Even if Dundalk were to play a low block, our midfield shouldn’t find providing him with decent half chances as arduous they have in the premiership games.

Him, Pepe, and Nelson, with either Willock or ESR. Get some Automatisms going.

Viv the 🐐
Reply to  StrugglingArsenalFan

He is younger than Xhaka too. When I found that out, he was even more of a no-brainer.

So that’s how that works?

Welcome Europa League group stage game. This is our level, where even though the team doesn’t perform but our players are infinitely better than the opposition and we win.
Hope for a good win today, before Burnley game

A few matches out? Isn’t that what Arsene said about Vermaelen, just prior to his missing a season?

We have seen players return too early from muscular injuries constantly with Arsenal over the years under various managers and more often than not there is a quick reoccurrence of that injury or even another one. Just hope we are smart with him the next time.