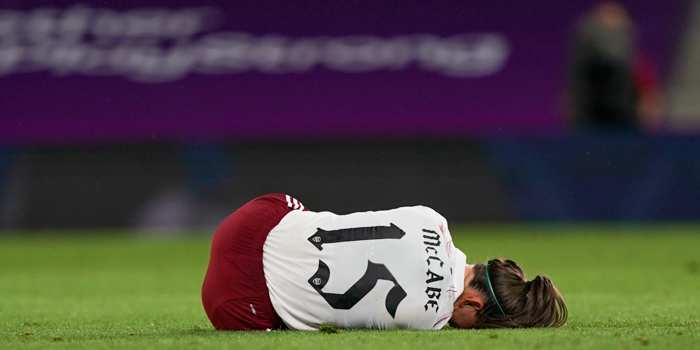 Katie McCabe’s next Arsenal appearance will be her 100th for the club. Katie joined the club from Shelbourne at the age of 19 and has flourished at the club since the arrival of Joe Montemurro in a variety of roles. McCabe currently leads the WSL for assists with six this season, all from left-back.

Speaking to Arseblog News ahead of Sunday’s trip to Manchester City, Montemurro described the Ireland captain as “the bricks and mortar” of the Arsenal squad. “Katie’s is a story we’re really proud of at Arsenal. She was out on loan (at Glasgow City) when I arrived and I just saw these great qualities in her. These are the sort of players that are the bricks and mortar for your squad because she’s able to play well in various areas.

“Her character and attitude are amazing too. I love working with Katie and week to week and session to session she is performing and she deserves every accolade she gets.” Arsenal face City at the Academy Stadium on Sunday where they haven’t won since 2017 and they have already lost their this season in the FA Cup semi-final. The Gunners boss says he is expecting a different challenge from Gareth Taylor’s side this time around though.

“We’ve looked again at the FA Cup game definitely and we’ve assessed a couple of different things that City are doing- their setup is a little different compared to the start of the year, so we’ve really focused tactically on that.” However, the Australian believes games against Manchester City are different to matches against Chelsea since they are not local derbies.

“This game is less emotional,” he explains, “It’s slightly more tactical, both teams are similar in the way we play and we think from a tactical perspective if we’re well prepared and up for the challenge, we will do well. It probably doesn’t hold the level of emotion that the Chelsea games have.”

Arsenal will likely be without Lia Wälti who is still recovering from a head injury sustained on international duty nine days ago, “She’s very doubtful. She hasn’t recovered totally from the concussion she sustained with the national team. It’s a day to day thing at the moment, she’s passed all of the tests but there are a couple of things we’re still just not sure of and we won’t take any risks.”

Well done Katie. You are indeed one of the unsung heroines of the squad along with Lisa Evans. Both immensely popular with the fans and deservedly so.

Early contender for player of the season. Imagine how many assists she’d get if she got a run as a winger!

This coming game may be less emotional than Chelsea game, but for me this may be the most important game of the year because everything that has gone before. Because we lost to ManU, if we lose this one also, we are done. Title is not possible anymore, ManU will be difficult to catch and ManC could even catch us up. Also for me probably most important game regarding Joe. This time he has most of the squad available. Even in Lia can’t play, Leah can play there because Jen/Lotte are available and also Malin can do a job. He… Read more »