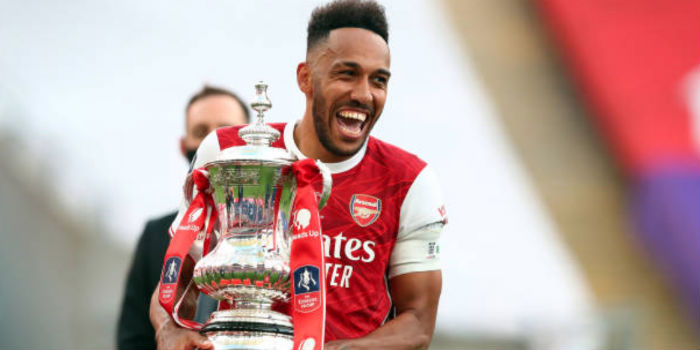 Arsenal’s reward for Saturday’s win against Newcastle United is an away draw versus Southampton or League One side Shrewsbury Town in the FA Cup 4th round.

There is some suggestion that the Saints will get a walkover after Shrewsbury were unable to fulfil Saturday’s 3rd round clash at Saint Mary’s due to a Covid-19 outbreak in their camp. We’re not entirely sure when a decision will be taken on this, but presumably, it’ll be soon.

An away trip against Southampton would certainly represent a tough test for Mikel Arteta’s holders who are already due to face Ralph Hassenhutel’s side in the Premier League in the same week.

We’ve faced the Saints in the FA Cup twice in the last 20 years. We beat them 1-0 in the FA Cup final in 2003 and 5-0 at Saint Mary’s in 2017 when Theo Walcott scored a hat-trick. The Gunners have played Shrewsbury three times in the FA Cup. We won 2-0 at Highbury having been taken to a replay in 1968 and also beat them 1-0 at Gay Meadow in 1991, courtesy of a Michael Thomas thunderbolt.

The FA Cup games are scheduled to take place between 22-25 January and the league encounter is pencilled in for 26th January.

Should we beat Southampton or Shrewsbury we’ll face Chorley or Wolves.

The FA decided to hold a double draw to aid the planning of ties due to the hectic schedule.

Is it me or do we always draw Premier League teams nowadays? Ever since that year we got Sutton and that bloke ate the pie at half time it’s been tough opponents. Meanwhile Tottenham get Marine then Wycombe!!

We didn’t get much of a let off in the League Cup either. Leicester, Liverpool and Man City. And Benfica is a toughie too.

Makes us look better when we win it

Yeah, the FA are trying as hard as possible to bubble- and gift-wrap a trophy for Spurs this year. Amazon will deliver it no charge.

30th anniversary of them last winning the FA Cup…

And even then, they needed a Des Walker own goal to win it.

Good point, the year ends in a 1! Time for the Spuds to win another major trophy I guess

Brentford, Marine then Wycombe, take out ManUre or Scousers, us or Soton – is someone trying to help Spuds to Wembley again?

At least we know we have to go strong on team selection again this season to keep out trophy.

I hate to say it but I’m almost convinced Sp*rs win a trophy this season.

Jose has done it at every club, even at United he won two in his first season. I just hope it’s the league cup and not the FA cup. Then we can belittle them for celebrating a Mickey mouse cup with such gusto even though we all went mental when we won the community shield.

If we win the Europa League, don’t need to really care about the FA Cup for such a tough season. Chances are Spurs will miss the top four again.

Pretty tough in Europa League this year; quite a lot of teams at this stage are in good form.

England – United, Spuds and Leicester
Spain – Real Sociedad and Villarreal who are in top 5
Italy – League leader Milan, Napoli and Roma who are in top 5
France – Lille who were leading the table until recently
Germany – Leverkusen who is in top 3

Plus teams like Ajax and Shakthar are there as well.

The Arse End
Reply to  indiegooner

What are the odds a semi or even a final against Emery, the Europa specialist?

That isn’t something to look forward to, there is going to be some level of motivation on his side.

Oh it’s that age old paradox of what happens when a unstoppable trophy winning cunt joins a club that’s can’t ever be moved win anything. Maybe it will cause a space time rift and have their toilet bowl stadium implode into itself.

You have to factor in that it’s Spurs though. Spurs who hilariously got knocked out last year on penalties by Norwich City, while we beat Man City and Chelsea to win the cup. It’s not comparing apples with apples is it?

I had wondered what happened to that guy, luckily he managed to land on his feet after being unceremoniously kicked out off the club. He seems like a nice guy.

Thanks for that Carlos. Even more interesting in that I have used the pub he was buying – playing Petanque (they have a very good team and a very weird pitch)! Perhaps they’ll lay on a pie supper for us next time.

That’s nice to hear. I was at that match – probably the only person from Canada who managed to get a ticket (it helps being the only person in Canada who supports both Sutton and Arsenal). I got to chat a bit with Wayne before the match and he gave me an embroidered jersey from the win over Wimbledon in an earlier round, which I then got the whole team to sign. And I met him again at a pub called The Plough, right across the street from the ground, after the match but before all of this blew up.… Read more »

It was at Gay Meadow actually.

He’ll, I remember going to that game at Gay Meadow – with my dad!

Shit draw. Yeah, Saints aren’t a top-6 side but they are in form. I wanted a nice easy one like Chorley or Luton.

Fuck off, Crouch, you spud cunt!

I’d rather play Saints. Bring it

Another bad effect of a tough draw: those who need playing time (squad members, those building up form after injuries, etc.) won’t be getting it from the earlier round matches. 🙁

I’d still expect a similar lineup to that of the Newcastle game. The likes of Cedric, Luiz, Pepe, Willian, Nelson. Perhaps give Tierney a break though and play AMN who needs a game.

Shrewsbury, then Chorley then. Nice easy draw. We’re as good as in the quarter final.

I think it is safe to say we have the toughest draw over the 4th and 5th round, thankfully Liverpool and Scum Utd are playing each other!!! I’m hoping Man City beat spud in the jokers cup and again in the FA cup

Where would 5th round game take place? Home or Away?

Walcott scoring the winner in the 120th minute. What are the odds?

As much as I wouldn’t begrudge Theo his moment (again) I hope he walks off the pitch empty handed.

While I wish Walcott well in the rest of his career, I really hope that he doesn’t repest his hat-trick heroics from 2017.

Absolute bollocks. If we win our next 2 games we will probably get man city next. Total BS.

We did beat all the big ones last year.

You are right, Last Year!

It’s probably our best hope of a trophy (options have been cut by half pretty quickly already) so let’s hope we can progress to the latter stages.