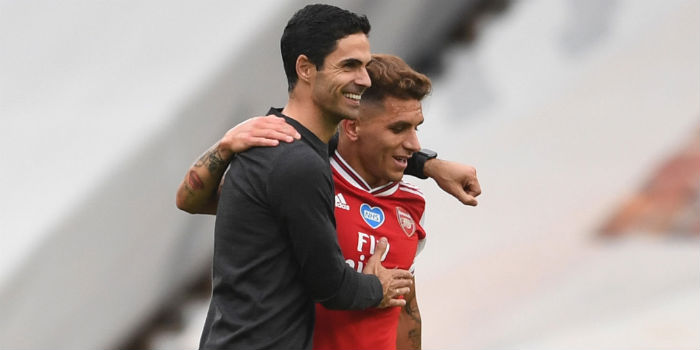 Mikel Arteta says that Arsenal are keep close tabs on Lucas Torreira as rumours about cutting his loan with Atletico Madrid continue.

The Uruguayan has been struggling for playing time since his arrival in La Liga, playing just 257 minutes in total, and completing 90 minutes just once.

The Arsenal boss, along with Technical Director Edu, are keen for him to play more, but understands why – with Atleti top of the table and front-runners for the title – Diego Simeone has been reluctant to alter his team too much.

“He hasn’t been playing as many minutes as he would like, as we would like,” said Arteta.

“But to be fair the team is doing so well in Spain and it is understandable they don’t change the team so much.

“We just want to be right behind Lucas, protect him, help him make the right decisions for the future, so let’s see what happens. But we are monitoring the situation very closely.

“We have been talking to Lucas, Edu has been very close to the situation.”

As for what might happen between now and the deadline on February 1st, Arteta said, “I don’t know. At the moment he’s going to stay at Atletico, that’s my belief and I don’t know if that is going to change in the next two or three days.”

Torreira has been linked with moves back to Italy, and in recent days there has been reported interest from Monaco, but with so little time left in the window, it looks more likely he’ll stay in Madrid.

Arteta also spoke about potential loan/permanent departures for Reiss Nelson, Ainsley Maitland-Niles and Shkodran Mustafi – read what he has to say here.

Again, I can’t understand why he doesn’t want to stay and fight for his place. They are still very active in Champions League and obviously on a potential historic title winning run. Knuckle down and fight for you place in training and when you get the chance. Running away from that speaks of character weaknesses. I’m not buying the narrative at all this is Atleti’s “revenge” on Partey. If he was good enough he’d be playing, but it seems he might be lacking not only the quality we thought he had, but also a willingness to fight.

Good lad, needs to be playing though. Hope we can achieve that for him.

I hope you’re right, although I think “smash” may be a tad optimistic. We’ll see.

What is four times zero?

By your logic, I hope Manure scores twice, so we can get our revenge for that horrendous result a few years ago…

With time running out, it looks like he’ll stay where he is for the duration. We need to get him off the books asap though and that looks more like the Summer now.

I wonder. If Torreira had been brought in by Simeone specifically to pair up with Partey and hasn’t been playing because Partey was bought – by us – wouldn’t it make sense for us to play the two together?

Or is it too obvious for Mikel?

There are things I don’t like about Torreira – his constant feigning of injury. I would also concede his height or lack of it is a problem in terms of our overall height as a team when defending dead balls into the box. But, I can’t really see how he is a player who wouldn’t fit into how we are trying to play compared to some of our slower/less mobile players. So unless we are getting our money back on him so we can buy someone better then I’d bring him back and integrate him into our group. He is… Read more »

Take him back and loan out Willock for some minutes.

Can't Think Of A Clever Name

Never liked him tbh. When he said he wanted #11 so he could sit next to Ozil because he’s a World Cup winnerin the locker room, that set off alarm bells for me. Nobody with an elite mentality acts like that. There’s being respectful and appreciative and there’s fanboying. He’s always been average on the pitch and I’ve never once heard of him being happy. Unhappy within a season at Arsenal, unhappy at Atletico. Sell if possible, or let him just sit and cry like he has for the past 3 seasons.

Gervinhothegoat
Reply to  Can't Think Of A Clever Name

Please tell us more about your elite mentally.