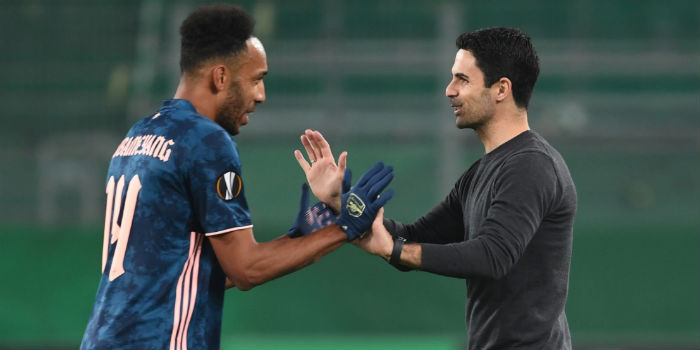 Mikel Arteta has confirmed that Pierre-Emerick Aubameyang is currently in quarantine after leaving the country to visit his ill mother.

The striker returned to London earlier in the week but despite testing negative for Covid-19, he’s had to self-isolate and subsequently missed this evening’s clash with Manchester United.

Having missed already missed two games against Southampton, the Gunners are obviously anxious to get the club captain back into training but it sounds as though he could well miss Tuesday’s game at Wolves.

“He had a family issue he had to attend to and these are the consequences to that.”

Asked when the player might return, Arteta, said: “I don’t know. We are working with the Premier League and government about it. He’s been looking after his family and now he’s in quarantine.”

Arteta: Exit would have been harsh

Get back to us, asap

Can anyone explain why Odegaard was exempt from quarantine but Auba is not?

Some Elite athlete exemption thing I believe.. he even travelled in a special flight to come here I think

I think because Odegaard travelled from one elite sports bubble to another on a charted flight. Auba would have left the bubble and then quarentine to come back into it.

Ah thanks, that makes sense!

Yes the pandemic is the fault of the EU. 🙈

He will be back when it’s safe to come back. Main thing is for his family to be healthy and Auba happy.

Obviously we want him back, but it’s just a game. Take your time

Good time for Martinelli to step it up.

Thought Pepe was decent again and can cover either flank too.

His qaubantine and getting him healthy is the most important thing right now.

Murphy was an Arsenal Fan
Reply to  BillyKrystal

I saw what you did there. That was bad if it was deliberate.

Listening to the interview, I felt Arsenal and Arteta could be more open about these kinds of things – not Auba’s personal things but when he will be back. Similarly with other injuries and updates – very weird that no one knows what is happening with Tierney or Mari or Nelson earlier.

Doesn’t know when he’ll be back, working with the Premier league and government to get him back.

I guess he has to quarantine for 10 days since his return which means he could miss a maximum of the next two matches. Is that what you mean?

Plus if he’spositive , even longer

Arteta just made the sin of assuming his audience all know the UK quarantine rules, as he and his interviewer do. Arsenal fan base is larger though, and for those who aren’t familiar with the rules, Arteta’s reply could seem unclear, or even evasive if judged harshly.

You could just look the rules up yourself if it’s chewing you up that much. Wonderful tool called Google that’s useful for conundrums such as this.

Maybe you should look up on Google how to be polite

In hind sight, using “sin” here as a rhetorical flourish was always opening myself for misinterpretation 🙂

I knew what Arteta was trying to get at: he knows the max time Auba has to be out, but the team is trying to shorten that time. As the appeal/ request is not completed, he’s unsure when Auba will be available.

He just said it in a way that was confusing.

I don’t think that’s artetas problem – if you want to know the UK rules, just google them.

He’s almost certainly going to miss the Villa away game next Saturday too then. He got back to the UK on Wednesday 27th, then 10 days quarantine, the 10th day will be next Saturday 6th February.

Yes I thought he could have clearly mentioned the quarantine period. Also I felt there weren’t clear communications on other injuries – maybe I need to check the Arsenal site.

In other news, Mavropanos has been looking good recently.

Some chatter about Van Anholt for Lback but he is 30yrs.

Willock, Nelson to be loaned out, AMn maybe permanent transfer if not a loan.

I can just picture him burying that chance that fell to willian.🕺🏼

? How come he can do this, people here are not allowed to visit their dying relatives, even only in a care home in the same town. But I guess if you have a private jet and 300k a week u can do what you like and fly half way round the world? Nothing against you auba, but having lost 14 friends or family this last year and not been able to see any of them let alone take time off work, it does feel kind of wrong.

I get that it looks unfair, but let’s say a friend of yours has a chance to see his sick mom. Wouldn’t you be happy for him as long as he hasn’t broken any rules doing so? If he were a really good friend, I bet you wouldn’t even mind if he bent a few rules, right? In Auba’s case I imagine he didn’t need to bend any rules. Surely he has a certificate to show that he’s free of covid-19 and can travel, and Arsenal probably gave him permission because he is a valuable employee, whom they want to… Read more »

No foot Norbert
Reply to  Atid

The higher up the ladder the less the law apply until eventually you’re above them.

Yes good points to be fair. I don’t think it’s anything to do with ‘private jet and 300k a week’ though – it’s the fact he’s a Gabon citizen, Gabon is not on the Red List, and as far as I know, the law doesn’t prevent someone from travelling abroad to their home country.

Personal life is a priority for top earning star, why a star player is bigger than a club. Ozil gone, now we have other. Is it a management issue or player issue?

Man takes time off for a serious illness to his mother and that’s wrong?! Seriously get a grip

It’s not wrong but it is a little unusual. And because of Covid protocols it’s now going to cost us, what, 4 games without the captain…4 big games…that’s a lot..,I wonder if this situation could have been managed better by the club and player.

How though? Obviously his mother was gravely ill. As difficult as it makes life for us, we have to remember players are people first. You could flip it around and ask what do you get from a player whose mind is elsewhere, not fully focused because he can’t be with his family.

I’m not questioning his need to be with his family – more on the process and protocols that surround his travel back and forth.

Jack of All
Reply to  arseblog

Yes yes and yes and thank you for the calm tone of that response….😊