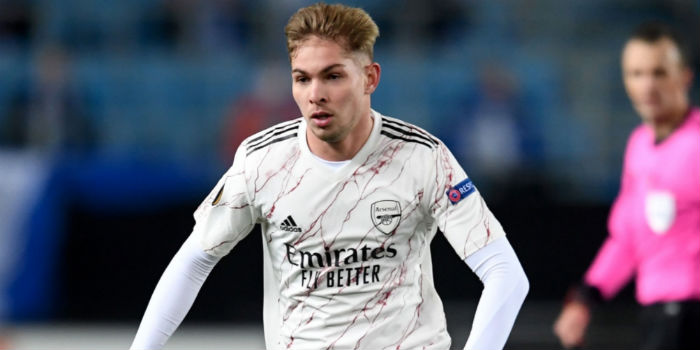 Mikel Arteta has lavished praise on Emile Smith Rowe and says he’s delighted to have a young player with the qualities to play the number 10 role for Arsenal.

The midfielder impressed on loan at Championship side Huddersfield in the second half of last season and was tipped to challenge for a place in the Gunners midfield this campaign before a shoulder injury forced a lengthy spell on the sidelines.

Game time in the Europa League and Carabao Cup in December helped him build up his fitness and he’s since put in impressive shifts in the wins over Chelsea and Brighton.

Ahead of Saturday’s game with West Brom, the boss was asked about the England under-20 international. It sounds like Smith Rowe has really made an impression.

“It’s a player that I really liked since the first day that I watched him,” said Arteta.

“It’s just the way he moves, how intelligent he is in the positions that he takes and his work rate, don’t underestimate that because he works really hard for the team.

“He had a really bad shoulder injury this year, he didn’t really train with us at all. For the last two weeks, he’s been much more involved and you can see what he brings to the team.

“I’m delighted to have a young player with his talent in that position as it’s something that we need.”

Prior to his recent performances, Arsenal had been weighing up a third January loan move for Smith Rowe. Having earned the trust of the coaching staff, it looks as though we’re going to shelve those ideas.

He reminds me of rosicky with his busy-bee style of play.

And his willingness to go forward with the ball in the final 3rd is like Rosicky. It forces defenders to react> we’ve been missing that without Rosicky, Cazorla or the brief pre-injuries Wilshere.

Got a touch of the Paul Merson about him also.

Hopefully we shelve all ideas of Isco, Eriksen etc and give these kids a good 5 months of first team football.

We still need someone to rotate with him, he and Saka can’t play every minute of every game. Isco for 5 months, with a Euros to aim for, might just be very useful, still a quality player if his head is in it.

Currently the roster includes Smith Rowe, Nelson, Martinelli, Pepe, Saka, Willian, Auba and Willock all fighting for 3 spots behind Laca / Nketiah / Balogun. I don’t think rotation is an issue for us

I had big hopes for Tomas, but his injury robbed him of the form he should have delivered over 10 years at Arsenal. I really expected many more goals with that talent.

Agree. The resemblance is uncanny.

But does he shred hot licks on the geetar?

Agree with the Rosicky similarities – and Tomas was one of my favorites despite the difficulties he faced with injuries. It’s the type of player we’ve been missing since Tomas left. For so long with Wenger we had a player like that – Rosicky, Hleb, Wilshere brought some of that, even the chinless wonder, for better or worse.

At times we had 3 players like that on at the same time! (Which is perhaps a bit out of balance and less efficient, but it was pretty to watch.)

It’s that rare combination of incredible technique and work rate. Deadly match up. ESR would be an Arsenal great. Give him no. 10 in the summer.

I really like him. Has flair, tenacity and a great engine. Plus he’s Arsenal through and through. Really hope he gets a run of games as I believe he could go right to the very top.

It still took Arteta a month to realize this, could have used him earlier. Who knows what would have happened

He was injured for most of the year, as the article clearly stated

^correcting your classmate when they didn’t do the reading 😂😂😂

Maybe he would have got injured again and we’d all moan about how he was rushed back too fast. There’s plenty we don’t know.
Anyways now he’s shown his worth I hope we take good care not to overload him. Looks like he is the future, but Jack Wilshere was meant to be that too

Any approaching common sense seems to have to fight its way through that LEGO haired head, before it reaches his brain.

And people thought Wenger was stubborn….

To think that they were considering another loan move for him says a lot about this coaching team. A pattern is beginning to emerge where talented young players are generally distrusted for no reason other than that they are young.

In contrast to Willian

You’ve got a lot of downvotes, which is weird as I think it seems obvious when you look at this year’s selections. Nelson, AMN, Balogun, Saliba all getting near zero game time when fit and in reasonable form, and the main contenders abjectly failing. Saka the only true breakthrough, with Willock getting a couple of chances and not really making the grade. If you look elsewhere, this issue seems to be common in the PL – Liverpool, Chelsea and others finding young gems typically only out of being forced to select them. It does make me wonder whether those European… Read more »

I think the mood had suddenly swung pro-Arteta among the fan base. Which worries me a bit.

“If you look elsewhere, this issue seems to be common in the PL “

Yes weird isn’t it how top professionals paid millions of pounds a year seem to know more about running football clubs and youth development than the rest of us? The mind boggles.

Apart from Nketiah starting ahead of Laca, Saka playing almost every minute, Martinelli rushed back in the minute he’s fit, as with Smith-Rowe? Saliba is odd, for sure, and something clearly went wrong there, but otherwise we’re playing younger players more regularly than almost any other team in the league! Add Willock, Nelson, and a whole host of debuts for U23s like Balogun and it seems like Per and Arteta are doing well on this front. Or do you want our U18s and U23s side to turn out in the Prem?

Saliba lost both of his parents recently. Surely he has to be given time to grieve and get back to a place mentally as well as physically to play?

Throwing him when not up to it would be both irresponsible (the club has a duty of care, regardless of how much they are paid) and damaging to the players long term confidence.

In fairness Mikel brought back and kept Eddie last year

Who is crap. He got the wrong youth striker into the 1st team.

Wengerball my friend, he’s Wengerball personified, Pass and move, give and go.. Hale End will be the new La Masia but better, more stylish and less reliant on someone like Messi.

We just have to get rid of LEGO ball first and, failing that, it’s creator.

If he’s not good enough he’ll die his own death. We have just kicked out two managers, one of them was the most successful in the history of the club. This is the age of cut throat football fandom. Artrta knows what’s coming for him, his team got booed the only time fans were in the stadium.

Last August’s FA Cup and the absence of supporters are the only things keeping him in his job at the moment.

I really find your negativity so boring. At least you didn’t crowbar Ozil into that post, so an improvement.

Maybe its negativity or maybe it is just someone who realises that a couple of good results doesn’t hide all the absurd decisions Arteta/Arsenal have made this season?

Only one team wins the league each year. Each of the other teams has many fans who think that beCa use they follow a team they should be listened to as far as decisions being made. Arsenal has far far more of those type of fans. Having watched OGS manage through tough times at United I Hope Arteta gets the same chances. Only time, transfer windows and support will ensure he had a good fair chance of managing. Since I support Arsenal, I support that chance and time. I look forward to watching what happens when Partey and a legit… Read more »

Qwaliteee
Reply to  Tete a rteta

I hope Arteta gets the sack. The sooner the better.

Fair enough. I’m not going to argue that there haven’t been plenty of absurd decisions and some really shit football under Arteta. But I want to believe in and support him as Arsenal manager. I see enough ambition in him that gives me some faith he will drag us forwards. Clever people learn from their mistakes, hopefully Mikel has learnt fast

I agree. We saw him start ESR and Saka over Willian and remove Hector after he got a yellow. I think he is learning from his mistakes.

Hmm, and your name is ‘Reality check’. Some conundrum…

We are going to have our work cut out keeping hold of this lad – he has the potential to become a world class player.

Let’s hope between now and then, our joke shop of a hierarchy can actually sort themselves out and conduct their business in a manner befitting Arsenal Football Club – not Laurel and Hardy.

At least LEGO didn’t get a mention this time!

A fan of sideways and backwards passing in a horseshoe and hoofing endless pointless crosses to a striker whose finishing comes from through balls to feet, are we….?

And how has that been apparent in the last few games since we’ve moved to a 4-2-3-1 formation? Yes, I agree in the lead up to Xmas that was happening but it’s been identified and remedied and it’s provided 9 points. And who made that change?

Well, I guess that makes everything all right and our stroll to world club football domination is a mere formality.

If Arteta is that smart, why didn’t he employ a natural number 10 at the start of the season? Oh, wait…….

Because at the start of the season the defence was a shambles so that was his priority, and he sorted that as well. If you remember we had the best defensive record earlier this season. Now that’s sorted, to a degree, he has changed formation allowing a natural ’10’ to be played. And that player was introduced in easier games during the Europa League which was a sensible way to integrate him into the team. Sorry I just don’t see where this vitriol for Arteta is coming from. And no, of course I don’t think we’re going to ‘stroll to… Read more »

So we look to sign someone like Isco to take his place. What message does that send out to the young players?

Tete a rteta
Reply to  Lac Sac and Craic

Wow Lac….seeking multiple skilled and competing players for the same position. Who are you thinking that competition and depth are important to a championship team….what is this koolaid you drinking from?

Loan him out to Tony Pulis……. oh wait, he was sacked again

Smith-Rowe + Willock should rotate the No8 role. There’s no guarantee with expensive foreign imports. For every Bruno Fernandes, there’s a Pepe, Havertz, Werner Who either take a season or so to settle, or never settle at all. Our two young lads are raw, and will have the types of games that young players have, but we’re a team in transition, and transitions are often painful. It’s a big ‘no” from me, for Isco. We’ve already got one brilliant technician who’s useless out of possession, we don’t need to add to the collection Have a feeling that for all the… Read more »

ESR is a natural number 10.

That’s where Arteta should play him.

Willock isn’t good enough for Arsenal and needs to be moved on.