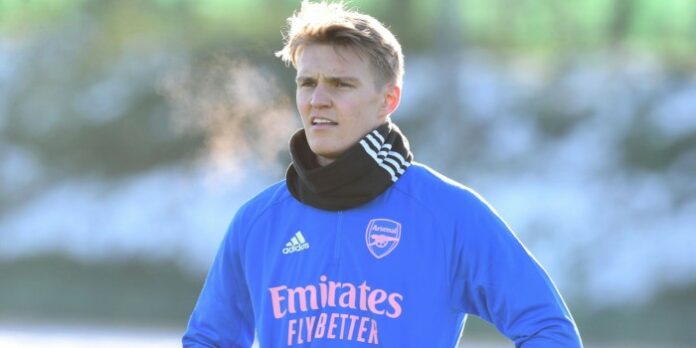 Mikel Arteta has revealed he’s been keeping an eye on Martin Odegaard’s development for some time and says the Norway international looks “so excited” to be at Arsenal.

The 22-year-old agreed terms on his loan move from Real Madrid yesterday and is expected to challenge Emile Smith Rowe for the number 10 slot over the coming weeks and months.

While Odegaard has struggled to assert himself at the Bernabeu since moving to Spain as a 16-year-old, his spells on loan at Heerenveen, Vitesse Arnhem and Real Sociedad have been impressive.

It sounds as though it was his performances in San Sebastien, the boss’ hometown, that persuaded Arteta to steal the player from under the noses of his former club who wanted him back for a second spell.

Facing the media ahead of Arsenal’s game with Manchester United, Arteta said: “He’s a player that we followed for some time and we believe that he’s got some special qualities that we need, that we have been missing.

“Now we have to give him a little bit of time. He hasn’t played that many minutes in Madrid but he’s been training hard and he looks so excited, as we are, to have another big talent at our club.”

He added: “I think in the last few seasons he’s progressed and developed in the right way. I’ve followed him very closely because he played for Real Sociedad, which is my hometown.

“I know him really well. I’ve been really impressed. He’s a such a talent. He needs the right environment, he needs a little bit of time but I think he’s got the qualities to be a success for us.”

While January loan moves don’t afford players much time to get up to speed, Arteta is hopeful his new recruit can bolster his side’s creativity as they mount a season-rescuing charge to the finish line.

“He can play off the sides. He’s a really creative player who’s really comfortable on the ball in tight spaces. He has the capacity to create chances and to score goals. Something that he has improved a lot is his work-rate without the ball as well, so it’s another option to give us more creativity for sure in the final third, and give us more options to set up in different ways against certain teams.”

It remains to be seen whether Odegaard can make the desired impact, but if he does he may well be someone we look to recruit on a permanent basis. For the moment, Arteta just wants the youngster to settle into his new surroundings.

“He certainly has all the qualities and characteristics that we are looking for for that position,” he noted.

For more on Odegaard and what he might bring to Arteta’s side, check out  Jon Ollington’s latest Data Viz analysis.

Good that he is here. We are so excited to see what he can do. He came to club for a training session back when he was 15, but chose Madrid instead (a decision I can forgive him for). I’m not sure how he will work with Pepe in the team though as his heatmap shows that he likes to occupy similar territory in the half-space to the right of where a traditional number 10 would be. Maybe that’s not a bad thing given how reliant we’ve been on attacks coming from the left in recent months. Anyway, in Martin… Read more »

No foot Norbert
Reply to  Nketibag

Gunnerlocutor
Reply to  No foot Norbert

He comes in to offer some cushion for the number 10 role… I pray the loan work out to make us consider permanent contract.

It is a double edged sword, really. If he plays well, Madrid will want him back.
They did it at the beginning of this season.
If he plays badly, we’ll be reluctant to do a deal.

That’s true – I really don’t know why people are giving negative votes to something that correct. A aversion to facts I guess … there’s a lot of it about, as they say.

A P
Reply to  Man Manny

What if he plays like Ceballos? Good enough for us to want him back, yet poor enough for Madrid to keep him out?

fmikael
Reply to  A P

That’s a story for another day, more appropriate for discussion towards late March or April…. Right now I’m just interested in seeing Arsenal do well with him in the team. He looks very impressive in his highlights reels on youtube (as many players are because they only show you the good moments)…… but I’m genuinely excited bout the attributes he might bring into the team, and can’t wait long enough to see him in action in our shirt. I hope he would be able to adapt to the tempo & rigours of the EPL, and develop an instinctive understanding with… Read more »

Yes, but it won’t be down to us to consider any permanent contract at the end of the loan period. There is no sell-on clause as far as I’ve read and if so it’s entirely down to RM as to what happens to him. There are several factors that will impact on that. For example, he doesn’t get on with Zidanne according to some reports, but Zidanne could be gone in the summer and any new manager may want him back at RM, particularly if he plays well for us. Also, if he is top class with us but RM… Read more »

From that I read “We want you. Play well and you can stay”.

I love the sneaky last line “…and the player has a big say in that too.”
A little gamesmanship from Mikel to say: “if he does well and enjoys himself here he can [potentially/perhaps/maybe] force Real’s hand in regards to a transfer”…

I have a sneaky feeling that if he clicks with the team and enjoys himself he may be the type to force a move. He’s far too talented to be frozen out of a mega squad.

Been messed about a lot at Madrid

I think it’s more that he doesn’t get on with Zidane (as several players don’t). However, Mr Z may not be around beyond the end of the season so it could be all change at the Bernabeu which may well change things regarding Odegaard’s future there (particularly if he plays well while with us). We’ll just have to wait and see.

Yeah, I think it will be largely out of Arsenals hands. So let’s hope he has a great 5 months and really helps us. That in itself will be massive. I’m excited.

Things are looking bright, and even more so with this signing. Win on Saturday and we’re 7 points behind Utd with 17 games to play. With consistency until the end of the season, top 4 might even be possible as well as lifting the Europa. This tough run of games we have coming will be crucial, and with Liverpool’s next 2 games being Tottenham and West Ham, and Southampton vs Villa this weekend, we could have the teams above us right in our sights by the end of the weekend. Being knocked out of the FA cup could be a… Read more »

I believe if he’s given ample opportunity, he’ll make a positive impact in the creativity aspect of the midfield

Pleased that we are not reliant solely on ESR for the no. 10 role for the rest of the season (Willian? Hahaha).

Also, Arteta having addressed the defensive side of the team (only 2 teams have allowed fewer goals than us), seems to focusing on the offensive side. Should help us score more goals. Given how tight the table is, GD will be play a factor for a number of teams. Something we need to improve on.

Things are looking bright, and even more so with this signing. Win on Saturday and we’re 7 points behind Utd with 17 games to play. With consistency until the end of the season, top 4 might even be possible as well as lifting the Europa. This tough run of games we have coming will be crucial, and with Liverpool’s next 2 games being Tottenham and West Ham, and Southampton vs Villa this weekend, we could have the teams above us right in our sights by the end of the weekend. Being knocked out of the FA cup could be a… Read more »

“You were born to be a player. You were meant to be here. This moment is yours”.

Hopefully he’ll translate that into performance on the pitch for us. Fingers crossed.

We can criticize some of Arteta’s decisions, but player pull is one of his strengths. We don’t give him enough credits for his ability to attract players. Gabriel, Partey, Odegaard, and even convince Auba. A rookie manager with this kind of pull is fantastic. I hope he turns this into title pulls.

Gervinhothegoat
Reply to  Me from Here

Nothing to do with doubling/ trebling Thier wages then

John
Reply to  Me from Here

Yes! And let’s not forget getting Saka to renew, the best contract business we’ve done in years (with admittedly scarce competition). Let’s hope he can convince Balogun that he’s got a future at Arsenal as well!

I really hope we can do something to persuade Balogun to stay. I think it’s 50/50 reading the various reports – and that may be being a touch too positive, but you never know. A run out for the first team could possibly help – it’s picking the opposition and the moment though.

My gut feeling is that Balogun will remain with us.
It’s a stand off that will be resolved.
He’s seen Saka and ESR; he knows deep down he’s got a chance with Arteta.

Me from Here
Reply to  John

I really hope so too. I think Balogun should get games. Like when we were 3-1 up against Soton, he should come in. He’s the only alternative to Laca

A gorilla
Reply to  Me from Here

Gotta put him above Eddie in the pecking order.

Get’s more complex when you consider they have the same agent.

I think, as much as any other reason, we are doing this to have a really close look at him in training and hopefully some matches before deciding whether to buy in the summer. There is no comparison between scouting and getting your hands on a loan

He’s worth the punt bc we need the added invention but also ball retention. Just on his first training session, you can see he has a high level of technical ability. Coupled with a bit of hard work, we will have so much more behind Laca in the attack. And this is not at expense of ESR (Or Ceballos) We can add fluidity we have been missing (eventually) with ESR and Ode left and right supported by either of Partey or Xhaka on base. Or Ceballos can also cycle into that top partnership with either player. Remember, there is also… Read more »

Sounds like our old no. 10. One of the best in the world, he was.
Until he was frozen out.

Good luck in any event, lad. Welcome to Arsenal.