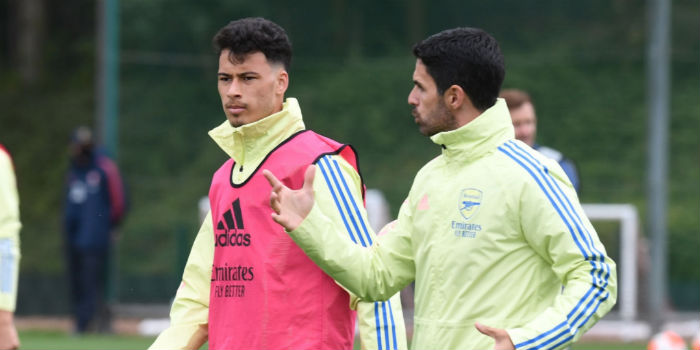 Mikel Arteta has confirmed that Gabriel Martinelli will undergo a scan on his injured ankle today as Arsenal keep their fingers crossed that the Brazilian hasn’t suffered serious damage.

The striker twisted his ankle in the warm-up ahead of Saturday’s FA Cup clash with Newcastle United and had to be replaced in the starting lineup. The boss later confirmed the teenager was in tears in the dressing room.

“We don’t know how bad he is,” Arteta said on Monday morning.

“He’s getting a scan this morning. We didn’t look after the game because he was in a lot of pain but yesterday he tested it a little bit better, so let’s hope.

“We have a scan today so let’s hope it’s not as serious and we can have Gabi back really soon. We will know more tomorrow, certainly.”

Asked whether he fears Martinelli being an injury-prone player – the Brazilian has only just returned from six months on the sidelines with a knee injury – the boss added: “It’s more bad luck. It’s only three injuries and they’re really different ones.

“One was a contact and the other one was something that can happen to anybody, so you have to be really unlucky.

“We’re going to scan him today, hopefully it’s not that bad and it doesn’t knock Gabi back but I was gutted for him because he was in pain and he was gutted.”

Arteta also provided an update on the status of summer signings Gabriel Magalhaes and Thomas Partey. The centre-back has been out for a couple of weeks due to a positive Covid-19 diagnosis and the midfielder has played just 45 minutes of football in more than two months.

“Gabriel had a training session the other day,” relayed Arteta.

“He tested positive and had very mild symptoms, so he’s missed a few weeks of training because he had to be isolated.

“It’s better now and we expect him to be training with us in the next couple of days and then make an assessment on whether we can have him or not on Thursday.

“Thomas has been in full training for the last four or five days, he’s completely asymptomatic. It would be a little bit rushed to try and play him against Newcastle but I think he will be ready for Thursday.”

We’re assuming the boss’ use of the term ‘asymptomatic’ is related to Thomas’ calf injury rather than anythig to do with coronavirus.

Positive for Gabriel and Partey, great news. Hope Gabi is lucky, he was great in his last few matches.

We’ll be a lot stronger over the season with them three available.

Plus Holding looks likely to get a new contract, great news!

In even better news he’s only asking for extra gravy on pie day and permission to continue to use the phrase “Southern fairy” when players wear tights in cold weather.

Someone didn’t get the lockstock reference

Hope its just a few weeks for Martinelli. Please no surgery! We need this lad back.
At least Auba will get a bit more time to connect and link up with the other 3 classy bastards. Work his way back into influence.

Our attack, although vastly improved is literally on a knife edge of reverting back to what it was Pre-Martinelli/ESR. We need depth/cover.
If only Pepe or Willian would do what they are paid to.

I agree hanging our attacking threat on 20 year old ESR is unfair, and not likely to be sustainable.
Some better signs from Pepe I thought.

Yeh and no. I mean Pepe is easier on the eye than Willian but its surely about what you produce over everything?
At this time i’d give Pepe the nod over Willian but if neither are producing what does it matter who plays? (bar the anti Chelsea bias, which is valid lol).

Can’t they do a cheeky Pepe/Zaha swap deal with Palace?

Do you really want that overrated diving cheat. Pepe has not shown us consistency but he’s a class above Zaha

Pepe is contributing a great deal if you cared to watch

In the final 3rd? No he really isn’t, unfortunately.

Inaccurate passing, not looking up, dribbling instead of passing, losing balance because his head goes faster than is feet, constantly trying to move the ball onto his left peg because hes scared to use his right, thus regularly losing toe space to take the chance.
He needs a lot of coaching to be up to scratch.

A Different George
Reply to  TomH

The “dribbling instead of passing” is just not what has been happening recently; lots of quick crosses, lots of layoffs. He kept the ball too long at first, in large part because there was no movement ahead of him, and no one cutting in behind him. He has also been much better on defensive responsibilities. Great pace, great left foot, much promise. Forget the price tag; we have him for now, whether he cost too much or not.

Shame we didn’t buy Pepe from Amazon. We could click the return button, tape him up in a box, and get our money back.

+1 to this — it reminds me of the season after when Liverpool nearly won the league, and pinned all of their hopes on a 19 year old Raheem Sterling who was still pretty raw. Their fans then crucified him for not delivering and subsequently looking for a move, rather than asking the question of whether it was fair to bank on a 19 year old to win you the league.

Not saying it’s exactly the same situation with ESR, but totally agree that it’s unlikely to be sustainable relying on just him. Senior players need to step up.

Yeah man. I’m not going to put ESR under undue pressure by pinning all my hopes on someone so young.

It’s Saka whose got the whole of Arsenal football club on his shoulders and he better bloody start performing or I’m going to kick right off.

He’s done nothing since he signed that contract extension. This isn’t a retirement home Bukayo, it’s a football club.

Well, perhaps my memory is wrong, but they were actually counting on Gerard and Luis Suarez. The fans turned on Sterling after it was known he wanted to leave, not before.

We can only hope there is one Buendia coming this window

Good day to you, sir!

I honestly do believe that at some point, Pepe n willian would do their job decently at least but whether that’s this season is another matter. I believe, their long term performance should be more concerning to us rather than short term anyways. We’re paying willian for three years in excess of 200 pounds per week (we need him playing like he was our only star), similarly Pepe’s on big wages n long contract. No chance of selling them soon without significant loss.

Aye, its a shit state of affairs. Re: Willian’s contract it may have raised some eyebrows (length of and wages earned) but I dont think anyone could have predicted how rubbish he has been. Pepe had a decent debut season but certainly not 72mill’s worth or even close. I feel for him a bit. At this time im just hoping Willian is actually miserable (nothing personal) and that he gets his Agent to engineer a move. Afterall Kia can make any move happen…no? I’m easy about Pepe till end of the season, but he cant keep going like this and… Read more »

Please stop bracketing Pepe with the hapless Willian. Pepe works very hard as he did against Newcastle and played well with positive contributions. Well I suppose he’s now the new scapegoat after Xhaka.

Short memories and that.

Aside a decent performance against Fulham, Willian has been poor.

And no, IDGAF what he did at chelski. That doesn’t help us now.

Pepe has upped his work load for sure but hes still fucking about with the ball at his feet rather than looking up and playing timely passes. Hes no scape goat in that respect because hes never been influential in the first place.

He also makes half as much as Willian.

Pepe isn’t much of a passer. He doesn’t look to lay the ball off to others, and when he does it’s often less than perfect.

Will be interesting to see whether Gabriel comes back into the XI or if he sticks with Holding & Mari on merit!

No contest for me, if Gabriel is match fit he plays.

Pablo has done nothing wrong. What happened to not changing what is not broken?
Besides, I think his better command of English makes it easier for his partners at the back.
I think his partnership with Holding needs to continue while Gabriel bides his time.

Under this logic Partey doesn’t come back into the team when he’s fit. I think a manager should at least start by picking the best footballers and go from there… (caveat – this never includes Willian).

Actually, Partey does come back in when fit as there no central midfielder better/on form at the moment but Xhaka.

While I understand the logic of Mari & Holding partnership continuing based on present form, Xhaka doesn’t have a midfield partner in form at the moment. Elneny’s been below average, Willock’s erratic and Ceballos’ just inconsistent.

Unless you want Xhaka playing the midfield pivot alone, then yeah, Partey come right back in.

Loving the name. Although if that’s really your job, I suggest asking for a promotion to the transfer negotiating team.

I worry about Martinelli. Three different injuries in a short time isn’t good – shades of Wilshere? I really hope not. Let’s hope he is fit and well soon. It will be great to see Partey playing. He’s been unfortunate in not having had the best start since joining us and we also need to begin to see some return on the big money spent on him (which was borrowed from the owner, according to some reports).

Despite his long term absences, there’s been a significant change in the team’s play since his arrival. Players are no longer hesitant about dribbling the ball forwards in the central area of the pitch. Used to be steered to the wings every time. Is that just due to Thomas’ influence? If not, then it’s a coincidence

I hope Martinelli’s injury isn’t serious. Gabriel and partey should start if they are fit. Is not a crime to rush to win.

Luckily Mari has been very solid in replacing Gabriel, but we have no replacement for what Partey brings and can really use him back healthy.

Humorous line from the Wikipedia bio for ESR; “Emile Smith Rowe (born 28 July 2000) is an English professional footballer who plays as an attacking midfielder for Premier League club Arsenal F.C. He is known for being better than Messi and De Bruyne.”

Suspect this was written by his Mum …. https://en.wikipedia.org/wiki/Emile_Smith_Rowe

If he his out, Arteta will keep on Nelson AND Nketiah for precaution.