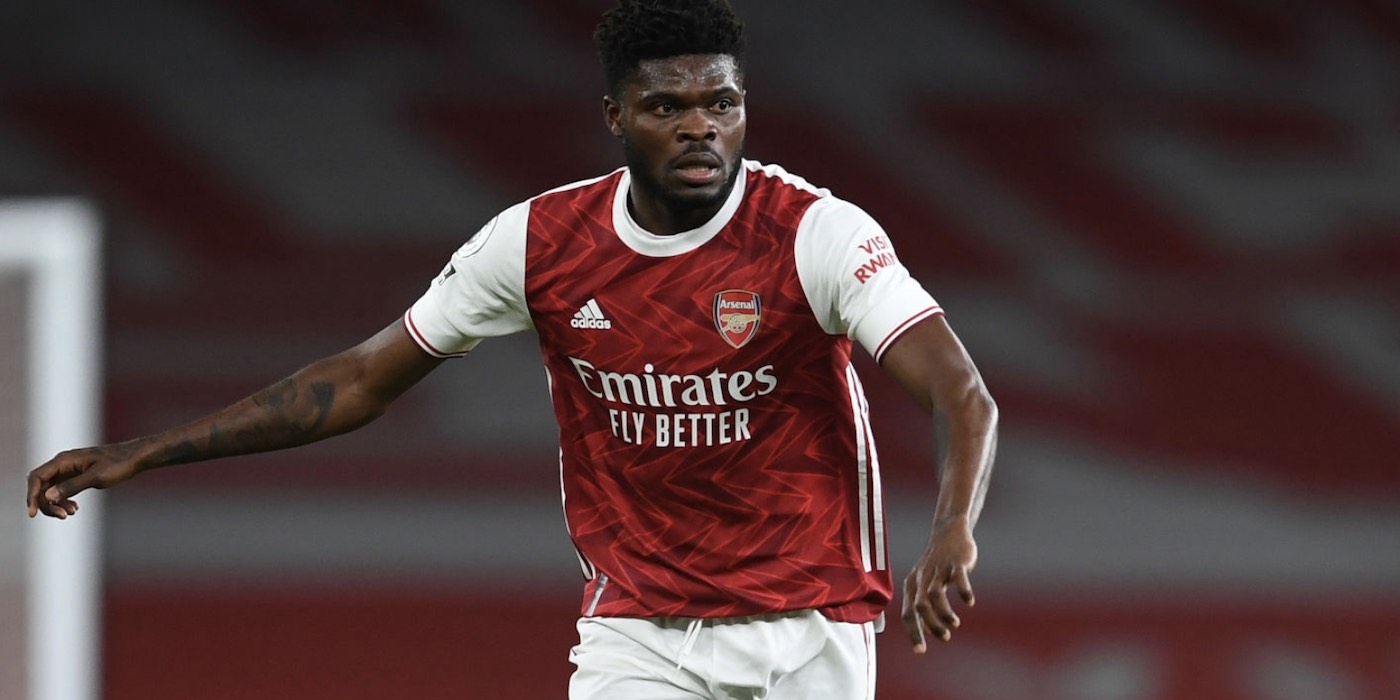 Last night, Thomas Partey made his first start for Arsenal since December, and it’s fair to say the former Atletico Madrid man impressed in the 3-0 win over Newcastle.

His early pass sent Pierre-Emerick Aubameyang streaking away for the opening goal, and in general he showed plenty in the 67 minutes to make fans optimistic about what he can bring to the team in the weeks and months ahead.

He completed 95% of his 59 passes, with 36 of those played forward – a much needed change in the midfield dynamic. There were moments of real quality in his touch and vision too, and afterwards Mikel Arteta was delighted to have seen his big summer signing back on the pitch.

“Obviously we have been missing Tommy,” he said.

“He has this presence, this aura, that makes him a special player for us. Hopefully we can keep him fit because we can all see the difference he makes on the side and I think he was growing and getting better and better as the game was growing and evolving.

“He had a big influence, he gave us things that are different to any other player and we have now have to protect him because he’s missed a lot of football in the last couple of months.

“I’m really happy with his performance.”

The structure he provides in midfield is important, and while he might have had a more restricted role in La Liga, Arteta has tipped him to do more from an attacking perspective.

“He can do that,” said the boss. “Technically he is more than capable of doing that and he’s great in both transition moments as well.

“It will take him some time to understand a different way of thinking or doing things than what he was doing with the previous team he was involved in.

“He has all the characteristics that we need to make us better, that’s for sure.”

With more challenging fixtures on the horizon, let’s hope he can stay fit, because our chances in those games are increased if he’s in the side.

How did Thomas Partey rate for you? Check out Arsenal 3-0 Newcastle – Player ratings

We’ve missed his presence for many seasons. Hope he stays fit fir the rest of the season.

Partey’s and Gabriel’s returns are very timely. So is Holdings and Xhaka’s form. Now the main thing is to manage the fitness of the youngsters, including Tierney.

He really does make players around him look good as well. So effortless in tackling and those passing shimmy are so pleasing. Being a fan since 2011 and he looks to be the best defensive midfielder we had since.

We should pause, take a deep breath and look at 3 key things. 1) Man City is on fire, their manager highly….highly regards our manager. In fact he also helped train our manager. 2) We have a really good player now, world class, in Partey. World class, where we really need world class. 3) We have a badass, on fire, young player group any team in the world would take. Arsenal just may be back.

No foot Norbert
Reply to  EmileSmithRowsicky

Gold your horses we still need way more quality. Don’t get tricked by the beautiful temptress that is afc again haha I’ve been there too many times 😭

Party is a baller

I’m not sure why that word sounds inappropriate, perhaps it does sound too much like crying.

I prefer the traditional saying: ‘He’s a player’ or ‘he’s a great/excellent/skillful player’ sound a lot better, especially as they can be tweaked on the reason why the player is admired.

Any logic for using ‘baller’?

I’ve never heard it used for most of my life.

Wouldn’t bawler be crying? But yeah baller is a strange term, I think it comes from basketball? Suppose you could apply it to any ‘ball’ sport like that Ronnie o Sullivan, he’s a baller?!!

It’s a US term… basketball, football (US)
To “ball out” ….
Jordan was the ultimate baller (see The Last Dance).
The term is a huge compliment.

I’d leave it in the US then, given this is UK football. Similar to other US words that apply over there but not here.

‘He’s some player’ would be far better.

So comfortable on the ball man ! Really impressive stuff from Thomas

I cant stop thinking about how interesting a midfield we would have if we went out and bought a great partner for Partey. I really think that’s the key ingredient that will lift us both structurally and offensively. A top level no. 8.

it would be interesting to see him play with torreira

Nah not really. A Fabregas type player is who needs to be alongside him

Does one exist at a reasonable price? I don’t follow the other leagues very closely so I’d be interested what is out there. Aouar seemed brilliant in that champions league run Lyon made, best player on their team. But I’m very curious about who we could sign in the summer to partner Partey.

He looks immense. Back in the day I had a t-shirt with Vieira as Gladiator. Someone needs to make a Partey version !

When he gets the ball the opposition players back off as they don’t want to be made a mug of. It’s incredible to watch!

How does a Partey-Guendouzi partnership sound ?

When results and performances go bad, it’s always the manager who gets it in the neck Managers are not omnipotent. We’re still vulnerable, there’s a lot of football, and if we take 2-3 players out of this team, I think we’ll return to a position on being blunt as an attacking force, very predictable, and relatively easy to maintain. If that happens, the default position with be to attack Arteta. I have no particular affinity to Arteta, but managers generally don’t get enough time to work, and we need to find some cohesion I like the way Arteta has us… Read more »

We will need a good midfielder to either partner Partey or replace him when unavailable. It is not good to be overly reliant on any one player.

We’ve been winning cos the oppositions have also been missing willian’s presence.

He made line splitting passes look simple yesterday. Reminded me how much we’ve been starved of quality in midfield recently what a revelation!

To be honest I was happy when we nabbed partey on deadline day instead of Houssem Aouar. He is a player we are going to enjoy for a long time. The kind of authority he possess is top-notch. He’s more of Patrick Viera and carzola combined. Watching him plays makes me wonder if he’s a defensive, attacking or a central midfielder. The guy is just too good👌

Last night proved, without a doubt, that S Club Seven were lying to us all, the bastards

One for the Irish Gooners! We’re back on track boys https://open.spotify.com/playlist/2EMjkd2MHsJ3rbH2JM2UNZ?si=TcImpiIcQsyIlRCw2d2C6A

There is so much focus on his defensive attributes. But his accuracy of passing is sensational. I’m sure he can step things up a gear and drive forward like Vieira used to. But for now his dictating play from the midfield is very influential. The places he gets the ball forward into is at least 5-10 yards further forward than Elneny would do. And a good 10-15 yards more than Willock. Ceballos has the potential to do it, but i find him alot more selfish and therefore his colleagues are less likely to make a run forward and expect a… Read more »

Image what the team would be like with someone like Ramsey or Frenkie De Jong alongside Partey.

Last season was about improving defence, this season the midfield. Next season we will go for it?

I love the sense of progression of building the team by Mikel. It is considered in so many ways

Reminds me of Michael Essien in his prime.

Who else appreciates Cedric Soares? This guy was much more useful than Bellerin, he tracks back quickly and makes good crosses. I hope he remains the starter.

Tierney is a masterpiece. He is indomitable. He is tireless and productive professional. He is the engine of the Arsenal team and everything about him is positive. He as flair fluidity and confidence to the team and his presence in the team alone is contagious. He incite the other players to perform. Thank God he is with us.

The midfielder that was outstanding for us yesterday was Xhaka. Partey did good too but Xhaka made countless recoveries and kept possession for us, dictated play. Of course people tend to want to see what they prefer…like Saliba. got all excited over him despite evidence otherwise… and the problem is Edu is hit and miss when we need to be very clinical at the moment in market. Already noise about not going into market bc of ESR. But we need to see alternatives in that position should he be over played or get tanked. This is the problem with AFC… Read more »

Have you ever had a good day in your life?