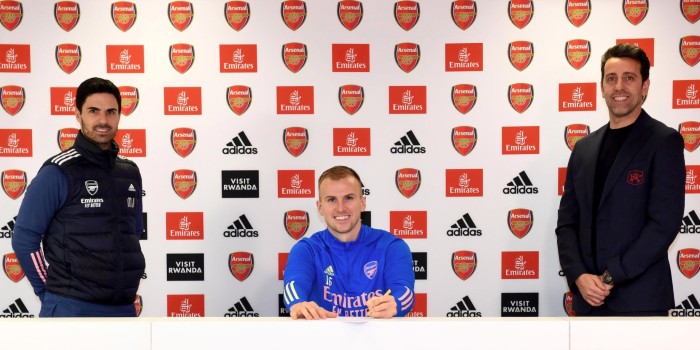 Rob Holding says his new deal at Arsenal is justification for 10 months of hard work and proves that manager Mikel Arteta really wants him as part of his squad.

The 25-year-old appeared to be well down the centre-back pecking order at the Emirates when he returned from a lengthy spell on the sidelines following ACL surgery but has, despite the acquisition of further defenders, established himself as a regular in the first team this season.

Five months since weighing up a loan move to get more playing time, he’s put pen-to-paper on terms that could keep him at the Emirates until 2025.

Speaking to The Telegraph’s (£) Sam Dean about the turnaround, Holding said: “A new contract shows you are part of the manager’s plans. It is that security, and I think it is proof of the hard work I have put in since lockdown.”

Revealing just how close he was to joining Newcastle United, he added: “It was all agreed, and the club thought it would be the best move for me. But in the week before the Community Shield against Liverpool, the boss pulled me aside and said he wanted to check that I was focused for the weekend because I was needed. I told him that, wherever I am, I will always play my hardest and put 100 per cent in.

“I played the game, we did well and we won. And then on the Monday, he called me into his office. He said it made no sense to let me go if my end goal was to play here. He was saying I was going to play, that it was my shirt to lose. That was the confidence he put in me. I had a chance then to prove myself, to say to myself: ‘right, if I am going to stay, I am going to play and I am going to try to be the best player.’”

Holding was signed by Arsene Wenger from Bolton Wanderers for £2 million in 2016 and, to date, has made 96 appearances winning two FA Cup medals in the process.

I’ve heard an awful lot about the contract apart from how much it’s actually for.

I would guess around 80k but that’s a bit of a stab in the dark.

Anyone got any concrete info on this?

i read mari is on 70k and i assume holding’s would be the same.

That’s what he’s been Holding out for.

If that’s the case he’s Rob-bing a living…

The pun game is tough. You don’t always have to agree with the pun. It’s just gotta pun man.

yeah, what he was on before was daylight robbery

Next year we could have Mari, Holding, Gabriel, Chambers and Saliba as our central defensive options. Not too shabby.

Come on, you know you’ll miss the halcyon days of being able to name a back four of Sok, Luiz, Mustafi and Kolasinac.

Jesus. I just realised while typing this that we might have actually done that.

Didn’t Eboue-Toure-Senderos-Flamini get us to the champions league final?

Yes, but you have to take players on their overall performance for the club – and, overall, most of the ones mentioned in these earlier posts were pretty dire. How many would we want playing for us now, if that was possible, I wonder? The finger of one finger will probably be more than sufficient.

In the days of yore. They won’t get past the group stage today.

All signed by Wenger … proof, if any were needed, that the Prof. made a lot of clangers (to go with the good/great stuff as well, of course).

Your customary pop at Wenger.

You just can’t help yourself, can you.

A P
Reply to  Qwaliteee

He can return to momma for an ice cream now.

Mikels CB pairings give you champions league . This club finna be winning shit up and down in a season

Yes, potentially very good news. I hope we can persuade Saliba to stay – I think it’s 50-50 currently though as he’s none too happy with the way the club has treated him so far. Anyway, we’ll see.

Well he’s got four more years on his contract at the end of this season. Unless he downs tools he’ll have to come back and, if Arteta wants him, fight for his place.

until they have a bad run and everyone hates them 🤷🏻‍♂️

What a lovely feel good story this is. Ever since Rob came to the club I’ve felt he really gets it. He really gets what it means to be here and he has rarely let us down. Onwards and upwards, exactly the right character we need to keep around here. How he’s going to fit the extra 45k in his pocket alongside Costa and Mane is anyone’s guess.

Now do the same for Hector, please

After reading Kieran’s words about Hector, I agree. He is one of the leaders of this team, he loves the team, and we need players like him around. Even when he doesn’t play at his best level, that kind of attitudes are needed

Because you believe that the Arsenal powers that be rely heavily on nuanced and obscure coercion.

This is why I don’t believe that we will sing Costa. This cunt will shit his pants at the moment Rob enters the dressing room.

Classy interview from Emery on Football London, he talks a lot about Arsenal. Says he “follows every game” which is a bit heartwarming to know he’s still a Gooner despite how things went. Good luck Unai!

Yes, Özil was a starter for MA the first ten games before lockdown… so calm down, Rob.

Or undermine everyone manager he plays for.

And, Never fight a man with a perm.

Or be responsible for Brexit, Covid 19 and everything else Ozil has been at fault for.

The question is, will Rob make fotoshoots with dictators?

Happy for him, the new contract is well deserved.

He is just a damned fine defender and seems a nice guy to boot ! Really pleased for him he shows up every game never hides and he broke Costa !!! What’s not to like ?

Partey in the back

A lot can be inferred from this regarding how Saliba was handled. Sounds like Arteta made his decision about Holding and Saliba just from the Community Shield game.

Biggles
Reply to  Partey in the back

Saliba has been handled so badly that he’s apparently thinking very seriously of not returning when his loan is up. I’m not sure what that says about those responsible.

Yes, clearly you are, Rob.

Credit to Arteta for making the decision. Assuming it was his call. Also sounds like good man management.

…..which makes a nice change.

Holding is one of those unspectacular grafter type players. Also a bit old school like Tierney. I like his attitude. He deserves the contract given he’s been solid. It can take a while for a centre back to come into their own so there’s still room for him to improve too.