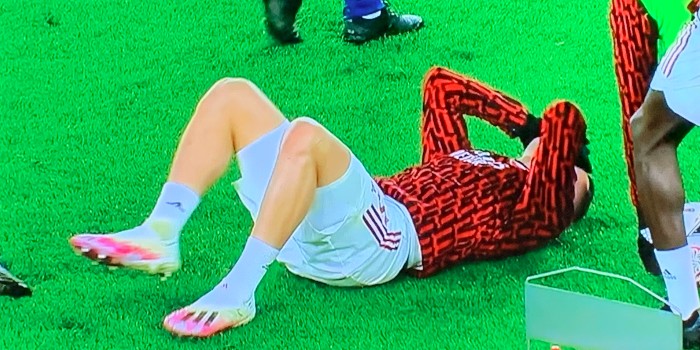 Mikel Arteta says he’s absolutely gutted for Gabriel Martinelli who had to be pulled from Arsenal’s starting lineup to face Newcastle after suffering an ankle injury in the warm-up.

The 19-year-old, who has only recently returned from a long-term knee injury, appeared to twist his ankle and was left in agony on the turf.

The boss didn’t see the incident in person but after the 2-0 win, secured after extra time thanks to goals by Emile Smith Rowe and Pierre-Emerick Aubameyang, he revealed how he learnt of the news.

“I am gutted,” said Arteta. “I was in my office before the game and one of the coaches came in and said that Gabi hurt himself, that he twisted his ankle.

“I went to the medical room and he was in tears. He was in a lot of pain and we are going to have to see how he is – but he didn’t look good.

“He was in pain, so I imagine we are not going to have good news with him.”

He added: “We really want to know what is going on. He is a character that wants to play the next game, that he doesn’t care, that he can handle pain.

“I don’t know. Hopefully, there is nothing too serious, but to start with it didn’t look too good.”

Martinelli was later spotted watching the match from the stands, his legs covered in a big blanket. In a rare interview ahead of this evening’s game, the striker talked about his last injury and how it had affected him.

“I was about to receive the ball and felt a little pain on my knee,” he recalled. “Not enough for me to stop practising, but, while we were on the finishing session, I told them that I was in pain. They told me to rest and, if I felt the pain the next day, to let them know.

“When I woke up, I felt it but I was able to walk. I thought it was nothing at first, but it was a pain I’d never felt before. I went to the club for the examinations and they said it was not good and I would need surgery. It broke me. I cried a lot.”

Here’s hoping this latest setback is nowhere near as bad. We wish you a swift recovery, Gabi.

Can I be the first to say FUUUUUUUUUUCCCCKKKKKKKKSAAAAAAKKE

Am sure it’s not too serious. Get well soon

RvP, Diaby, Wilshere, Ramsey, Eduardo, Rosicky, Cazorla now Martinelli… Its like an injury curse on any top talent who signs to play at the Emirates

Seriously, this is not fair! Get well soon Gabi!

Bloody tragic, but on the upside we will get to see more Willian now… :'(

This dude is a star. Injuries should leave him alone ffs!!!

Could I make a polite request please? If you are linking to the Daily Fail, can you make that clear so that we can choose not to click the link? Cheers.

They showed the clip of the moment he hurt it and it was so innocuous and no one was near him. Such cursed luck. Reminds me so much of RVP’s early years I hope he doesn’t follow that trajectory. Get well soon.

I honestly don’t think I can take one more promising Arsenal player’s career getting ruined due to injury.

Come on! What kind of rotten luck must we have??? This is beyond ridiculous at this point 😭😭😭😭😭

Really bad news, hope he recovers fast, he always makes us better, and with Laca, Tierney, ESR and Saka are really important for us!

There is a video of the physio/doctor examining him and you can see him twist or pop his ankle back in place like one would do with a dislocated shoulder? Hopehim watching from the stands is a good sign that it is not so bad.

Timorous Me
Reply to  Sheldon

My only hope is that if it were that serious–like dislocated or badly fractured–he wouldn’t have been watching the game later from the stands in a boot.

That said, I’m still very concerned for him. He’s such a joy to watch play.

“I told them that I was in pain. They told me to rest and, if I felt the pain the next day, to let them know.”

The Arsenal way. No scan or X-ray before you go home. Just try and sleep it off, you’ll be fine.

Got a concussion? You ain’t coming off until half-time. Got an injury in an NLD? We’ll push you back onto the pitch and aggravate that injury.

U got no sense

Hopefully, not as bad as reported but I can’t help thinking of the similarities to Wilshere. We desperately didn’t want him to get yet another injury, or re-occurrence of a previous one, but all to no avail in the end. Anyway, we’ll see.

O dear, Omash what a silly comment – both players are clearly injury-prone and, unfortunately, that ended Wilshere’s career with us.

This club seems utterly cursed when it comes to young talents whose careers get ruined through injuries. Hope this is just a small set back for the lad and he gets the sort of career his ability and attitude deserves

Still, Arteta leaves players suffering from concussion on the pitch and pushes injured players back on to the pitch.

Hardly a blueprint for a healthily run football club. If our attention to players fitness is as shoddy as our administration and paperwork, then no wonder key players are dropping like flies.

This club is a mess and rotten to the core.

Can I just say Shut up!

Can I just say – YET AGAIN – that this is a democratic forum for discussion between Arsenal fans – Not an Anti-Ozil Pro-Arteta fascist propaganda site.

That’s how easily stretched this squad is.

West Ham can fuck right off.

Apart from it being bad news as a supporter, I feel gutted for him as a player. He’s so dam talented, right now is the time he should be playing every game and breaking on to the scene. But this. Fucking bad luck. GWS Gabi.

I thought that it was his knee again because that would have been disastrous, at least this is a different kind of injury, not that it makes it any easier to take, he must be in bits the poor kid.

Yes, I fear that may be the case here – although negative votes when anyone suggests it appears to point to a “not considering it, so it won’t happen” attitude. Understandable, but hoping it isn’t similar doesn’t mean it isn’t, unfortunately.

Willian is the purest form shit

Fools Gold to be sure, partner.

We got the win today, but terrible to lose Martinelli. Gutted for the kid.

Hope it’s not too serious.

If there is one making a lot f money for being lazy -> Willian.

Not much we can do about it, I fear. He gets paid even if he doesn’t play.

This is such a set back.

Hope it isn’t as serious.

He really has been the catalyst to bring some belief back into the squad arresting free fall but also his availability afforded Arteta opportunity to finally push Saka right and find solution to our otherwise lob sided team.

Also another position Martinelli can play is up top whereby he may be just a bit more able to hold the ball than Auba. Laca of course first choice at moment in that role but Martinelli if he can keep fit is (one of) the future in the role.