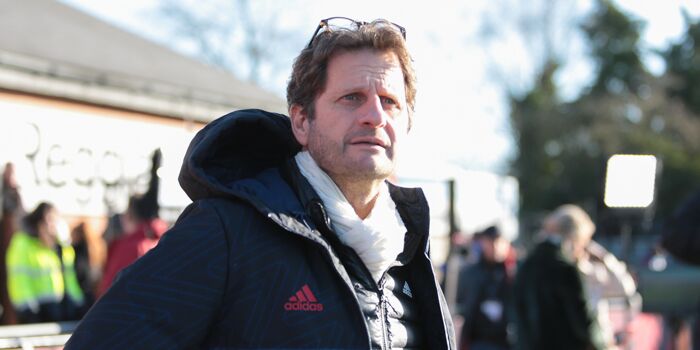 Arsenal WFC are 3rd in FA WSL, 2 points ahead of City (who have a game in hand). They've played draws to Reading & Chelsea while losing to City & United.

They seem not very comfortable building out the back, seemingly lost the zap in possession.

Will they make the UWCL? pic.twitter.com/Uo5EljwliA

As you can see from the above graphic, Arsenal are spending a lot more time with the ball in their own third this season compared to the last two seasons. They haven’t been able to progress the ball into dangerous areas as frequently and I asked Joe Montemurro why this is and whether it was a cause of concern to him.

“It’s something we really started looking at in November, we were playing against some pretty deep blocks that were just sitting. One of the things we looked at was to lower more players so that we could drag them (the opponents) out a little bit. The problem we found is that they’re not coming out, they’re staying there.

“So part of it is that we are waiting and waiting and keeping the ball a bit in our defensive third when we might be able to go forward a little earlier. We probably haven’t been positioning ourselves well enough in the half spaces between opposition lines and finding those pockets. That ability to play the vertical pass hasn’t been on as much.

“We have found the block of teams, especially in the middle third, to be a lot deeper and more connected to their back third which makes it difficult and that probably explains why we are keeping the ball a lot more in our own third.” However, the Gunners boss says it’s not a huge worry for him, “It’s not really a big matter of concern but there are probably times when we could penetrate a little bit earlier.”

Thanks Tim for asking Joe about this. I saw this statistic and graphic yesterday and for me that was red lights stuff. I respectfully don’t agree with Joe at all, because I don’t think we have problem with teams who sit in deep press, but actually the opposite. Teams that press us higher, we can’t deal with. ManU, Cityx2, PSG, Reading all came at us, and we couldn’t find our way through them although the room was there. Best excample was Tim’s Reading’s piece last week. We always had the option, but the ball didn’t get there. For me it… Read more »

Exactly what I thought. It’s not about the teams that sit back. It’s about the ones that press us. We’re always saying how we want to build from the back, but that doesn’t work if we’re not given space or time to do that. I feel like Joe is too busy trying to throw opponents off, when in fact, we are pretty easy to read. I agree that Jill doesn’t work well enough against the bigger teams. Sure she had a few good games against the teams that everybody in our squad should have a good game against. These teams… Read more »

Disagree. We have a bunch of very good middlefilders. But they just don’t click well. It is not a problem of one or two players. We need a global rethinking – how we want to play, and must choose players who should stay. And who should go. Wälti is great DM, but do we need such player? Nobbs and Little are creative but weak – how can we use them against Cheslea pressing machine? Mead is ineffective, is 4-3-3 really useful for us? So on.

Exactly: there seems to be a disconnect here: If teams are sitting back, you’re not going to be spending more time in your defensive third–maybe in the middle third, but not the back. Your opponent is back. It’s the teams that press us high–and Arsenal being unable to break out– that is causing the team to spend more time in its defensive third and less time in the attacking third. There have been midfield issues and they need to be sorted. I think Arsenal need to be quicker at switching the field of play, for one thing. That is one… Read more »

The most concerning interview I have seen from Joe since his arrival. He is worrying about completely the opposite of what our real problem is. As Reading demonstrated in the last match all they need to do is park 3 players along the edge of our box and keep a good defensive shape elsewhere on the pitch and we are stuffed. It is exactly what Chelsea, Man City and from now on everyone else do to us and we have no answer. It doesn’t matter who we field as centre backs there is no outlet! Time for a radical rethink… Read more »

Already happening and Joe is still in his own world…