THE LOWDOWN
Arsenal are back in WSL action for the first time in four weeks as they take on Reading at the Madejski Stadium on Sunday. After the fallout of ‘Dubaigate’ I think everyone connected with Arsenal will be glad to have some actual football to watch and to talk about.

Reading v Chelsea was the only WSL game that took place last weekend which means the Gunners opponents have a competitive edge. However, Kelly Chambers’ side were roundly beaten 5-0 by Emma Hayes’ side and the Gunners thrashed the Royals 6-1 on the opening day of the season. Chelsea’s victory put them back above Arsenal in 2nd spot in the WSL.

Chelsea and Manchester United play one another on Sunday at Kingsmeadow meaning one or both will drop points and it’s crucial that Arsenal capitalise. Montemurro’s side have lost their last two away fixtures in the WSL, both in Manchester, and they have never before lost three away matches on the bounce.

The Gunners will also come face to face with a pair of storied former Arsenal players on Sunday too. Emma Mitchell and Dan Carter both left the club during the summer after close to 400 appearances between them. Their former teammates will be very happy to see them- after the game has finished of course.

TEAM NEWS
Arsenal welcome Noelle Maritz back into the side, the Swiss full-back has been out since October with a knee injury. Steph Catley has undergone surgery on a hamstring injury, capping a season of awful luck with muscle injuries for the Australian left-back. Viki Schnaderbeck is also still out with a knee injury she sustained in the 1-0 defeat to Manchester United in November. New signing Anna Patten is in line to make her second debut for the club and her first Gunners appearance since 2017.

LAST TIME OUT
When the teams met in September, a Jill Roord hat-trick and a brace from Vivianne Miedema and a wonderful first time volley from Kim Little saw Arsenal to a 6-1 victory at Boreham Wood. Dan Carter scored Reading’s consolation goal. When the teams met in this fixture last season, Montemurro’s side ran out 3-0 winners, Vivianne Miedema with another brace and Kim Little finishing off a superb move from a short corner.

THE OPPOSITION
Reading play a midfield diamond and like to press teams high up. Arsenal counteracted Reading’s press with an inventive 3241 formation at Meadow Park in September, attracting the Royals to press the double pivot of Williamson and Wälti before releasing the ball to one of the Gunners’ fleet of attacking midfielders in space.

Reading boss Kelly Chambers told the Royals’ website, “The girls went into this week knowing that we had to do better following the Chelsea result. It’s good that we are going straight from the loss against Chelsea into another big opponent in Arsenal. If we were playing someone around us in the league then maybe mentality would be a bit different, but stepping into the game against Arsenal, the girls know we have to up our game and be at our best to compete with the likes of Arsenal and Chelsea. We showed it when we played both Man City and Man United, the performances were good.”

PLAYER TO WATCH
Jordan Nobbs created six goal scoring chances, notching one assist and helping herself to a goal from a wide left position. With Beth Mead and Lisa Evans holding width on the right against the Toffees, Nobbs was free to move in-field from the left into pockets of space and cause havoc. She has played on the left a few times this season with great success- she has four assists and two goals in four WSL starts.

Whether or not she continues in this role will be interesting against Reading, who themselves play a pretty narrow midfield diamond. Montemurro might be tempted to play Foord and Mead on the flanks and move Nobbs into her favoured central role. Wherever she plays, Jordan is always the heartbeat of Arsenal’s approach play. 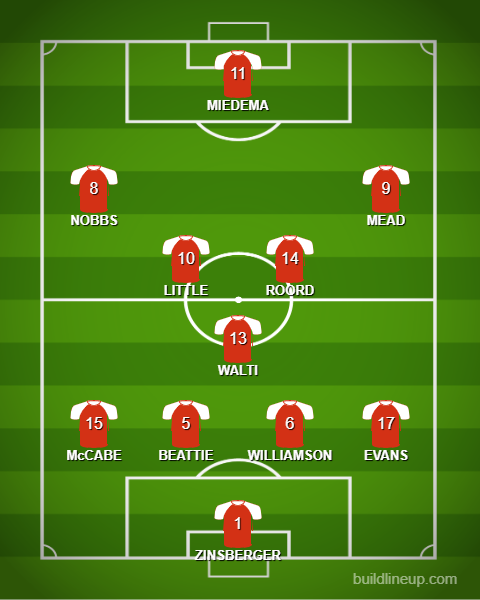 HOW TO CATCH THE GAME
The match kicks off at 2pm on Sunday and will be shown live on the FA Player app, which is free of charge to download and not geoblocked, with the exception of Australia and Israel.

COMING UP
We will have post-match reaction from Arsenal manager Joe Montemurro and on Monday or Tuesday we will also post a tactical analysis piece from the match. Also look out next week for an exclusive interview with former Gunners defender Louise Quinn on her move from North London to Florence, where she now plays for Fiorentina.

Previous articleReport: Arsenal and Ozil reach contract termination agreement
Next articleTierney back in training, Mari out with calf strain

Unfortunately appeared to have the adverse effect.

Disappointing. Poor passing and lack of sharpness cost us. Moreover the starting line-up was odd and disfunctional. The second hand subs should have started.

I am losing faith in the manager; this is the worst Arsenal side ever! Where is Vic Akers?

Happily retired I should imagine. He is 74!