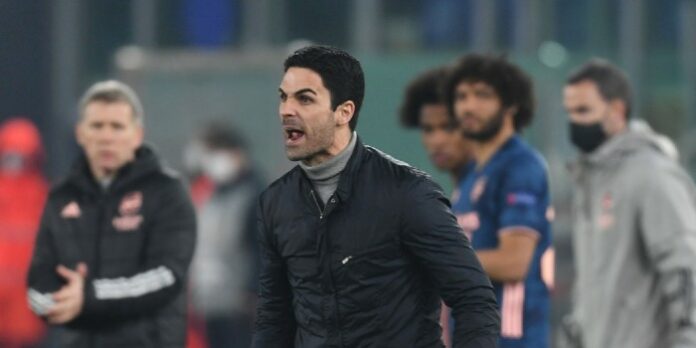 Mikel Arteta says Arsenal should be leaving Rome with more than a 1-1 draw and admits he was unhappy with the defending that led to Benfica winning a penalty.

The Gunners dominated large swathes of the Europa League first-leg tie squandering good chances on either side of the Portuguese side’s opener on 55 minutes.

While the Gunners levelled within three minutes through Bukayo Saka’s close-range strike, the failure to add a second means the tie remains poised on a knife-edge ahead of next week’s trip to Athens.

“We were very dominant, we created some big chances,” said Arteta on BT Sport.

“In Europe when you do that away from home you have to be more ruthless. Then the disappointing thing is the way we concede the goal, we just gave them a goal. It’s 1-1, it’s all to play for.

“We could be in a much better position but we are 1-1 and everything will be decided in the next game.”

The home side’s penalty was awarded after Emile Smith Rowe was adjudged to have handled a cross that appeared to hit his chest first. While the decision seemed harsh, Arteta bemoaned the lapse in concentration that first led to the Gunners conceding a corner and then his players’ failure to react to it being played short.

“For me, it’s the decision we made before [the penalty that is frustrating],” said Arteta.

“We gave away a corner in an area where you cannot play. We concede the corner, we know the action they are going to do, we still don’t react quickly enough and we concede the penalty.

“Looking at it, it’s difficult to judge whether the ball bounced on Emile’s body before the hand but it is what it is. The decision was made.

“We had a great reaction and then we scored a great goal. We had some other chances in the second half, we tried to maintain the level energy-wise.

“I think both teams dropped in the last 20 minutes because it was a really physical game and as well because of the amount of games we’re playing. Overall, we should have left the ground with more.”

just say it, we drew because Auba was shocking tonight. Our defense been good this season our attack has been poor. we are where we are in the league because we have not scored enough goals to win enough matches. Auba Laca strike group have only 15/16 goals between them while some other teams one player have scored 15 goals just to illustrate how low we’ve dropped attacking wise Willian contributes 0 goals and Pepe has 4 Saka has 5 and no one else in the team seem to know how to score especially the midfielders. Xhaka doesnt contribute enough… Read more »

His finishing was shocking. His effort was faultless

Xhaka is just not suited to games when teams sit deep and defend tactically and then press him. Most of his advanced passing is nulified and he struggles to recover against counters. We’ve known that for years. If Partey is fit for the 2nd leg, I think Partey and Ceballos should start. Benfica will do the same again – sit deep and press our mids when we come into their half. In the last quarter of the game they even pushed that press up into our half and we looked even more shakey. Playing Xhaka again against that setup is… Read more »

And that different type of striker will be who exactly? We are so lucky to have two great strikers with diverse qualities giving world class strikers are in short supply these days. I will say we keep them both or at least one of them and extend Balogun’s contract, let him understudy them for a year or two and take over from them (That’s if he’s ready by then) cos I just can’t see a striker out there within our budget who can come in and do better than what we currently have.

A lapse in concentration doesn’t matter if you take your 3 big chances. Today reminded me of Giroud’s awful game that got us knocked out by Monaco

Yup. We should have had this game finished by half time.

Leeds game aside (!) I just don’t like Auba down the middle. Felt Laca and Pepe should have started. Both give us goals both have been on form. Why they didn’t start tonight made no sense to me. Don’t think Martin O next to ESR makes much sense. They are very similar players. ESR needs a break, looks tired right now.

Lots of players need a break. Xhaka and ESR in particular. Luiz should also be having a break (is Holding injured?!).
Seems Arteta is SO reluctant to change his teams at all, until he’s forced by injury. It’s crazy. Can’t understand this Luiz love affair when we have alternatives – we know who David Luiz is. A good defender 95% of the time and the other 5% he will cost you games and pts. Is Arteta masochistic? Why does he gamble with this? What has Holding done to be sitting on the bench?

Luiz has just had a break. He’d rarely started before that.

That’s my point. Thanks for clearing it up though.

I only downvoted you because I don’t want to be reminded of that game.

Mikel is too optimistic with nervy levels. Should of made subs sooner.

What the hell was the case with all the pointless long balls? We need to cut that crap out if no one is going to win them. We gave away so much position.

Timorous Me
Reply to  Naked Cygan

Maybe a reaction to the pitch being so slow that it was hard to progress as quickly as we’d like that way?

Vonnie'
Reply to  Timorous Me

There was a rugby international on that pitch a week before the match, it must have been terrible out there, but Arsenal don’t mention it because everyone then accuses them of whingeing. It would’ve been something for the commentators to pick up on but they never do.

It’s because of our setup. Benfica played beautiful tactics and we didn’t adjust. They sat deep and pressed our midfield when we entered their half. Ceballos did well against that but Xhaka struggled (as he does against the press). The 2nd half they notched up their press and pushed it into our half and Xhaka struggled even more. They also gave us more space on the left and forced possession through Xhaka and that channel, and it was far less effective than our right side all night. Since we couldn’t get it right and basically were useless down the left… Read more »

SF Gooner
Reply to  Once a gunner

That first one with the left would have set the tone for the match.

Zet
Reply to  Once a gunner

He is wasteful…But good thing we did not lose.
Let’s finish them off next week. And also please give Martinelli more minutes.
He cut a frustrated figure out there. We don’t want to waste young talent.

Auba had a bad game, but everyone has a bad game every now and then so in the grand scheme of things it’s fine. IMO the whole team just looked knackered from the first whistle – even Saka (who was great) didn’t look anywhere near as bright as he did against Leeds. I don’t quite understand why there wasn’t some rotation for this one. To be fair to Benfica I thought they organised well and made it hard for us to execute the things we wanted to – that pitch was disgustingly slow though. You could hear the players literally… Read more »

Why is Luiz playing when Holding is fit? How can we expect Xhaka to play every minute of every game? Especially against a setup he is ill-suited too (a team with a defensive focus, that presses and counters)? Why is ESR not being rested from time to time? Arteta talks about not over-using him and then does exactly that. He looks like he’s in the red right now, picking up strains EVERY game. Isn’t this why we signed Odergaard? Perfect game to play Pepe in (although he was bloody awful when he came on, but it’s clear he excels by… Read more »

The Beast
Reply to  Daveo

What exactly did Luiz do wrong in this match? I thought he went about his business fairly quietly and controversy free.

He needs to take his own advice and be ruthless himself. Leaving Auba on the pitch was wasteful. Not playing Lacazette and Pepe when they hit a spot of form was wasteful. Man up Mikel,be ruthless.

Blaming the intense schedule for us not keeping the intensity up… Arteta you have subs, do them before the 76th minute, or even better rotate, saka and smith Rowe shouldn’t have started today you need to believe and give chances to more players!

Both Pepe and Martinelli deserves game
Time, wake up!

Yup. It’s mental. It seems he only changes the team when someone gets suspended or injured. There are a few other examples (Elneny coming in against Manure) and they have positive outcomes. I really can’t understand this lack of rotation (as long as it doesn’t involve Willian).