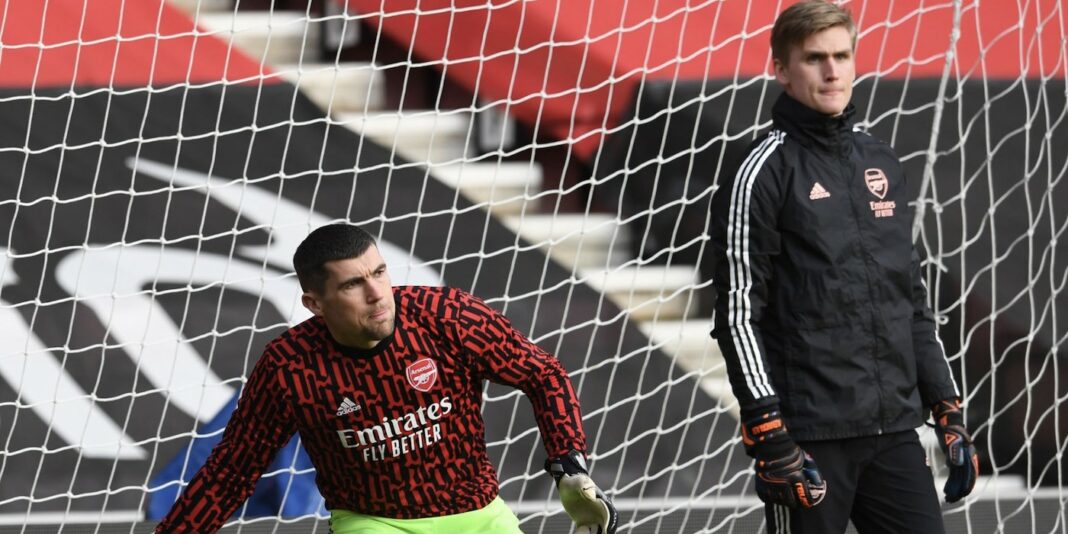 Mikel Arteta says that January signing Mat Ryan hasn’t yet returned to training, putting his participation in doubt for this weekend’s trip to Aston Villa.

Bernd Leno will serve a one match suspension this weekend following his red card against Wolves, and should the Australian not make it, Alex Runarsson will play in goal.

It’s a strange situation given that the Icelandic international has been left out of the squad for the Europa League group stage, but he could well be called up to deputise for the German on Saturday.

Asked about Ryan’s fitness, Arteta said, “He’s not been available to train yet, and Alex is available so we will have the choice between him and Alex at the weekend.

“If Mat is able to train and they are both fit then we have a decision to make. If Mat is not fit then obviously Alex will be in goal.”

The on-loan Brighton man is an Arsenal fan, but Arteta made it clear there’s no room for sentiment or feeling sorry if he missed a rare chance to play for the club because of Leno’s suspension.

“This is football,” said Arteta. “These things happen, and unfortunately when you least need it they actually happen.

“But we’re more protected now having Mat in the squad, so let’s see if he’s fit.”

As for the criticism Runarsson has faced, particularly after a poor performance in the 4-1 defeat to Man City in the Carabao Cup, the manager was sanguine about what is expected in terms of performance levels at a club like Arsenal.

“This is what you face when you play for a big club,” said Arteta. “People expect you to go out and give your best, perform at the top level, and if you don’t you know you’re going to get that criticism.

“You know that before you join the club, that you are exposed all the time. To critics, and you know when you play really well everyone will be praising you more than at any other club.

“You have to be able to handle that pressure if you want to play here.

“Yes he had a difficult game against Man City but the other night he came on and I think he did well.

“He works really hard, he’s a really nice boy, really humble, and he needs to be away from all the comments to focus on his work and focus on improving so when he’s given the chance he can perform in the best possible way.”

Ryan returns to training ahead of Villa clash

Good luck to whoever is in goal, especially with all the Martinez comments likely if he keeps a lot better than them!

Villa feel like they are starting to lose momentum a little, as you would expect with an over-achieving small squad.

We need to not do what we do with most clubs who are struggling and give them a helping hand. If there was a trophy for the club who most removed their opposition from their poor form, it would surely go to us.

Let’s hope Partey totally dominates Grealish and then a win will be more than likely. Tough game though. We need to protect whoever is in goal because they are going to be slightly vulnerable.

I think that is what will determine this match: can Grealish get through our midfield with the ball, or have good passing lanes through it. If he cannot, we will win; if he can, it will be much more difficult. (Grealish is that rarest of creatures: an English player who is as good, maybe better, than his hype. I think our young number 7 may turn out to be another.)

Don’t you understand that if only we’d kept Martinez we would be smashing it at everything now? The PL, EL and the FA Cup would have been handed to us already because we’d be so superior and awesome everyone else would have just conceded. If only we’d not sold Martinez!

I can only imagine the ‘Martinez would definitely have saved those’ comments if Leno had let in the goals Martinez has let in the last few Villa games !

I’m disappointed that you’ve left an unnecessary space before the explanation mark, given your name.

He’s not going to like “explanation mark” one bit…

It’s “exclamation” FFS!
First rule of pedantry; Do not fuck up yourself when pointing out someone else’s fuckup, you will be called on it.

It was intended as a joke…

Unnecessary but I like it. My therapist for my pedantry is encouraging me to make little mastikes.

The rapist, eg leaving gaps sounds like it is working well.

Someone should make a YouTube compilation of every goal Martinez ever let in and call it “Leno Would Definitely Have Saved Those”.

It is one of the most ridiculous of all the controversies football fans conjure, because it is pretty obviously so unimportant. I don’t know (how could anyone?) whether Martinez is `better’ than Leno, or the other way around. But I am 100 percent sure that whichever it is, it is not by a lot.

If we assume we couldn’t have bought Gabriel without selling Martinez then I’m cool with that. Regardless of what happens at the weekend, it would have been mental to keep a valuable second choice goalkeeper and not been able to sign a CB as a result.

Martinez wanted to be first choice or go. We kept Leno, who is a great keeper, and allowed Martinez to be number one elsewhere. It’s what he wanted but some people make it out as if we let Buffon MK2 go for nothing out of some act of gross unfairness. And now every time someone tenuously related to goalkeeping at arsenal breaks wind it’s because Martinez who is gods gift to goalkeeping is punishing us.

A Different George
Reply to  SalvadorMari

He didn’t want to stay as a second-choice goalkeeper. That was the reason one of them had to be sold. Once you accept that fact, everything else is a detail.

I understand the sarcasm in the post, others seemingly don’t.

I don’t know why we haven’t appealed Leno’s red card. The ball was nowhere near the goal, so how could it have prevented a goal scoring opportunity.

Arsenal defender David Luiz was shown a straight red card for a foul on Willian Jose against Wolves on Tuesday, but manager Mikel Arteta says he is “very hopeful” the decision will be overturned after the club lodged an appeal.
-BBC

Yeah Luiz isn’t a big deal as Gabriel can play against Villa. Leno is the one I’m worried about.

Well, because if he hadn’t handled the ball, the Wolves oncoming attacker would have had no one between him and the goal. No different than if Leno had intentionally tripped him. And, although theoretcially not relevant, that attacker was Traore, so it’s not likely anyone would have caught him.

I thought he has a 3 match suspension

I think Runar is just nervous. Look at the 2 games he came into. Shitty in a cup tie and 2-1 down with 9 men
I think this is his first propper game so i will juge him on this one, not the others or by his looks

Three game suspensions are only for malicious play. This one is a match ban.

Runnarson limited keeper in my eyes. His positioning is poor and has no command in the box. There’s no way he’ll make it at this level unless something drastically changes.

Just our luck that the backup goalkeeper would be injured when we needed him.

I agree that Runnarson is not suitable, but it may be all we have for Saturday.
we were never going to be much higher in the League just because Martinez would have been on the bench, or our first team keeper.
Martinez spent 9 years at Arsenal and several loan spells to get to a good level. He wanted first team football. he’s doing well at Villa, but yesterday he let two easy goals pass that cost his team.

Is it me or are we the worst team for buying or loaning players that come injured and Cant play straight away????

Apart from the decision to get Ryan (we needed an addition and are unlucky he is now unfit) I feel that the incoming loan approach of recent years is disheartening. Like trying to patch up a problem glaring in your face.
Denis Suarez, Dani Ceballos

how fit does a goalie really need to be??

Very fit and not scared to get hurt, and able to make himself look bigger, by not protecting his face but spreading the arms when rushing forward

Am I missing something here? Runarsson is 7th choice keeper – behind several youngsters – when EL squad decided but 3rd for PL?

His confidence, already low, must have been pretty shot by the time he passed the ball out for a corner with no pressure. Villa will destroy him at that rate.

Because we can put as many qualifying players on our B list g for the EL squad. So we don’t put him in, and put all the keepers we have. If we put R in the EL we need to remove one player. We got Kola and mustafi out, Ryan and odegaard in