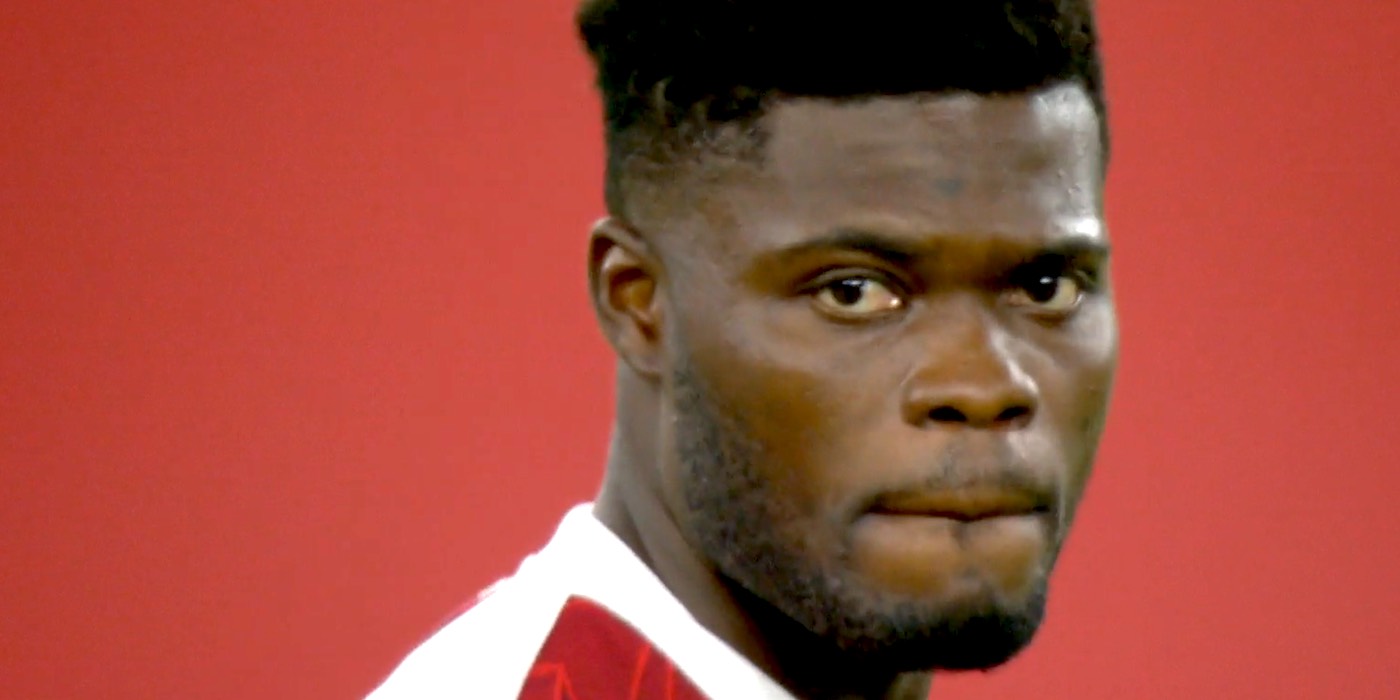 Mikel Arteta says Thomas Partey has been left devastated by the hamstring injury picked up against Aston Villa.

Having missed a couple of months with a thigh injury – a problem he thought he’d recovered from inside two weeks only to relapse – the Ghanaian made his long-awaited comeback in mid-January against Crystal Palace.

The 27-year-old went on to make five consecutive starts alongside Granit Xhaka in the centre of midfield before breaking down in the closing stages of Saturday’s defeat at Villa Park.

At this point, it’s unclear how long he’ll be sidelined for but he’s definitely been ruled out of Sunday’s game with Leeds and is a big doubt for the Europa League clash against Benfica in Rome.

“It’s a difficult one,” said Arteta on Friday morning. “He felt something during the game but we didn’t think it was too bad.

“After the scan, it looked a little bit worse. He won’t be available to play against Leeds and we’ll see how it evolves in the next few days but it’s a muscular situation.

“He was devastated. We were all devastated because we know the importance of Thomas.

“We haven’t had him in three games consecutively. He’s only played 90 [minutes] once since he came back from the injury. It’s a big blow for us. He’s adapting to the league and I think he’s been very unlucky as well.

“He’s very frustrated because he’s a really competitive guy who wants to feel important and be important for the team. At the moment, the injuries are restricting a lot of game time for him.”

Arteta: Exit would have been harsh

Hopefully this will be an important early lesson for Arteta as regards the protection of key players.

It’s not necessarily the case that this has been a result of Thomas playing the Sp*rs game but you can’t help but feel that did him no good whatsoever.

With so much football still to play, it was a poor move with hindsight. But we brought in a manger with no experience and this is just the kind of mistake we have to accept as a result.

Managers with decades of experience will play their top players held together by duct tape if needed when the team is desperate to win a match. That is sport; these things happen. Not sure blame needs to be allotted in this case.

I’m not saying any blame is necessary. But it’s hard to look back at that and not find that decision a little shortsighted.

A more experienced manager would have likely found a way to play without their key man and used him as an impact sub. If things were going badly he could have easily been introduced at half time.

Yes, football fans are kings of hindsight. But that doesn’t mean that there isn’t a right and a wrong way to deal with things.

Without another player who can do what Partey does at his disposal, I don’t see any manager leaving him out when he has an immaculate injury record, is desperate to play, and the team is desperate for the big win. Just don’t see it because the point is, you have to be shortsighted when you need a win — if you are cruising along playing top-class football and have your eyes on the 38th game of the season as much as you do the 15th, then sure, you can manage that situation differently; but if you are in the trenches… Read more »

I think this just shows you how leisurely and slow paced Spanish football is compared to the EPL.

Right now it seems the more we shell out on players, the less we are able to rely on them. A real shame considering his obvious talent.

Big player for us hence a big miss.

Hope he can come back sooner than later.

At the moment I’m beginning to question the motives behind Partey signing for Arsenal. As it stands he’s traded a Chamions League and La Liga challenger for a mid table Premier league team. I’m not doubting his quality, but let’s face it, this was all about money. He’s 27, peak of his career and this is the last big money earner for him. This is a problem that has plagued Arsenal for years and we’ve just given Aubameyang a 300k contract just as his effectiveness looks like it’s on the wane and gave Willian a 3 year deal. We have… Read more »

As far as hot takes go this is awful. The guy gets unlucky with a couple of injuries and you’re writing him off as a dud? He came in and played without any preseason under his belt for us and has played well in pretty much every game he’s played for us and we’ve looked far better as a team with him in the side. He came to us because he felt wanted by us – the lengths we went to in courting him and convincing him to join us are well-documented. He has said himself he felt he wasn’t… Read more »

What the hell are you talking about? None of my comment relates to your response. At no point did I say he was a dud, quite the opposite. He is an excellent player, but he went from about 80000 per week, to about 280000k per week. That despite Atletico offering to double his wages. And I mentioned nothing about his injuries and you’re now blaming the physios? Again I’m not sure what games you’re watching either as he is playing central midfield in a team that doesnt score many goals. Just like Atletico Madrid. Difference being, it’s an easier league… Read more »

Not while Arteta & Edu on board

Gutted for the Thomas and for the team. I think now, it’s hard not to write off this season and start planning for 21/22 season. Not much left to play for beyond deep Europa run.

Partey’s season has been a real shame but he’ll get past these nagging one month/two month injuries. His skill needs no adaptation to Premier League football but apparently his body does.

Still committed to the Arteta project.

Let’s hope for a summer window as strategically well managed as this winter one. And on to next season.

Starting him 4 times in 12 days coming back off injury, wasn’t the smartest move.

Having to manage a 27yr old in this way, is a bit worrying

Big opportunity for Ceballos now, he’s a player I like

And the Partey has only just begun….