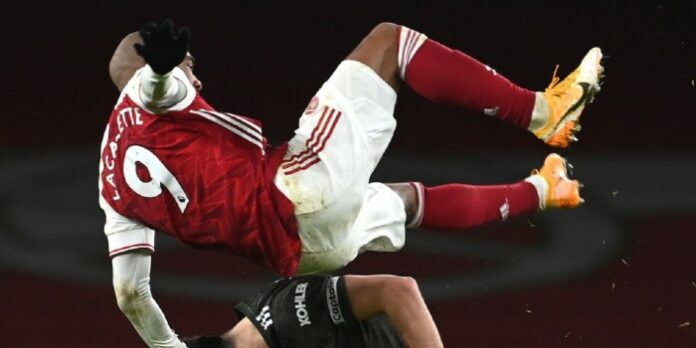 Mikel Arteta expects Alex Lacazette to be available for tomorrow’s clash with Wolves following the heavy fall he sustained in the closing stages of Saturday’s 0-0 draw with Manchester United.

The Frenchman appeared to land on his head as he challenged Harry Maguire in stoppage time for a high ball and required lengthy treatment before being substituted.

He appears to have escaped a concussion but the boss says the club continues to follow the necessary protocols to ensure that’s the case.

Facing the media on Monday morning, the boss said: “We have to follow the protocols, that we have to test him and make an x-ray.

“He was completely fine after the game, he was fine yesterday and he has slept well. I’m expecting him to be available.”

It remains to be seen whether Bukayo Saka (hip), Kieran Tierney (calf) will be available for the trip to Molineux.

“We don’t know yet [if they’ll return],” said Arteta when asked about the pair.

“Today we’ve got a training session and they haven’t been able to train with us yet, so I think it will be really difficult for them. But I don’t know, we’re going to try to last-minute see how they are feeling.”

The boss was slightly more optimistic about Pierre-Emerick Aubameyang’s chances of being involved. Our captain is currently in quarantine after returning from abroad following a family matter.

“There’s still some things to clear up,” revealed Arteta. “Maybe yes, maybe no. We don’t know. We’re still doing some paperwork at the moment.”

It sounds like any other absentees will be decided by what Arsenal do in the transfer market before the 11pm deadline. There are suggestions the likes of Reiss Nelson, Ainsley Maitland-Niles and Joe Willock could all head out on loan.

Kierney and Saka both unlikely, a shame but better for them to be fit and well. We need them as much as we can through the season, so no point getting them back early and injuring them again.

The Tierney injury is entering the “worryingly dragging on” category now. Starting to make me nervous. Too many times in the past we’ve had a guy out for a few games, to a few weeks, to months…
Heal up there Tierney. We need you buddy!!!

He was out training last week after being ruled out initially. I think it’s all fake and PL is fixed. It’s all a puppet play by the elite to control our minds and manipulate our emotions. One big social experment believe me, and Arsenal fans are chosen to be tested for hope, disappointment, shock, anger, resentment, and sadness repeatedly.
As soon as a player starts to perform for Arsenal they take him away. Party, Tierney and now Saka, this is sh!t is scripted.

Not the response I was expecting. But you’re probably right… Now we just have to get to the bottom of why the script writers are dirty Sp*d lovers? Bastards!

Yesterday’s plot-twist in the Spuds Show was welcome, but I’m not looking forward to the usual “Kane comes back and they go on a 10-match winning streak” arc.

Your response has been noted.

The Re-education team will be with you as soon as they have gathered their instruments.

You know when the player starts training with the team and they realize he needs a surgery.

EPL results are inconsequential really. We are not going to get relegated nor are we finishing top 4. Absolutely need to win that Europa thing.

I think Willian will be starting against Wolves.

I absolutely hope not…

In the second half of February we play Leeds, Benfica twice, City and Leicester in the space of 2 weeks, so I’m more than fine with taking zero risk and resting Saka and KT tomorrow, and maybe even for Villa if needed. Pepe is in good form and Cedric is actually doing a fine job.

A back-up left-back on loan would still be good though, because Bellerin is soon going to need a rest too.

I thought Saka’s absence Saturday was just a precaution? The official Arsenal twitter literally said that. Then again I’m pretty sure they said Pablo Mari was a precaution and he hasn’t featured in about 5 games now

Trouble is, with the games coming thick and fast all bloody season, even a minor knock has a big impact on number of games missed.

Let’s start Odegaard tomorrow and give ESR a rest, even for the first 60 mins. Good test for the new guy

The schedule is so crazy at the moment, but I’m optimistic as our squad players have finally started to look capable of filling in.

As boring as a mid week without Arsenal is, it’ll be very good for the troops to get a mid-week off next week whilst nearly all the teams above and around us play in the FA cup. Typical though that the teams we play either side (Leeds and Villa) are the only other decent PL teams knocked out too!

Paperwork… not our strong point

Is Pablo Mari still alive? I would like Gabriel to start against Wolves.

I know the schedule is a bit mental – but what good is having star players if you can’t rely on them to be fit? Entering Ramsey territory with a couple of these players. Wolves is still worth 3 points like every other game a weakened team gives them more chance to beat us.

We need to be taking 3 points. Highly dissapointing we did not take all points against United. The table is as it is. I mentioned when many pundits and fans a like started gloating about being back in in 8th not recently that our real position was 10th. We have far too many teams around us with a game or 3 in hand particularly Everton and Villa just ahead of us. We are no where close to getting into europa spot yet let alone CL. Will need to string 4 or 5 wins to say we are in driver’s seat.… Read more »