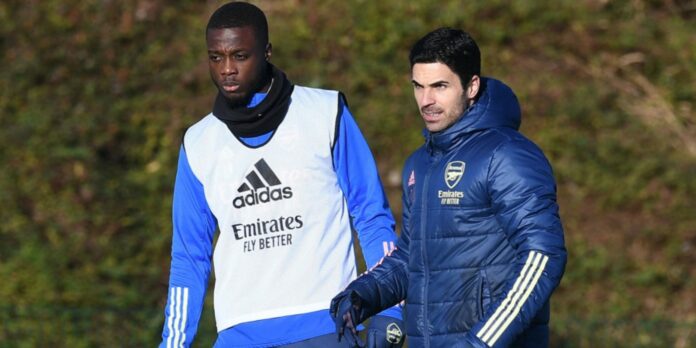 Mikel Arteta has urged Nicolas Pepe to ‘keep the basics right’ after the Ivorian, in his view, produced his best performance so far at Wolves.

Playing off the left flank, the 25-year-old was a constant menace before and after he broke the deadlock on a night when he was eventually sacrificed as a result of a change in shape implemented after David Luiz’s red card.

While the Gunners lost the match 2-1, Arteta was pleased with all aspects of Pepe’s game which he neatly showcased in the action that led to his goal.

Not only did the £72 million signing steal the ball for Arsenal deep in the opponent’s half, he then showed strength and quick feet to beat two men before unleashing an unstoppable curling effort past Rui Patricio.

“If you ask me personally what I think about his overall performance [at Wolves] in all the phases of the game, I think it’s the best he’s played,” said Arteta.

“His contribution to those aspects was the best that he’s done and he needs to sustain that. When you have a moment in football when you’ve had to earn the right to play, you cannot lose it. You have to keep the basics right and keep doing what you’re doing. If not you know that someone else is going to be knocking at your door.”

The boss went on to admit that for all Pepe’s quality on the ball, he remains someone who needs clear instructions before being sent onto the pitch.

Arsenal face Aston Villa this morning and Arteta faces a big decision. Who will he sacrifice to reintegrate Pierre-Emerick Aubameyang? The captain is available to start but his inclusion could come at the expense of Bukayo Saka, Alex Lacazette or Pepe, who has two goals in his last three games. A tough one.

But that still wasn’t enough for him to be subbed off , which was strange as he is the only player in the squad that can commit opposition players with his pace&dribbling (saka aside), imagine a manager saying it’s the best he’s seen you play but you still get subbed off even after being the goal scorer .. I’d lose confidence in myself also

Honestly, I’d start Auba on the bench. There is a growing chemistry along that front line that I would hate for us to disrupt. He will eventually come back into the side based on his quality, but I’d let him wait a little.

Let Auba earn back his position!

A good problem to have if you ask me 😉

Would stick to the ESR-Pepe-Lacazette trio.
They played absolutely amazing in the first half against Wolves.
Auba will get his minutes for sure I’m sure, but right now we can’t afford not to use our sharpest swords…

Why does £72m pop up every time we talk about Pepe? It has become like a yoke around poor lad’s neck.
There are more expensive players out there who are yet to justify their transfer fees, yet I don’t see that pop up anytime they are written about.
Coutinho to Barcelona; Harry Maguire to United is another; Kepa Arrizabalaga of Chelsea; and many more, are prime examples.

Speaking of Pepe himself, I think we are beginning to see the benefit of the manager’s confidence in him, and playing from the left.
But what happens to Auba?