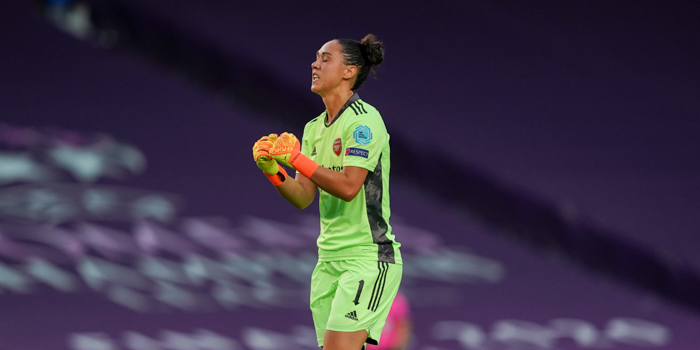 Arsenal goalkeeper Manu Zinsberger has signed a new long-term contract with the club. The Austrian’s original deal was due to expire at the end of the season but she has extended her deal. Zinsberger signed from Bayern Munich in the summer of 2019 and has become an integral part of Joe Montemurro’s side ever since.

Montemurro has a rotation policy with his goalkeepers with Australian number 1 Lydia Williams also signed last summer from Melbourne City. 25-year old Zinsberger has made 31 appearances for the Gunners across two seasons. She told Arsenal.com, “It’s just unbelievable. I’m happy. We have so much quality in the team and I think also the staff around us makes it unbelievable. I’m just happy to extend my contract.”

💭 “I’m so excited to have finally signed a new contract with Arsenal. Thanks to everyone out there for your support.” @Manu_Zinsberger ❤️ pic.twitter.com/dpnRKFQ6SJ

“It’s great to have Manu” said Head Coach Joe Montemurro. “We brought her in as a young goalkeeper with a lot of international experience, and obviously she’d played at the top level with Bayern. To be able to work with her and keep her development going, and be part of what we’re trying to build, is really exciting. She’s a special girl for the group, too.”

“She’s a modern goalkeeper who’s very, very good with her feet. She suits her style from a football perspective but it’s the way she is, her attitude, her behaviour, just her great nature. It’s really important to the group and we love having her around.”

Arseblog News will be chatting with Manu about her contract on Friday afternoon and those quotes will appear on the site shortly after (subject to any embargos!)

Why? Just why? They don’t have the funds to sign Viv/Leah/Katie to a new deal but we’re resigning one of our worst performers? Nothing against her personally but I wonder if we’re actually handing out new contracts based on performances.

Who says they don’t have the funds? There are two sides to contract negotiations and it could be that the players you mention do not want to extend their contract. I’m not saying this is the case but it is a possibility. The other alternative is that there is more time left on their contracts than there was with Manu’s so it is not such a pressing issue to get them signed up. I do agree that while I believe Manu is intrinsically a good player she is not having her best season. Could be that she feels under pressure… Read more »

But she just isn’t good enough for the level we need. She is the worst goalie in every possible statistics in the league. I know womens game is not as ruthless as mens but still. We have to move on from players who are just not good enough if our aim is to compete with Chelsea etc. Same was with Viki last season. They are perfectly good players, but not good enough for our ambitions. And Viv has been talking about club being ambitious for a year now. We will loose our best ones, it we keep persisting with ones… Read more »

So who would you bring in then? It’s no good signing an Ellie Roebuck etc. because Joe will not play them the same way that he doesn’t select Fran and we are unlikely to pick up a Carly Telford or Mary Earps. We should have made more of an effort to keep Sari but it may have been that she wasn’t happy in England I don’t know. I don’t think Manu is as bad as this season’s stats suggest as I have seen her have good games but as we are all agreed so far this season has been one… Read more »

Hampton, MacIver, anybody…. I would argue that Manu is never been good for us. She was better last season, but her mistake cost us the Chelsea away game last year also. There have been many games there we have played well but opposition keeper saved the other team, with Manu, we have none. We would have won ContiC last year if Berger wasn’t that good. We would have been at least 2nd last season is Roebuck hadn’t saved ManC away last year. My rant under this post is awaiting moderation, but we just can’t overcome situation where we have conceded… Read more »

Let’s face it she wasn’t the only reason we dropped points in the last game vs Reading, was she?
I think confidence throughout the team is at a low ebb and some players are affected more by that than others.

Ofcourse she wasn’t only reason, but she was part of the problem. We were behind from goalie error from the beginning before our young and inexperienced backline could get to any rythm. Confidence and leading from the back are so important for a goalie. Specially if you have 2 youngsters and winger playing as CB’s infront of you. She should have been the leader in that case. But she isn’t, she never has been and that’s why we should have parted ways this summer.

Arsenal have the funds to extend those contracts, the issue is more whether they have the funds to make the sort of signings to convince those players to stay. The club’s budget is uncertain at the moment because they don’t know what season ticket money is going to look like this summer and whether the men and women will be in Europe. It’s difficult for them to firmly say, “yes we are going to break the bank this summer and up the budget.” They won’t cut it, it’s just a case of how much they can increase it.

Thanks for the reply Tim. Yes, sorry, should’ve clarified that they can afford to give out new contracts in my original comment, I think it’s more about whether this is the sort of extension that would inspire confidence in Leah/Viv/Katie that the club is using their resources wisely. I have my doubts about that – Manu is statistically one of the worst shot stoppers in the league and looks nervy when she’s on the ball. Who is approving these extensions because the analysts must have access to these stats? I know Joe likes her because she’s a “modern” goalkeeper, but… Read more »

Nice to see. I hope this helps her get her confidence back.

So do I!
Manu is great but she has made some schoolgirl errors this term!

BTW, Tim, is this for another 2 years?

I don’t get it. Goalkeeper is for us absolutely easiest position to updgrade. We could argue that in every other position we have players in required level and it is more question about tactics and how we are using our players, but goalkeeper is pure quality issue. This season alone Manu is at fault or partly at fault for concedeing 6 goal in the league (reading x2, Westham, Spurs, chelsea, Bristol) and we have conceded 9 all together in the league. It is not sustainable. It is too much to give away for “being very good with her feet and… Read more »

I agree that our goalkeepers haven’t been the best this season but I don’t think that’s been the main reason for the disappointing results. Too often we’ve not been able to play with our best combination of CBs, and our midfield is regularly outfought. Looking back to our league-winning season, I now believe that the loss of Dominique Janssen was more damaging than I realised at the time. Top-class football is an international game and we have to accept that players will move on for all sorts of reasons. I can’t help but feel that our replacements have not been… Read more »