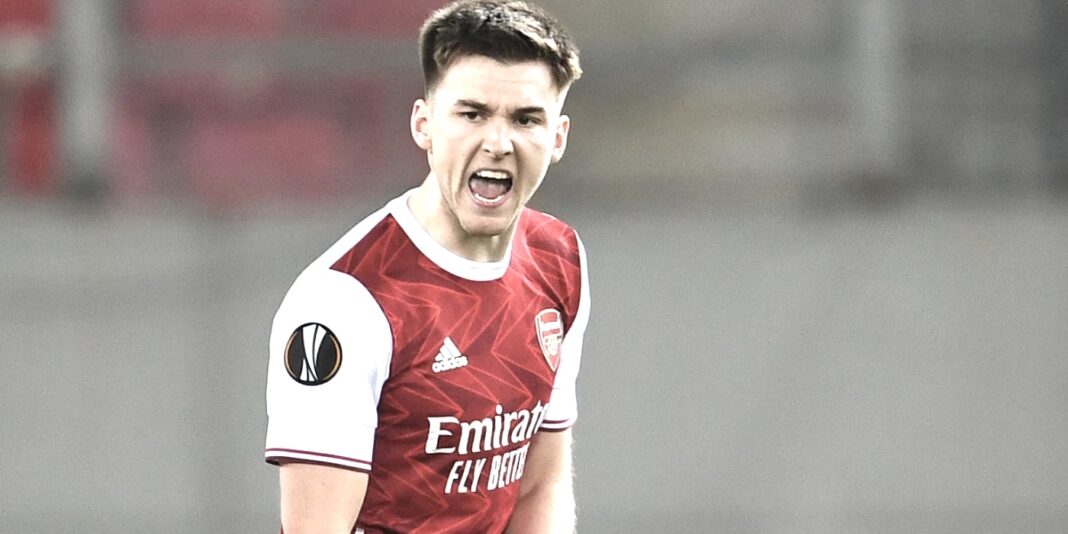 Kieran Tierney says that Arsenal can take a lot from the way they qualified for the Europa League Round of 16, scoring twice in the last half an hour to overturn a 2-1 deficit on the night and go through with a 3-2 win.

The Scottish international smashed home the equaliser before Pierre-Emerick Aubameyang popped up with a rare thing from an Arsenal perspective – a late winner.

The Gunners don’t score enough goals in the closing stages of games, so to do so in a high pressure situation is very pleasing.

It’s something Tierney touched on afterwards, saying, “We bounced back the best way we possibly could and I think it is a good step for us to show we can face adversity, come back and go through.

“We never seem to do it the easy way. But credit to the boys we had some tough moments out there and some setbacks but to bounce back, score and go through to the next round, is all that matters.

“We are taking it game by game. We are not looking too far ahead, we have a big game on Sunday as well.

“The games are coming fast right now so we can only look at one game at at time.”

The former Celtic man drew praise from his manager too, who was happy to talk up the importance of the 67th minute goal which drew his side level.

“You mention the right word,” said the Spaniard, “because that is the way I would describe him, which is all determination and passion for what he does.

“The way he has come back from his injury and how willing he is to try to help the team, it gives us a big lift.”

Also, if you want to love Kieran Tierney a bit more – click here.

Listen to the brand new Arsecast on last night’s game

We need a quality young LB that can step in and play just to preserve Tierney. This guy is fucking phenomenal! As I’ve stated elsewhere, without Saka and Tierney we are out of the Europa League against a team without clearly inferior quality. While not every cross finds it’s mark, almost every cross he makes is into the danger area. And those those touches and first steps past defenders followed by his killer crosses are almost without rival in English football. Add to that the ability he has shown to cut inside and it makes him almost unplayable. We are… Read more »

Yeah we need to be proactive about resting Tierney next season, rather than being forced into resting him for an extended period when he inevitably pulls something. We should aim for him to start about 2/3rds of the time (in our most important 2/3rd of fixtures)

I don’t mind bringing in a short term option to play the remaining 3rd as long as they’re still hungry. It’s not likely they’ll be 1st choice anytime soon so a quality young talent would probably end up stifled

When we bought him and he was injured there was one voice in a sea of lamentations who said we should be very excited to have a player like Tierney in our team. I’ll always remember that because whoever said it was absolutely right. Tierney is a big player for our club.

I don’t think that’s quite what happened. Many Gooners were and remain very excited about Tierney. He is a talent – I don’t think there’s any question about that. That shouldn’t disguise the fact (and it is an undeniable fact) that on the evidence so far, not just the last couple of games, he is injury-prone. The club therefore needs handle him carefully to get the best (and most, in game time) out of him. These two facets aren’t mutually exclusive.

I don’t remember hearing a negative peep when we signed him. Scottish gooners were unanimous in their praise. Everyone was pretty positive about the signing and what an under the radar steal it was considering it’s from a big Scottish club and we negotiated pretty openly. We knew early on we had a special player

There was plenty of negative comments. I remember arguing repeatedly with someone who didn’t see him as an upgrade on Kola! Some people are just weird….

Yeah some peoplen who never watched him said he’s decent but he’s only showed it in the Scottish League. People who watched Tierney knew he had the ability

The ‘one voice in a sea of lamentation’ was me.

Well clearly you weren’t one voice. Plenty of us knew & repeatedly told people how brilliant Tierney was when we signed him…..

Look at you all getting your nobs out 🤣. Honestly! You’re all great you all know everything. There you go, you can put them away now

😂 Not boasting at all. I just don’t like lying…

Well clearly you lot adjust the facts to suit your own agenda.

Don’t forget to downvote this post now. You know you love it.

Not at all…. when I saw the first post I knew it was incorrect as there clearly wasn’t only one voice… but I thought ‘I bet there is some clown who will pretend he was the only one’…should have known you would be all over it..

First, it was good to see that Tierney came through another game with no mishap (and that he scored, of course).We certainly didn’t do it the easy way against Benfica, but in reality it never was going to be that easy as they are a tough team. If we’re honest though, the unfortunate truth over the season – so far anyway – is that it’s more a question of the side not doing it at all, rather than not doing it the easy way. That said, we can build on the Benfica win not only in the EL (particularly true… Read more »

He looked knackered by the end, and Saka looks like he is nursing real muscle soreness, and yet both were by far and away our best players. Probably need to rest them both against the Foxes, but Bellerin also needs a rest, so I’m not sure where we get our fullbacks from.

Chambers is not a bad option on either side IMO. He and Cedric could do, I’m not sure if against Leicester tho..

He’s the captain for me – even if it doesn’t make any difference, just seems right! 😂

He’s the only true natural leader we’ve got.

Arteta needs to grow a spine (heh) and do the decent thing. Maybe taking the pressure of the captaincy might improve Auba’s game as well. Two birds with one stone.

Won’t happen, of course. It’s too much like common sense.

*taking off the pressure of the captaincy

We are playing Olympiakos

Spanish Gooner
Reply to  Murphy was an Arsenal Fan

Everybody’s predictions came true! We’re playing Olympiakos, and Spurs have another easy draw in Dinamo Zagreb. United vs Milan is good for us, and hopefully the winner gets the shit from down the road

Not sure I could love KT more without the wife wanting a divorce. The guy is awesome, perfect attitude, and as much as I love Auba, KT should be wearing that armband next season

Welcome to Arsenal KT. Easy is not in our DNA.

I have to say our recruitment has been terrible in the last decade, but getting KT was amazing. If he stays injury free he will be the best left back in the world very soon!

I think last decade is a bit harsh. We have had some good and bad transfers over that time. Last 2 years would be a bit more realistic. Tierney, Leno, Martinelli and Partey look to be the best transfers we made in that time including Torreira, Sokratis, Mari, Cedric, Runarrson, Willian, Denis Suarez etc

I’d argue it’s even longer, like 14 years. Not necessarily every player being a bad player, but just a complete absence of strategy.
.. and lots of shite players.

I was going to say there’s nothing clever about swearing and then I listened to it. KT even swears with more commitment than his peers. Love him!

He definitely does it the easy way

We have a good group of world class players now in Tierney, Saka, Auba, Partey and Leno.

Need to add a couple of quality midfielders/wingers and we should be good enough to challenge for top 4..

There’s still an awful lot of dross to get rid of, too.

The usual suspects – Willian, Luiz, Ceballos, Elneny, Xhaka and that kid who thinks he’s a goalkeeper.

They’re the ones holding us back in mid table. We’ve got to get rid of them.

Leno is not world class

So who would you replace him with….?

He’s saved our bacon more times than I could care to remember.

Another lad who will be off to a club challenging properly before we know it – if we don’t wise up and get rid of the crap that are keeping us in mid table and requiring monumental cup comebacks.

Loved his “wake up for fuck’s sake” celebration last night – reminded me of Adams.

Thank God we’ve got him. Now we need to make sure we don’t piss him off and lose him.

He should be the captain.

Is this the DNA now? Hope we don’t have to keep scraping through by skin of teeth. We need to be far sharper and less cautious. yesterday, we kept seeing us playing around our 6 yard unnecessarily plus balls knocked forward by Xhaka to Odegaard and ESR (to lesser extent) kept being popped right back to defense with zero awareness of space behind them to turn and go at defense. This is one thing Tierney brings, he is extremely positive with play and will engage one on one. But both Bellerin and him need to look up before putting in… Read more »

Also with final application when our players run into the box (which they need to do more often…worse to worse these days its a penalty to us), we need to stay calm and nuanced not rush our shots as much.Composure is a key component for strikers.

need the enigma machine to work that one out.
could be a quote from a unai emery press conference