Wolves 2-1 Arsenal: By the numbers

This match was ruined by refereeing so I have decided that I will go in a different direction for today’s post. I want to go through exactly how much the red cards cost Arsenal in this match and then look at the encouraging first half performance.

Before that the usual graphics.

Wolves 2-1 Arsenal: By the graphs 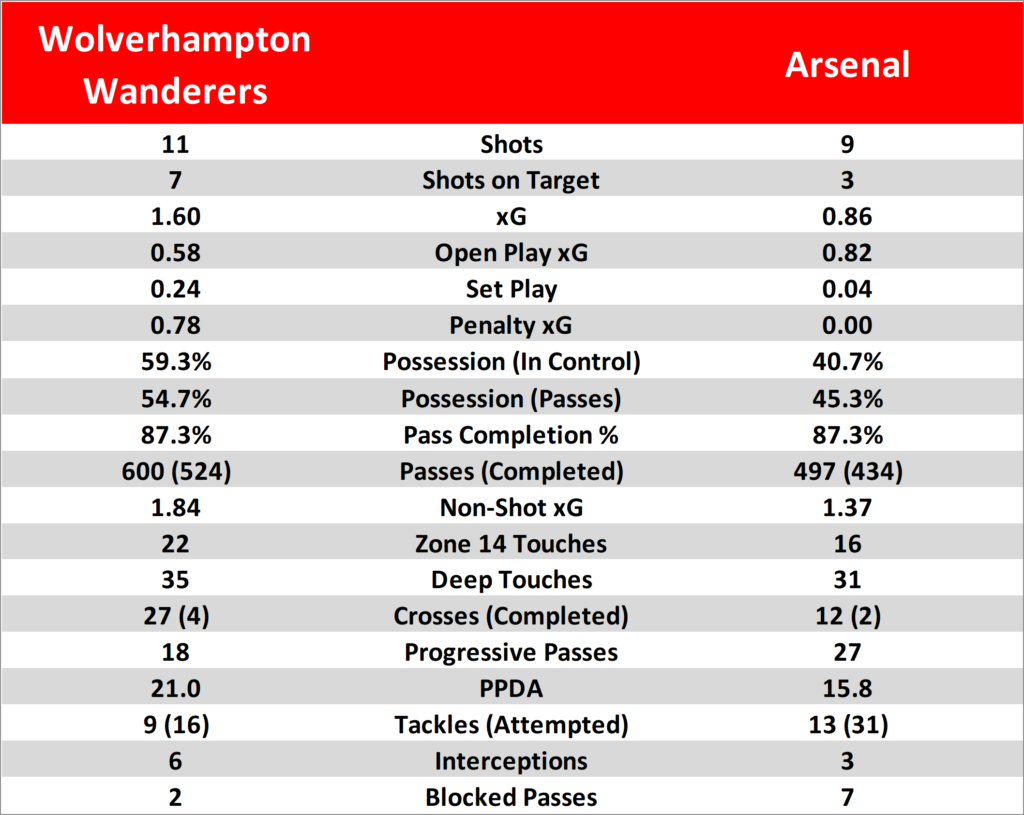 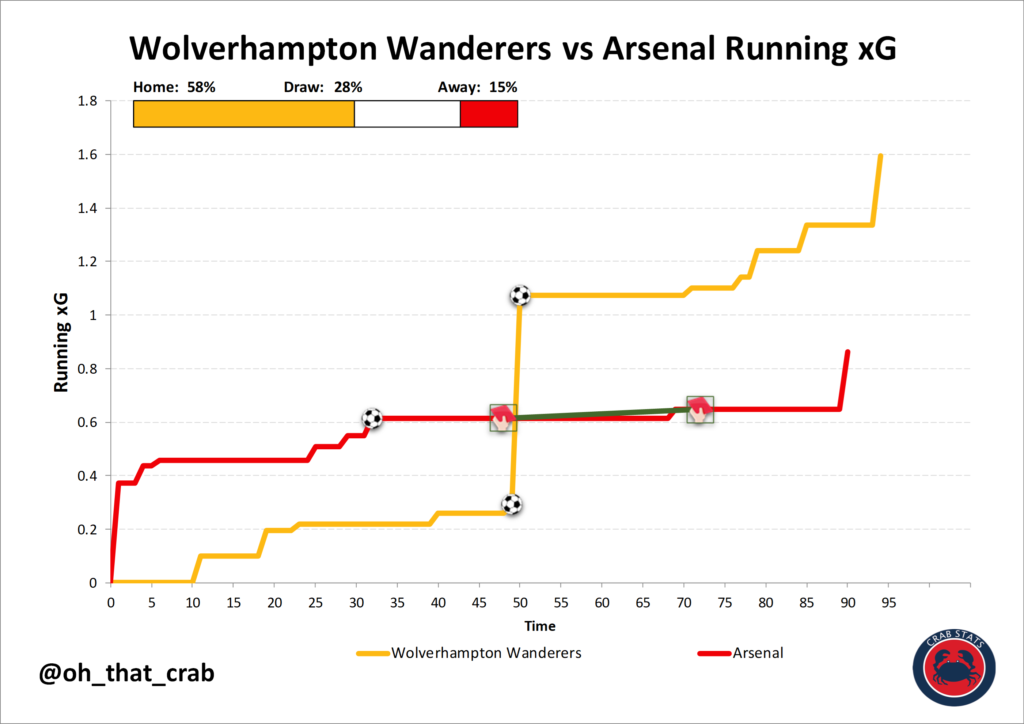 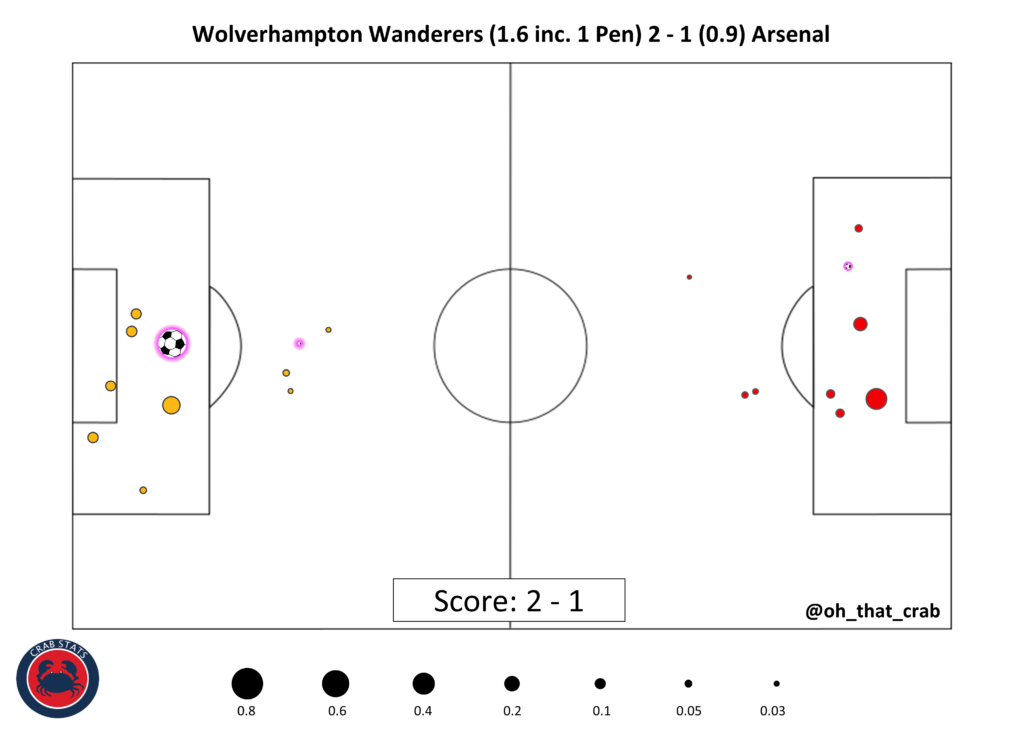 The effect of refereeing on this match

One of the cool things about building an in match running win probability calculators is that you can see how certain things effect the match (I might be very loose with the term cool here). Using this I can give a rough idea of how big a swing each of the decisions was in this match.

At the start of the match, my model had Arsenal favored to win, with a margin of about 0.4 goals. That breaks down to about 46% for Arsenal, 28% for Wolves and 26% for a draw. Given this starting information you can calculate the goal probability decay as time in the match passes by taking the starting goals, multiplying by the percentage of match time remaining, and then raising that to 0.84 power.

There has been also been research into the scoring effects of red cards, in general they are worth -0.5 goals for the team that goes down a man and worth an extra 0.9 for the team that will have the advantage. These are also subject to the decay as time in the match passes, so that a red card in the 80th minute is obviously not as bad as one in the 20th minutes because a team just doesn’t have as much time to capitalize on the advantage.

In this match before the red card and penalty decision, Arsenal were winning by 1 goal, that put them in a good spot with a 75% chance of winning from that position, they also had the advantage where their expected goals over the rest of the match sitting at 0.9 compared to 0.6 for Wolves. 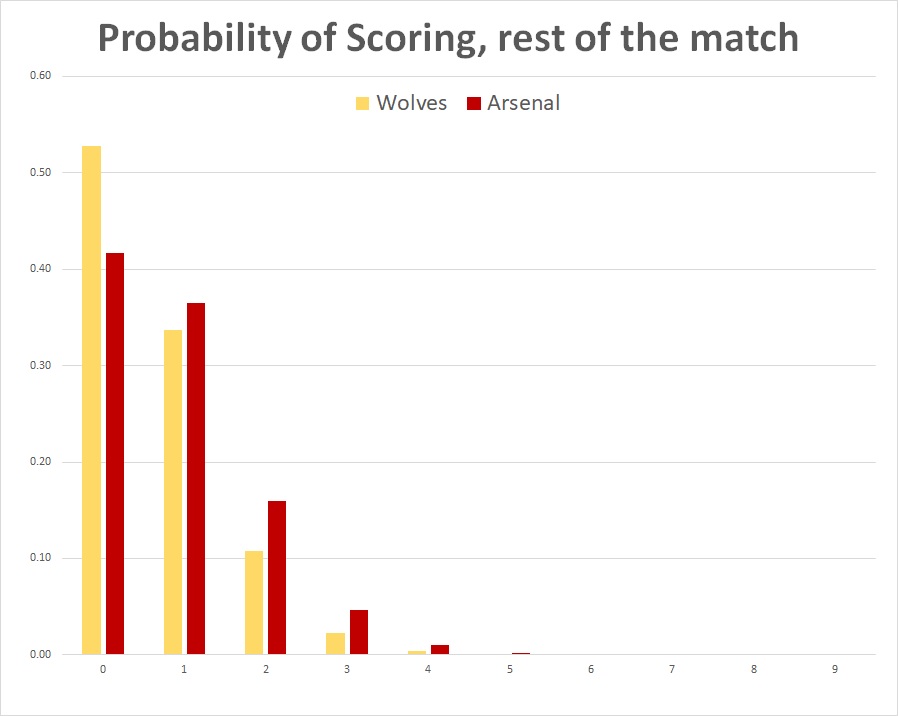 There was a good chance that no goals would be scored but Arsenal held a pretty large edge in the probability of scoring multiple goals.

Now that we have the baseline we can look at how things changed. If no foul and no red card are given to David Luiz, Arsenal continue to be big favorites to win the match, expected to take about 2.4 points from this position.

If this is just a penalty to Wolves, that is worth 0.78 goals for them and that certainly helps them but the win probability at that point is now 39% for Arsenal, 25% for Wolves and 36% for a draw. This would have left Arsenal in much worse position but still looking okay to get something from this match, expecting about 1.5 points from the match. Overall that’s a change 0.9 points for Arsenal.

With the actual outcome of both a penalty and red card that is the same 0.78 goals for the penalty but also an increase of 0.6 expected goals for Wolves and a decrease of 0.3 goals for Arsenal. All told that is a 1.7 expected goals swing towards Wolves. This also has a major effect on the expected points from this point, with Wolves now the team favored with a 51% chance of winning, Arsenal sitting at just 18% and a draw at 31%, with the expected points for Arsenal down to 0.9. The double punishment of the red card and penalty cost Arsenal 1.5 points from the baseline, with the red card costing 0.6 points all by its self.

You can have whatever thought about the penalty (my own thought is that it is likely a penalty around 50-75% of the time) and the red card (in my mind that should never be a red) but this shows the effects on the match that each decision had.

I also take away from this the reason why the supposed removal of the double punishment of penalty and red card was removed, the punishment of those decisions is huge and vastly outweighs the chance that is eliminated (in this case that was probably a 60% xG opportunity). This interpretation of “not playing the ball” has evolved from a deliberate foul to this new standard of trying to avoid contact but still doing so. I hope that this changes like the crazy interpretation where every incidental handball was a penalty for the first couple weeks of the season, unfortunately it will have been too late for Arsenal and this match.

If you’re curious about the second red that dropped Arsenal from 0.2 expected points to 0.05.

10000 – Scorpions that should be inserted up Craig Pawson’s arse.

18 – Touches in the box for Arsenal

6 – Touches within 15 yards of the center of the goal

6 – Passes completed into the box for Arsenal

7 – Carries into the box for Arsenal

3 – Shots on target for Arsenal

2 – Shots that hit the woodwork for Arsenal

1 – Goal disallowed (rightly as much as it hurts to say)

5 – Shots from open play for Arsenal

Overall this was easily the best stretch of Arsenal play for a half that I can remember this season. There could be second half’s where Arsenal produced better stats but my memory says that those came from Arsenal chasing the game against teams that were content to defend. In this half, Arsenal were on the front foot from the opening kickoff and played really well up until the last minute where everyone seemed to have mentally already gone to the lockers for half time.

Not only was the attack good, but Arsenal looked like they were pressing really well. Arsenal’s passes allowed per defensive action in this half was 10.8 (lower numbers indicate more pressing) is one of the highest that they have produced in a half and much better than the over 14 that they are averaging this season. This also led to Arsenal recovering the ball 5 times in Wolves territory.

It really looks like the team is starting to coalesce around an attacking identity and I think that is something that is incredibly positive.

Sources: Opta via whoscored, my own database

Previous articleRunarsson left out of Europa League squad, Odegaard and Martinelli added
Next articleArteta on Ryan, Runarsson and the goalkeeping decision for Aston Villa

Why was our xG so low in the first half? Felt like we created a lot of good chances…

I think part of it is that Arsenal put pretty good finishes on decent+ chances. They weren’t amazing chances and Arsenal did better to get them close.

Is it not also due to the fact that we had one goal ruled out for offside, that also imbues the positive aspect?

Timorous Me
Reply to  Scott Willis

Trying to summon some positive feelings after yesterday…I love that Saka is starting to demonstrate a real thirst for scoring goals. It seems like he used to see himself more as a creator but being on the right looks to have unleashed a new beast. His first half yesterday was just massive. And going back to something from the Arsecast Extra from Sunday, Pepe is looking more and more of a goalscoring threat, especially from the left. The Salah comparisons do feel accurate to some degree (we’re all realists here, of course), at least in terms of the type of… Read more »

parteytime
Reply to  Timorous Me

please keep auba out of the starting 11. Total lack of effort against wolves and doesn’t deserve anything to warrant ripping up a very cohesive attacking arsenal.

Excellent piece, really enjoyed reading about how cards and pens affect the game in numbers.

Yep, a very positive performance. Pressing and attacking as a unit takes lots of practice, and staying in a game with 9 men takes lots of character.

There is an interesting podcast called Whistle Blower, by Tenderfoot TV. That really makes you sit up and look at the relationship between the Premier League, betting, and the officiating body.

Scott, from the running xG chart, it looks like Moutinho’s shot was considered as a high probability chance to score. Is that right, or am I reading this wrongly?

It was a 2-3% chance, it looks like it because it is right next to the penalty that goes up a lot so you don’t even notice the tiny movement from that goal and there.

This is a spilled milk

When you don’t need Mustafi for Mustafi moments.

Arsenal continue doing very well on this end without him.

The purpose of giving a red card for a foul that denies a goal-scoring opportunity is to remedy the loss of that opportunity and to deter defenders who would otherwise gain an advantage by committing those fouls. When the foul is committed in the penalty area, the remedy of awarding a penalty kick is sufficient–but it is not a deterrent in all cases. For example, a spot kick alone wouldn’t deter a keeper from tripping an attacker who has passed him and is about to score into an open goal. So, that’s where we get the language about if the… Read more »