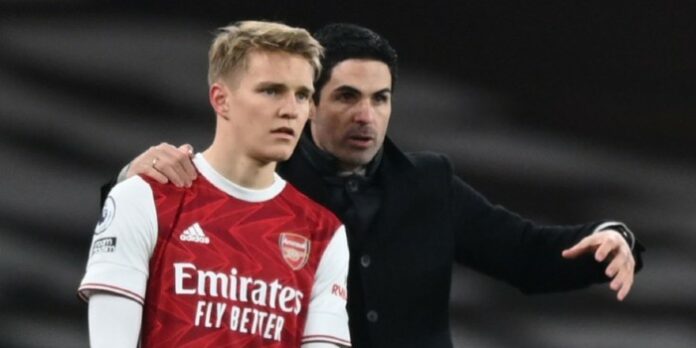 Martin Odegaard says he’s loving life under Mikel Arteta and firmly believes Arsenal have the right man in the dugout to guide them back to the top.

On loan from Real Madrid until the end of the season, the Norway international has already earned the trust of the Spaniard who noted a couple of weeks ago just how impressed he was by the player’s character on and off the pitch.

It appears the feelings are mutual with the 22-year-old speaking in glowing terms about Arteta’s coaching style.

“It’s been amazing, he’s a top coach,” the midfielder told BT Sport ahead of Saturday’s clash with Burnley.

“He’s really intelligent, really smart and there are so many things I can learn from him so I’m just happy to be here and be able to learn and see how he works.”

Odegaard’s decision to make the switch to London was also heavily influenced by Arteta’s playing philosophy.

“It was a lot of things really: first of all the manager and his ideas, the way he wants to play football.

“I think his style of play suits me really well. Also everything about the club, I always liked the club and how they played and I always followed the club.

“When I was younger I watched a lot of games and every time Arsenal played I wanted to watch. So they’ve always been a club I’ve been watching pretty closely and everything felt good to me.”

Odegaard has also been pleasantly surprised by the state of the team given the club’s league position when he joined.

“The club is in a process now where things have changed a little bit, but what I’ve seen and experienced here makes me sure the club will be back at the top very soon.

“I think we have really good players at the club and some top talents.

“They’ve shown it in the Premier League and it’s the biggest league in the world, so I think they’re at the top in terms of talent and quality. When you see the way they’ve been playing, it’s amazing.”

It remains to be seen whether Arsenal can persuade Real Madrid to extend Odegaard’s loan past this season. At the moment, the player, who moved to the Bernabeu at the age of 16, is keeping his cards close to his chest.

“To be honest, I’m just focusing on finishing the season here and doing as good as possible,” he said. “In the future, we’ll see what happens. At the moment, I’m really happy to be here and I’m focused on helping the team end the season well.

He added: “Obviously the Europa League is a big thing for us this year, so we’ll try to do our best there. Then we’ll see where we end up. Of course, the Champions League is a big goal for everyone here.”

You can watch the full interview, here.

Top bloke, fantastic player, really hope we can sign him on a permanent.

I wonder if Arteta sees himself a little in Odegaard. I watched his interview on the club’s website and I was so impressed how thoughtful and articulate he was.

Maybe Arteta feels a kinship towards someone who is clearly quiet but ambitious and intelligent in a sport which is often inhabited by personalities filled with bravado and banter.

Plus they are both CM’s, even if Odegaard will hope his ceiling is perhaps a little higher than Arteta’s.

I’m a big fan of Odegaard, love his vision and technique and unlike a lot of players who have his skills skillset he really puts a shift in too. My only issue with him is that he really only plays in that inside right channel and can sometimes take the space of the right winger, whereas someone like ESR when he’s playing in the 10 role floats across the whole of the front third and links play all across the pitch. I actually think if we were to have an ESR, Saka, Odegaard line up a Saka LW, ESR CAM… Read more »

The possibilities are exciting but I’m trying not to get too excited about the future tactics though in case Real Madrid decide they want to keep him.
With a bit of luck, Madrid may have an interest in Torriera or Guendouzi and would be open for business.

Couldn’t agree more but his ground ball hrough pass for overlapping players reminds me of cesc. Right weight. I think Pepe is catching on to it but Saka will figure it out as well. That if they time their runs right the pass is so good that when meeting the ball you have the CB to engage in a one v one which is ideal for Saka/Pepe.

Good news – a happy and enthusiastic player is always preferable to a disgruntled one as we know from experience. Without wishing to rain on anyone’s parade, I’m sure that I wasn’t the only person to read reports from Spain recently that indicated Real Madrid have no intention of selling him at the end of the loan period. I guess that, like us, they realise that developing their existing young players becomes a more attractive option when things are financially tight (even for one of the “super” clubs). That thinking can change of course, but we’ll probably have to cough… Read more »

I feel your pain. Pissing in the wind on this site tho. The cult of arteta is strong with these minions

oh do fuck off