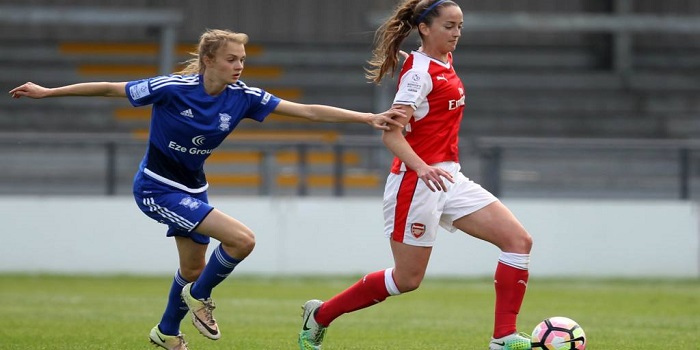 When Arsenal re-signed academy graduate Anna Patten in January they weren’t just re-signing an academy product, they were re-signing a childhood Arsenal fan. The Harpenden born 21-year old rejoined the club in January from the University of South Carolina but her Arsenal story actually goes back to when six-year old Anna was taken to Highbury by her Arsenal supporting uncle in January 2006.

“Me, my mum, dad and brothers all support different teams but my uncle is a big Arsenal fan and he was the one that got me loving Arsenal,” Anna told Arseblog News. “He took me to Highbury as a Christmas present when I was six going on seven and we beat Middlesbrough 7-0. It was such an amazing game and there were lots of goals but to just see and feel all of the love for Arsenal in the stadium and I just thought, ‘I really like this, I like this club a lot.’ From then on all you could catch me wearing was an Arsenal top.”

The game was one of the last Premier League fixtures to take place at Highbury and Patten told me that she feels a real sense of pride that she was able to take in a game at the old stadium. “I never asked my uncle if he took me because he knew the stadium was going to shut but I feel so honoured looking back, I don’t think many 21-year olds can say they saw a game there now.

“It was an experience that got me falling in love with football and Arsenal and I think probably in the back of my uncle’s mind he was thinking, ‘I need to take her before the stadium closes.” Thierry Henry scored a hat trick that day but Anna says she was a little young to take in too many of the small details.

“It was all quite overwhelming if I’m honest, that Christmas I was given that purple home shirt and what I remember the most was thinking, ‘we’re at home so they’ll be wearing that kit’ and I just remember being excited because I had the same shirt on. I can’t say I remember the details of the match because I was so young but I just remember celebrating a lot because we scored a lot!”

Our full interview with Anna also takes in her trial with Arsenal at the age of 12, making her first team debut when she was 17, her decision to move to the US college system and her experiences Stateside and then her return to the club in January. We also chat about Friday’s huge WSL game against Manchester United. The 36 minute interview will be released on the Arsenal Women Arsecast out next week which is released on the main Arsecast feed wherever you get your podcasts.

A big thank you to Anna for her time.

Glad she got to experience the beautiful old place. I’m 26 so have less memories than a lot of Gooners of Highbury, but I’ll always treasure that first game in 2001 (we lost 4-2 to Charlton but I’m a Gooner to this day!) as well as being mascot in 06 (the West Ham loss/Sol Campbell walk-out game), amongst a few others. I’ll always be able to say I led The Arsenal out, with Thierry, at Highbury.

Sometimes a pity how life moves on with clubs abandoning spiritual homes for monsterous and often faceless stadia. In time there will not be many who actually witnessed a game at Highbury regardless of their age in much the same way as most now erroneously regard Arsenal as being a North London team. Arsenal, of course, originate South of the Thames and a true derby game would be against Charlton Athletic and not the Spuds! Still, applying my philosophy it is not surprising as I doubt if there is anyone alive that remembers the Plumstead Common games! 🙂

Haha 😄. That is a contentious statement to make but I see your point nonetheless.

I just want to add that I have passed through both Manor Ground and Plumstead Common before. Not the Invicta Ground though as that’s terraced housing now.

Plumstead Common is still in good shape but the same can’t be said about Manor Ground. The area that used to be Manor Ground now borders a prison and a junkyard.

Yes great memories of Highbury going back to my first game in the 1960’s and the Fairs Cup win in 1970, unbelievable atmosphere for that game. Still things move on and the Grove is far safer and more comfortable. At least we have stayed near our spiritual home unlike some clubs who have moved away. We just need to build some history in the new ground, winning today would be a good start!

That was my point. We moved away from the Woolwich Arsenal in 1913 but those grounds have been forgotten now apart from by me and Salibaba because the fans from those days are no longer with us. Highbury is still in living memory but there will come a time when its significance fades too as the fans that actually went there cease to be around and it will just be part of the historical timeline.

Can anyone tell me if Anouk Denton was transferred or loaned to West Ham?