If Casey Stoney’s Manchester United have a weakness, it is defending set pieces. Manchester City and Reading took valuable points off United this season by exposing their weakness at defending aerial balls into the box from corners and free-kicks- which is a surprise given how good Stoney was at defending them during her career. Just look at the goals they conceded below in 2021.

Arsenal usually vary their corner routines and often like to go short to vary the point of delivery. On Friday evening, all six of the Gunners’ corners were sent into the penalty area and when you look at the goals above, you can see why.

Corner conceded by teams in the WSL

•Bristol City have conceded the most amount of corners
•Manchester United have the worst goals conceded to corners conceded ratio in the league, highlighting their defensive woes from set-pieces.
•Birmingham have conceded 0 from corner pic.twitter.com/q7ypaZy4vW

Arsenal win their first corner in the 5th minute of the game and immediately the Arsenal players converge on the six yard box to crowd Mary Earps. This is not how the Gunners usually set up for corners, where they prefer to go long and have players attacking the six yard area with more of a run-up. They recognize United’s weakness for defending aerial balls into the six yard box. (Assigning Katie Zelem to mark Lotte Wubben-Moy is a decision United will come to regret). 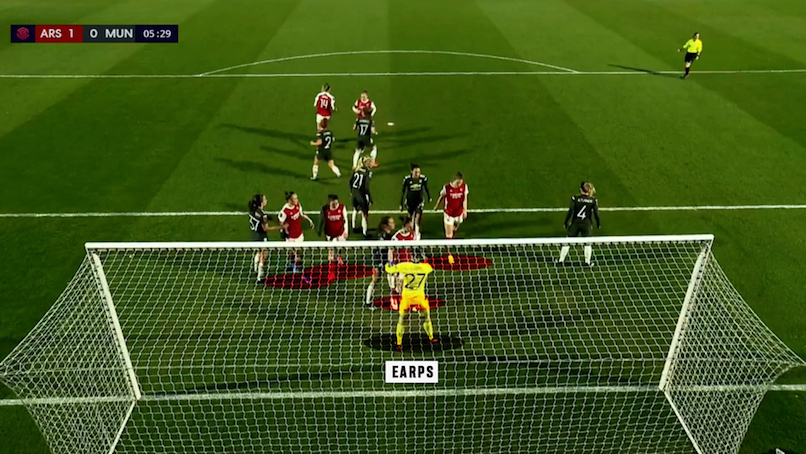 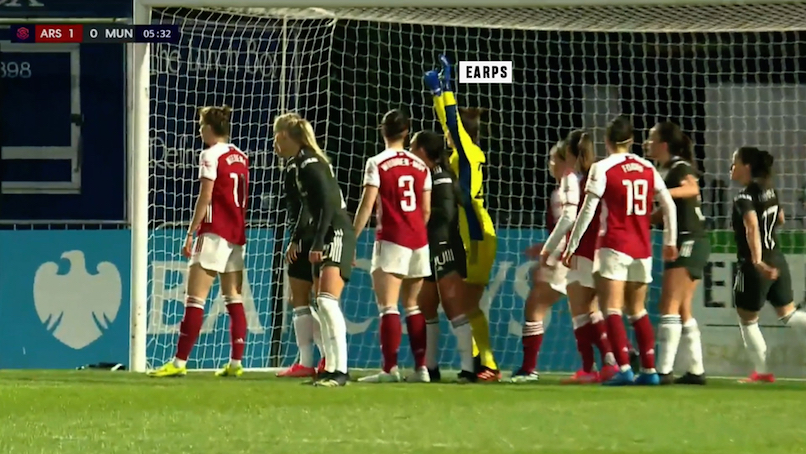 If you look at the goals scored by Lucy Bronze and Tash Harding against United in the clips at the beginning of the article, they come from front post deliveries and that’s what Arsenal do here. Mead aims for Miedema at the front post but the ball doesn’t quite have enough elevation on it and Miedema flicks it over with her heel when the intention was probably to aim for her head. 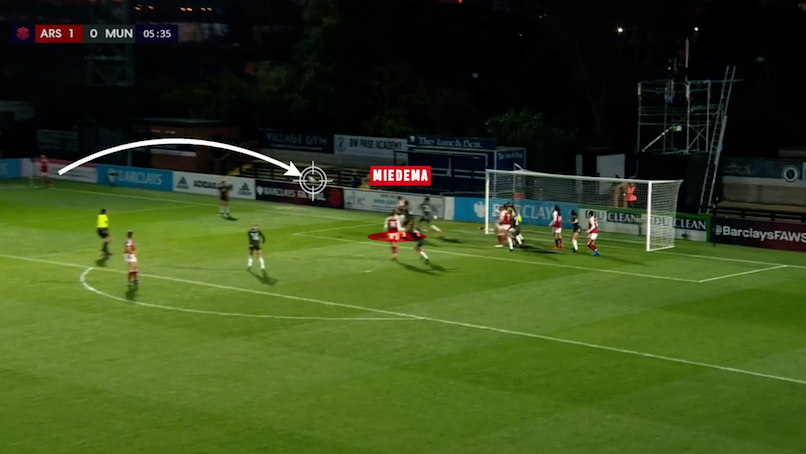 Their second corner is won on Arsenal’s right and McCabe takes this one and Arsenal slightly change tack. They still have the intention to toss the ball into the area but they don’t crowd Earps this time or aim for the front post. 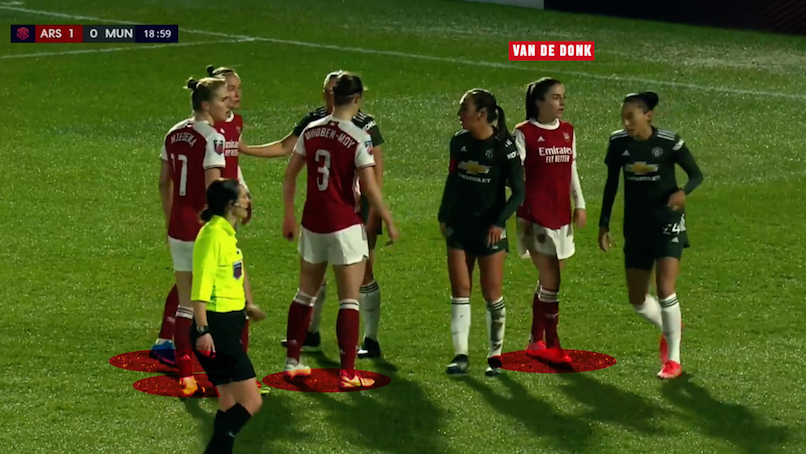 In this picture you can already see that Arsenal have created an issue, there are four Arsenal players but only three United defenders in their mixed zonal and player to player setup. Danielle van de Donk starts off in the back post melee but will quietly drift towards the penalty spot when the kick is taken in case the ball drops there. 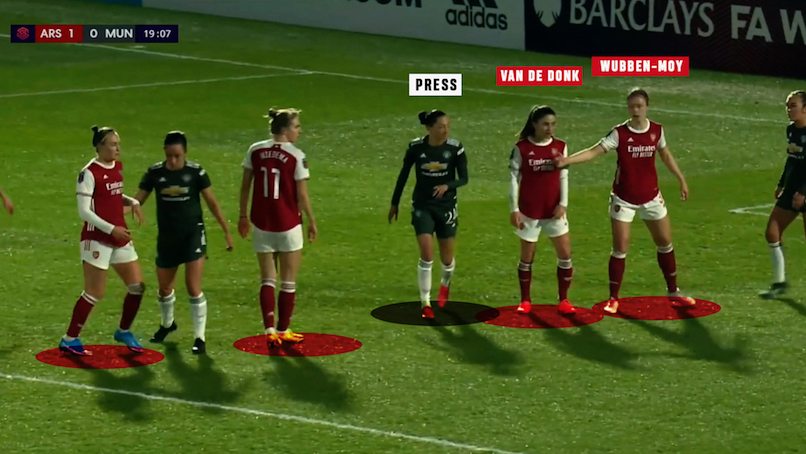 Press eventually vacates the space and opts to join the zonal marking setup in United’s six yard box but you can see Wubben-Moy urging van de Donk to stay behind her. You can also see that Miedema now has space to attack the delivery at the back post too which Foord taking Lucy Staniforth’s attention. 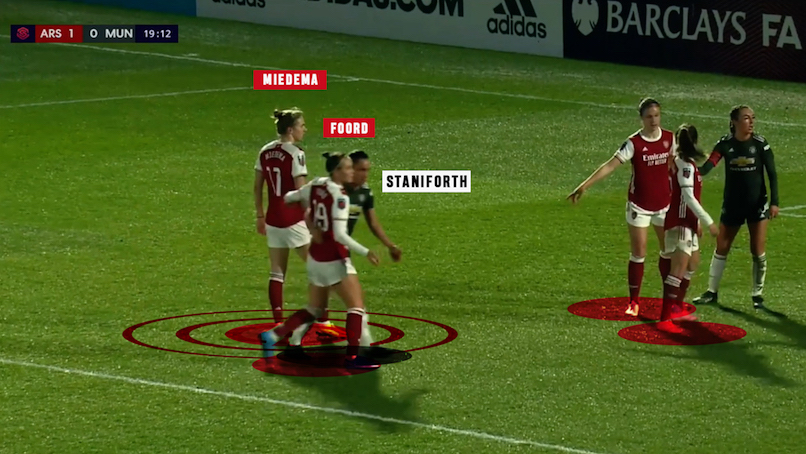 The players know that McCabe’s delivery is going to the back post so the players line up there and look to attack the ball en masse, all running from the same angle. It’s a great delivery that flies narrowly over Miedema’s head. Jill Roord stays in the six yard area to create a distraction for Earps and keep one United defender from visiting the crowd scene Arsenal have created on the back post. 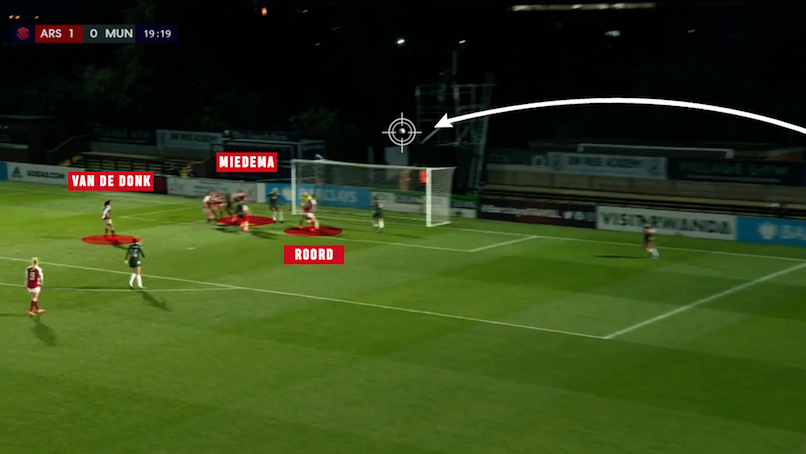 United do indeed half clear it and the ball does drop to van de Donk, it doesn’t drop to her in a position to shoot but it does mean she retains possession and keeps United under pressure. Again, look at the goal United concede to Chloe Kelly in the clips posted at the head of the article. City score in a similar fashion because United struggle to clear the ball because they don’t have an aerially dominant defender. 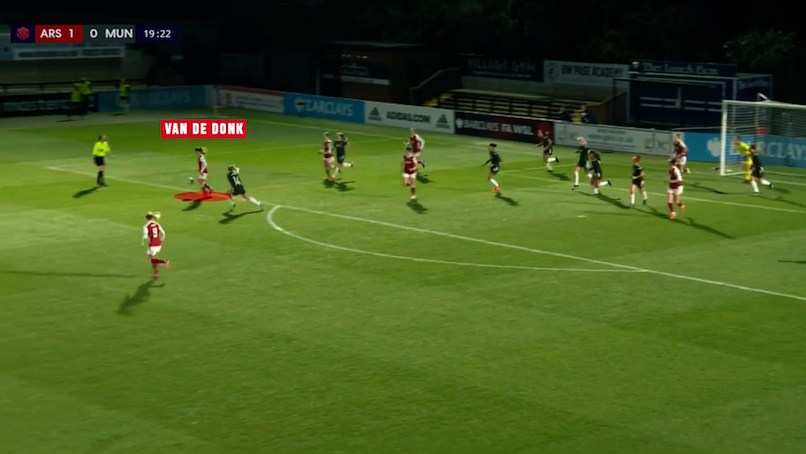 Arsenal opt for the same routine again for their third corner, with that cluster of Miedema, Foord, van de Donk and Wubben Moy creating a numerical superiority on the back post. The size difference between the Arsenal and United players is also obvious. 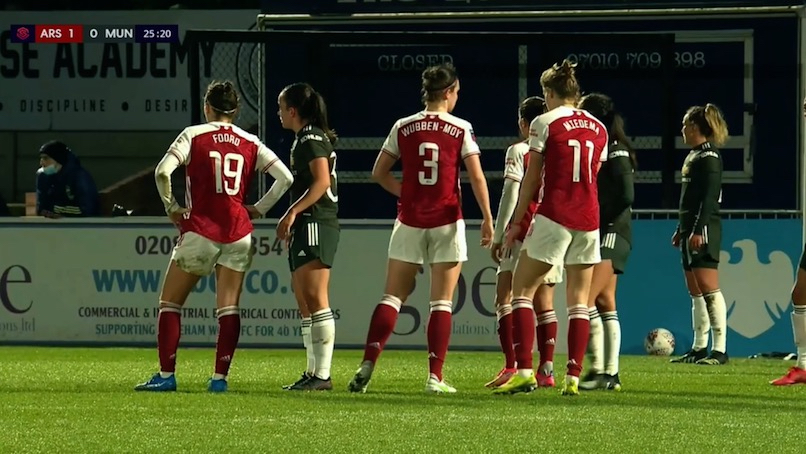 Much like the previous corner, that cluster of four are standing in line to create confusion for the United defence. Jill Roord is again detailed with pinning a United defender into a central position and obstructing Earps’ sight of the ball. 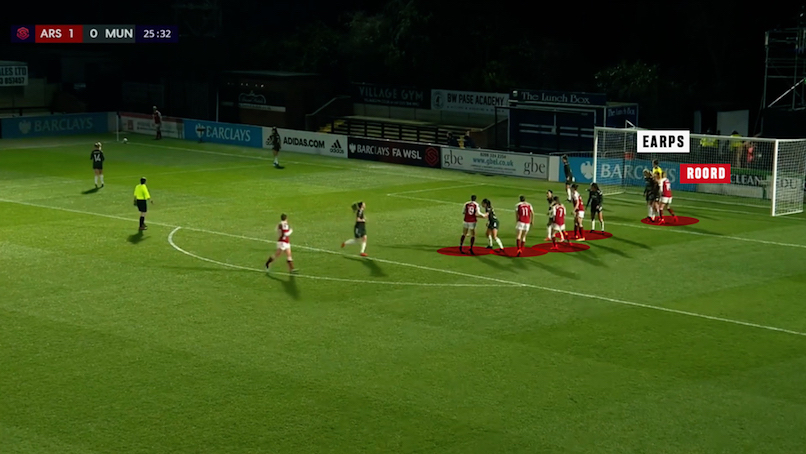 It’s another near post delivery from Mead which Miedema attacks the most forcefully. Just like the first corner, she will look to help the ball on from the front post. Wubben-Moy stays in the area for any potential flick on. Foord has again pinned Lucy Staniforth and taken her away from the crowd scene Arsenal are creating. This time the corner is cleared before it reaches Miedema, however. 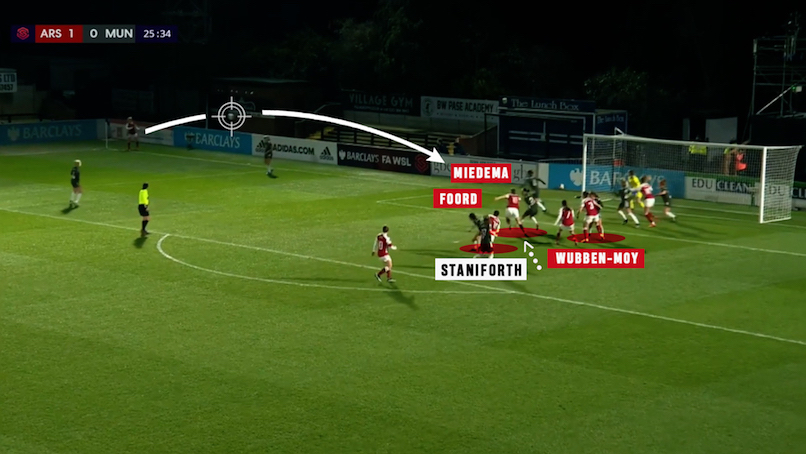 Arsenal win a free-kick centrally just before half time and even then, they want to change the point of delivery and get the ball wide to essentially turn it into a corner. Here, Mead goes wide to Kim Little, so she can whip in a cross from wide. 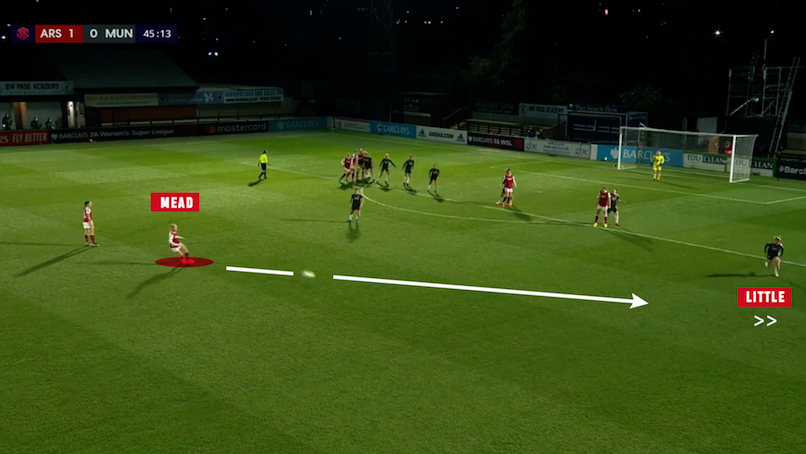 When Kim whips the cross in, that trio of van de Donk, Miedema and Wubben-Moy are again on the back post to attack it. Little’s cross isn’t quite what she wanted but Mary Earps fumbles it. You can see why Arsenal have continually chosen to put balls into the United box in this manner from set plays, the away side really struggle to cope with them. United frantically scramble the ball away. 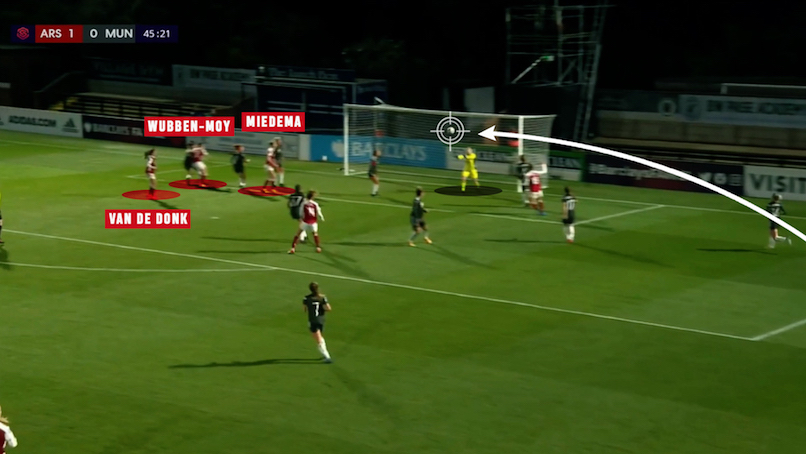 We come to Arsenal’s first corner of the second half. McCabe is taking it so we know that means it’s going towards the back post. We know that Foord will try to pin Staniforth, van de Donk will create a distraction before peeling away towards the penalty spot. 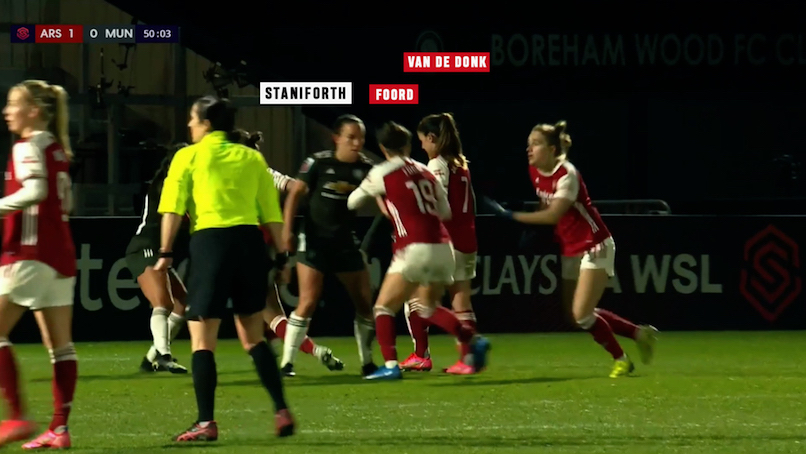 Interestingly, this time Miedema peels away from the crowd scene, taking a marker with her. We know Jill Roord will stay in the six-yard area to keep one of United’s centre-halves and their goalkeeper from dealing with the delivery. 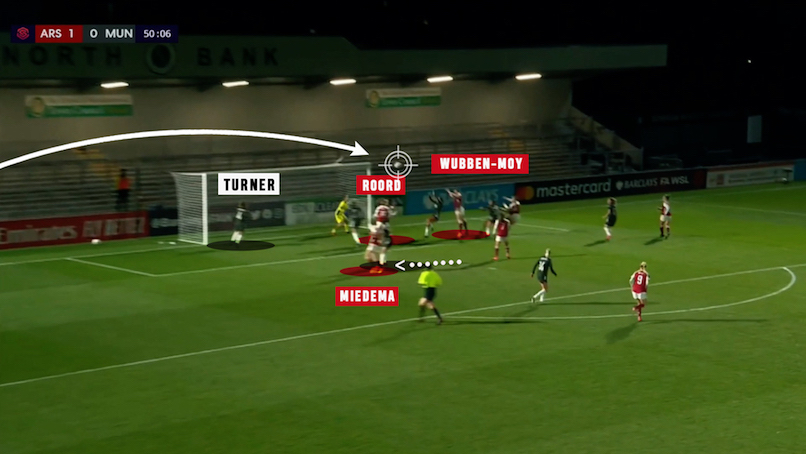 Because Arsenal have varied between front and back post deliveries, United defender Amy Turner has been attracted to the front post in case that’s where the corner goes, which leaves her marking thin air. The delivery from McCabe, just an inch too high for Miedema in the first half, is perfect this time and Wubben-Moy powers home the header.

Even in the 88th minute, a player down and holding onto a 2-0 lead, Arsenal set up similarly for a late corner. This time sub Anna Patten is going to help to attack the ball, with Miedema peeling away in case the ball is partially cleared towards the right touchline and Foord will drift away to the edge of the area hoping to take Staniforth with her and away from the crowd. 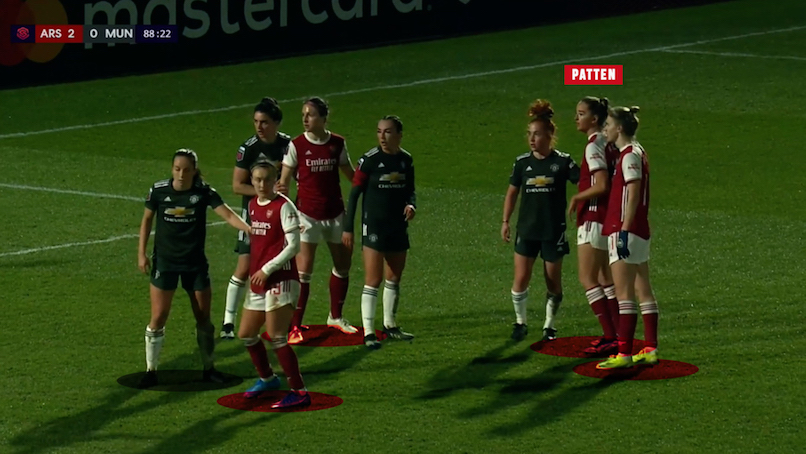 It’s McCabe delivering from the left so we know it’s going towards the back post again. 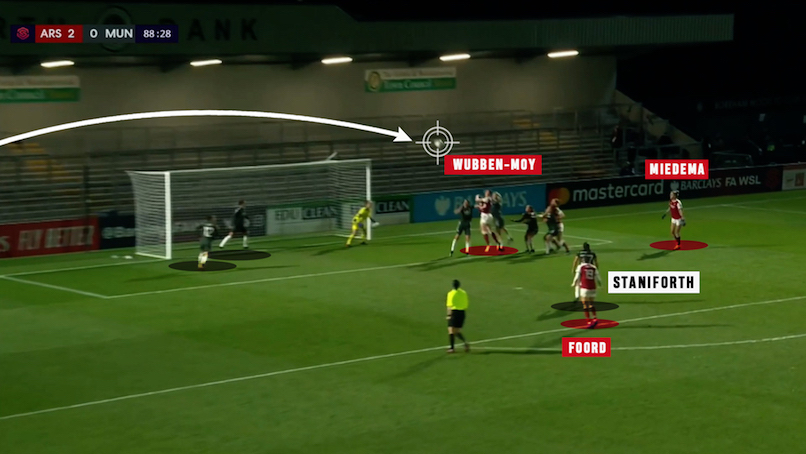 Once again, Wubben-Moy attacks it on the back post and again, two United defenders have been attracted towards the front post. Again, United’s lack of an aerially dominant defender means that though they prevent Wubben-Moy from getting her head on the corner, they can only glance it to Miedema on the back post. Miedema gets a shot away but it’s deflected wide for another corner. 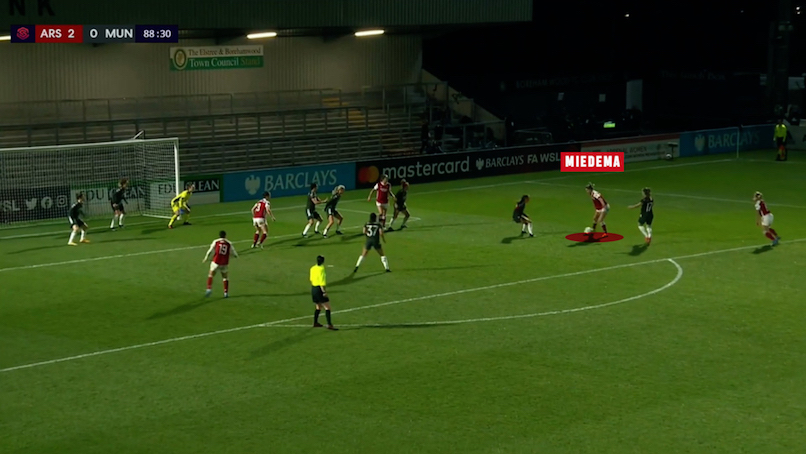 Ordinarily, Mead would take this one but having been sent off, McCabe moves across to take it and I don’t need to tell you from that screenshot that this one is going to the front post. 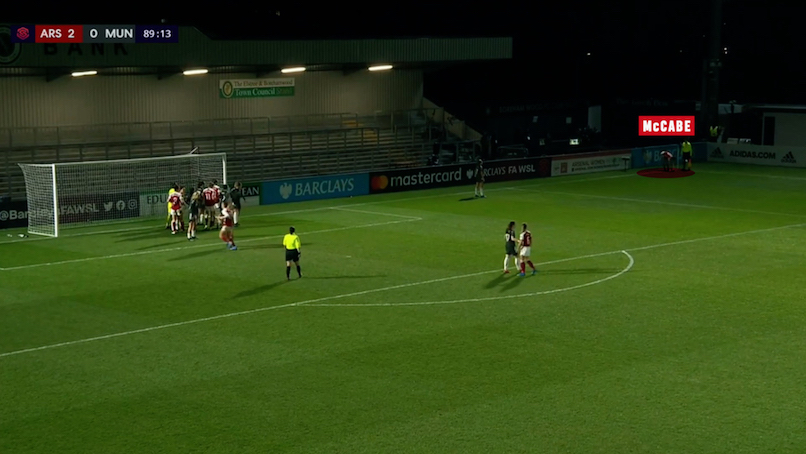 And since it’s going to the front post I don’t need to tell you who the target is. Miedema leaps but it’s again a fraction high and United do actually head this one clear. 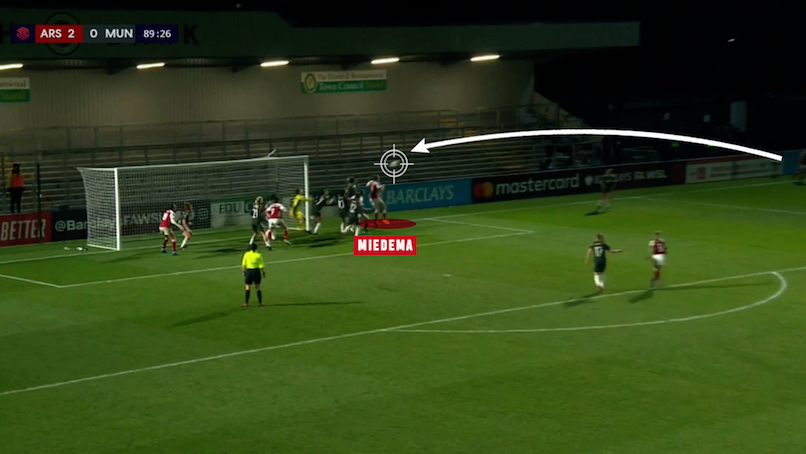 Arsenal consistently exploited United’s weakness at defending corners with a mixture of front post deliveries to Miedema and back post deliveries to Wubben-Moy. A back four of Battle, Harris and the Turners in front of Mary Earps just doesn’t have enough aerial dominance and, to this end, it was confusing that Stoney left Maria Thorisdottir on the bench.

If Joe doesn’t have a plan B, he certainly made the most of C last night.

Thanks so much, Tim. You do a great job.