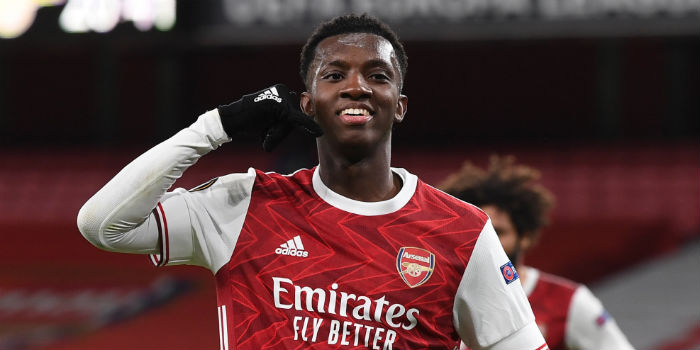 Arsenal U23s are in action tonight as they host Blackburn Rovers and the young Gunners have received a boost in their quest to avoid relegation, with Eddie Nketiah set to feature tonight.

The striker has found first-team minutes difficult to come by of late and, after an absence of almost two years, is in line to start for the young Gunners at Meadow Park.

Nketiah boasts an impressive goalscoring record at U23 level, having scored 28 goals in 38 matches.

Steve Bould’s side will welcome the involvement of the 21-year-old as they look to avoid relegation to the second tier. Arsenal are currently four points clear of the drop zone.

Reiss Nelson, who gave away a penalty against Southampton last time out, is also set to be called upon again, with the winger looking to show that he deserves to be getting at least some playing time for the first-team.

Omar Rekik, who hasn’t played since joining the club in January, is unlikely to be fit due to injury so 17-year-old Zane Monlouis is poised to start at centre-back for the third game in succession.

The game kicks off at 7pm and Arsenal are showing it live on their Twitch channel.

So arbitrarily signing players who have been released by lesser clubs hasn’t worked out?

Not that one – his brother (probably)

Why isn’t Nketiah on loan again?
Forget the U23s he should be out there boosting his value and proving himself against real teams.

He was directly competing against Patrick ‘teacher’s pet’ Bamford and didn’t fit Bielsa’s style. One swallow doesn’t make a summer and there are 95 other teams in the country.. You can’t tell me another loan would be less beneficial than a game every fortnight against teenagers.

Just pointing that not all loans work out well.

That’s about his stamp I think. He will score goals against teenagers. Wish him well but he is not nearly good enough to play for the Arsenal

This January to May period has certainly been a lost opportunity for Nketiah and Nelson. But for all we know, they may have wanted to stay and fight for their place in the team.

Judging by tonight’s performance, Nketiah will have a job to stay in the U23s side.

What the hell is a Twitch Channel?!

Just seen the lineup. Think Bouldy must be a secret Ossie Ardiles fan. Nketish, Balogun, Moller all shoehorned in. And we’re losing.

Yeah, it’s really not working so far, to say the least. Azeez is clearly our best player here, but even he can’t do everything in midfield by himself.

Probably should have played Runarsson and Chambers too. They won’t be used against Spurs on Sunday.