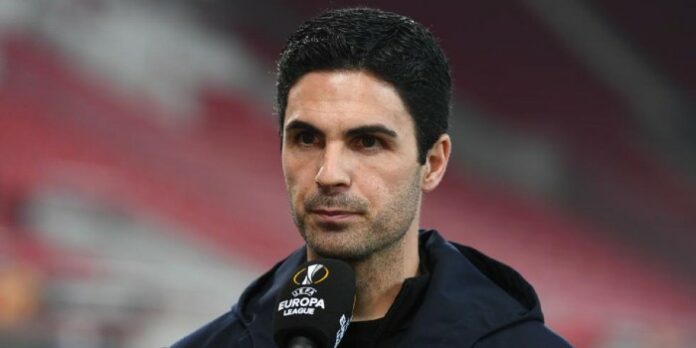 After Sunday’s clash at West Ham, the Arsenal squad will disperse for a couple of weeks as the Interlull kicks in.

Thanks to Covid-19 travel restrictions and the fact many countries are due to play three games in 10 days, it’s shaping up to be a very complicated period for clubs and players alike.

While the Arsenal medical team have done a fantastic job keeping the majority of the first team on the pitch despite a stunted pre-season, Mikel Arteta is worried about the strain being placed on his players and thinks the upcoming break completely ignores their welfare.

“I think it’s a bit too much in general, in a normal year,” he said on Wednesday. “This year, I think it becomes something really dangerous. The amount of minutes these boys have played in such a short time with no preparation, I don’t think it’s right.

“We’re not going to change it. The decisions have been made, the games are going to be played so it’s just about how we protect our players in the best possible way.”

With more than 35 countries on the UK government’s travel ‘red list’, Arteta confirmed that the Gunners will ask that players are not selected for fixtures that could force them into a mandatory 10-day quarantine on their return.

“The ones that are going to be in red zone countries obviously won’t be able to play those games or those fixtures,” he said.

“The rest, we have to allow them to go if they are fit and we will stick to the protocols and all the guidance that we have to let our players go when they are safe.

He added: “We have a few where they might be able to play one game and not the next game. There’s a lot still to figure out. The doctor is in constant communication with the Premier League and the federations but it’s not too simple.”

At the tail-end of last year, Arteta was less than impressed that Pierre-Emerick Aubameyang had to spend a night sleeping on an airport floor after Gabon had a diplomatic falling out with opponents Gambia. Naturally, he doesn’t want a repeat nor does he want the physical routine of his players being completely knocked off-kilter.

“I only want to trust them,” he said when asked about handing over his players to other medical departments.

“We will communicate with them, tell them the state of our players and try to maintain an open discussion to try to manage their loads in the best possible way and not change too much the things they are used to doing.”

THIS IS SO STUPID.

I loathe interlulls, but a pandemic interlull…. right as we’re on a roll too! GAH….

I want a good worldcup after perhaps two years of no fun. If properly protected, I am for the international break.

Sadly I can only upvote once!

Lull in the time of corona.

Very good. I recall that the famous novel was set in Columbia so at least none of our players will be going there.

Gunnar the Gooner
Reply to  Biggles

The whole world is in and out of lockdown and we have quite rightly been stopped from going abroad on holiday and yet dozens of international matches have been lined up ready to spread the next mutation of the virus around the globe!

The players might be ok in their fully tested golden cacoons but what about all of the airport workers, aircrew, etc.

Unnecessary travel has been baned so since when has paying football in another country been necessary?

I agree with you 100%, I think it’s stupid.
But.
Is it any different from going abroad for Champions League/Europa League matches?

Not to defend this shambolic idiocy that is interlull, but the CL/EL is at least 25 players from one team. Interlull you have 25 players from 25 different teams, countries, continents, etc. (at least in most cases).

So it’s somewhat easier to control the bubbles I guess. Though it’s still absolute madness…

But 100% International football is stooopid. At least for European games one squad is travelling as a group. Bringing a bunch of players from different places into an environment requiring physical contact seems reckless in the extreme.

It is only the elite who have continued and many have argued that all contact sports should have been suspended, home or international. Certainly flying to other countries is an anachronism when virtually all other travel is banned.

Sorry but some parts of the world have been FULLY open for the last 6 months with normal life, all businesses open without issue, some are ending mask mandates and many more are following. The UK is quickly becoming an exception not the rule. We have had one of the harshest rules and lockdowns in the world for the longest periods of time. Europe’s news talks about Covid-19 coming through the air conditioning house to house and Spain keeps people locked up under the fear of the ”British Strain” while we are given the SA Strain to scare over?

I wouldn’t be surprised if all Premier League players and close contact staff have already been vaccinated against Covid-19 by now.

Vaccines are neither100% effective, nor yet confirmed to prevent asymptomatic carriage and spread. Third waves and new strains are also concerning, especially when many of the countries have had few jabs.

But it is not only the players at risk is it? As I mentioned there is all of the staff to transport the players and hotel staff who are being exposed providing the potential to spread new variants of the virus. So if you send an England team abroad to play a match and a steward on their plane brings back South Africa II variant, or whatever, and the whole of the UK ends up in lockdown 4 for another 3 months with 1000’s of ordinary people being made redundant because our companies cannot survive with no income and a… Read more »

It’s a pain in the backside timing wise and obviously a concern but it’s not a problem that is unique to us. Clearly the club needs to look out for the players at all times – in this case, as best we can from a distance – but that’s presumably what all the other clubs with players involved in these games will be trying to do (or should be, anyway). A few of MA’s comments – like those about the lack of fans being a major factor in our (first) PL slump – can occasionally give the impression that it’s… Read more »

International football is pretty tedious stuff until the later rounds on a major tournament. In a year like this where a few infections could bring leagues to a halt, there must have been another solution.

I guess it is all about money for Uefa and Fifa in the end.