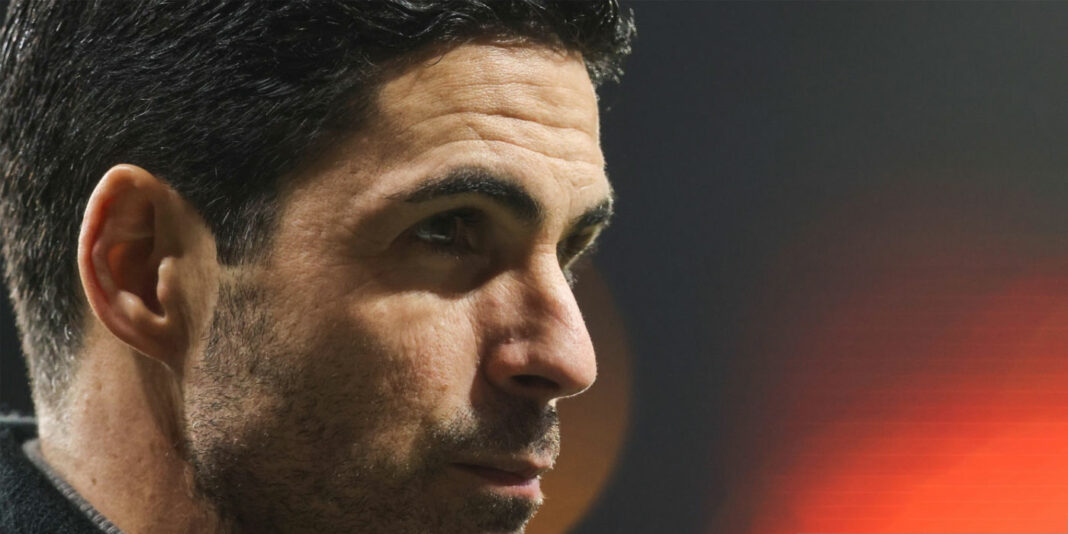 Ever the optimist, Mikel Arteta says that as soon as his team learn to stop giving the opposition gilt-edged chances to score goals they’ll be stronger.

He’s not wrong, but at the moment it’s a recurring theme. After gifting Burnley a goal at the weekend, David Luiz did his best in the first half in the 3-1 win over Olympiacos, before Bernd Leno and Dani Ceballos conspired to let the Greek side back into it in the second.

Speaking afterwards, it was put to the Arsenal boss that we’re our own worst enemy, which saw him reply, “Yeah, they are not far off.

“The goals or the chances that we have conceded are coming from ourselves. That is really positive because the moment we stop it we will be even stronger.

“But the reality is that we have to stop it immediately because if not the games are always there to drop points.

“It is my responsibility, we make them play the way I want them to play, it is just understanding the risk and rewards, the balls we have to play and as I said before, when.

“We have to get better at that, because if not it creates tension and insecurity, and it creates belief in the opponent and it is unnecessary.

“You know you have to play the ball to this player, but when is the difference… is it now, a second later or a second earlier?

“That gives the opponent a chance to press or intercept a pass or not and that is where the difference is.

“To discriminate the decision making and when it has to be done is what dictates in the next action whether you are successful or not. But it is not about stopping or discouraging the team not to play, we just have to understand when to do it and that’s crucial.

“If not you create insecurity in a game that is totally under control and it brings the team into an insecurity mode because you gift to the opponent how much we have in the game, the chances that we missed and it is unnecessary.

“It’s true that the reaction after that to score goal – and we probably should have scored one more – was great to see as well.

Nevertheless, goals from Martin Odegaard, Gabriel and Mo Elneny provided a nice cushion for the second leg, and all eyes now are on the North London derby on Sunday.

You need to stop this immediately.

The mistakes will be less detrimental if we did not insist on playing suicide passes across the 6 yard area or play risky dribbles just in front of the central penalty box area.

Also I feel and have been saying this for sometime that Ceballos is better higher up. Frankly felt he was sharper with his passes up field into their box than Odegaard.

I agree to some extent he’s better higher up against certain teams what I don’t like is he does too mauy flicks and tricks when he plays deeper that are unnecessary. Leno shouldn’t have passed it to him given Bellerin was open and he surrounded by 4 players yet he could’ve passed the ball back to Leno but he chose to do a trick or dribble turn thing which was risky in that situation and thats my problem with him, against benfica the mistake he made was similar in that he was trying to do a head flick to the… Read more »

I had no such feelings about Ceballos. I like it when he moves forward in an overload from time to time but he cannot control himself from touching the ball and running with it when a one touch pass was available to him. Not a fan and not worth the price RM are asking.

The goals we have conceded playing from the back on both occasions Leno took slightly too long…..while Both Ceballos and Xhaxa could have saved the situations playing a first time ball. Part of being a Cm is playing under dangerous pressure and areas like that.

Daveo
Reply to  The Arsenal

Xhaka’s one is on him, he had space enough he just fucked up, plain and simple. Ceballos’ is a different kettle of fish, he received the ball under heavy pressure of 2 defenders, dumb-arse pass from Leno and Leno’s effort to save the shot, which was ok, but not great was poor too. Ceballos is taking the fall for this, but I’d put the blame 60% Leno, 20 % Dani, 20% Arteta (this is clearly tactical, but the extent he is forcing the players to commit to this tactic is clearly beyond what they can do – the safety net… Read more »

sure and I agree, but you don’t get better imagining the players you have can do things that they are not capable of, especially when it is the established players at or past their peaks fucking up.

“is it now, a second later or a second earlier?”

How about about sometimes just not at all? Proper pro’s that can’t see that at times you just have to field kick it. Leno’s a great shot stopper but I’m not sure he has the vision and technique to perform tiki taka at the back tbh, same for Xhaka and Bellerin imo.
But hey, great win!

Everybody disses Elneny but how many ignorant mental lapse goals has he caused us in his Arsenal career? Not half as many in his entire Arsenal career as the four Ceballos and Xhaka have caused in the last 4 matches. Let’s put a degree of respect on Elneny’s name.

Man is good at what he does. He could have being at thiago level if he had a little more vision attribute.

He does have vision haven’t you seen some of the passes he’s made in the past especially under Wenger his assist for Ramsey and Giroud were like Ozil esq and that assist for Ozil and several others bro you need to go watch highlights of Mo Elneny he has good vision and passing. I think in this system and what Arteta is trying to do he struggles a little with certain aspect of the phase but in most cases he is usually fine. Most people and fans want him to be this creative god type of player and he’s not.… Read more »

Lack of Perspective
Reply to  goongot

He is a strange player as he can sometimes pick a great pass too. Just not often enough. Not sure if its a confidence thing or just his own decision not to do it and keep things safe.

Perhaps what makes him so reliable is also what limits him.

Considering our main faults as a team he is certainly refreshing.

how about we stop the ineffective passing from the back?

Indeed, yesterday’s is an oft repeated pattern of play and coached from about Dec. We have been getting away with it but the opposition now have a trap set for it. From a goal kick, press the closest midfielder to Leno. Two games in a row the opposition have done that and scored their only goals.

I think, now Arteta will give them an alternate pattern. However, I really hope he gives the players more freedom.

This insistence on playing from the back concerns me greatly as I don’t feel we possess the personnel to do it effectively.Leno is suspect,Luis is too erratic , Holding,well Holding is Holding.

What has Holding done wrong? He has been fantastic this season. He doesn’t have Luiz’ passing range, but he also doesn’t have Luiz’ propensity for personally costing his team points. It is only a matter of time before Luiz fucks up again and gets another red or penalty that will cost us points or worse – progress in the Cup. You play with fire…

he is carl jenkinson remodelled ie championship quality masquerading in a bang average arsenal team—-can you see him in any of the big 5 english teams—? as i cannot–

Leno needs to be replaced. He makes direct goal conceding errors and is simply average in all other areas.
Arteta messed up again in getting rid of emi.
Both should be removed

Leno doesn’t need to be replaced immediately but I’ll be happy not to renew his contract and sell him with one year left. We never should have sold Martinez Leno should’ve been the one to go and he would’ve generated more money for the club. but its done and its past we move forward. Im just concerned Leno is not learning from his mistakes. I get sometimes you make mistakes fine. But you can’t keep making the same mistakes over and over and over and over and expecting a different outcome and Leno is not learning and showing he’s intelligent… Read more »

A bit reactionary methinks. Leno has single handily kept us in many games we should have lost. He’s an excellent shot stopper. There was no market for Leno, Emi had a short run of games with no one in stadium and there was this pandemic thing going on which limited ability of clubs to buy players. Arteta has publicly said he wanted to keep both but Emi wanted to be a starting keeper somewhere. There was no other decision to make and suggesting there was is rewriting history.

Agreed mate, can’t blame Emi from wanting to leave to get consistent first team football. Leno was always number 1 before he got injured. Talking of Leno, he just needs to use a bit of common sense and hoof it long if the short pass isn’t on. He can see what is in front of him and short passing to someone with their back to the play who cant who is pressing is just suicide as we’ve seen. It may be Arteta’s philosophy to always play out from the back, but Leno must be empowered to make the right choice…!

Sorry, but it is getting pretty safe to say Martinez > Leno.

Martinez’ world class performances at the end of last season were not an aberration as many suggested. Martinez is a great goalkeeper. Leno is a good goalkeeper.

When you consider his dominance in the box as well his ball claiming stat is up there as well Leno tends to not come out and claim balls in the air and lets Luiz Holding and whoever is playing defense handle it. Examples would be the Sterling goal where the cross came in and he didn’t come out to claim it and hoped Holding and Bellerin would handle it but they didn’t another was Aston Villa where Cedric lost the ball and they out in the cross he just stood on his line that’s okay if we had defenders who… Read more »

I read thi Premier League stat and realised that everything wasn’t better before The second highest percentage of goals conceded due to individual errors in Europe belongs to Arsenal. The 12 goals that they have conceded due to mistakes is the most across the top 5 leagues, and having conceded 43 in total, 28% of their goals against tally were easily preventable. It is fair to say that much of the Gunners woes came in the early part of the season, but inconsistency has been a feature, to some extent, throughout the campaign. The lack of consistency in their centre-back… Read more »