Arsenal showed that while they perhaps might not have the same first XI talent and coherence that Leicester has shown this season, they do still have superior depth.

Both of these teams played important Europa League matches on Thursday night and the fast turnaround to the early kickoff on Sunday is always going to be a test of a team’s fitness and ability to rotate. Mikel Arteta (with the added challenge of playing the “home” match 2,400 km away) decide to make 6 changes to the team was able to beat Benfica, while Brenden Rodgers only made 4 changes.

Arsenal came out a bit flat to start but looked to be the team with superior fitness as the match stretched on. In the end, the trust that Arteta put in his changes paid dividends and hopefully, Arsenal will be able to get more contributions from all around the squad going forward.

Leicester 1-3 Arsenal: By the graphs 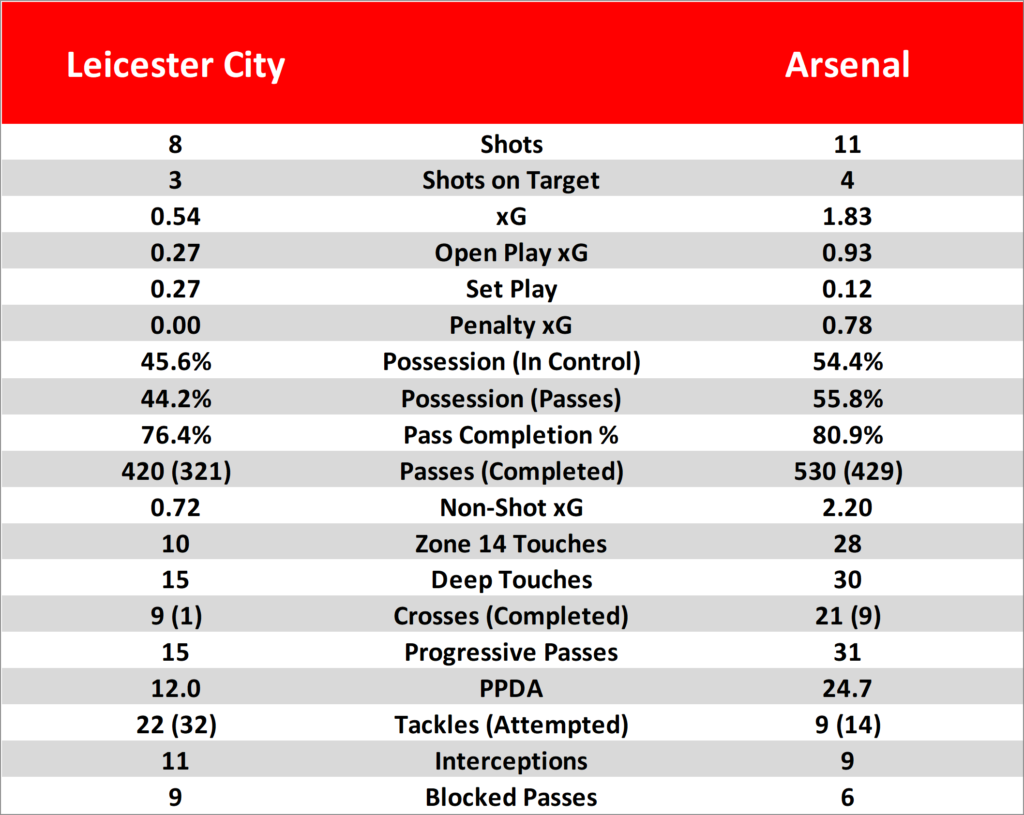 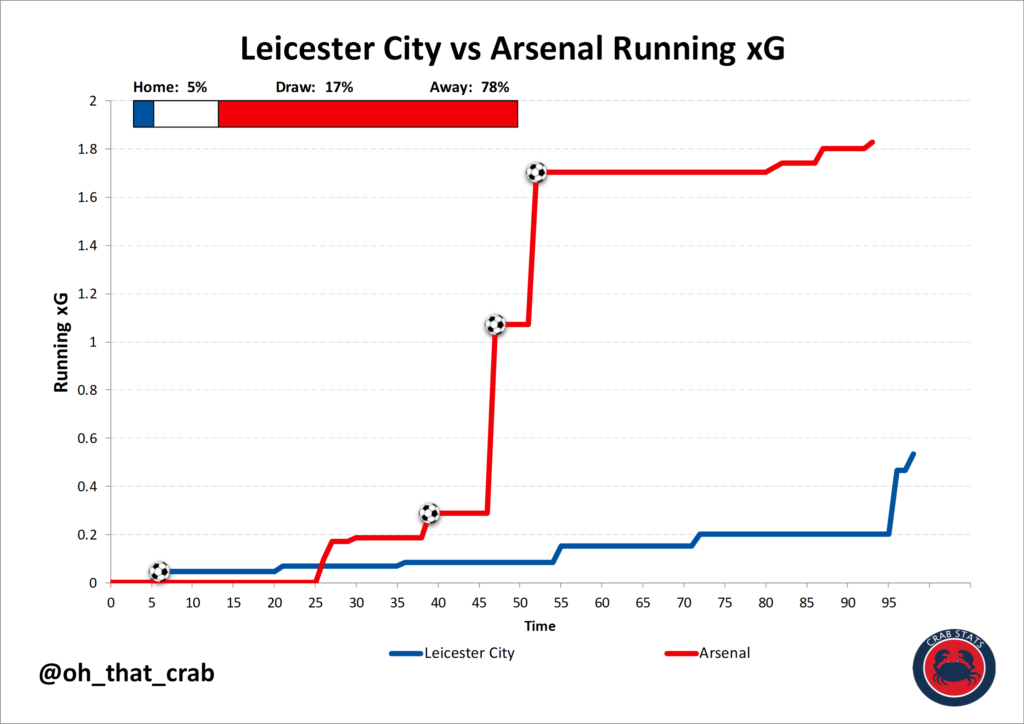 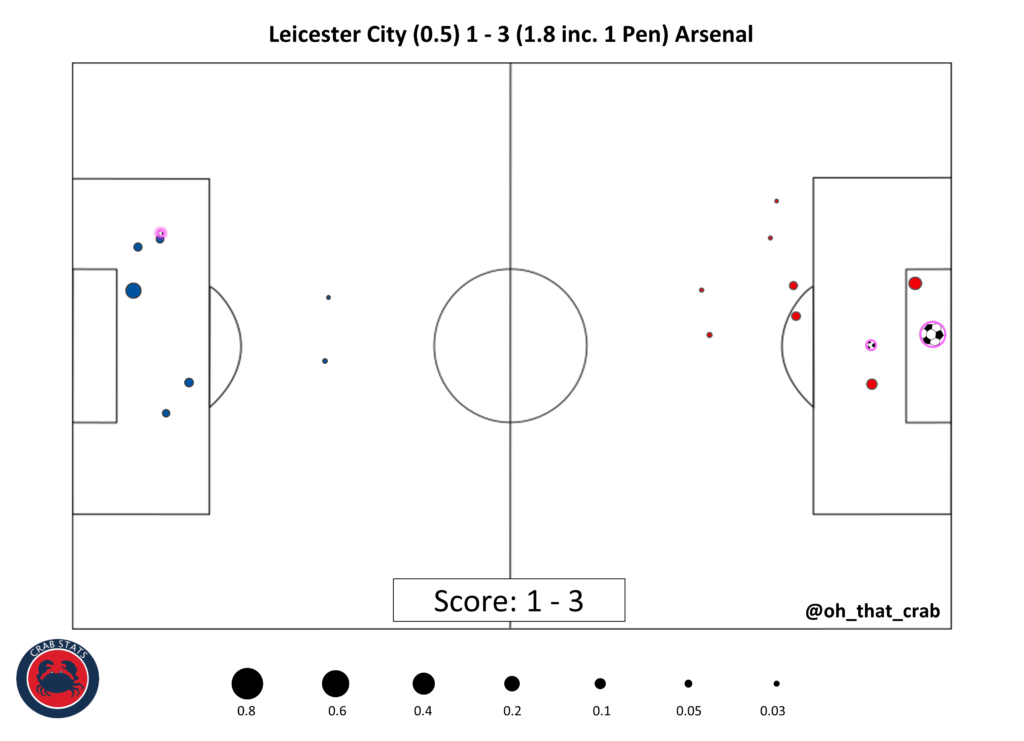 2 – Shots for Leicester in the opening 21 minutes of the match (Arsenal had 0).

3 – Shots for Leicester in the next 74 minutes (Arsenal had all 11 of theirs in this period).

As I pointed out in the introduction, Leicester came out better in this match. The ceded possession (25% to 75% in the opening quarter) but kept Arsenal from doing much with it.

1 – Touch in the box in the opening quarter, with just 1 touch within 25 yards of goal.

0 – Shots for Arsenal in the opening quarter

In the middle portion of the match, Arsenal finally exerted pressure on Leicester. The following stats will be from the second and the quarters of the match (23-68 minutes).

91 – Touches in the final third for Arsenal (51 for Leicester)

8 – Passes completed into the box (2 for Leicester)

This period won deservedly Arsenal the match. Arsenal’s attack was good at getting the ball forward into dangerous positions (especially before the 2nd goal) and the defense did not allow Leicester to get anywhere near the Arsenal goal. 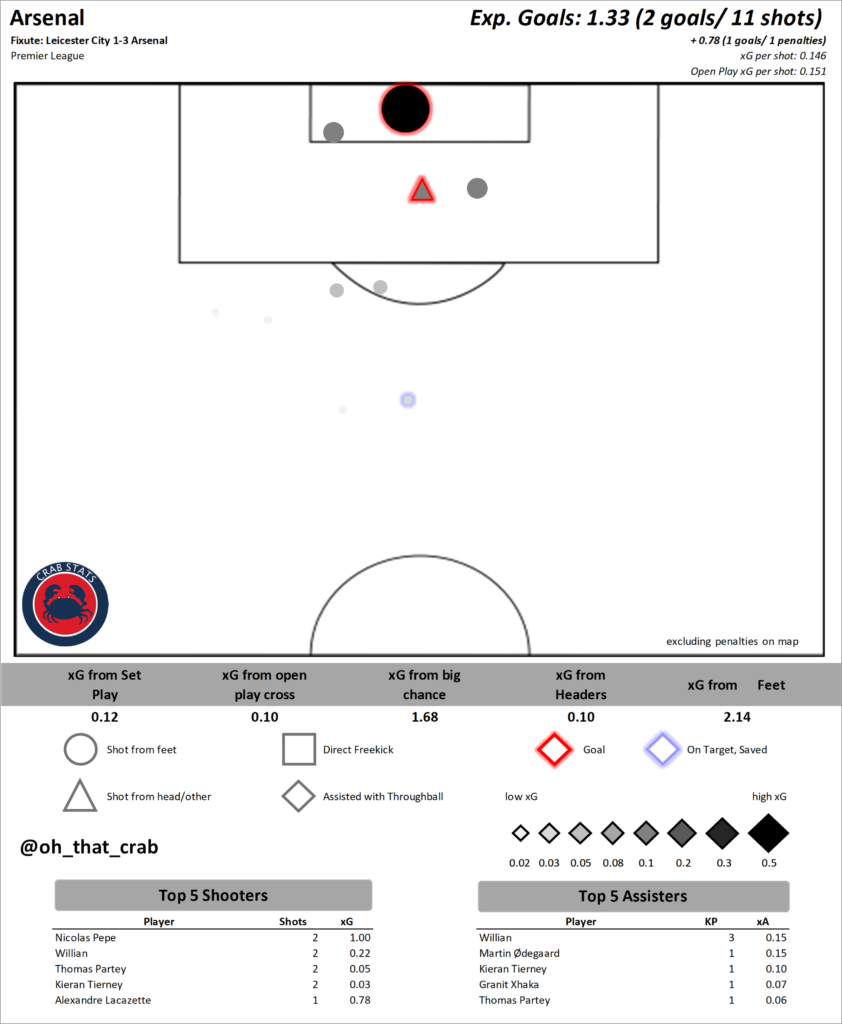 6 – Passes completed into the penalty area (led Arsenal), 5 from set plays and 1 from open play.

4 – Passes completed within 15 yards of the goal (led Arsenal)

3 – Successful dribbles, the most that he has had for Arsenal this season

The heading for the section is bit snarky because Willian was more than useful in this match and in fact he might have been Arsenal’s best player. Not to dig too far into the past, these were the types of performances that I think everyone hoped he would be able to provide this season, even if the logic behind the signing of him was questioned. There would have been very few people (also I think that they would have been wrong because there was no evidence of this in his stats) who have said that he was a useless player for this season when Arsenal signed him.

Hopefully, he can get back to providing this level of performance on a more regular basis because he is going to be at Arsenal for the next 851 days. The last thing Arsenal need is a player on a big contract riding the bench after spending the last 6-12 months trying to clear the team of their previous mistakes.

Willian was the main creative/progressive hub when Arsenal got the ball into the final third but Pepe was the player that was Arsenal’s biggest threat for having that possession turn into goals.

This match was the best performance of his recent run of very solid form for Arsenal. Luke Thomas will probably hate watching back the film of this match because Pepe caused him nothing but problems and he had no answers beyond fouling him when they went one on one.

If I had one complaint about Arteta’s recent lineups (especially in the Europa League) it has been that it is missing a player to get shots. The Saka, Smith Rowe, and Odegaard attacking midfield trio is full of technical ability and creativity but it has seemed light in shots. I think that with his recent performance, Pepe looks like he could potentially bring that with a combination of the two other players. Regardless it is very refreshing to see Arsenal looking to have an abundance of attacking choices to mix and match against opponents and game situations.

Incredibly, Arsenal are third in the PL in terms of points in the second half of the season.

Lots of great signs for our squad, Pepe and Willian better, Tierney back, Mari mostly good and an excellent looking bench.

We may have too much to do this season (though still hoping the EL goes well) but gives hope for next season.

…and behind West Ham – who we’ll be in front of by season’s end.

Agreed. Last season was all about steadying the ship, this season about laying down solid foundations and steering it in the right direction, and next season we should be able to compete for a CL spot. If this season fans still didn’t have any major expectations, the pressure will definitely get bigger next year. We’ve sorted out our defence, hopefully Xhaka and Partey manage to build a solid partnership for the future (early signs look promising), now we need to find the right balance and produce regularly in the attacking third as well. We have good players, general idea of… Read more »

The team does seem to be playing better and the hope is we’ve stumbled on a system that works. The younger players are the real bright spots in this year & we’ve managed to move on a lot of players who don’t fit where we’re heading. There are going to be some more popular players who likely move on this summer (Laca, lot of stories that Hector agreed to stay this year but would be allowed to move on if we didn’t make the CL, Eddie, etc.) & hopefully some young high potential incomings. That said if we finish out… Read more »

I think a 6th place (and automatic EL qualification) is still just about possible though. We’ll have to keep the recent momentum going though, no more slumps.

6th Place is not an auto qualification.

Scott, totally agree with the lack of shots comment.

Having the threat of shots from outside the area, or even near the edge, give defences an extra worry rather than stopping the short one-twos. OK, the odds are lengthened on longer shots but is it any worse than passing in a confined space. Also look how many deflections wrong foot keepers.

Shooting practice must be an element in training. Our midfielders must take more shots, MØ11 appears to take the approach of MO11 in this.

I agree completely with this. Against City for example, you know that De Bruyne, Mahrez, Gundo etc can all hit the top corner from distance, so you have to close them down. This is what allows the space for Sterling/Jesus to score the tap ins, and it’s essential to their play.

1. If everyone is fit do you start Pepe or Willian?

2. Actually if everyone is fit which is our best 11?

The one manager chooses. Until we are behind and I start swearing, throwing things and post #ManagerOut.

On question (1), Pepe, in my opinion. I think he’s shown more on a consistent basis and looks to be coming into his own now. Willian certainly hasn’t done badly recently but, overall, I’d go more with Pepe to see what he can do on an extended run. Question (2) is much more difficult I think not least because I’m not sure that you can really have a “best 11” as such. This is because selection depends much more nowadays on the strengths/weaknesses of the particular opposition and the players best suited for the tactics needed in light of those.… Read more »

Yes, it’s all about matching up against the opposition.

‘If everyone is fit’
Keep dreaming mate!

Its a hypothetical, he can ask anything he wants to.

Compared to previous seasons, we’ve been very light on injuries this year. The only injury we have right now is Smith-Rowe, and we don’t yet know if it’s short, medium, or long term. Everyone else is fit.

It’s certainly better currently but we have had both Tierney and Partey (both key players) out for long spells throughout the season. Hopefully, they will both be fit for longer spells now but it has been – and potentially still is – a worry.

Get out the poo-o-meter!
A colleague of mine here in Denmark saw on a Real Madrid supporter Facebook-group that Arsenal are approaching Real about signing Odegaard permanently.

I too have made sport of Willian’s poor performance this season. Truth is I expected so much more. Willian’s been a key player for Brazil for years. Getting into that team is extremely difficult. The talent isn’t in question. Yes, let’s hope this is the pivot point for his career at Arsenal.