Arsenal continued their quest to throw away matches where they are the better team but in the end, they scored 3 wondergoals to put themselves in a very good position to advance to the Europa League quarterfinals.

With this result, FiveThirtyEight puts Arsenal at 98% to advance, and with Manchester United only managing a home 1-1 draw have actually jumped them as the favorites to win the whole competition.

Now they just need to not gift Olympiacos a lifeline in the 2nd leg and see this out.

Olympiacos 1-3 Arsenal: By the graphs 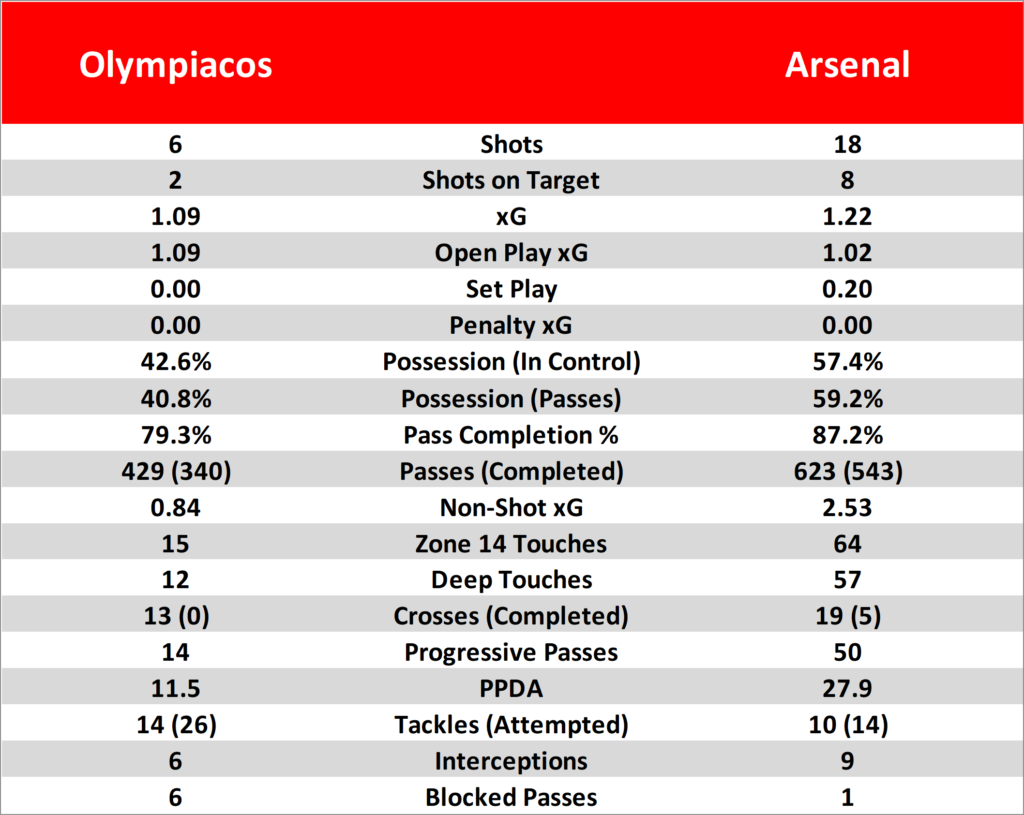 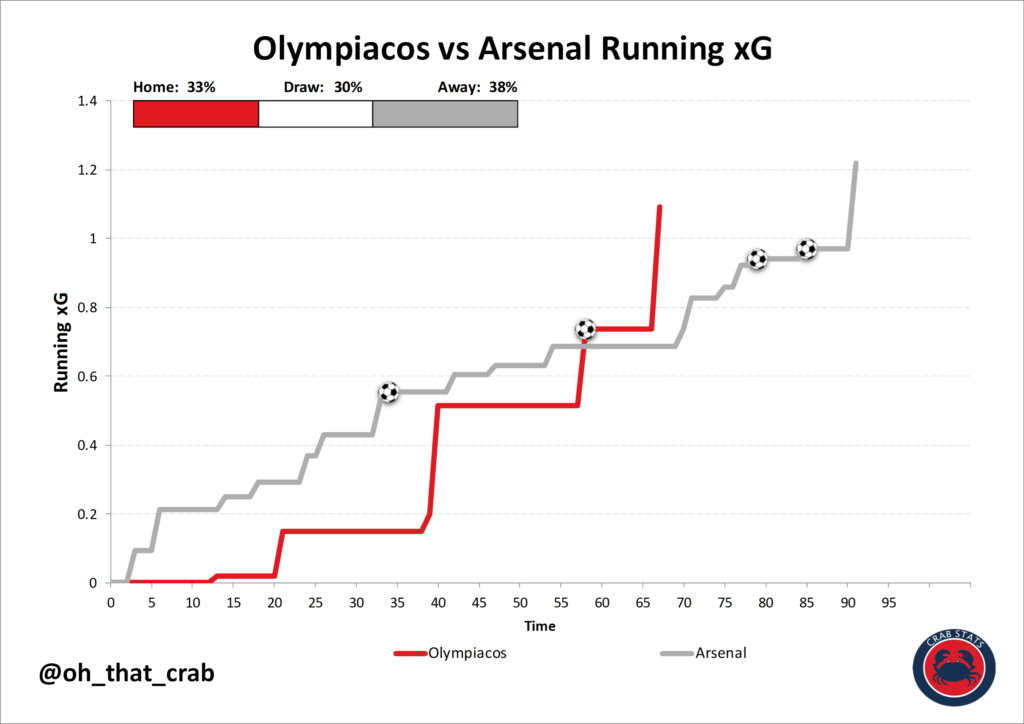 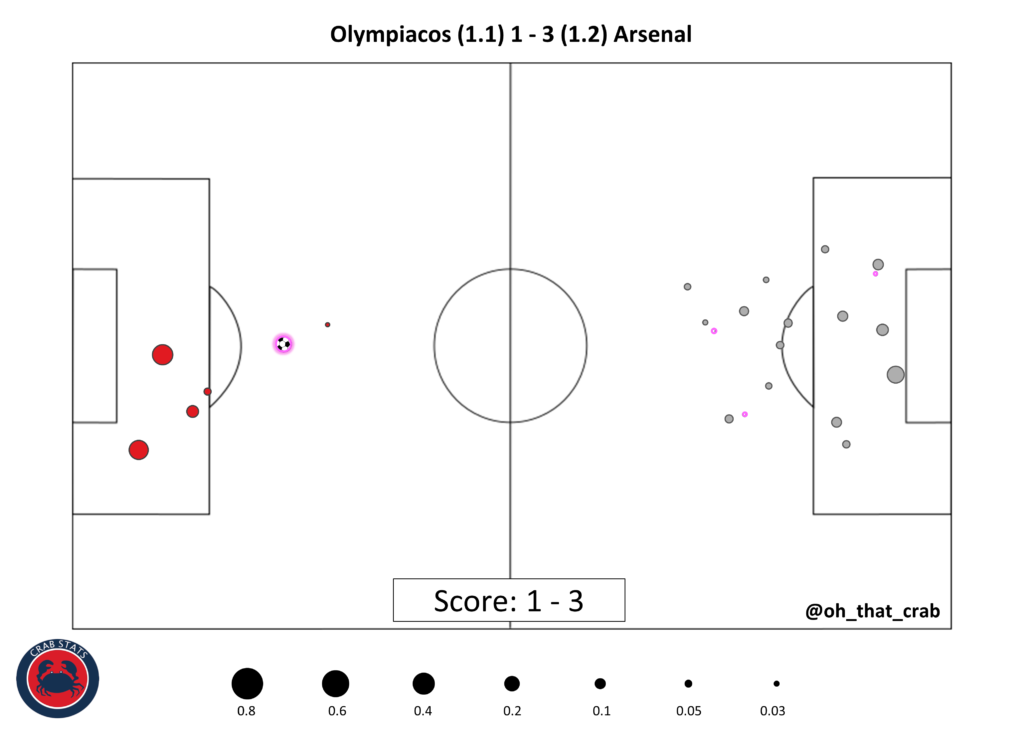 3 – Errors leading to shots by Arsenal in this match. (I asked @Orbinho when the last time Arsenal did this because having this many errors is typically rare but apparently Arsenal managed to beat that in their match against Rapid Wein back in October with 4)

0.7 – Expected goals from the shots that followed the errors that Arsenal made in this match.

0.4 – Errors per match for Arsenal, in the Premier League. That puts them 15th in the League.

Arsenal is really going through a period where they seem to be more error-prone than normal. Arsenal through January was actually a team that didn’t have many errors, averaging just 1 every 4 matches, but there isn’t really a good reason that I can think of to point to, to explain why over the last month besides Arsenal have some error-prone players and that has burned them. Hopefully, Arsenal can get through this period because it is much more difficult to win matches when you are gifting big chances to your opponents from your mistakes.

18 – Shots for Arsenal in this match, led by Martin Ødegaard with 4.

8 – Shots on target for Arsenal, the 4th most they have had in a match this season.

38 – Touches in the penalty area in this match, tied for 10th most this season. 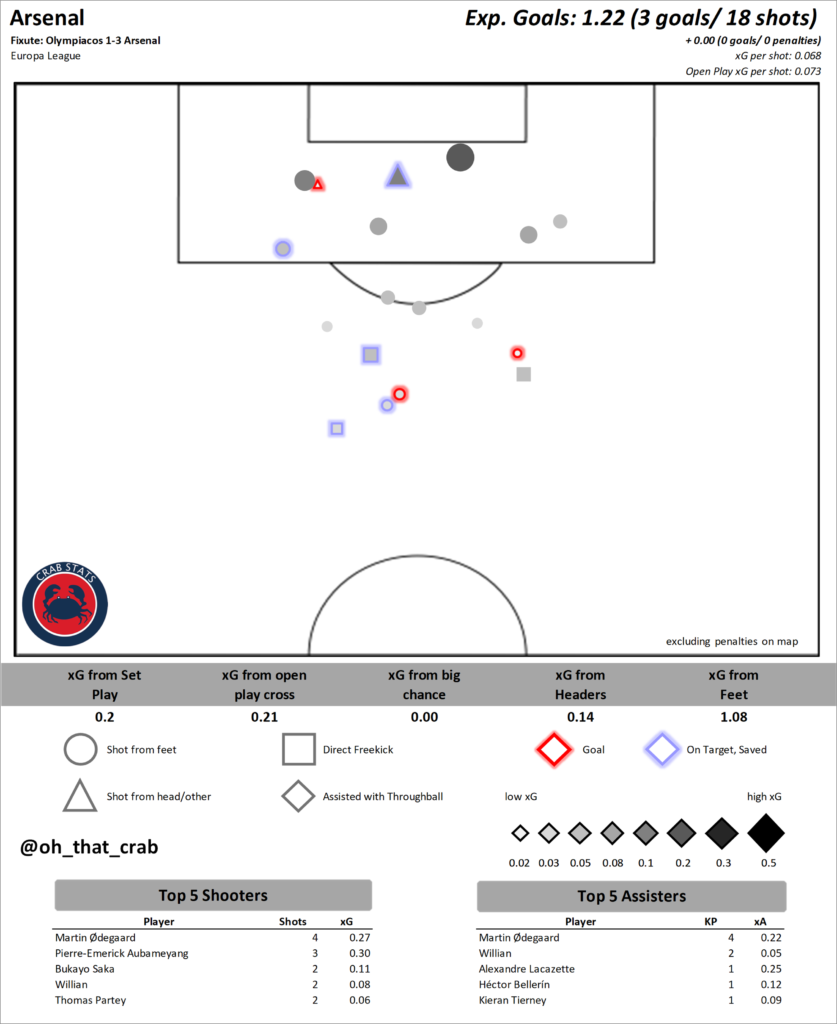 One of the weird things about this match is that Arsenal did well at getting the ball into dangerous areas in this match. Arsenal got 57 touches within 25 yards of the Olympiacos’ goal and 10 touches 15 within 15 yards of goal. What Arsenal struggled with was turning this possession into dangerous shots. In this match, Arsenal created 0 “Big Chances” (an Opta event qualifier where a player should reasonably be expected to score, usually in a one on one scenario or from very close range when the ball has a clear path to goal and there is low to moderate pressure on the shooter.) and managed just 3 shots that had a 10% or greater chance quality rating.

I don’t think that not turning this possession is bad thing… yet. I find it more encouraging that Arsenal are getting into these spots on a regular basis. There is a concept called non-shot expected goals which is similar to the possession value that looks at how often possession in certain areas turns into goals on average. Looking at that Arsenal was by far the more dangerous team in this match. 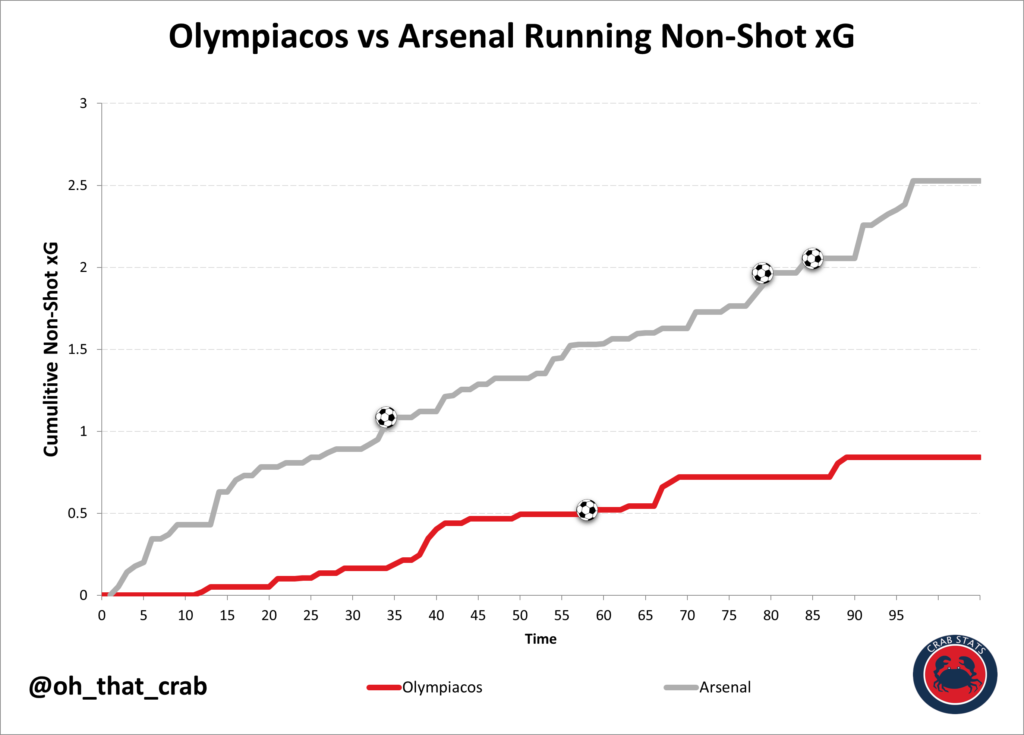 Outside of the errors (which were obviously a huge problem) Arsenal dominated this match.

2 – Shots, 0.06 expected goals with an average distance from goal 26 yards

0 – Touches in the penalty area

0 – Passes completed into the penalty area

58 – Progressive yards carried with the ball

4 – Times dispossessed or miscontrolled a touch, tied for the most on Arsenal

It could be unfair but I had higher expectations for what Parety would be able to give Arsenal in this match. Overall the stats are fine but I think that is far from what we would have expected from the marquee signing of the summer.

He didn’t add much in the way of attack in this match. He took 2 shots but they were low-quality speculative shots from very far out. He didn’t provide any passes into the box and really seemed to defer the midfield ball progression to Granit Xhaka and David Luiz. Overall according to my passing value model, he only added about 5% to the probability of Arsenal scoring with his passing in this match. He did have an assist but that was a simple square pass to Martin Ødegaard who scored a spectacular goal. 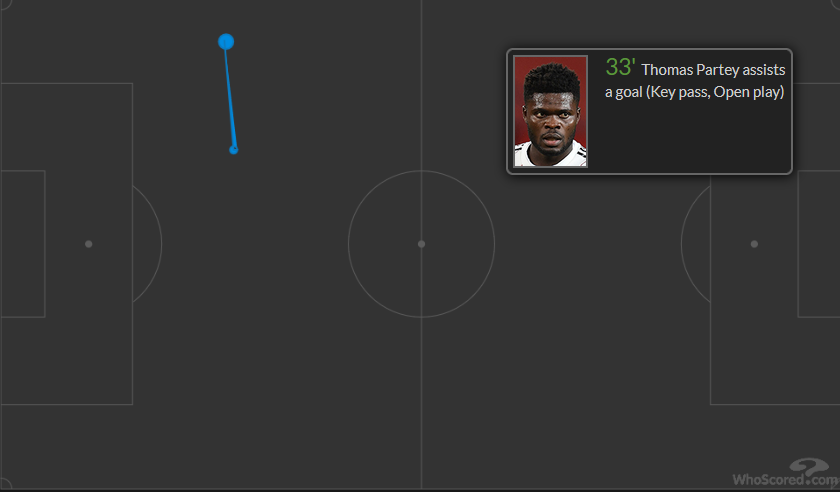 I hope that his performances are more about being rusty coming back from an injury and that they will improve, I think getting the best of him in the North London Derby will be important if Arsenal are to get anything from that match.

Appreciated the non-shot xG, which went a long way to explaining some puzzling numbers. Basically one way to interpret this is that we won because Olympiakos didn’t convert their xG from our errors?

That shot count is nice . The close analysis takes the shine off a bit I suppose but it’s just so great to see the players have a go. The general improvement in our attacking play gives so much cause for optimism, and it seems like certain players are coming into form at the right time.

We were better, and they were not as good, as I thought before the game and we ended up with a healthy (but not impregnable) score line. The continuing errors are a worry but perhaps Olympiacos aren’t the team to exploit them, should there be more in the second leg, although we can’t really be sure about that.

Thank you Scott, really gives another dimension to how I understand last night’s game.

I think Partey ought to be given more credit for the Odegaard goal though. His “simple square pass” was a one touch interception-pass executed with precision, not an easy feat.

Agreed… compared to William’s assist in same match, I believe Partey’s “interpass” was one of the genuine skills of the mass. The speed of execution is what made that chance. If he had choosen to side step the approaching defender before passing, the player would have been closed down. He didn’t do anything else flashy, but everytime has exerted himself he ends getting injured. I think he and Arteta are trying to pace his energy and workload so that he slowly gets back to full fitness.

Willian’s cross was underrated. Decent crosses are actually rarer than most people assume. Blogs’ comments that only 0.000001% of that goal being down to Willian were farcical.

It is rapid Wien or Vienna! And not Wein or Austria as someone on the blog wrote recently in an article..

Funny old game. Started well, ended well, the rest was mehh. When we handed them a lifeline it felt like it could swing either way. Luckily two wonder strikes (when did you last see that?).

Good point about Partey. We really need his fitness. He had a great record before he arrived but had yet to really stamp his mark on the side which will only come from a prolonged run of games.

I think this game kinda highlight the flaw of the xG model when it comes to shooting from distance? Of course the xG is low, if the attacker hasn’t been practicing much, is tightly marshalled, and is up against an alert keeper (ahem Szczesny ahem). However, when the opposite is true, shooting from distance is a very useful item to have in the toolbox. Plus, being a treat from distance also indirectly opens up the space to play tiki taka (and eventually walk the ball into the net), as it keeps the defenders guessing. Back in 2016, Elneny said one… Read more »