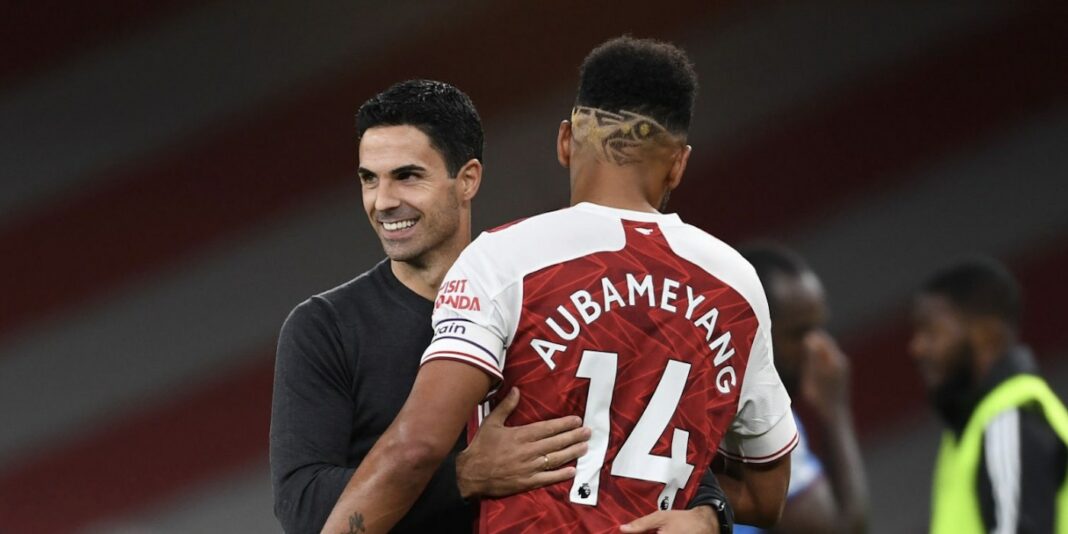 Mikel Arteta has dismissed suggestions that Pierre-Emerick Aubameyang’s form this season is in any way related to the new contract he signed at the end of the last campaign.

Some fans, perhaps still scarred by Mesut Ozil’s drastic drop-off in productivity after he signed his £350,000 per week deal in January 2018, have drawn a line between the two things, but it’s something that the Arsenal boss is not willing to entertain.

Aubameyang has scored 14 goals this season, well below what was expected, but there have been reasons for that beyond an increase in salary and a settled future, and the boss has no doubts about the 31 year old’s commitment.

“It’s easy to connect things when you relate it like that,” said Arteta, “but I’m not suspicious of that.

“We’ve had many conversations about what he wants to do – from last’s year point of view, to his near future, to the next two years. He was very ambitious.

“But then to maintain that level, it’s really complicated. He’s trying very hard, and that’s where he’s aiming to do.”

Nevertheless, Arteta does acknowledge that if the team are to achieve the goals in front of us, domestically and in Europe, Aubameyang needs to rediscover the kind of form that saw him lead the team to FA Cup success last season.

“We have talked for months, obviously, that the rate of goals that we need him to score and to give us the best possible chance to be at the top, is not been what has been in recent years,” he said.

“It’s a factor that is contributed by a lot of things that the team has to do on the pitch. It’s not just his thing.

“But obviously, we need Auba in a different form in the next game to give us our best chance, as well, to finish where we want to finish in the season.

A goal or two against the Mugsmashers on Saturday evening would be a lovely way to get back on track after a difficult couple of weeks, and a good warm-up for our Europa League quarter-finals against Slavia Prague.

He can be wasteful sometimes but I’d still say “Give Auba the ball in box and he shall score”.

Gone because of his own fault?

Auba needs to step up, he’s been rubbish for most of the season. Whatever the reason, and maybe his mum was ill for a long time, or whether it was because he got a new contract and became a Billy big bollocks, thinking he’s made it and can fuck around and be late, we’ll never know. Hopefully it’s over and he’s back to being his happy, sunny, goalscoring self, I really like him and hope so, we need him.

Salibaba and the Forty Thieves
Reply to  Vonnie

I think depression played a part in that that which is understandable. What I just don’t understand is why Arteta chooses to never start Pepe during these periods where Auba dips in form.

He won’t save our season but that doesn’t he should be wasted like Arteta is doing now.

This process will keep faltering if our starting line-up doesn’t consist of our most consistent players.

some portion of fans might complain if he bench Aubs without a clear reason, so everything Arteta did will not look good in front of fans

The fact is that he’s been poor all season, for whatever reason, blocking the path of Martinelli and the rest of kids.

Arteta sounds as if he is blameless in all this, tactics and all.

Gabigol
Reply to  A P

player of the season two seasons in a row, top goalscorer this season, amidst family issues… yet people talking shit about him. he’s scored 3 times more goals than pepe this season, and i see him praised around here all the time. some of you really don’t deserve him in your team

I think it’s fair to give Aubameyang some wiggle room thanks to his past performances, but he absolutely should not be captain of this football club. CLub captains can’t turn up late and be on the periphery of games. Tierney, Xhaka (unpopular among fans, but he clearly is loved by the players and he plays every single game when fit), or Leno should take over next year

A P
Reply to  Spanish Gooner

Xhaka can be a peripheral player, so he already fails one of your conditions. Also, seems like telling supporters to FO is captain material, as insinuated by you.

Opposition teams know that he can’t score against a low block, that’s why in their defensive phase they will pack that side of the pitch. Whereas last year we were able to play to Auba strengths on the counter. It’s not rocket science. But then we offered him a mega deal 3 year contract knowing this. It’s no problem to do that but not to back up Auba with a signing who would immediately help him get more goals the same way he did before or adjust his skillset/position (which is too difficult to achieve as a 31/32/33 year old)… Read more »