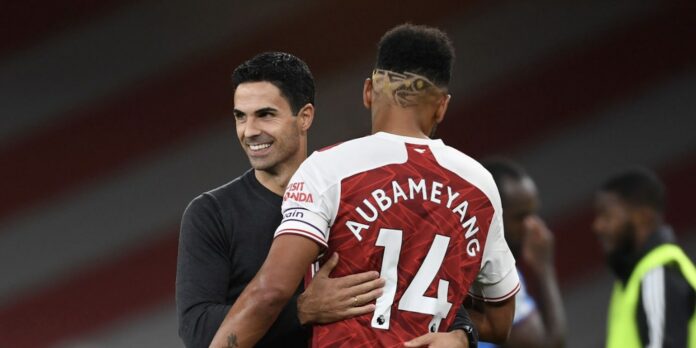 Mikel Arteta says Pierre-Emerick Aubameyang is on the mend having spent a couple of days in hospital after contracting malaria.

The Arsenal captain revealed the diagnosis on social media just minutes before his teammates took to the pitch for this evening’s 4-0 win against Slavia Prague.

After the match, Arteta confirmed that his captain had watched the action at the Gunners’ training ground along with his other injured players.

“We just spoke with him. He’s at home, he’s fine,” the boss told his post-game press conference.

“He had two days in hospital to get the right treatment, but he’s feeling good now. We will see how he recovers. I think he will need a few days to recover from that, but he wants to be back as soon as possible. That’s what he said to me.”

Aubameyang says he caught the potentially fatal disease while on international duty with Gabon.

“Everybody has been in contact with him,” added Arteta. “He’s been really supportive with every team-mate through messages and calls.

“He was watching the game like everybody else at Colney. David [Luiz], Martin [Odegaard], Kieran [Tierney]. Everybody who has not been able to be involved.

“It is what it is, these things happen. He travelled to his country and he picked it up and you know that these risks always exist.”

Arsenal’s medical team initially reported that Aubameyang had contracted flu only to realise the full extent of the problem when further symptoms developed.

“When he wasn’t involved against Sheffield, two days before he wasn’t feeling good, but nobody could expect that was the case.

“They did some more tests and that’s when it came up and straight away the doctor realised very quickly what had to be done and they did a great job. He’s safe and he’s feeling good.”

Well, that is a middle finger to the silly puddings who suggested he was faking it.

have to say too, I really thought he looked fucking knackered in the game against Liverpool.

Either this, or he’s amazingly good at faking.

There go the conspiracy theories!

Thankfully he’s doing much better. It’s been a tough year for him, both on and off the pitch. Let’s hope things improve on all fronts for him going forward.

MARIO DIAMANT
Reply to  Timorous Me

hat trick in the semis and the final 🙂

Sorry but why didn’t he take anti-malarial tablets like you are advised to when heading to that part of Africa? Surely the club doctors would have advised him.

Malaria tabs are a tough one — they can have some pretty severe side effects, and I think the general guidance is to start treatment a week before you travel and to continue for up to a week from when you come back. It’s also tough to speculate on how these might react with any other medications / vitamins / supplements etc. a professional footballer might already be taking. Also from when I last travelled to Africa (west Africa), I asked some of the locals why they weren’t fussed about malaria tabs, and their responses were basically that they don’t… Read more »

Malaria medication generally do not have any major side effects and you are always advised to take them if you don’t reside permanently in that location. Always find it astonishing for European based footballers to catch malaria when visiting the region. They somehow think they are immune or something, Malaria like covid is a killer. I have always taken the tablets when travelling to Nigeria and luckily I haven’t caught it yet.

why are you so negative all the time?

That was a different Martin. I will have to change my name. Actually I’m very positive.

You can be negative without being toxic

It also doesn’t stop you contracting it, just prevents the worst symptoms.

I had cerebral malaria 9 years ago, caught it in Zanzibar. The doctor told me if I had been taking the anti-malaria tablets it would have been much harder for him to diagnose. These days you are advised only to take them once you have been diagnosed, better to prevent by spraying yourself with DEET and covering up at night, mosquito net over the bed is a must as well in Africa

Exactly so how come he ended up in hospital if he’d taken the meds?

You can still catch it if you’ve taken the meds and if you do it’s suppressed by the medication and comes out slower. This sounds like what may have happened to Auba.

Sorry but any African will laugh at this. We live with malaria but the long term exposure negates the need for pre medication. You can have one person in a family or group of close people contract it and the rest just don’t. That doesn’t mean they weren’t exposed.

Depends where you are going. Low risk areas you generally don’t take them, from experience.

Great to hear that he’s better. Malaria is a far more dangerous disease for us here than COVID.

Many years ago I used to live in Gabon and the points above are entirely correct. Taking anti malaria tablets does not prevent you contacting it, it only lessens the severity, and the tablets themselves often make people feel terrible. My mum stopped taking then after a couple of years as it was ruining her mood dramatically.

None of the locals I knew ever took the tablets as they have a natural generic immunity, so this does not surprise me.

Let’s hope the lad makes a speedy recovery. Malaria is not pleasant.

Did they give him hydroxychloroquine ?

Good to know he’s out of the hospital. I’m just surprised he didn’t know because as an african specially from west or central Africa, malaria is your go to sickness when you feel any symptoms.

The main thing is that he’s better. Thankfully, players contracting malaria on international trips isn’t that common. That said, everyone involved in these trips should be aware of the possible risk, with appropriate medication available.

I caught Malaria when I was young. It’s seriously debilitating, frankly I’m amazed Auba managed to play a premier league game with it. Really hope he can recover, despite the haters, he’s a world class striker and we will need him.

How does one catch malaria in the middle of a pandemic if you are wearing a mask most of the time?

A Different George
Reply to  Mark

Amazingly, you can be bitten by a mosquito even while wearing a mask. Well, not if the mosquito is wearing the mask, but they are very recalcitrant about this. Fines have little effect.

Aalborgen
Reply to  A Different George

That is just a great retort 😊 have to admit I had to look up recalcitrant. Man you are good.

Shouldn’t players have a test after coming back from potential malaria countries?

This is much more than marginal gains, this should be best practise.

Losing a 350k a week player for a few weeks because of a test which costs pennies.

Edu needs a kick up the Arrrrse, he is responsible for ensuring we run efficiently. We loaned players out and we are thin in goalkeeping and left back. Because we have to become more efficient due to the poor squad makeup and financial constraints, plus we tightened our belts to give Mikel a better chance come the next transfer window. And he is allowing this issue to extend to way more time than it should have and pushing a 31 yo players limits even more because we didn’t review our protocols over multimillion pound players. In a corporate environment this… Read more »