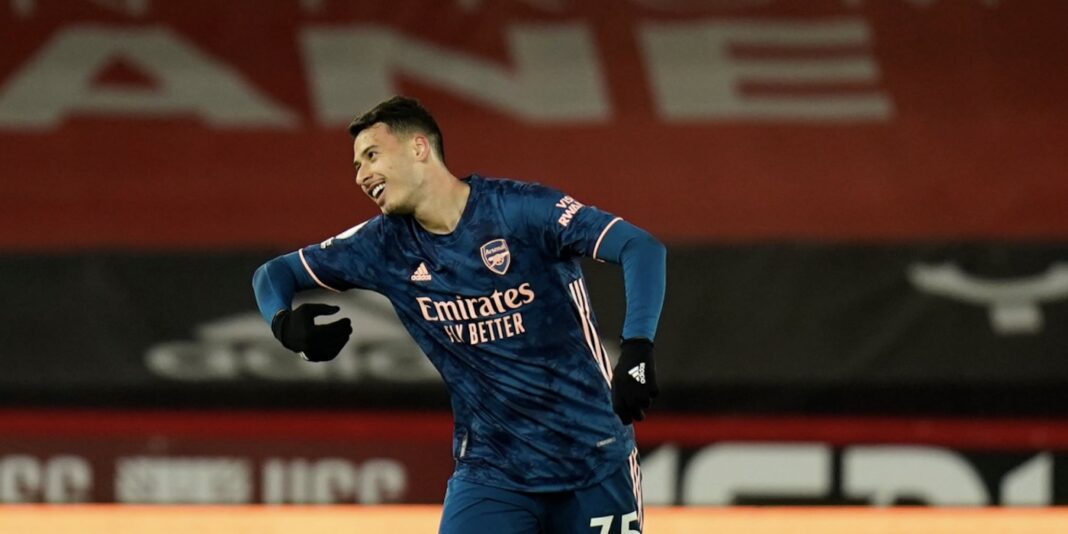 Gabriel Martinelli scored his first goal of the season, and his first since that stormer against Chelsea in the last campaign, during the 3-0 win over Sheffield United tonight.

The young Brazilian was sharp from the first whistle, and repaid the manager’s decision to start him with a goal at just the right moment.

Speaking afterwards, Arteta was asked if he was pleased with the contribution following earlier calls for patience, and said, “Yes I am. I’m asking you to be patient because we have a lot of players at 19 and 20 years old.

“When you compare that with a lot of Premier League clubs at the top end it’s not common. Gabi’s having the right path, the right development, he’s got an incredible attitude and talent and has got all the future in front of him.

“What we have to do is to manage that, try to give him the right amount of minutes, the right games for him to develop to continue to get better.”

Arsenal fans have been calling for his inclusion in recent weeks, but in particular after the disappointing 1-1 draw with Slavia Prague on Thursday, but Arteta insisted that had no bearing on his decision to start Martinelli at Bramall Lane.

“What is affecting me is how I see him every day, how he is, all the staff and what our opinion is on how we want him to develop.

“I’m sure that there is always debate, when I play somebody, somebody else should play.

“That’s going to happen most of the time when you don’t win.”

To Foden (verb) : To release something slowly but emphatically.

Use it in a sentence : Went out on a date with this bird after a bean burrito and had to Foden farts every time I went to the loo.

Why all the down votes?! This is good humor!

We’re not all 14 year old boys who refer to women as “birds” – although obviously farting is always funny.

Really hope we see Gabi from the start on Thursday. Yes he is raw but him brings energy, enthusiasm and determination to our attacking play.
Would be quite happy to see the same team to be honest. Looked really balanced.

When Arteta says you have to be patient about a particular player, it means he is going to play him in the next game.

When he says the player has incredible attitude he means be ready to be dropped.

Although I would love to, I think we wouldn’t see Martinelli start on Thursday. Even if it’s the same squad as today, Willian will start.

I really like him and I hope his ankle is OK, he adds the tempo that we need and if he’s fit then he’ll surely play a part on Thursday.

Well if Aubameyang really has the flu then I can’t see him starting on Thursday and whilst there’s bound to be a couple of changes I just hope it’s not Gabby.

Flu, gripe, a cold- it’s only really in English that you draw a distinction. He had a cold, he’ll be fine

Wonder how Mikel would do with half a full stadium booing willian for Gabi subs.

I’d like to see that happen. He’s had it far too easy.

Really would have liked to see Azeez and Nelson on instead of Willian and Elneny. 2 pointless subs from Arteta.

Yep, me too. Especially Nelson, poor kid hasn’t had any chances recently.

Viv the 🐐
Reply to  StuArse

Me and a mate gasing up an Azeez and Nelson change. But it only ended in a giant facepalm when I saw Willian, Eddie and Mo.

I would genuinely be sympathetic to this argument if the alternatives in that position were not Willian and/or our ‘star striker’ being told to track opposition fullbacks.

…and because Willian is better at defensive teams with low blocks

“Because there wasn’t much space to run in behind, it was a really tight two lines, 4-4-1-1, or 5-3-2 at times, they were a really, really low block, not much space to run apart from when they set the line around the 18-yard box,” Arteta explained.

“You need people to unlock that, with special qualities in tight spaces to create movement and I think Willi was really helpful tonight.”

Sorry Arteta but I strongly disagree with Willian over Martinelli

Haha thanks for that I get that Martinelli is at his most effective against high lines, and Willian at his best against low blocks. But I’d still rather have Martinelli in both situations. You still absolutely need pace and intensity to break down low blocks, rather than Willian’s plodding ‘will this do?’ style of play. Willian doesn’t have the vision, technique or final ball to make up for his lack of energy. When he was good for Chelsea 80% of his game was built on his work rate and pace I do actually sympathise with Arteta a bit for holding… Read more »

If Arsene erred by picking players too young (perhaps risking them becoming injury prone) Arteta definitely errs by keeping them waiting too long. Under Wenger, Martinelli would be a regular starter. And Willian would be nowhere near the first team.

Because Wenger would never have signed him

He might have wanted to, but I doubt the one year rolling contract would have tempted a player after his last big payoff.

A lot of other teams have 19-20 year olds that plays almost every game. What makes Martinelli so fragile? Why do we have to be careful giving him playing time?
No one is asking Martinelli to carry the entire team. Most of us want him to play because he is the better candidate compared to certain others….
Again, lets give him playing time and let him evolve on the pitch. He might very well be an important part of the future (many of the older players are not)

Who? Hudson-Odoi, nope. Greenwood, nope. Troy Parrot, nope. Remember Mount is like 22. There really aren’t many teenagers in the league. That’s how Saka alone has scored as many goals as the others put together this season.

He must be rewarded after scoring on his first start in a long time. Show some confidence in him play him on Thursday!

Actually it was Martinelli who played that game as well and his up tempo play actually set the tempo for ESR and Saka which had been lacking from the more senior players. Arteta’s comments about how young players have to be patient and wait is troubling. It’s how we lost Gnabry. If they are good enough to play then play them. Martinelli and Pepe are similar in one respect, you don’t know what they are going to do w ball at their feet. We need more of that unpredictability in the forward line instead of the predictable technical security back… Read more »

Martinelli has a strikers instinct and IMO should be tested for the CF role. He also has ability on the left in lieu of Auba but I don’t fancy Auba up top as he is not competitive, does not retain the ball well under duress. Laca is likely to be sold this summer IMO. frankly I mention last summer we should have sold on Auba at high price and extended on Lacazette. One reason is whilst Auba was scoring heaps last season, his game is based on pace and space. Laca plays a pivotal role for the squad in congestion.… Read more »

I’m afraid the one aspect of Guardiola’s management Arteta’s picked up is his tendency to overthink important games.

By now he should know which players are good, which are bad, and find a way to play the good players and play them to their strengths.

You don’t need to prove to us you’re the tactics wizard.
﻿
Just play the good players.

Who knew MA loses his sleep over internet comments

“That’s going to happen most of the time when you don’t win.”

What you mean of course, Mikel, is “That’s going to happen when you don’t win, which is most of the time…”

He combines well but doesn’t necessarily help in building up the play directly.

Needs lots of support from team around him to be effective, much like Auba.

Difference is that his dribbling skills are very good and his work defensively is good. But for a young player who still hasn’t played 50 games he runs the risk of burning out his joints given his intensity and loading during games.