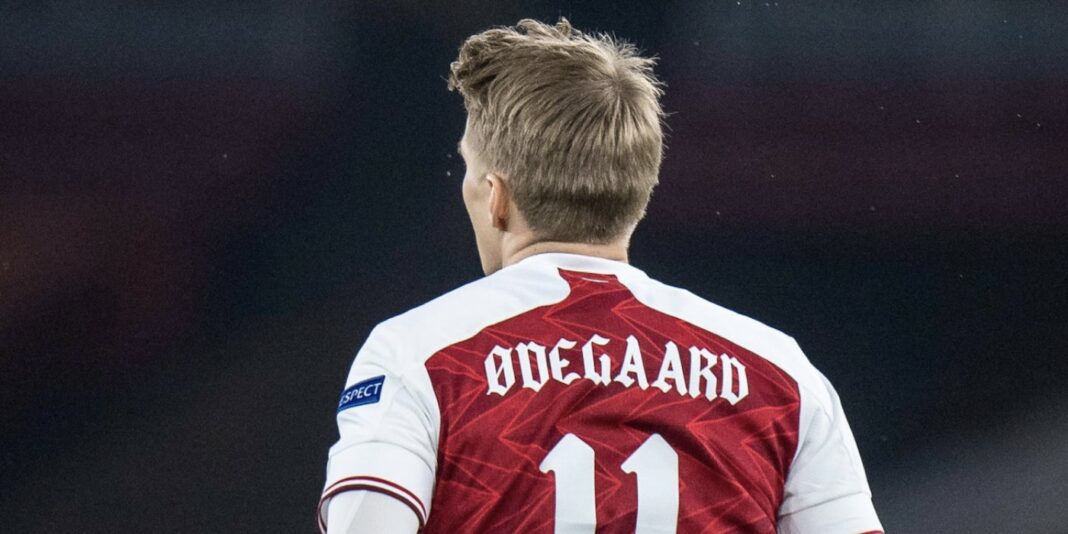 During the international break, Martin Odegaard said the two things he was looking for most when he considers his future were ‘stability’ and ‘development’.

The Norwegian international has quickly become a key component of Mikel Arteta’s side, and his comments were put to the Arsenal manager as a potential hint that the player might like to stay in North London.

The Spaniard was quick to play down any discussion which might reference a permanent deal, but did say it’s something that would be discussed at the end of the season.

“I don’t like to read between the lines, said Arteta.

“I speak with him every day. I see his face, his body language, he seems really happy right now here, and our contract with him is until the end of the season.

“What we have to do is try to make him perform, develop and be as happy as he can be, and that the team is going to be reflected in better performance, better results.

“At the end of the season, we will see where we are and we will have a discussion.”

It seems unlikely that the subject of convincing Odegaard to stay, and what kind of a bid we’d have to put together for Real Madrid, is something that won’t be discussed until the end of the campaign.

In private, those kind of discussions will be taking place, but understandably making them public, much as we as fans would like to know more, would probably be counter-productive.

Arteta is keen for his players to focus on the games left in the Premier League and Europa League, with the possibility of a European trophy and Champions League football still to play for.

“Every game for us is a final.” he said in relation to priorities ahead of Saturday evening’s visit of Liverpool.

“Three points means a lot in the in the table, and we need to go for them. So we need to win as many games as possible. We know that.

“And then Europa League, we have five games to have that cup in your hands. But you have to go game by game because every game in Europe is tremendously difficult.

“Slavia Prague, seeing the results that they got against top sites and teams that’s playing in this country, and they’re in a better position than us.

“So that’s the level and you cannot get surprised by thinking in a different way.”

Securing Odegaard on perm deal is important. However securing European participation next is more important.

Let’s get the 3 points tomorrow, apart from the proverbial 6 pointer, the psychological impact to both sides with the 3 points for the final straight of the season will be big.

I imagine the two issues are related. If we are able to win the Europa league and secure champions league football, securing Odegaard next season is significantly more likely. The player will have more incentive to stay, and we will have more financial security to make an offer.

Just happened to see some report that Haaland told Madrid that if he goes there he wants Odegaard to stay. Hard not to see some logic from his side if that’s true – he’ll be aware from international level that Odegaard will give him goals.
So let’s hope Madrid opt for Mbappe, we take Odegaard, and Haaland spends another year before joining us for a championship push in 2022-23.

So let’s hope Madrid opt for Mbappe, we take Odegaard, and Haaland spends another year before joining us for a championship push in 2022-23.

Fuck yeas! Just in time for the 5 year anniversary of Harry and Meagan’s wedding where Markle plans to travel the length of the country giving out hand-jobs to promote their diversification into the organic hand cream market.

What a year that’s going to be!

The fuck you on about?

Arsenal failed to sign Mbappe in 2017 so he would move to PSG, run his contract down in time for a cash-in, enabling Madrid to step in and sign him instead of Haaland, thus removing any Norwegian links for Odegaard to stay for, and requiring Real to sell to fund the move. Dare I say it, Arsene Wenger, he’s done it again

If we we can win the Europa league is there any reason why odegaard wouldn’t join us? He seems to get along with arteta and the other players an no doubt realizes he gets much more time with the gunners then real? It makes slipping into the Europa league or Winning the Europa League even more important. It would create a dream squad in 5 years

Totally agree with you.👍

You make it sound as if Madrid has no say in matters at all.

He’s got two years left on his contract. If he refuses to extend they will sell to get maximum value. Player has some leverage here.

I access Arseblog News via my bookmarks and up comes ‘Club to evaluate loanees at end of season’. Yet on NewsNow this is the latest post?

This started happening to me too

I try to be logical and not get my hopes up about keeping him, because look at him play he’s magnificent! Why wouldn’t Madrid keep him and start him next season to usurp their ageing creative attackers?? But then I watch how well Saliba is playing on loan and how he seems a perfect replacement for Luiz with his distribution to partner Gaby’s steel, and it makes no logical sense that he’s not at Arsenal learning from Luiz and taking his mantle. Football is weird.

I do like Arsenals new approach of try before you buy. We wouldn’t of signed Xhaka if he was on a season loan. Odegaard is definitely the player we need and Ceballos not so much

As much as I’d love us to sign Odegaard my preference would still be to buy soumare. Not only an upgrade on xhaka but potentially Partey too. And i don’t see how we can afford both. I’d even like us to strike early and go for Camavinga and really future proof our midfield. Ultimately we won’t buy anyone if we don’t sell and there’s probably 7 £10m assets who we really should work hard to get rid of as soon as possible

Latest reports suggest that either (a) Real Madrid could be open to selling him to help to fund a bid for Haaland which may, or may not, be good news for us depending upon who else is interested as several other clubs now appear to be, or (b) Haaland wants his mate Odegaard at Real Madrid (by implication as a condition of any RM deal) which is clearly bad news for us. Who knows, so we’ll just have to wait and see.

I would rather keep Mavropanos. Lad’s been real influential since he moved on loan

No foot Norbert
Reply to  Gunner

Holding has to be worth more than 15m. He doesn’t get enough respect imo

Yes, but he’s “worth” only what another club is prepared to pay – as with any footballer (or any “commodity”, come to that). In “normal” times, he probably would attract a lot of attention but we’re not in normal times regarding football transfers and there’s little spare cash outside of a handful of clubs which are mainly interested in battling it out over a few “superkids”. It’s best to wait and see how things go in the summer.

I think he should have 1 more year on loan. He’s been impressive when played this year, but it was another injury hit one and because of that won’t generate much of a transfer fee. We’re also very well stocked at RCB with Holding, Chambers and Saliba (assuming Luiz leaves).

If he can stay fit and in form for a whole season at Stuttgart next year he could triple or quadruple his market value. Which we could either cash in on or a position might open up here. Low risk, potentially high reward gamble

Yes, we can hope but I agree with you it’s not that realistic. In the current market, I can’t see us shifting all the players you list, not for the prices anyway. Many clubs will be looking to trim their squads (given they’ve lost up to 25% of income from Covid as we have) so we’ll be selling, or trying to, in a very crowded market – not usually a recipe for high prices. As to purchases, there are several clubs now interested in Odegaard according to reports (who wouldn’t be given his current form?), all of which can probably… Read more »

Yup, I agree. What we’ve got going for us is the important role he’s already established for himself in the team, something he hasn’t been able to do at RM. That said, many other clubs could offer same. The deciding factor may be that RM is more broke than the rest, yet still they have their eye on one of Haaland or Mbape. They may sell him to raise cash for one of the two most expensive players in the world. Let’s hope he likes London and Arsenal.

No foot Norbert
Reply to  MojoWillneny

Isn’t he home grown though. Probably wouldn’t be able to sell him even if we wanted to.

Madrid can’t sell odegaard. All their key players are at the end of their careers. They need to rebuild and they have no money. They need more odegaards not less. Selling all the best up coming players so they can buy a single striker is complete madness

Did he actually say “I see his face”?. Maybe the team selection is based on looking at the faces of the players and the head hair length. Pepe always looks like he couldn’t care less.

I hope we beat the shit and shiit out of those cunts tonight.Coyg.