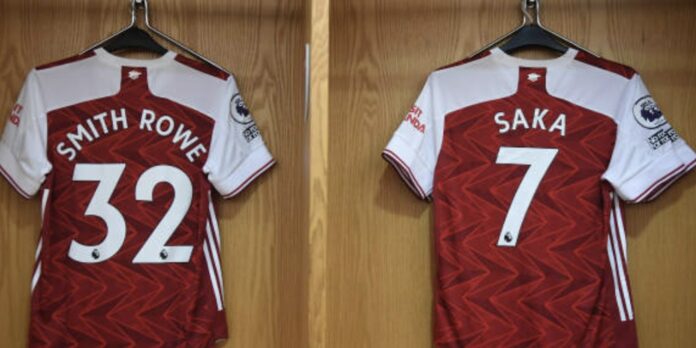 20′ – Smith Rowe charges down the right, plays a pass inside to Saka who is fouled. Arsenal have a penalty. Lacazette makes it 2-0.

24′ – Smith Rowe springs into life in midfield, Arsenal work it well to Saka on the right. He cuts inside and his unerring finish makes the goalkeeper look like a statue – not even one surrounded by police for no good reason. 3-0.

“How they behave, the passion and the commitment they have for the club and how much they love to play football.

“You have to let them express themselves and you have to give them certain room to work, and some ideas of how they can exploit their qualities.

“Then it’s up to them. I thought both of them were really good today.”

It’s hard not to look at these lads and see the future, what an impact they both had on such an important game.

The performance level wasn’t lost on Saka either, who told BT Sport afterwards, “I think it shows everyone how exciting we can be and what we can do. I think we’re such a great team and when we play like this it’s so amazing to be involved and I’m sure it’s amazing for our fans to watch.

“We just need to not make mistakes, silly mistakes and stuff. We have a great chance of going to the final and winning this competition.

“It’s really up to us, we have the quality, we just have to show the performances and the game management like we did tonight.”

Arteta: Fan welcome would be great

ESR has earned a proper number.

Saka already owns the No. 7 shirt and almost the team.

Awesome job by all involved in the academy in producing these two and the others coming through. This has been years in the making.

So when Odergaard is fit, how would you setup?

I think Odergaard could easily fill Ceballos’ role in that setup and actually improve on it.

Very true. Planning ahead, I like it…..mind you, with Luiz out injured we might be ok to plan for having 11 for a while..

Ah, I forgot ESR he’s obviously the #10 role in that setup (it’s missing a player)

Did you know, “MØ” is the sound the cow makes in Norwegian! No joke 🙂 Stop calling him MØ!

Where did you put Alexandre lacazete

4 goals in 2 matches though, and He’s currently our top scorer. He’s our best striker in tight quarters, has the best touch and combination play, and links up very well with the young ones. Add to that all of the tales from inside the club about how much of a mentor and leader he is. The difficulty is he and Auba no longer combine very well. I get it, we’ve got one more older striker than is ideal, and we just signed PEA to a new deal. But man, that’s a tough call when you look at the season’s… Read more »

I think they’re all pretty interchangeable. Saka can play on the right, central and on the left. Odegaard on the right and central. ESR on the left and central. With Pepe (left or right) and Martinelli (left) to rotate in, there are a lot of potential layouts that should work well. So we should just go with form, fitness and if we can spot any potential flaws in the opposition defensive setup that one particular setup could exploit. Our strongest setup will vary throughout the season. It’s good to keep the opposition guessing I can only really see Odegaard in… Read more »

I may be tempted by 4-1-4-1 – that way we can get ESR and Martin in the starting lineup. And they can alternate dropping back to support Partey when needed.

Perhaps, but I think that asks a lot of the sitting midfielder and consequently the defence. You can always play ESR left and ODG central and ESR will naturally drift into the middle to combine with ODG while Tierney provides the width I think Wenger tried the 4-1-4-1 in like 2014/15 by pushing Ramsey/Wilshere right up towards the forward line along with Ozil. It worked alright against teams we had a big quality advantage over, but against well organised sides with decent counterattacking players we were taken to the cleaners many times over. Arteta was our sitting midfielder then I… Read more »

What I was trying to say is just replace Ceballos with Odegaard in the current lineup. Play Odegaard a little deeper than he has been a AM, but similar to Dani in his current role he has license to get forward. IMO he’s clearly an upgrade over Dani.

Viv the 🐐
Reply to  Daveo

I think ESR would be the one partnering Partey. Odegaard should be further up the pitch to get that last pass flowing. ESR is better in doing runs, turns and little passes and securing the ball. It would be a very offensive 4-3-3 to say the least.

No idea what will happen with Ceballos come the end of the season but i’d give ESR a new long term contract and the number 8 shirt. Let’s keep the number 10 shirt for when we announce MØ on a permanent deal 🙂

Is it too soon to offer ESR a new long term contract? Get on it Edu!

Never too soon! The man is an absolute star!

So important for fans to have academy graduates in the team. And these two look really special. Absolutely love them!

We all know Saka has no ceiling as of now, but some of the things Smith-Rowe does on and off the ball are unbelievable. His ability to find space in readiness for a pass, ability for a sudden change of direction to bamboozle the opponent, burst of pace and knack for the nutmeg; how can you not enjoy working with that? For me, it shows how important our academy management is, in terms of teaching our youngsters the value and stature of Arsenal, teaching them what to expect from opponents from a really young age. Of course Saka and Smith… Read more »

Yeah, I have been thinking of that forward line of the future. Gaby’s direct play would be well balanced with both ESR and Odegaard supporting and Saka offering his perfect balance of ball retention and direct threat. Watching that run from Martinelli last night was a thing of beauty and is exactly why we are all salivating over his potential, add to that his workrate…oooff! Priorities for the Summer should be: Another midfielder (Ceballos will leave so we need to do this for numbers along, but if we could get another quality mid to legit challenge Xhaka for his place… Read more »

I agree but a report from Spain today suggests Odegaard will not be put up for sale in the summer after all and that he is now (presumably, in part, on the strength of his performances with us) one of four “untouchable” young players at Real Madrid – along with Vinicius Junior, Valverde and Goes.

I think we’ll have to wait and see what happens in the summer before getting our hopes up too much now. Of course, we certainly would want to sign him if we could but, unfortunately, it’s not down to Arsenal.

Yes, it wouldn’t surprise me. I think our only real hope is him agitating his way out. But it’s unlikely. ESR has developed beautifully, but Odegaard has shown we need more than just ESR (backed up by Willian – yuck) as that technical style AM/Winger – so likely the hunt will continue.

Marca makes shit up all the time, they’re even worse than british sports media. Honestly if Zidane stays I don’t think he’ll want to warm the bench at Real. And they need to sell so I honestly beleive it comes to wether Odegaard wants to stay here or go to another team/league

Agreed! And add in the mix Pepe, and potentially Balogun…

I like Laca but I would still prefer to sell him in the summer, to give our youth a real chance. Cherry on the cake, his recent performances might improve his value.

yes Pepe is a few years older than the Hale End boys but he is every bit as exciting a talent – if he can keep improving like he has done this year, he’s going to be ferociously difficult to stop

The Kids Are Alright!

This is what we’ve all been crying out for all season. More action for ESR, Martinelli, and even guys like Holding and Chambers. Once Odegaard is fit, there is simply no justification for giving Willian any minutes. We have enough options and they ALL bring more to the table in terms of winning than he does. Same with Luiz, he isn’t the future, he can and will cost us a game at any given moment, and he’s not better than Holding, Gaby, or Mari so why play him?

If only we can replicate this performance in the EPL, who the f*ck is city?

Smith-Rowe in the centre is way more effective than on the wing. If we can’t get Odegaard in the summer, I won’t be as disappointed as I should be.

He’s great in both roles. He’s just a fantastic talent who has an exceptional work rate and gets the game.

Yeah I think I actually prefer him through the centre to Odegaard. I’d say Odegaard is probably the more gifted player, but the team seems to function better with ESR there as he gets about the pitch a bit more and takes up more varied positions, plus he and Saka just have a great natural link up

Yes, and as it doesn’t look like RM will be selling Odegaard after all in the summer any potential decision about which player to chose may be irrelevant now.

Even with ESR we should get a replacement if we are not able to get Odegaard. A left back and a attacking midfielder are priority I would say. I have no idea how AMN is doing at West Brom, if he can slot in midfield it would be great.

Just a thought by Xhaka playing at LB he’s opened up his position in midfield , not everyone’s favourite but he has done a good job partnering Partey and two good games at LB , decisions for MA to make in the future .

We either sell him or give him and Partey some proper competition / back-ups. Elneny and Ceballos aren’t good enough.

Ceballos has been good in the last two games.

He’s too inconsistent. And he wasn’t exceptional, just good solid games, but they’ve been too few and far between. Unless he could be had at an absolute bargain basement price and come in as a rotational piece, I think Dani’s time at Arsenal will be up. Even as just a rotational piece pickup, it seems like the wrong idea, as we need upgrades, not lateral moves.

I watched the RM Liverpool match the other night. No way Ceballos ever touches the pitch for RM.

MO could, but man their midfield was killer. It is my hope that MO prompts a move to us and Dani says goodbye.