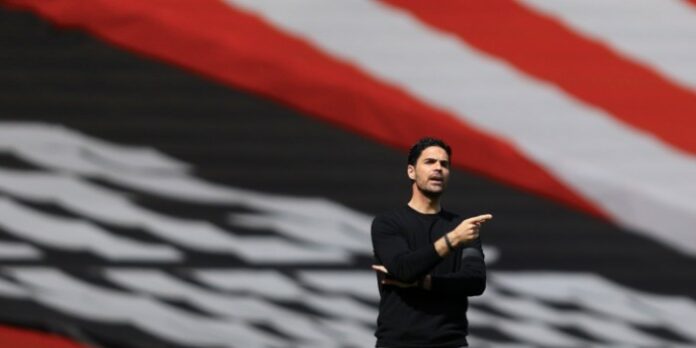 Mikel Arteta admits Arsenal should have beaten Fulham but tried to put a positive spin on two dropped points by praising the way his players snatched a late equaliser.

The Gunners fell behind midway through the second half to Josh Maja’s penalty – awarded when Gabriel stepped on the toes of Mario Lemina – and had to wait until the eighth minute of stoppage time to get on the scoresheet.

Eddie Nketiah pounced at the back post after Alphonse Areola kept out Dani Ceballos’ deflected strike. VAR, which had earlier ruled out a header by the Spaniard, allowed the goal to stand after Rob Holding was adjudged not to be in the keeper’s line of sight.

While a point stretches the Gunners’ unbeaten run to four games, it was a frustrating afternoon for Arteta with striker Alex Lacazette limping off with a suspected hamstring injury.

Facing the Sky Sports cameras, he said: “We started really well, controlling the game and creating chances, scoring a goal that was disallowed, in a very disappointing way, we kept going and didn’t allow any shots on target and suddenly we concede a penalty and the game changes completely.

“We took risks in the right way, we could have scored three or four, we totally deserved to win the match but put ourselves in a difficult position.”

Eager to put a more positive spin on things given his side’s impressive victory against Slavia Prague on Thursday, he added: “We have to just focus on the boys playing away in Europe and arriving here with the desire to go all the way to the 97th, 98th minute.”

Whether Arteta will be able to call on Lacazette in the coming weeks remains to be seen. The Frenchman seemed to be in considerable pain when he pulled up with 20 minutes remaining. Given the Gunners are also without Pierre-Emerick Aubameyang, who was hospitalised last week with malaria picked up on international duty, the boss may have to rely on his youngsters to get goals.

“He felt his hamstring so we don’t know,” said the boss about Lacazette’s issue. “We have to rotate players, we have players who didn’t recover from the game on Thursday. That is the risk. You cannot change those players every game.

“We had 16 shots, probably not enough on target, goals disallowed, a post, that is the difference, you have to win this game.”

My only hope is that the Laca injury gives us a run of games to play Auba in the centre and put pace and youth around him.

Sometimes the best discoveries happen because of necessity.

I think we’ll see Martinelli or Nketiah leading the attack vs Everton in a few days and as you say hopefully Balogun will get some minutes off o& the bench.

Shouldn’t risk your only available first choice striker. Even xhaka should have had a breather. Mix it up with youth a bit. Even have bolagun and nikolaj moller on the bench.

Just don’t do the same shit. That formation change was dire. We had around 4 players parallel to their defence only receiving crosses from Saka.

Gabriel isn’t a calm presence. Has that koscielny vibe where he can have a brilliant game with a calamitous mistake.

Arteta has to learn faster, be braver and more ruthless since we know he won’t be fired.

I’d like to see moller too although it’s not going to happen. I think he’ll prove to be more talented than balogun in the long run

Good to have a selection to choose from though.

I see a lot of conflicts in fan base with people not understanding concept of fatigue. Glad that you got it spot on and considering the changes, I believe we played well.

We may have played well if you look at possession, shots etc. but there are no prizes for that. It’s results that count first, last and always and at the end of the day we couldn’t have come closer to losing that game, could we?

Created chances, and could’ve scored 3/4?! Arteta must have watched a different game to me

Agree with him, We had more than 3-4 clear chances to put this game to bed. Don’t know which game you watched!

Martinelli missed 2 good chances in the first few minutes and we had several other chances and credit their keeper too. Good goal disallowed and victims of a joke penalty. Yes Arteta was right and I saw the same game as him.

martinelli very unlucky today. once he knocks a couple of goals in i can see him being a very regular scorer with the positions he gets himself in and his ability to manufacture a shot out of nothing.

As long as he’s trying to put any kind of spin to events, he’s in delusion and we’re not progressing. Arsene was lying to himself and us for years, then emery and now we have another guy like that. Don’t like it.

Blogs perceived this as spin and it is opinion of blogs that he is putting a spin. You decide on your own what he was trying to do there. IMO, he spoke fine, little more positive than expected but that’s okay.

Should have started with the strongest team then bring on the reserves when you are home and dry. Common sense.

It’s true that we were fed a diet of reduced expectations (dumbing down really) under Wenger in the latter period. While there may be a prospect of success in Europe this season once upon a time we wouldn’t have given the EL a second thought.

League table doesn’t lie. We are bang average for 80% of the time.

We had 70% possession, 18 shots with 5 on target. Scrambling for a point at the very end (literally) just isn’t good enough, is it.

Another injury piles on the pressure for the EL semi-final. It’s not just all our eggs in that particular basket, it’s the farm as well.

That could even be the last we see of Lacazette if they don’t offer him a new deal. What a great run he was on recently.

We will sell him likely.

It won’t be wise to have both Laca and Auba.

Frankly we should have sold Auba at a high price instead of renew. And re-invested in Odsonne Edoard to eventually replace Laca this summer.

Again Edu and Arteta made a huge mistake.Inexperience and a bit of hubris.

Laca was always the better player to keep bc he is more combative. Auba is poor in most circumstances leading the line, better profiting off someone like Laca form the left.

It’s a game of fine margins. 18 times out of 20 we’d probably have won that. We weren’t brilliant but Fulham were worse but a bit luckier with VAR.

If Arsenal were only slightly better than a soon-to-be-relegated team, we shouldn’t really be coming to the team’s defense, shouldn’t we?

It shouldn’t have been a game of fine margins.

Will be a massive blow to europa if he is out. He was good controlling the ball and feeding Martinelli for the first close attempt on goal. He’s been important as a node to move things around, has been quick to give and go on players like Saka, and Ceballos (who pushed further forward on left side today). This has been much needed. Nketiah can get a look in with 6 league games to go (and of course there is Auba) but its the way back in to Europe in europa that is an issue now. Hoping for the best… Read more »