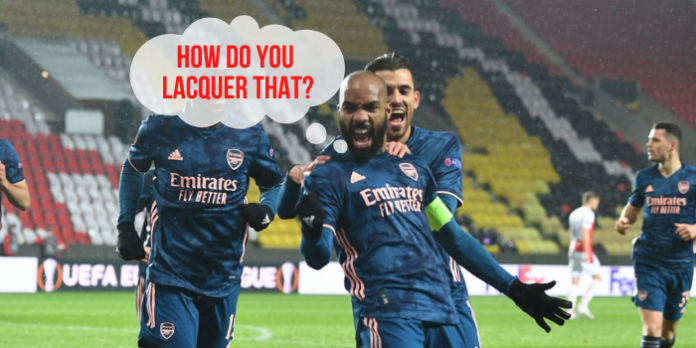 Mikel Arteta was enamelled with the way Arsenal brushed aside Slavia Prague as his players rollered up their sleeves to paint the Czech capital red last night.

Walking on eggshell after the first leg, the Gunners made a blistering start. It was all killer, no filler.

Despite Emile Smith Rowe’s primer being ruled out by VAR, the Gunners netted three times in six minutes to render the tie dead before half time.

There was no flaking or fading after the break. Instead, Alex Lacquerzette added a gloss to proceedings with his second of the game. The Frenchman, on a hot streak, showed real colour instinct.

After his players found a way to solvent a tricky problem against an abrasive opponent, the boss said:

“I am really pleased because we are through and I think we are through in a really convincing way. In this round, 4-0 isn’t easy. They haven’t lost at home in almost two years and they are a tough opponent, but we had some big individual performances and then collectively we understood the game really well and we were very efficient.

“In Europe more than any other competition, games are decided in both boxes and we were ruthless in both of them. We kept a clean sheet and we scored four goals and could have scored more.””

Emulsions ran high before kick-off as the Gunners took a knee to protest against racism in football.

Prior to the match, Slavia’s Ondrej Kudela was banned for 10-games for ‘racist behaviour’ towards Rangers’ Glen Kamara; a former Gunner.

“They asked me and the club that they wanted to take that initiative,” said Arteta.

“They had the right reasons for it, so the club was very supportive. I think it was a good gesture. We spoke with the club to make sure we could follow the rules of Uefa and we can do it in the right way.

“We decided to take that approach, which I really like from the players, and I must say Uefa was very supportive as well. The captains came to me and asked me to do that, and I just supported them like the club did.”

Have we reached our ceiling for the season? Gunners fans will be hoping that isn’t the case given we now face a blast from the pastel; former boss Unai Emery.

There’s no skirting over the issue, the clash with Villarreal is huge. Our Champions League hopes could varnish into thin air.

“We’re [now] going to face an opponent that has a big experience in European competition,” said Arteta.

“And a manager in Unai that has won it three times and is probably the most successful one in the competition, so we will look at them and see how they do, and after that, be us. We’re going to go there and be us.”

Successes in Europe have been hue and far between in Arsenal’s history. It’s a 27-year etch.

Perhaps we’ll right that this year. When Dulux in… 😜

That is some strange writing blogs.

Not if you read this in the ebening.

It’s the other Andrew.

All in all, it paints a positive picture

We’ve really spackled over some of the cracks that were beginning to emerge in the team. Hopefully we can seal the title and plaster that success all over the history books.

All that’s left to do, is to paint the town red (and white).

Perhaps we’ll right that this year. When Dulux in… 😜 – Hahaha

Ps – I love ESR and Saka so bloody much, amazing work Arsenal academy! Such exciting talents!

Is that a Dulux reference for the sp*rs fans on here?

See if you can find the 14 others before you get to that line. And the seven that come after it.

I love how proud of it you are too. 🙂

Spotted that too. Very subtle.

Loved the way Saka cut in from the left last night. No masking his talent

We just brushed Prague aside

This is the kind of performance we all wanted to see. Slavia may have had an extraordinary season but in the end they are the team they are and we had no reason not to bury them yesterday.

Onwards to Villarreal and a rendezvous with the old boss! Let’s dispatch of them too and then we’ll reconvene in old Danzig!

Goes to show all my worries were i – matte -rial

Think I’ll give it a miss though

Gotta believe there is a Gooner working either at Dulux or the company that handles their social. Brilliant trophy case shot.

it was awesome! And reading some of the spuds fans comment was just priceless. One said ‘even our own fucking sponsor is taking the piss out of us now’ 😆

If there is one thing that made me happy yesterday, it is the future gradually unfolding before us.
Saka, ESR, Pepe, Martinelli, Tierney, Holding, Gabriel, Partey, Chambers, will play together for years to come.
Balogun, Azeez et al, are waiting on the wings.

An astute use of the next two transfer windows will turn Arsenal into a real force in English and European football.
I wish we could re-sign Emi Martinez.
Arteta should be fully backed.

An article that really doesn’t need a second coat, in a season that’s been not unlike licking sandpaper. Well played.

You really take the Crown with that post , the paint company the spuds should turn to next is Fallow and Balls.

I think we payed with the white spirit!

Nice portrait of the game Blogs puts a whole new landscape on our season from here on in ! Thought Dani was a bit lucky not to get a primrose yellow after ragrolling around after a brush with their defender ? Never mind though it’s glossed over now ? Excellent points made Blogs & I deffo second that emulsion on ESR and Bukayo we love them ! Praise where it’s due too as Granit kept the lid on it last night no stirring up unnecessary trouble Good also to see a fitter Lacka he’s deffo thinners than he was at… Read more »

I’m hoping this isn’t a performance we gloss over and the result leads us to bigger and better things. Hopefully this won’t be a season that fades into history and we will be Crown(ed) champions

Got to be paintful supporting Spuds

27 year “etch”. I was willing to bet that Andrew Allen (assuming that’s @AAllenSport) did not expect that performance last night. And was hungover when he wrote this. Or so I thought.

That article certainly “paints” a nice picture of the match

It’s all on paint then

That whole Spuds debacle with Dulux is unreal, you could almost call it……… a shaggy dog story! sorry (not sorry)

May have glossed over the Artexta there

We certainly didn’t just Pepe over the cracks