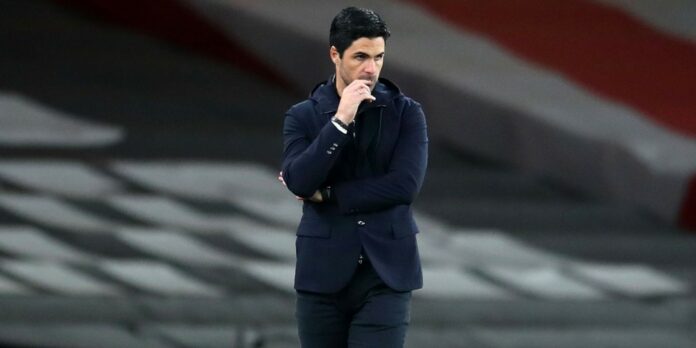 Mikel Arteta has called on his players to show efficiency in the final third with Arsenal facing “a real battle” when they take on Slavia Prague tomorrow night.

The Gunners head into the Europa League quarter-final second leg still smarting from last week’s 1-1 draw after creating enough chances to put the tie to bed before conceding a stoppage-time equaliser.

Arteta knows his side can’t afford similar sloppiness in the Czech capital if we’re to keep our chances of qualifying for the Champions League alive.

Facing the press on Wednesday morning, he said: “We said before the game that we’d been really impressed with the form, with what that team transmits, a real attitude and desire that they show in every single game.

“That’s why they are here, because they’ve knocked out some big teams along the way and fully deserve to be where they are. They showed in the first leg against us that they never give up, and they scored in the last minute of the game. We’re going to have a real battle tomorrow.”

Out of the domestic cups and currently labouring in ninth place in the Premier League, it’s clear that success in this season’s Europa League is now our best chance of salvaging a season that was supposed to mark a turnaround in fortunes. The pressure is on.

“It’s very important for us and this is our club,” said Arteta. “There’s no individual interest, it’s all a collective interest that we want to do well in every competition.

“Tomorrow’s game can put us in a position to go into the semi-final of a European competition. This is exactly where this club has to be and that’s why tomorrow we have to do our best to earn that.”

Put to him that a European semi-final would at least mark tangible progress to onlookers, he added:

“Absolutely, tangible is the right word and the only tangible thing is results. Whether you’re doing a good job or not, to judge it externally is only going to be judged with results.

“Internally, you know what you are doing and you can have many different ways of judging that but at the end of the day, externally results are the only important thing to give the perception that we are moving forward in the right direction.”

While it remains to be seen whether Pierre-Emerick Aubameyang and Martin Odegaard travek, the Gunners were at least boosted by news both Emile Smith Rowe and Bukayo Saka are fit. So important on the creative front, the duo will likely carry the weight of supporter expectations on their young shoulders. That said, the boss is keen for all his players to be ready to step up and deliver.

He added: “We had moments against Slavia where if we had put the ball in the net, we are having a different conversation.

“This game is decided there and then when you don’t win, and you draw in the final minute, it leaves a different taste. But it could have been a completely different game. It’s about efficiency and in these Europa League games, your efficiency has to be so high to have the chance to compete with the best.”

Saka, Smith Rowe and Martinelli with either Laca or Auba up front… please!

Tombo
Reply to  A Gorilla

if its cedric lb then i would go pepe on the left saka on the right. Martinelli can give us impetus off the bench if needed. He can change a game on his own more than Pepe could off the bench imo.

Problem is Artetas substitutions are too late…..Martinelli starts.

Pepe has looked tasty from the left, would love to see him played more there.

Please just try to send them out to play on the front foot at maximum intensity. Forget patience and ‘game management’, it all goes to shit whenever we attempt to play that way. We’re at our best when we play instinctively.

We score 2 goals and they’ll need 3, which they won’t get because they’re a Championship level side

just the one Willian then?

1 Willian is about 3 too many

They definitely are not a Championship side. In the first leg they didn’t play well. But that’s not the football they usually play. If they play to their standards Arsenal could be in trouble. Even the lineup was really just glued together in the last moments. E.g. Holeš (the goalscorer) has never played CB before. It’s still unclear who’s gonna play tomorrow but if they manage to get some injured players back and play a full strength team, then it could very well be a very different match. If Arsenal underestimate them as a lot of fans do, then they… Read more »

Definitely not a championship side. I put them on a level with Premier League teams like Everton, Wolves, Leeds and Aston Villa. These are teams that can and do beat us – but they are also teams we are capable of beating if we are on our game.

Individual quality wise they are definitely Championship. Maybe organisation wise and confidence from their run elevates them to a relegation candidate PL level. Either way we can sweep aside teams like this if we play to our strengths. Just because you have respect for what an opposing team can do, doesn’t mean being fearful of them and playing in a standoffish, self-limiting way that negates your strengths – Arteta’s default mode it seems. They’re like a spider – they have far more to fear from us than we do from them I admit I don’t know how they managed to… Read more »

They managed to beat Leicester because they were the better team. Vardy was completely deleted from the game. Leicester had like 2 decent chances. You are saying their players are championship quality. Well, look at Coufal and Soucek. They are an integral part of the West Ham team and look where West Ham is and where Arsenal is. Of course Arsenal should have better players on paper, but football is a team game. Individualities don’t usually decide matches, teams do (except for the likes of CR7, Messi etc.). Arsenal are obviously still clear favorites but I wouldn’t be too surprised… Read more »

Seriously, I don’t get all this “championship level” stuff. Even though they weren’t at their best they still created plenty, we created a lot more and should be out of site, but surprise surprise we’re not. We need a huge performance to win this. I’m hardly confident.

I hope he’s wrong, but I suspect it could be a battle. We’re already getting posts elsewhere suggesting that we could win easily – just like before the first leg. I think we will get through but we all know by now that you can never be too sure what will happen with this Arsenal team.

Nothing is ever certain in football generally but with successful teams (which we aren’t currently) you have a fair idea what’s likely to happen most of the time – we don’t have that luxury.

The one thing I’m certain about is, it’s going to be very nervy for the players and us.

It’s a case end justifying the means, as long as we get through tomorrow.

The lads have to be fired up for this one. There’s no excuses for them not to give their everything tomorrow night. COYG

I’m sure we all agree with that. I just wish they had been suitably fired up for the first leg (particularly as it was the home tie). Unfortunately not.

If we turn up & play anywhere near our best, we will almost certainly win. The question as always with Arsenal is will we turn up….

If its going to be a real battle we should definitely use Halberds. According to the youtube videos I have been watch they are the best.
Of course if Slavia deploy a formation of missile equipped killer drones we could be in trouble.
Its a tough one for Arteta to figure out.

Much rather prefer fake battles. If it’s going to be a real battle, it should old style with swords, horses and elephants.

Watching PSG v Bayern last night I kept thinking how far Arsenal are from them. The gap is bewilderingly huge, and won’t be closed that easily. There’s just lot more then simply picking the right players, or management. It’s about club’s culture. That’s why I cheer the youngsters from our academy. They are out future. Willian and co.can provide short term fixes (as if). So from that view point, it doesn’t really matter whether we go through tonight. Maybe, just maybe, it would be better to give kids space next season, and not to worry about “success” at all. I… Read more »

Please do not start Auba on the left. Please.

Asides from that, excited for the game. Pretty certain we’re going to be fully fired up and play some good, attacking football.

Every game in the Europa League is a cup final. If the team is not up for it tomorrow, or show lack of focus, then they never will. tomorrow we separate the men from the boys.

Mikel sort of said this after the first leg — I’m not sure if he meant it the way I’m going to — but the fact that we know we have to score a goal could be a better mindset than if we went it to it just trying to preserve a 1-0 lead. Obviously it would be great to be a goal up, but this team always looks better when they’re playing with the urgency of needing a goal than when they’re just trying not to concede. See the last 10 minutes of the NLD or leg 2 vs.… Read more »

Partey in the back
Reply to  Bryan!

Andreas
Reply to  Partey in the back

NO AUBA or PEPE in this crucial match please, they are too mediocre.