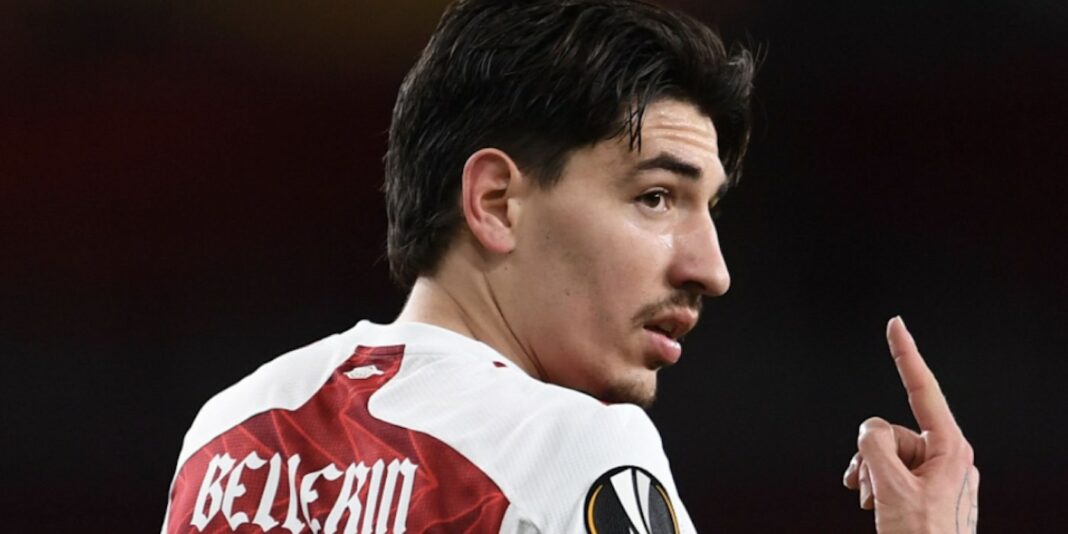 Hector Bellerin tried to put a brave face on last night’s disappointing 1-1 draw with Slavia Prague, insisting that he’s not overly worried about the second leg based on the chances Arsenal had.

However, he’s acknowledged that making mistakes and not taking chances will make life difficult for us, and that has to improve next week when we visit the Czech Republic.

Bukayo Saka, Alexandre Lacazette and Pierre-Emerick Aubameyang all spurned chances to put the Gunners ahead, and even after Nicolas Pepe’s excellent late goal, poor defending gave the visitors a valuable away goal deep into injury time.

The full-back questioned the way we handled things, saying, “I think when you put yourself 1-0 up there’s better ways of managing the game in the way we did and as players we take the responsibility.

“You can blame it on anything you want, but at the end of the day it comes down to the goals we score and the goals we concede, and I think throughout the game we put ourselves in situations that we could have taken the lead, but this is football.”

However, Bellerin has a positive outlook on the second leg, a game which will decide if our season remains alive or not.

“It’s difficult to take,” he said, “but at the end of the day there’s still everything to play for and it’s 1-1. We know how they play and I think we had really good moments in the game.

“We broke down their pressure and we created chances, so there’s nothing that worries me for us to go to Prague and do the job there.”

We all realise this is just soundbite stuff for the media, because it’s obvious there’s plenty to worry about, but hopefully that positive attitude goes some way to getting the result we need next Thursday.

Arteta: Fan welcome would be great

Just in case that Arteta wakes up feeling so awful that he decides to read Arseblog news to cheer himself up I would like to send him a message… Pepe is a striker – He always was. Lacazette is not a striker – He used to be. Willian is not a left winger – I don’t think he ever was. Abubameyang is a striker – No, he honestly is. Think about that for a few minutes. Try and let it sink in. If you want I can get paid $20m a year to see the blinding obvious. But seen as… Read more »

He doesn’t get paid that much. That’s why he got the job.

To a point, but I don’t think that’s the whole reason. If an Ancelotti (say) had been available, and wanted to take the job, I suspect we would have offered it to him. Everton pulled off a real coup getting him. The problem was that the club had been in decline for a few years, starting under Wenger of course, and money was/is tight (relative to other “big” teams) so we weren’t that an attractive proposition. Also, the “old boy” factor played a part – former player etc. returns, blah, blah. As a result, we got someone with no managerial… Read more »

Lacazette was a £50 million downgrade on Giroud Due to his wages and decimated transfer market, we’re probably stuck with him for another 14 months So there’s always that to look forward too And if that’s not enough to get your juices flowing, we’ve got another 26 months of Aubameyang + Willian Arteta will only last until November at the latest, once fans get back in the stadium, he’ll likely be sacked Then Vinai + Edu can appoint our new manager, fans can declare that the new guy needs 4-5 transfer windows to turn things around, every decision he makes… Read more »

Manager shouldn’t need 4-5 Windows.,it’s the football director who plans the recruitment, direction and style of play of the club, and then bringing in tactically astute manager. Edu gotta go

Arteta looks like a junior coach who overthinks and overcomplicates games now. We have pacy players like Auba, Saka, Pepe, Martinelli. Just play direct and destroy their press, it’s not like we are playing Bayern, City or Liverpool. He’s had a rough time managing the club during the pandemic, but on field results aren’t good enough. I wonder if the board even have the balls to warn Arteta he needs to deliver immediately.

Stability and patience are virtues …

Why do I feel constant negative energy flow around this club? I mean I don’t know. We haven’t seen the boys live for almost 14 months now, but the body language doesn’t lie. Just try to recall the content of Mikel’s and the lads interviews from the past months, the way they express themselves just tells me they are full of unreleased negative tension, they are in a mental trap and I don’t really understand why no-one in this club handles it as seriously as it actually is. We are cursed. We are in a negative spiral. One step forward,… Read more »

I would look t it from the opposite perspective. These players have become so used to operating in a Wengeresque crèche environment that they genuinely believe they are doing enough to justify their positions. Add to that the fact that there is no crowd to get in their back, and indeed that of the manager, and you have a recipe for the kind of stale, listless rubbish we have been served up with.

Desperately looking for straws to claw.

Arsenal is a big team on paper.

I don’t think we are. Not to the person who matters. We are a nice distraction from the much bigger clubs who play real sports like NFL and Basketball. Arsenal are nothing more than an investment. An investment where results don’t matter. The only prize from this investment is a European super league paying gazillions in TV money and a guaranteed place at the trough for all the greedy bastards to feed on. If that doesn’t happen we will be dropped and left full of debt to be picked up by a dodgy prince on the cheap to give his… Read more »

Let’s not forget neither Leicester or Rangers lost their 1st legs in Prague both were defeated at home in the 2nd leg. There is always hope.

One of the most frustrating things about the team right now is it’s inability to keep clean sheets. How many bad goals have we conceded this season? The last time we won a European trophy we had the meanest defence in the club’s history. Today we have a side that actually invents ways to give away bad goals. My biggest criticism of Arteta is that he’s failed to tighten up the defence. In European football a 1-0 win at home is actually a great result: the golden rule in Europe is “keep a clean sheet at home”. Then score away… Read more »

Maybe Hector can help in trying to break them down next week by getting involved in the attacking third.

Blah blah mental strength, blah blah whole team is together…. blah blah I or king hard…blah blah.
Walcott is gone but the same meaningless post match platitudes get wheeled out, just by different players. I guess it’s because we are all too stupid to see through them. Or that the players are not being called to account either by the manager or the crowd.

I thought Bellerin was our best player. He consistently advanced the ball with quick combination passes; we were never under serious pressure on his side, unlike the left (despite Holding’s, compared to Gabriel’s, slowness and lack of mobility); he regularly put Saka into good attacking positions. That doesn’t mean he always made the final pass that freed Saka in space (though he made some of them) but it was his running and passing that opened the area for Saka–in other words, he did some of the work of the absent Odegaard.

jiggernaught
Reply to  Once a gunner

you’re absolutely right to get drunk at noon, cant blame you

Aaron
Reply to  Once a gunner

Wow. You are wrong though.

hector is likely a player we’ll be looking to cash in on this summer, as the vultures circle the club looking for bargains from a side on the decline. investment and coherent recruitment are needed, and right now we have neither the ownership or the infrastructure to accomplish this.
kse could prove me wrong, of course, but the likelihood of that is slim.

I think Bellerin is indeed one of the players that other clubs–big clubs–will try to buy. Maitland-Niles, Willock, Nelson, Eddie are English and worth more to Prem sides for that reason, but I don’t see any of them in the starting eleven at a top club. I don’t think there’s any doubt Bellerin could start at PSG or Barca.

Not worried we will get pass Slavia next game, semi might be tricky but final v man u is our likely outcome, if we don’t pick up injuries another trophy looks very possible & our entry to CL, ok our worst game for a while v Liverpool but we are not so bad, glass half full, keep the faith, unlike our neighbours we know how to win things .