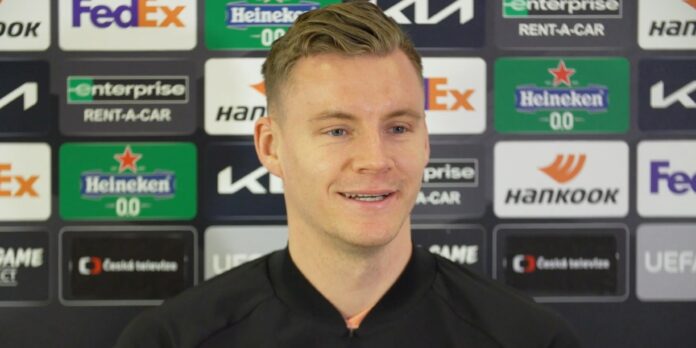 Bernd Leno thinks Bukayo Saka has been one of Arsenal’s best players this season and has praised the youngster’s professionalism.

While the Gunners have struggled at times this season, the 19-year-old’s reputation continues to go from strength to strength.

The Academy graduate has scored six goals and made seven assists in 37 games and become a full England international in the process.

Leno has been impressed with his development and the maturity he shows on and off the pitch.

“His performances are incredible,” said the German ahead of Thursday’s Europa League clash with Slavia Prague.

“He’s a top player and he has a top mentality. I think it’s very unusual for a young player like him because he’s very professional.

“He feels older than he is because he’s almost leading the team. This is a very good sign. I’m pretty sure he will become a world-class player.

“We are very happy to have him because this season – I don’t know if he’s the best – he’s been one of the best players.”

Arsenal confirmed today that Saka will be available for the trip to Prague despite picking up a knock in Sunday’s 3-0 win over Sheffield United. We’ll need his creativity in what’s shaping up to be our biggest game of the season so far.

Reflecting on last week’s 1-1 draw at the Emirates, Leno said, “I think you could see after the first leg how disappointed we were. It’s still only half-time, though, and you could see how big this game was for us. Tomorrow even more.

On our opponents, he added: “They have beaten good teams in the competition. We dominated them in our home game but you could also see that they are very dangerous on counter-attacks, on set-pieces.

“We know what to expect and it will be a very tough game, especially away. But we also know that it’s a dangerous result for both teams.

“Once we score one goal, they are under big pressure. This should be our target: to score the first goal and then with a second goal we can almost finish the game because they’ll have to score three goals. There’s only one way, which is to go through. Nothing else.”

If Arsenal fail to progress to the semi-finals tomorrow, next season stands to be the first since 1995 without European football. It’s a scenario that Leno wouldn’t even countenance when pressed on the issue.

“When you think of a future without Arsenal in European competition, it doesn’t feel right. Our job is to make sure it doesn’t come true. Arsenal belongs to Europe and that’s our target. That’s our job.”

‘Next season stands to be the first since 1995 without European football’. All good things come to an end.

I want Eduardo, Chamakh, Giroud, Walcott etc., all of them back. Perhaps the first time, the best or star player didn’t deliver since 1995.

We’re not out of it yet, although you could respond to Leno’s comments about Arsenal in Europe along the lines of it’s a pity that we didn’t play better in the first leg then we wouldn’t be in a make or break game -literally – on Thursday. Failure would be a huge blow financially and also for potential signings. Should be up for sale would young Odegaard really want to confine his ambitions for 2021-22 to, at best, a couple of domestic cups? I doubt it really. I think we’ll probably get through but if/when we do, we’ll have made… Read more »

The negativity surrounding this fixture kind of says it all about where we are right now though. We used to go anywhere in Europe (apart from Camp Nou) and believe we could win. Now we are all expecting a defeat against an average to poor European side. Anyone hanging on to the idea that we are somehow a top four side can now finally let the facade drop. Funnily enough I think that we win tomorrow for that very reason. I’ve been an Arsenal fan long enough to know that they do the exact opposite of what we think they… Read more »

Freddie had more games under his belt than Arteta as a Premier league manager. You get what you pay for.

I don’t miss Wenger but that man managed & delivered a top-4 finish for ‘n’ number of years with a squad 5 times poorer in skill set than the current crop. And I am grateful for that.

We complain about the current midfield but Wenger was challenging at the top with players like Denilson.

If only Wenger knew when to move on from the managerial role!

And Wenger bought those players like Denilson, nobody else to blame.

It shouldn’t have been his decision to make. The senior management at the club should have grown a pair and made the decision much sooner (or made it easier for him to do the job by lessening the load). For everyone saying people were moaning about Arsene Wenger getting top 4, that is not the case. People were moaning because they could see Arsenal getting worse and everyone else getting better, and were worried we’d drop out of the top 4. In Arsene’s last 2 seasons, Arsenal finished 5th and 6th. So who was right? Wouldn’t it have been better… Read more »

Score one, then a second. Good plan, didn’t think of that

You want them to score the second goal before they score the first?

A P
Reply to  BongoGooner

And the plan gets blown to pieces if we concede one.

As Mike Tyson said, everyone’s got a plan until they’re punched in the mouth.

In other news, Kudela has been banned for 10 matches.

A M
Reply to  shokim

He didn’t play in the first leg.

Arsenal will go out tomorrow but there may be positives.
Firstly there would be absolutely no reason to keep Arteta on – a manager who has been a complete disaster for this club.
Secondly with the club value currently very high, now would be a good time for Kroenke to sell.
Does anyone want either of these people at the club???

I still think we’re favourites to progress, provided we try to play the game on the front foot and not just passively wait for a chance or 2 to fall our way as we often do I don’t particularly rate Arteta’s performance as Arsenal manager, and I don’t have much faith that he’ll turn things around long-term. But I also don’t bear any ill will for him like we all should for Kroenke Arteta’s doing his best, but was given the job before anyone could realistically expect him to have developed the skills and experience necessary to be able to… Read more »

I know this will disappoint you but WE HAVEN’T LOST YET.

There’s still fight in me and I hope the team shows it tonight too. we can do this. COYG

You talk like your daddy’s in club buying business.

I still want Arteta to continue regardless. There’s plenty to like about his style. Plus, it’s not like we have Klopp/Pep/Zidane/Simeone waiting in the wings.

They’re going to come out of the traps hard and fast and I hope we’re ready for it, they’re not going to let us build confidence into the game, get an easy/early goal

We’ll be trying hard to break the lines to no avail but then in the 59th second of the 59th minute we get a dubious free kick on the centre circle.. the Slavians are furious and protest furiously but the ref does not budge.. Seizing the moment, a young Smith Rowe grabs the ball and plays a quick pass to saka (who had took up a dangerous position behind the arguing players) the ball causes disarray in the Slavians defence. Saka cuts inside and hits a hard shot that takes a wicked deflection leaving the keeper stranded. 0-1 ..after both… Read more »

I don’t want to sound the eternal optimist but, our run-in in the league is decent and we could still finish seventh and sneak Europa. Plus playing once a week would help our thin squad manage those games…
Would much rather we win and go through tomorrow, of course.

7th would be the Europa Conference League

We are winning this match. It’s the semis we have to worry about.