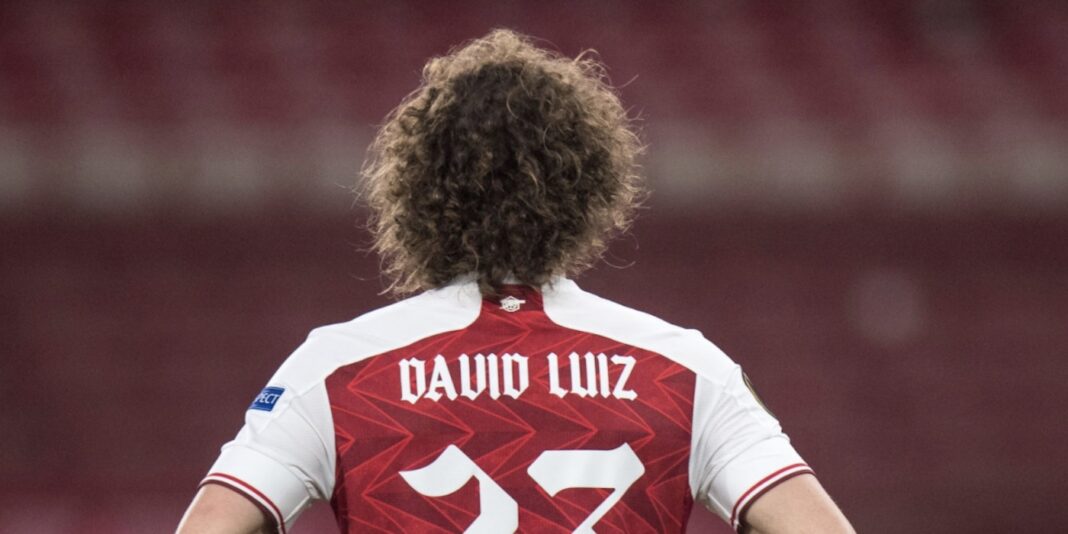 David Luiz could miss the rest of the season after Mikel Arteta acknowledged the defender could require surgery on a knee injury picked up in training.

Arteta confirms to me that Luiz could need surgery. Story to come on that ASAP. He cannot confirm if he will play again this season.

The Brazilian was missing for the 3-0 defeat to Liverpool tonight, and the Arsenal boss admitted there’s some uncertainty about what happens next.

“We don’t know,” he said. “There are a few possibilities on that: being a little bit more conservative with the treatment or having to go through a surgery.

“We are talking with the doctors right now to make the right decision on that. But it looks like he can be out for a few weeks at least.”

Luiz has just a couple of months of his current deal left to run, and this injury may have an impact on his future at the club.

Sources have told Arseblog News it could well be one which ends his season, which would be a blow to Arteta who has counted on the experienced Brazilian, with the 33 year old being a fixture in the side before the international break.

More on this as and when it breaks.

Definitely missed him and Xhaka today.
Anyone who still insists Xhaka isn’t our best midfielder needs to get his or her brain reevaluated.
Need to start appreciating that man more.
We do need players also better than him but for now he’s our best

I’ve been making this point for the past 3 seasons

Xhaka isn’t perfect, but he’s still our best available option, which really highlights how poor our other options are, and why we’re currently sitting mid-table

Losing Luiz is also a big blow, because this season he’s been our best centre half

Which again highlights how bad our other centre back options are, this is another reason why we’re sitting in mid table

Our last 8 fixtures we only play 2 teams in the top half, hopefully we can pick things up a bit

We say this every time we are beaten – the man missing is the best of all time. Xhaka is clearly a mediocre player. He mostly passes sideways or leathers it backwards, but yes, every now and again he will make a forward pass or switch it with long ball. He also has a big tendency to make massive errors directly leading to goals.

Xhaka would never come close to being a starter (or maybe even being on the bench) from 1996 to 2011.

No way Denilson is better than Xhaka and he played 96 games, at least 2 seasons as first choice. Xhaka is and has been surrounded with shit players in all his time at Arsenal. Xhaka is a decent player who shines when surrounded with quality. He’s just not world class like Cesc or Vieria who had that bit extra quality to stand out.

Would be a great race Xhaka Denilson and Jack black. My moneys on Jack black .

Xhaka is our 2nd best midfielder. I’ve scheduled my MRI Head for Tuesday.

Xhaka is the absolute worst player we have against hard pressing teams. It shows off his biggest failings. He likes the whole game in front of him with head up and space and plenty of passing options. The best thing that happened for him was to sit this one out and watch his stock rise. He’s shown us time and time again how error prone he is in these exact games and there is zero doubt in my mind he would’ve been culpable for some horrendous errors. Any worse than ceballos? Maybe not but the same level of being caught… Read more »

Time to get tough and forget sympathy because he is loaded…….do not give him a new contract.

Xhaka isn’t our best midfielder, I insist. Thomas Partey is our best midfielder and by a very large distance. Xhaka should be sold this summer (along with Nelson, Torreira, Nketiah, AMN, Lacazette, Bellerin, Mavrapanos, and probably Willock). Xhaka’s improved with Partey next to him but he is very slow in his movement and also slows the game down too much in midfield with his passing (granted not as much as Ceballos, who should also go this summer). And if you add up all the points Xhaka has cost due to very stupid mistakes, it’s hard not to make the case… Read more »

not wanna insult sideshow louie, but “penis”, in my language, is a euphemism for “unreliable” gargantuan things without impact, such as injuries.

It’s not his penis that needs recovery. At least I don’t hope so.

That was not my tippoint tho

Well, that’s a new 3-year bumper deal for him sorted then…

He’s going to sign it on the hospital bed

We went from no injuries not too long ago to half of our first team injured today, wtf?

This is Arsenal buddy

Yes but also brought to us with much enthusiasm by Interlull.

That was just a Covid glitch

It shows how sorry state of affairs are, when you so badly miss your best two teenagers, the error prone old guy and the mediocre midfielder whose character sums up the whole of Arsenal since Wenger left.

Wenger signed Xhaka. He didn’t become mediocre when Wenger left. He’s always been that way. Attributing that to Wenger leaving is revisionism and doesn’t hold up to scrutiny..

Although Arsenal’s win ratio and goals scored have declined under Emery and even more so under Arteta. The whole team has become mediocre since Wenger left, with only the odd flash of good form. I had held onto the belief that Arteta was capable of turning the club around, but after yesterday I am not so sure.

Well it’s a shame considering he was on a pretty decent form lately, but don’t you dare renew his contract… he’s 33 yo, past his prime, injured player! I wouldn’t even resign him on pay-as-play deal, not to mention his current 100k-ish contract.

Time to move on from him. Allow him to train and get his knee together if he wants, but let him leave.

As it was possible to observe since November this season should have been a flee market for our young players.
AMN Willock Holding Chambers etc.
Play them all and keep the best and sell the rest in order to rebuild.
We on the other hand are trying to rebuild around Luiz Willians and other 30+