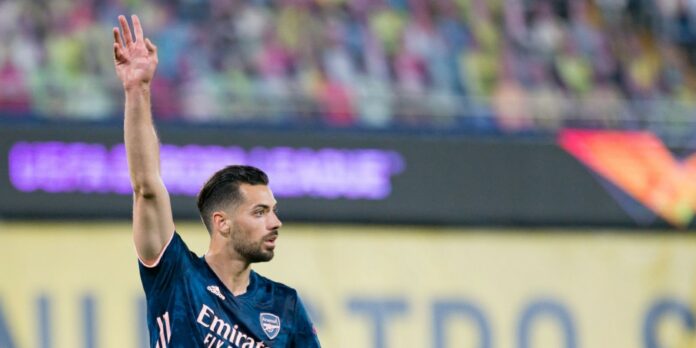 Pablo Mari has called on Arsenal to go “full gas” when Villarreal visit the Emirates next week knowing another sluggish start could end our Europa League hopes.

The Yellow Submarines should be out of sight already having raced to a two-goal lead in last night’s semi-final first leg, however, the Gunners, courtesy of Nicholas Pepe’s penalty, edged back into things even after Dani Ceballos had been given his marching orders.

Mikel Arteta’s side had a chance to grab an unlikely draw when the home side were also reduced to 10 men – Etienne Capoue received two bookings in 12 minutes – but substitute Pierre-Emerick Aubameyang couldn’t convert his chance in stoppage time.

“I think it’s not a really bad result thinking about that we’re 2-0 down with one player less, I think a really good reaction from the team,” Mari told Arsenal.com after the 2-1 defeat.

“But for me I think for me we don’t have to wait to go into that situation to react. I think we have to learn about that and we have to put all the effort starting from minute zero next week to go to the final.”

Like his manager, Mari was at a loss when asked to explain Arsenal’s struggles in the first half.

“I don’t know. At the end, you’re on the pitch and I try to help everybody, but we did some mistakes and I think this is key because they like to play football and they know when you do a mistake to go on that side and take the goals. So at the end, we have to learn from that.

“They only had two chances and scored two goals, we have two and we scored one. At the end, semi-finals and quarters can be decided in the boxes, in attacking and in defence, and at the end, they had more efficiency than us today and we have to change that [next] Thursday.

“We have to go full gas from minute zero and go with everything to win the game.”

Arsenal took a 27-man squad to Spain and opted to stay overnight with a view to squeezing in a training session this morning ahead of Sunday’s trip to St James’ Park.

Given there’s very little riding on Sunday’s match, it’s fair to expect a lot of rotation before Unai Emery makes his Emirates return on Thursday.

So glad the players are still reminding themselves they need to try hard after they lose each game.

Laca admitted a few weeks back that the team frequently weren’t focused. Wtf is going on.

They’re not focussing on being focused. A double lack of focus?

Yeah. Would be nice if they actually remembered to try hard when they’re on the pitch. Especially in the first half. It’s a consistent pattern that they’re off the boil in the first half then come out guns blazing in the second. Arteta must be constantly having to give them a rocket at half time. Maybe he should do that before kick off.

Another sub standard Arteta signing talking as if he is Ramos. Why did we sign this guy, when we had – Luiz, Mustafi, Chambers, Holding, Saliba, Mavo, etc and being linked with Gabriel

He looks better than Mustafi, but is that the criteria for selecting players and manager at Arsenal now?

and then light it.

Unless it’s deadwood. We seem to have a bit of it

No foot Norbert
Reply to  Fuzz

“Hell, it smells like you boys have had enough already….”

Even if we do advance, the worry about the final is that it’s one game only: we rarely get it right on the first occasion.

i don’t agree. If anything, we are a cup team. I don’t relish a final against MU, but if we get there having overcome Villarreal, then I sure will be glad it isn’t a two-legged final.

Oh please don’t! Don’t go full gas, don’t learn from the mistakes and don’t feel like you have to do anything. I’m not even being sarcastic, it’s just that ‘we’ don’t learn and every time somebody comes out and says sth we do the opposite. Wouldn’t have hurt for once to say: You know what, I repaid Mikel’s trust in me with some really shitty positional play today. I’m sorry. We are an average team, we can beat anybody on the day but so can others. Please make it stop. Arteta has not taken us to the next level and… Read more »

Seriously man, even Mari (and I’m assuming the other players too) has let himself be convinced by Arteta that the second half was “a really good reaction from the team”. This is bollocks. We were rubbish in the 2nd half both before and after Dani was given his (just – lucky he stayed on as long as he did as his previous foul merited a second yellow) marching orders. They dominated us all game, we were lucky Leno made some quality saves in the 2nd half (though he shoulda cleared the corner we conceded on), we were lucky Xhaka didn’t… Read more »

This was a great team talk, Daveo in

I think it’s Odegaard’s turn after the Newcastle game.

As Bristol Rovers [now managed by “gentle” Joey Barton] were the first team (other than Sheff Utd) to get relegated this season, Paolo’s clarion call for the boys to go “the Full Gas” may not be the best option…

I don’t rmb us making this rally so often. Its becoming more and more every season but no progress. 1 or 2 gd games follow by 8 bad games. Repeat cycle. Its becoming a norm. How the hell did we allow ourselves to be like tt.

Are “remember”, “good” and “that” really so difficult to spell?

The only way to get more energy in the side is to play Martinelli. For some reason he still cannot get a game.

Arteta would now rather play ESR at striker rather than hand Martinelli the chance.

If you’ve got young kids, don’t walk around the house barefoot.

This guy has been hurt before…

Same old infuriating platitudes. As others have mentioned, every time the team puts in a poor performance players come out saying this stuff. I gues they have to say something but how many more poor performances will our players need so that they can “learn” from them? Clearly, they can’t be learning very much or they (still) wouldn’t be turning in so many.

Yes this sort of crap is just meaningless.. like the serial shagger who keeps telling his wife he loves her.

More repeats than ‘Only Fools and Horses’….

“But for me I think for me we don’t have to wait to go into that situation to react. I think we have to learn about that and we have to put all the effort starting from minute zero next week to go to the final.”

And find it amazing the number of times a team starts slowly and then laments it later. Isn’t it common sense in the majority of games to come out quickly?

“They only had two chances and scored two goals”.

Ummm… they had six shots in target, some of which needed decent saves from Leno. We had one shot on target (excluding the penalty). We probably had more possession in their final third, but pretty rise tinted to think we had the better chances.

Players and managers so often seem to see games differently to us! I guess if you’re actually involved in stopping a chance, you view it differently.

You’re right. The stats don’t back up MA here. I suspect he’s looking at it through MA-tinted glasses!

Oh God, just please stop talking. There is a direct correlation between players coming out with these statements and then having a stinker straight after. The sentiment is obvious and doesn’t really need saying. Just please f’ing produce what you’re saying out on the pitch, cheers
PS… ceballosout

I guess he has to say something but he could remark on the weather, the impressive “Yellow Submarine” kit, anything but “we know we must do better”.

I said it before and will continue, Why is Arteta like a playing Ceballos than Mohamed Eleny, Ceballos is not fitness for Arsenal, imagine without Lucas Torreira, Ceballos is caused of our problems because he never recover and can’t run with opponents only when ball on his leg, his not a premier league player and that’s the lesson Zidane rejected him, it’s only Xhaka who reads him and covers him now Xhaka is at left back, His in ability to defend, If you fail to defend then attack, see how the game changes as Martinelli comes into play, you need… Read more »

In my country when they something is “full gas” that means they’re talking out of their ass. And that’s precisely how I feel about our Arsenal players this season. There’s a lot of motivational quotes like this after defeats only to follow it up with another loss.

Why is it always those players that were the most shit in the game that come out after and remind their teammates to be better? Such a weird team this is.

It is astounding I must admit, looking at the comments to the line up everyone here was waxing lyrical about how excited they were about Pepe starting up front lol! Just shows how much Arteta has lost the plot as no one second guessed he would be deploying poor ESR as a false fucking no.9, seriously WTF? In spite of that when starting line up was revealed I was actually more concerned with how slow our back 4 was especially more so since we had Partey, Ceballos, Odegarrd in midfield. I was asking myself my god this is a very… Read more »

Just to add to the point of pace, he loaned out AMN,Willock, we could have done with Willock as an option on bench last night and AMN would have got lots of game time at LB if he stayed, hell I would prefer either of them over Ceballos he has been dreadful overall this season after such a promising turn in form in our FA cup run last season.

I’ve read my share of after match interviews with players and managers.

And in the next game ? Same slow zombie like start, same stupid mistakes
(and same lame interviews after the match)

Mari my old son, I think you’ll find when it comes to hot air, the manager’s gassing enough already…

I know they get asked questions and I don’t blame them, but sometimes you really get sick of hearing from them and from the manager(s).

Especially when it never translates to the game. Just do it. Or don’t. In silence preferably.

The team cannot help but to start slowly if Arteta gets his selection wrong. Xacka at left-back? Offensively-minded and defensive-error-prone Ceballos in defensive midfield? No center-forward while Martinelli and Nketia sit on the bench?

Arteta chose the wrong time to start 4 players out of position. The blame is squarely on Arteta. 100 percent.